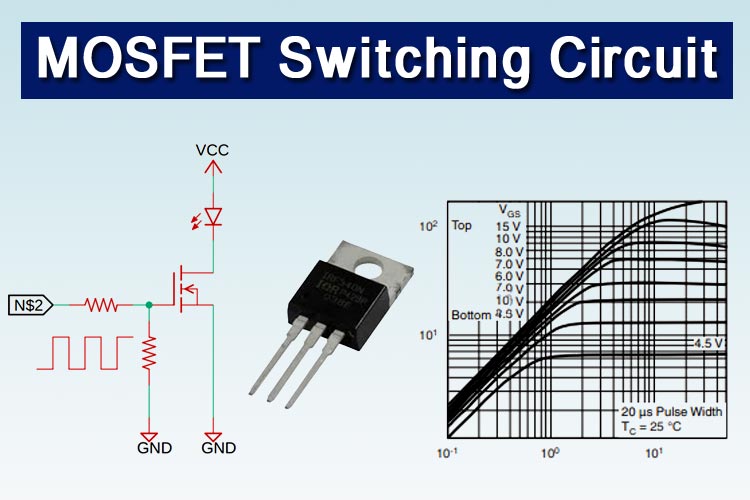 MOSFET is a transistor that uses field effect. MOSFET stands for Metal Oxide Semiconductor Field Effect Transistor, which has a gate. For simplicity, you can imagine this gate as like a water tap you rotate the tap counter-clockwise the water starts flowing out of the tap, you rotate it clockwise water stops flowing from the tap. Similarly, the gate voltage determines the conductivity of the device. Depending on this gate voltage we can change the conductivity and thus we can use it as a switch or as an amplifier like we use a Transistor as a switch or as an amplifier. Ever since the advent of the power MOSFET in the 1980s, power switching has become faster and more efficient. Almost all modern-day switching supplies use some form of power MOSFETs as their switching elements. MOSFETs are preferred for their low conduction losses, low switching losses, and as the gate of the MOSFET is made out of capacitors it has a zero DC gate current. So, in this article, we will talk about different ways to switch on and off a MOSFET and in the end, we will look at some practical examples that show how this affects the MOSFET.

In one of our previous articles, we have discussed What is MOSFET: Its Construction, Types, and Working you can check that out if you want t to learn about the basics of a MOSFET.

Basic Properties of a MOSFET

Like Bipolar Junction Transistor or BJT, MOSFET is a three-terminal device, the three terminals being the GATE, the drain, and the SOURCE, with the gate controlling the conduction between the drain and source terminals. 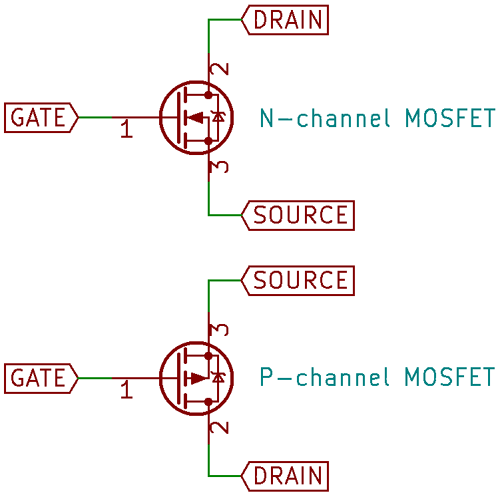 Technically speaking, a FET is inherently bidirectional, but the way power MOSFETs are constructed on the silicon-level adds a parasitic anti-parallel diode across the drain and source, which makes the MOSFET conduct when the voltage across it is reversed, which is something to keep in mind. Most power MOSFET schematic symbols are drawn showing the parasitic diode.[1]

The MOSFET can be thought of as a voltage-controlled variable resistor, just like the BJT transistor can be considered a current-controlled current source. However, like the BJT, this property is not linear, that is, the resistance does not decrease linearly with applied gate voltage, as shown in the below figure from the datasheet of the popular IRF3205, while we are talking about internal resistance heat plays a key role when it comes to internal resistance. 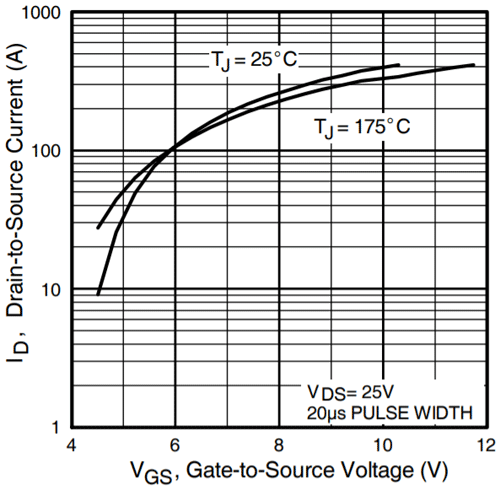 For the most part, this does not matter, since power MOSFETs are intended to be used for switching applications, though linear use is possible. There are a few important points considerations when using a MOSFET as a switch.

This depends on the application – power MOSFETs are available with breakdown ratings as low as 20V and as high as 1200V, and currents ranging from milliamps to kiloamps, a full six decades.

This is similar to the base-emitter voltage of a regular BJT, but with MOSFETs, this voltage is not as sharply defined. While a MOSFET might turn on at a relatively low voltage, it is only capable of carrying full current at a specified gate-source voltage. This is something to be careful about since most MOSFETs are specified at 10V­GS. Logic-level MOSFETs are available, which specify full current at 4.5V.

Since the gate is electrically isolated from the conductive path from the drain to the source, it forms a small capacitor that has to be charged and discharged every time the MOSFET switches on and off. For power MOSFETs, this capacitance can range from hundreds of picofarads to tens of nanofarads.

In the figure below, the simplest configuration for both the N and P-channel MOSFETs is shown. 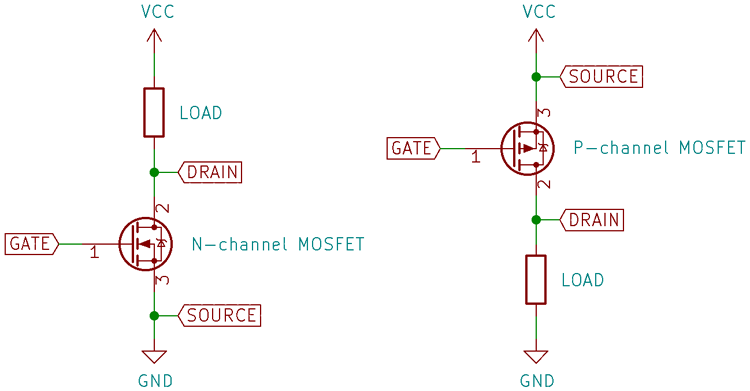 Just like a regular capacitor, the gate holds its charge till it’s removed or leaks away through the very small gate leakage current, to get rid of this charge, the gate must be discharged. This can be done by connecting the gate back to the source terminal. But what if the gate is left floating by the driving circuitry? If stray charges accumulate in the gate enough to push the gate voltage beyond the threshold, then the MOSFET turns on unintentionally, which could damage circuitry further downstream. For this reason, it’s common to see a pull-down/pull-up resistor between the gate and source, which removes the charge from the gate whenever the gate voltage is removed. It is good practice to include a pull-up/pull-down resistor between the gate of a MOSFET regardless of the kind of driver. 10K is a good value.

The gate of a MOSFET is very sensitive since the oxide layer insulating the gate from the channel is very thin. Most power MOSFETs have a rated gate-source voltage of only ±20V! For this reason, a Zener diode across the gate is a good precaution.

Since the gate capacitance combined with the inductance of the leads can result in ringing while switching, which is mitigated by adding a small resistor (around 10Ω) in series with the gate. The final MOSFET gate circuit looks like the below figure.

The gate of a MOSFET does not normally draw any current (apart from the small leakage current), but when used in switching applications where it should be turned on and off quickly, the gate capacitance has to be charged and discharged rapidly. This takes some current, and in these cases, a gate driver is needed, which can take the form of a discrete circuit, a gate-drive IC, or a gate drive transformer. 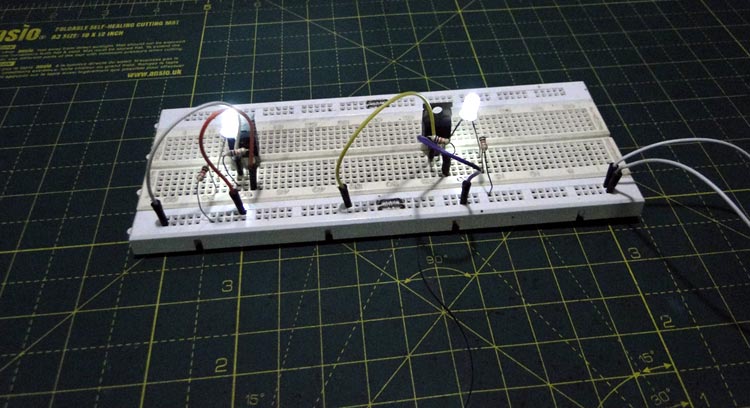 We have built a simple MOSFET as a switch circuit to show how N-channel MOSFET (left side) and P-channel MOSFET (right side) can be switched. You can also check out the video below that demonstrates how to turn on and turn off a MOSFET.

The MOSFET is a four-terminal device, with the fourth terminal being a substrate, which is the actual conductive silicon base the rest of the transistor is made on. This terminal is usually connected to the most negative rail in the circuit (for N-channel devices, that is, and vice versa for P-channel devices) so that it does not interfere with normal operation. For power MOSFETs, it is assumed that the source is the most negative terminal (since N-channel MOSFETs are mostly used low side, switching a load to the ground) so the substrate pin is connected to the source. This creates the mentioned parasitic diode. If the substrate pin were ‘broken out’, connecting it to the most negative rail would make sure the parasitic diode would never be forward-biased in normal operation.