As the reverse voltage applied to the Zener diode increases towards the specified Breakdown Voltage (Vz), a current starts flowing through the diode and this current is known as the Zener Current and this process is known as Avalanche Breakdown. The current increases to a maximum and get stabilized. This current remains constant over the wider range of applied voltage and allows the Zener diode to withstand with higher voltage without getting damaged. This current is determined by the series resistor.

Consider the Images below of a normal diode in action.

To show the operations of the zener diode, consider the two experiments (A and B) below. 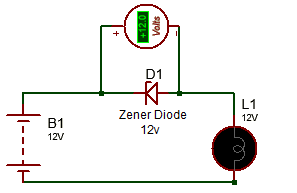 In Experiment A, a 12V zener diode is connected in reversed biased as shown in the image and it can be seen that the zener diode blocked the voltage effectively because it was less/equal to the breakdown voltage of the particular zener diode and the lamp thus stayed off.

In Experiment B, a 6v Zener Diode used is conducting (the bulb comes on) in reverse biased because the applied voltage is greater than its breakdown voltage and thus shows that the breakdown region is the region of operation of the zener diode.

The current-voltage characteristic curve of the Zener diode is shown below. 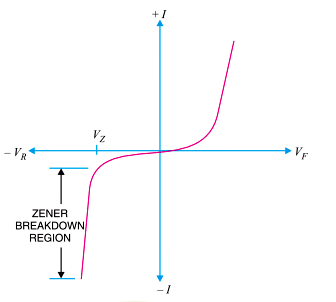 From the graph, it can be deduced that the zener diode operated in the reverse bias mode will have a fairly constant voltage irrespective of the amount of current supplied.

This is arguably the most common application of zener diodes.

This application of the zener diodes relies heavily on the ability of the zener diodes to maintain a constant voltage irrespective of variations in supply or load current. The general function of a voltage regulation device is to provide a constant output voltage to a load connected in parallel to it irrespective of variations in the energy drawn by the load (Load current) or variations and instability in the supply voltage.

The Zener diode will provide constant voltage provided current stays within the range of the maximum and minimum reverse current.

The circuit diagram showing the Zener diode being used as a Voltage regulator is shown below. 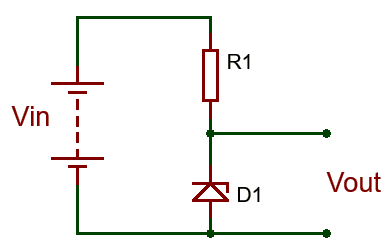 Care must be taken when selecting the value of resistor R1, as a small value resistor will result in a large diode current when the load is connected and this will increase the power dissipation requirement of the diode which could become higher than the maximum power rating of the zener and could damage it.

The value of resistor to be used can be determined using the formula below.

By using this formula it becomes easy to ensure that the value of the resistor selected doesn’t lead to the flow of current higher than what the zener can handle.

One little problem experienced with zener diode based regulator circuits is that the Zener sometimes generate electrical noise on the supply rail while making attempts to regulate the input voltage. While this may not be a problem for most applications, this problem may be solve by the addition of a large value decoupling capacitor across the diode. This helps stabilize the output of the zener. 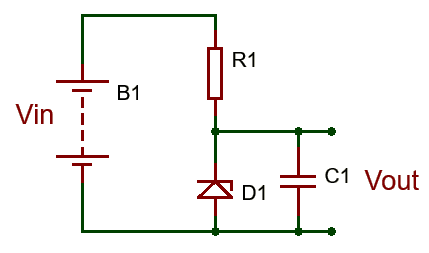 One of the uses of normal diodes is in the application of clipping and clamping circuits which are circuits that are used to shape or modify an input AC waveform or signal, producing a differently shaped output signal depending on the specifications of the clipper or clamper.

Clippers circuits generically are circuits that are used to prevent the output signal of a circuit from going beyond a predetermined voltage value without changing any other part of the input signal or waveform.

These circuits along with clampers are widely used in Analog television and FM radio transmitters for the removal of interference (clamping circuits) and limiting noise peaks by clipping of high peaks.

Since Zener diodes generically behave like normal diodes when the applied voltage is not equal to the breakdown voltage, they are also thus used in clipping circuits.

Clipping circuits could be designed to clip the signal either in the positive, negative or both regions. Although the diode will naturally clip off the other region at 0.7V irrespective of whether it was designed as a positive or negative clipper.

For example, consider the circuit below. 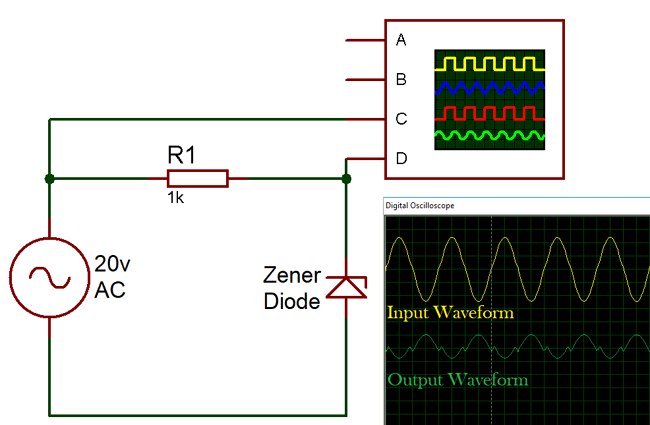 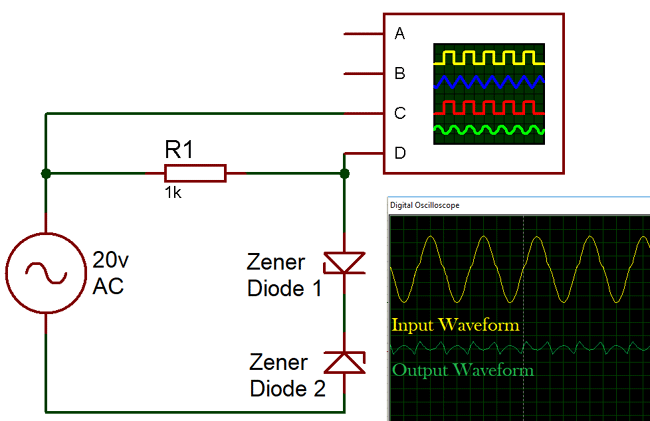 The voltage shifter is one of the simplest but interesting applications of the zener diode. If you have had experience especially with connecting a 3.3v sensor to a 5V MCU, and have seen first-hand the errors in readings, etc, that this can lead to them you will appreciate the importance of voltage shifters. Voltage shifters help convert signal from one voltage to another and with the ability of the zener diode to maintain steady output voltage in the breakdown region, it makes them Ideal component for the operation.

Consider the experiment below,

The voltage shifter as describe earlier on has several applications in modern day electronic circuits design as the design engineer may have to work with up to three different voltage level at times during design process.

Zener diodes are categorized into types based on several parameters which include;

The nominal Operation voltage of a zener diode is also known as the breakdown voltage of the zener diode, depending on the application for which the diode is to be used, this is often the most important criteria for Zener diode selection.

This represents the maximum amount of power the zener current can dissipate. Exceeding this power rating leads to excessive increase in the temperature of the zener diode which could damage it and lead to the failure of the things connected to it in a circuit.  Thus this factor should be considered when selecting the diode with the use in mind.

This is the maximum current that can be passed through the zener diode at the zener voltage without damaging the device.

This refers to the minimum current required for the zener diode to start operating in the breakdown region.

Other parameters that serve as the specification for the diode all need to be fully considered before a decision is made on the type on the kind of zener diode needed for that peculiar design.

Here are 5 points you should never forget about the zener diode.

I don't think I want to understand the article doe, but I gat brotherly love for the writter! Gbam!