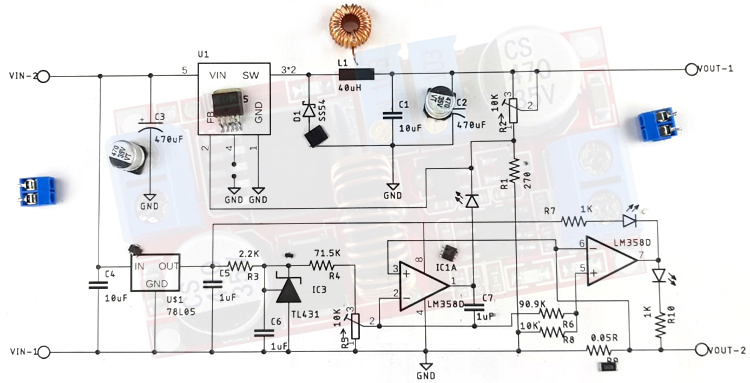 In this article we will be learning about the features and working of the XL4015 which is a 5A 180KHz 36V Buck DC to DC Converter. Here we will desolder all the components from the module, completely reverse engineer the schematic and make the PCB from it, so that we can order the components and make the PCB ourselves. In addition, we'll test the module and compare all the datasheet parameters to see if they hold true or not. So without further ado let's get right into it.

A Constant Current (CC), and Constant Voltage (CV) converter can come in very handy in various conditions, for example, if you want to charge a lithium battery with a constant current you can do that very easily with this module. Furthermore, if you are testing a circuit and powering it for the first time it's always recommended to use a constant current that will limit damage to your circuit if you made any mistakes in the build process. 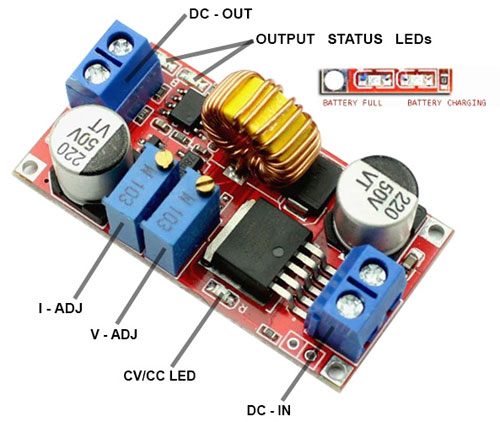 In the above image you can see first we have the DC input connector, which is to connect to an unregulated power source. Next, we have two 10K potentiometers that are used to set the constant current and voltage level. Furthermore, there are three LED indicators on the board; the first one near the input connector shows when the module is in constant current mode, while the other two near the output are mainly for battery charging applications (battery charging and battery full indicators). Other than that, this IC has an input voltage range of 8V to 36V, and the output voltage of the device is 1.25V to 32V. With max load, the PWM of the device can reach 100% duty cycle and it can operate on a 180 kHz operating frequency. The constant output current of the module is 5A and it can reach up to 96% efficiency while working. If we are talking about protection features it has thermal shutdown, short circuit protection, and current limit functionality.

Before we look at the schematic, here is a list of components that are required to build the XL4015 Buck Converter Circuit. The main component in this board is the XL4015 buck converter IC, that is a 5pin IC designed and developed by XLSEMI which is a well-known manufacturer in china and very famous for producing compact buck and boost converter ICs. The list of components required to build the 5A Buck Converter Circuit is shown below- 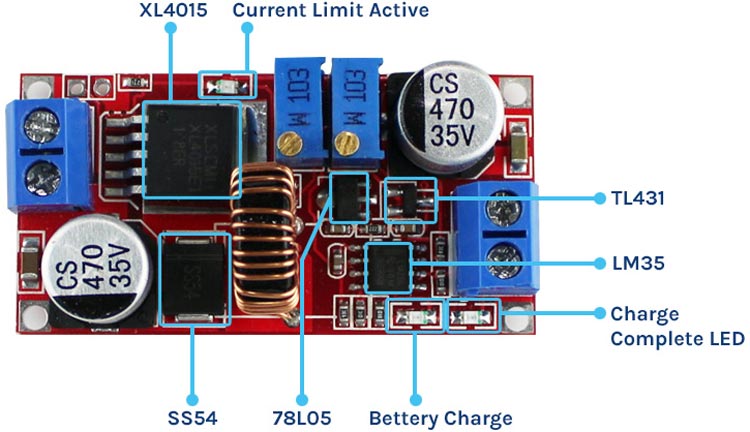 Circuit Diagram of the XL4015 5A Buck Converter

The working of the circuit is simple and difficult at the same time. If we check the datasheet of the XL4015 5A buck converter Module, we can see the typical application schematic that is given below.

Now compare the above schematic to our schematic, you can see that it's very similar because the schematic for the buck regulator portion stays the same the only additional difference is that it has additional current limiting functionality.

Now let's understand how the current limiting functionality works. In the schematic, you can see we have a 78L05 Voltage Regulator which is an ultra-low-power regulator that is used to convert the input voltage to a constant 5V for the TL431 IC. The TL431 is a reference that is set to a constant current regulator mode with the help of a 71.5K resistor and a potentiometer. This reference is compared to the sense voltage from the output side of the resistor to limit the current. The circuit shown below is the TL431 circuit that is providing a constant current source to the op-amps. 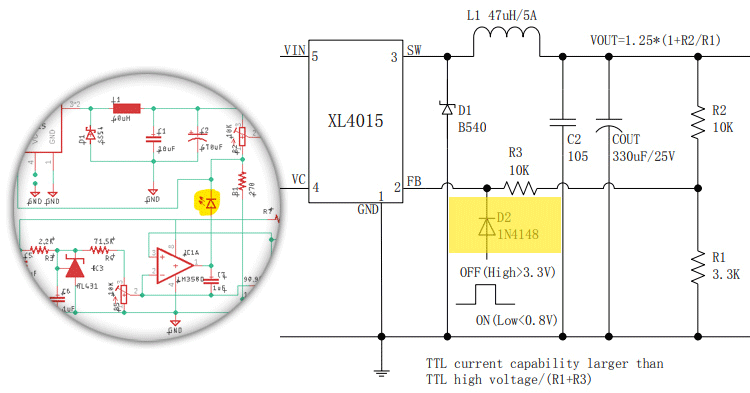 In the above image, I have shown you an application circuit from the datasheet with a practical circuit side by side. So in the practical circuit, the manufacturer uses an LED instead of a diode, this LED not only acts as a reverse current blocking but also lights up when the current limit function is active. 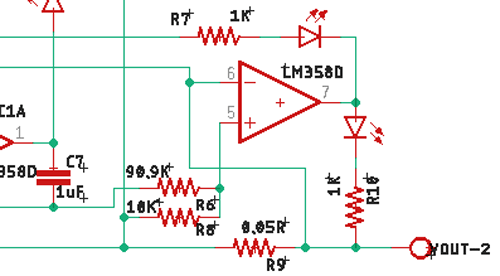 As we have already made the schematic we thought to recreate the PCB for the buck converter modules and we did just that. The dimension of the PCB is 25mm / 50mm. You can see that from the image below. 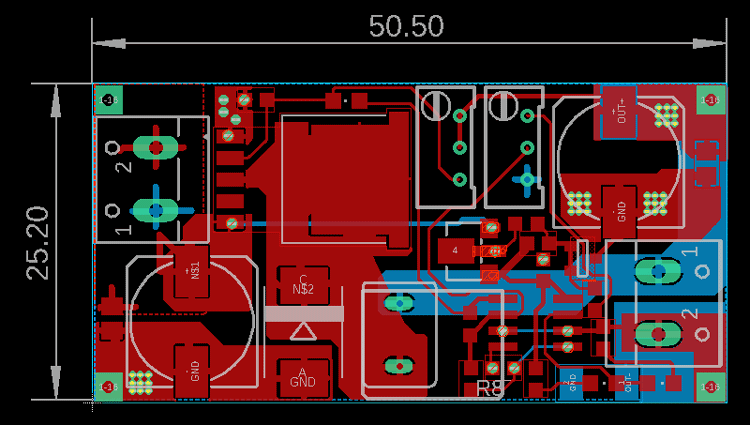 Next, we have used the Manufacturing functionality of eagle to determine the top and bottom portion of the PCB and it looks like something that is shown below. 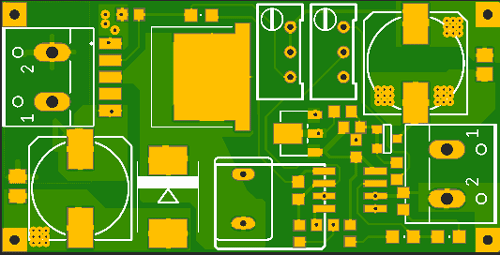 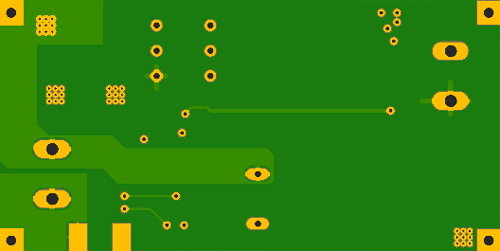 That's all for the PCB part and you can download the Gerber file for the project by clicking the given download link.

To start the test, we first connect the buck converter module to the power supply and connect the output to the DC load, and we have set a constant load of 1A to test the circuit. 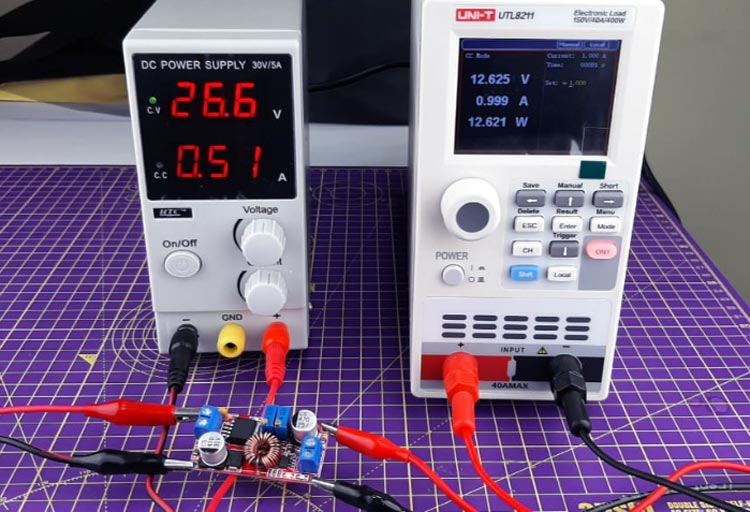 Now as that was working, we set the constant current to 5A as it was advertised in the datasheet. 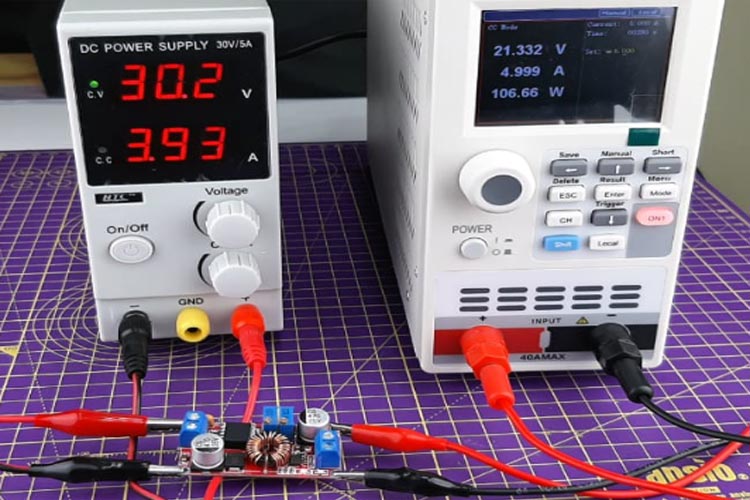 If you consider the size of the module I was very impressed to see that it was able to deliver, a constant current of 5A. I tested this circuit for 5 minutes and it was working absolutely fine. 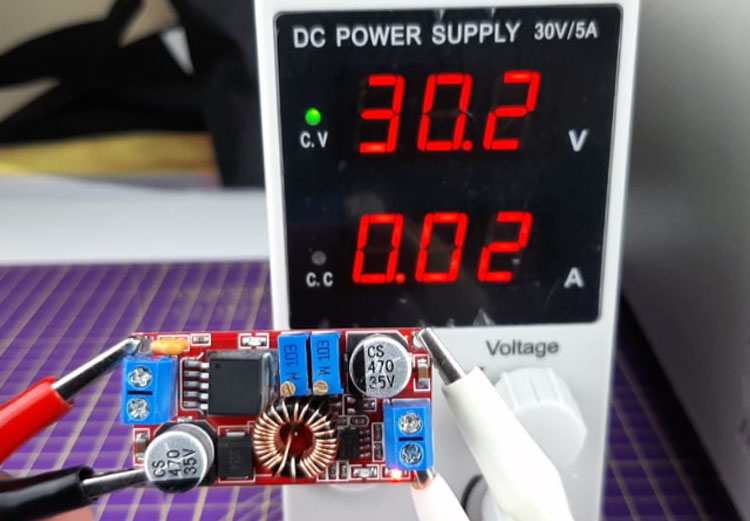 Next, we tested this circuit for short circuit conditions. As advertised on the datasheet it has built-in short circuit protection, so we also tested that. And it worked absolutely fine. 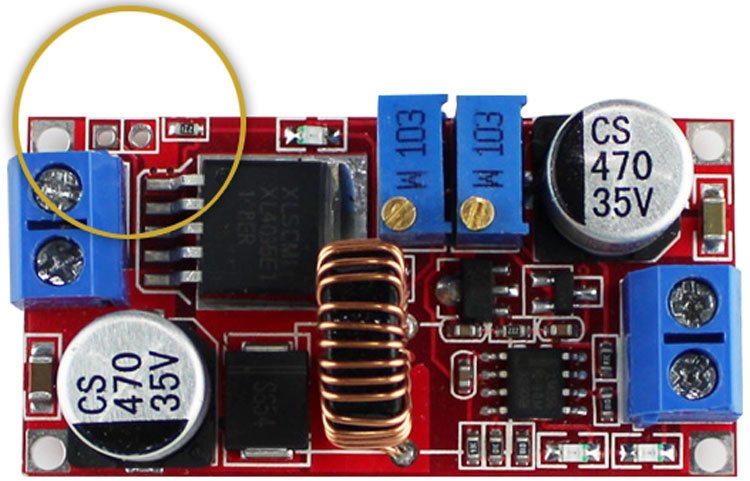 But the solution to this problem was very simple: we connected a 1uF capacitor to the PCB and the module worked absolutely well without any issues. Other than that we did not find any problems with the module board.

I tested the module under various input/output voltages and load conditions and evaluated its efficiency, and all the tests went smoothly without any issues. So we can say that the XL4051 is a very cost-efficient and highly effective module for demo projects and battery charging.