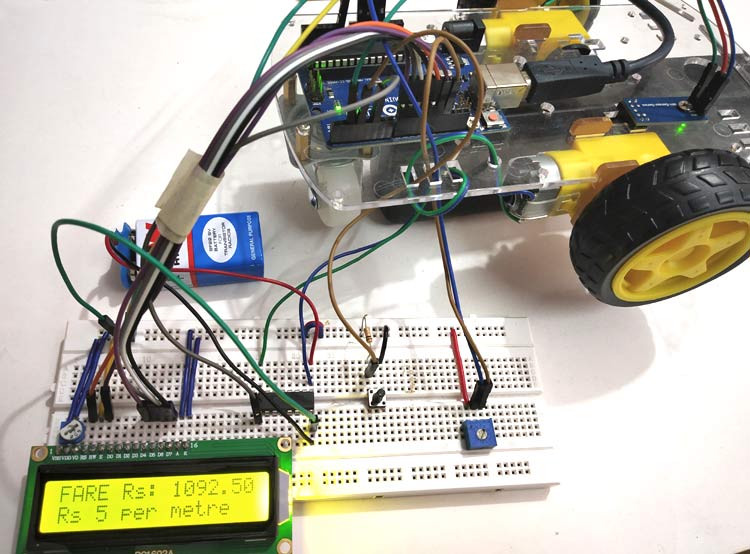 Today digital meters are replacing analog meters in every sector whether its electricity meter or taxi fare meter. The main reason for that is analog meters have mechanical parts that tend to wear when used for long time and they are not as accurate as digital Meters.

A good example for this is analog speedometer and odometer that is used in old motor bikes for measuring speed and distance travelled. They have a special parts called pinion and rack arrangement in which a cable is used to rotate speedometer’s pin when wheel is rotated. This will wear out when using for long period and also needs replacement and maintenance.

In digital meter, instead of using mechanical parts, some sensors like optical interrupter or hall sensor is used to calculate the speed and distance. This is more accurate than the analog meters and doesn’t require any maintenance for long period of time. We previously built many digital speedometer projects using different sensors:

Today, in this tutorial we will make a prototype of a Digital Taxi Fare Meter using Arduino. This project calculates speed and distance travelled by the taxi’s wheel and continuously displays it on 16x2 LCD display. And based on distance travelled it generates fare amount when we press push button. 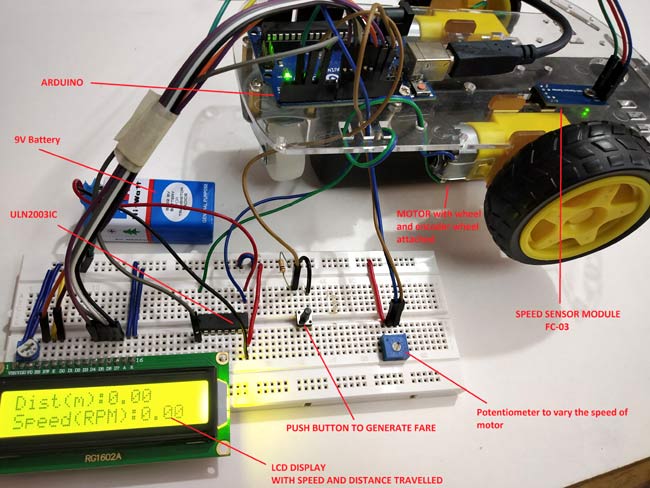 This prototype has a RC car chassis with a Speed sensor module and an encoder wheel attached to motor. Once speed is measured, we can measure the distance travelled and find the fare amount value by pressing push button. We can set the speed of the wheel using potentiometer. To learn more about using LM-393 Speed Sensor module with Arduino, follow the link. Let’s see a short introduction of Speed sensor module. 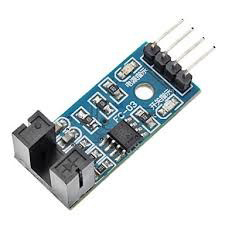 This is a slot type module that can be used for measuring speed of rotation of encoder wheels. This Speed sensor module works based on slot type optical interrupter also known as optical source sensor. This module requires a voltage of 3.3V to 5V and produces digital output. So it can be interfaced with any microcontroller. 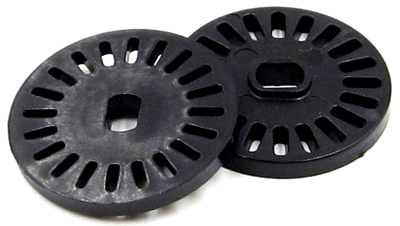 Thus with this sensor a slotted disc (Encoder Wheel) is used that can be attached to a motor and when the wheel rotates with motor it interrupts the light beam between IR LED and phototransistor that makes output On and Off (Creating Pulses).

This module comes with LM393 Comparator IC which is used to produce accurate HIGH and LOW signals at the OUTPUT. Thus this module is sometimes called as LM393 Speed sensor.

To measure the speed of rotation we need to know the number of slots present in encoder wheel. I have an encoder wheel with 20 slots in it. When they rotate one complete rotation we have 20 pulses at the output. So to calculate speed we need number of pulses produced per second.

If there are 40 pulses in one second, then

For calculating speed in RPM (Revolutions per Minute) multiply with 60.

Measuring distance travelled by the wheel is so simple. Before calculating distance, the circumference of the wheel should be known.

Where d is the diameter of the wheel.

So to calculate the distance travelled, just multiply the no of pulses detected with the circumference.

So when a wheel of Circumference 20.7cm takes 20 pulses that is one rotation of encoder wheel then the distance travelled by wheel is calculated by

Note: This is a small RC car wheel, in real time cars have bigger wheels than this. So I’m assuming that circumference of the wheel to be 230cm in this tutorial.

Calculating the Fare Based on Distance Travelled

To get the total fare amount, multiply the distance travelled with the fare rate (amount/meter).

Note: In this tutorial I’m assuming that Rs 5 is charged per meter.

So now let’s get the components and build the circuit.

Circuit diagram for Digital Taxi Fare Meter Project using Arduino is given below: 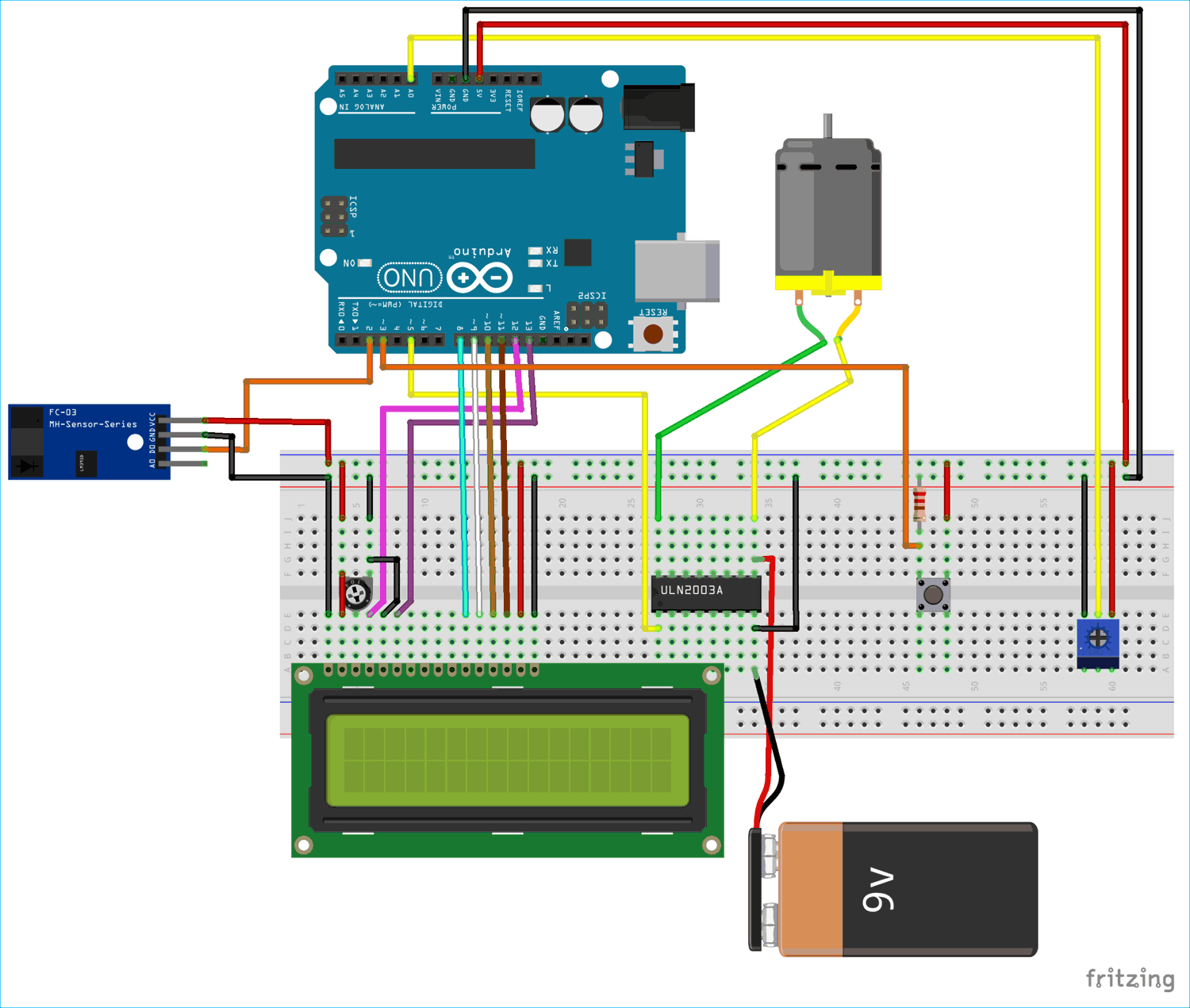 Speed sensor is mounted with the encoder wheel present in between the gap of sensor. In my chassis I have a special hole for placing the sensor. See the image below 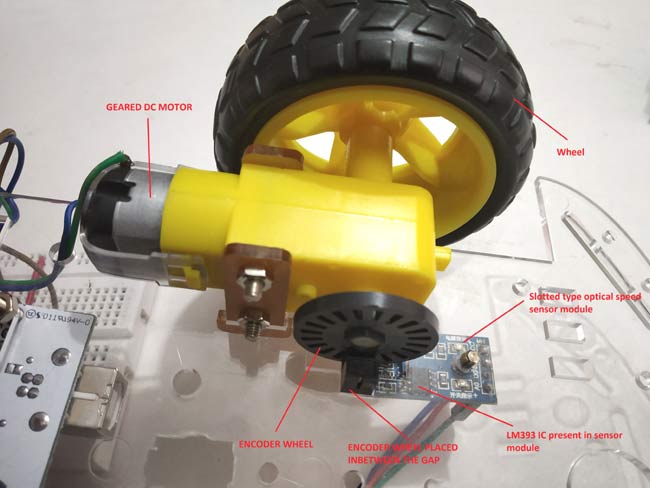 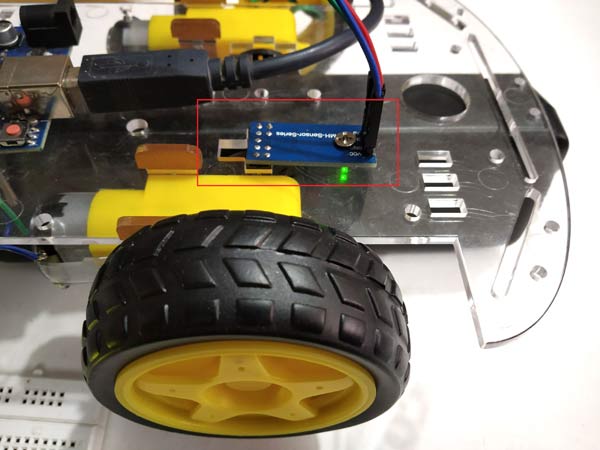 I have used a 9V battery and ULN2003 IC to externally power the motor.

A push button with pull down resistor is connected to the pin 3 of Arduino for generating fare amount when pressed.

A potentiometer is used to give analog input voltage to the pin A0 of the Arduino for varying speed of the motor wheel. 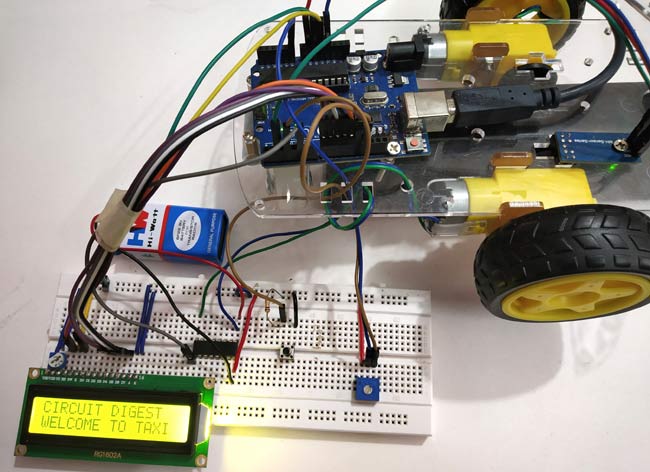 Complete code with a demonstration Video is given at the end of this tutorial. Here we understand few important parts of the code.

Before getting into the code we need to know about interrupts and timer One library as they are used in the code.

Interrupts is used here because we need to constantly check the output detected at the speed sensor module as the high priority. So ISR is used in the code. ISR is interrupt service routine that is called when an interrupt is occurred at the interrupt pins 2 & 3.

At pin 2, output from D0 of speed sensor is connected.

At pin 3, a push button with pulldown resistor is connected.

TimerOne library is used in this code to check how many rotations (how many pulses) are detected for one second and from that we can calculate the speed per second and display them at the output. This ISR function executes for every second

So let’s see our code in detail:

1. First of all, include libraries for the functions are going to be used in programme.

2. Next declare the global variables as they will be used throughout the program.

3. Next define and initialize the LCD pins that are connected to Arduino.

Define the pin mode, here PIN A0 is used for taking Analog input from potentiometer and pin 5 to write analog output which is connected to IN1 pin of ULN2003 IC.

Next display some welcome message and clear them.

First we need to set timer1 for 1 second and next attach an ISR for timer1 so that this ISR is called every second. The ISR name is timerIsr

Next attach two external interrupts. First interrupt makes the Arduino pin 2 as interrupt pin and calls ISR (count) when there is RISING (LOW TO HIGH) detected at the pin 2. This pin 2 is connected to the D0 output of the speed sensor module.

And second one makes the Arduino pin 3 as interrupt pin and calls ISR (generatefare) when HIGH is detected at the pin3. This pin is connected to the push button with a pull down resistor.

5. Next let’s see about the ISR we used here:

ISR1- count() ISR is called when an RISING (LOW TO HIGH) is happened at the pin 2 (connected to speed sensor).

ISR2- timerIsr() ISR is called every one second and execute those lines present inside the ISR.

This function contains the lines that actually first detach the Timer1 and Interrupt pin2 first because we have LCD print statements inside the ISR.

For calculating SPEED in RPM we use below code where 20.0 is the no of slots preset in the encoder wheel.

And for calculating distance below code is used:

After that we display the SPEED and DISTANCE on LCD display

IMPORTANT: We have to reset the counter to 0 because we need to get number of pluses detected for per second so we use this line

Next read the analog pin A0 and convert it into digital value (0 to 1023) and further map those values to 0-255 for PWM output (Setting speed of motor) and finally write those PWM values using analogWrite function that is connected to the ULN2003 Motor IC.

ISR3: generatefare() ISR is used to generate the fare amount based on the distance travelled. This ISR is called when interrupt pin 3 is detected HIGH (When push button pressed). This function detaches the interrupt at pin 2 and the timer interrupt and then clears the LCD.

After that distance travelled is multiplied with 5 (I have used 5 for the rate INR 5/meter). You can change according to your wish.

After calculating the amount value display it on the LCD display connected to Arduino.

You can further improve this prototype by increasing accuracy, robustness and adding more features like android app, digital payment etc and develop it as a product.

I have a LCD that uses a I2C connection (four pins, (GND, VCC, SDA, SCL).  Is there any way to complete this project using these four pins and connections?  If so would love code and if this is possible.  Thank you

what is the circular thing

what is the circular thing near the lcd? (upper left)

It's a potentiometer, for

It's a potentiometer, for varying the contrast of the LCD display

I built it but its not

I built it but its not working

i connect this project but

Hello, Sir, I tried to

Hello, Sir, I tried to connect but it is not working according to the speed sensor.can you help me