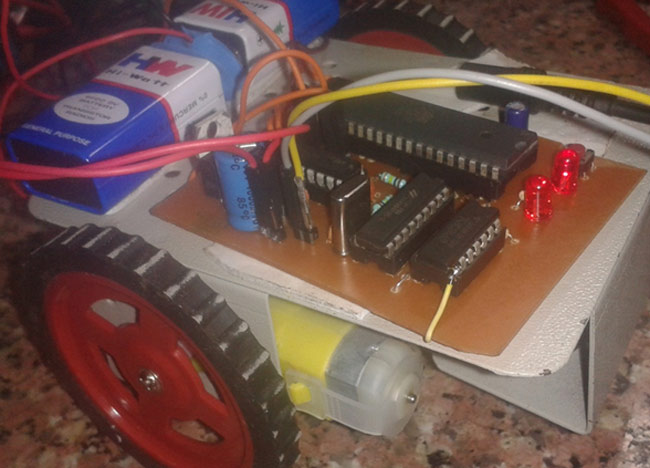 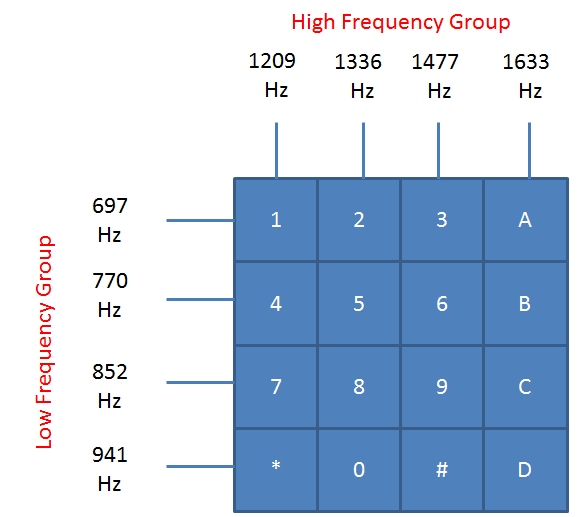 In given figure we can see two groups of different frequencies. When one upper and one lower frequencies mix together then a tone is created which is called Dual Tone Multiple Frequency.

We can divide the complete cell phone controlled robot into different sections, which are shown in the below figure. 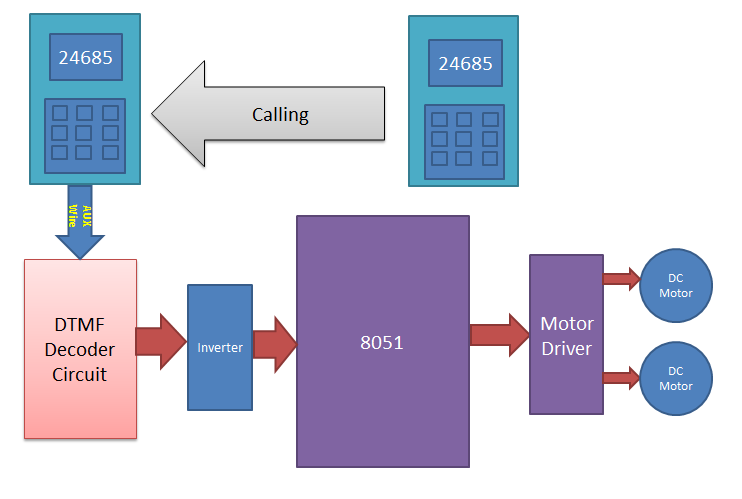 Remote Section: This section’s main component is DTMF. Here we get a tone from the cellphone by using aux wire to DTMF Decoder IC namely HT8870 which decodes the tone into digital signal of 4bit.

Control Section: 8051 is used for controlling the complete process of this mobile phone controlled robot. 8051 reads commands sent by DTMF Decoder and compare with defined code or pattern. If commands match, the microcontroller sends respective command to driver section. 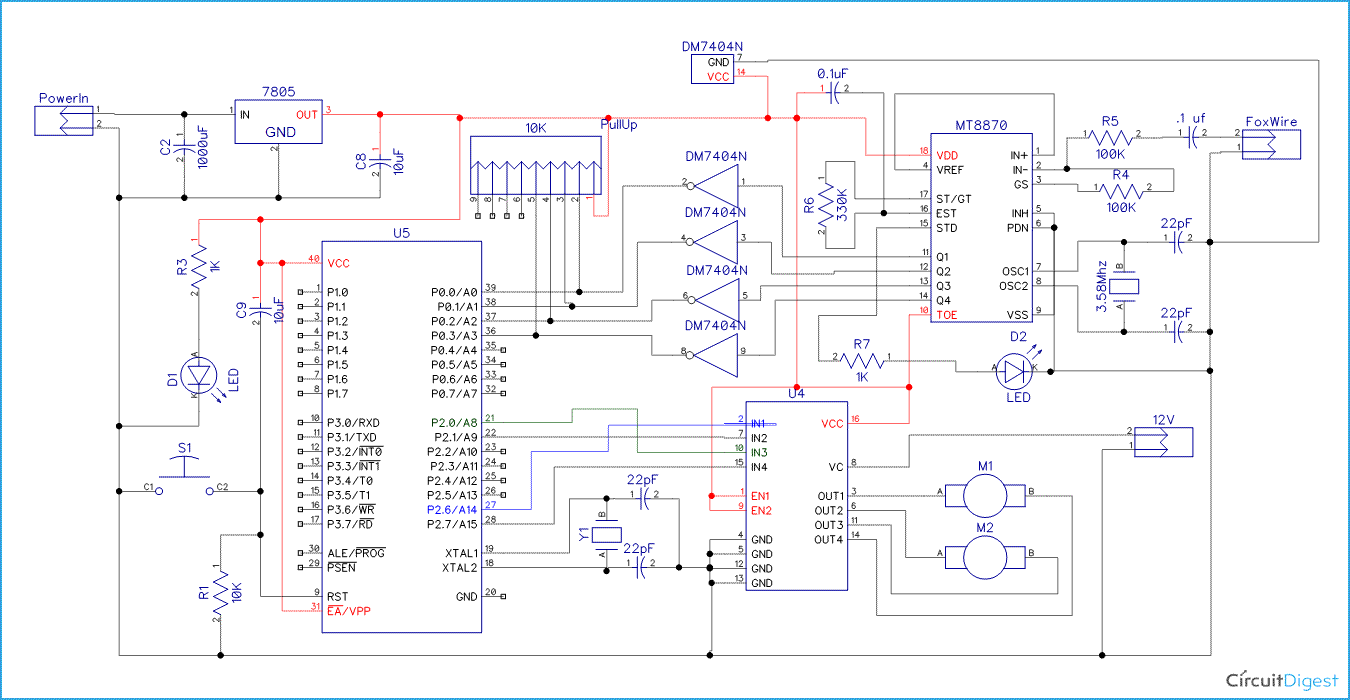 Circuit Diagram of Cell Phone Controlled Robot is very similar with our other robotics projects like PC Controlled Robot, Line Follower, Gesture Controlled Robot, etc. Here one motor driver is connected to 8051 microcontroller for driving robot. Motor driver’s input pin 2, 7, 10 and 15 are connected at 8051’s pin number P2.6, P2.3, P2.0 and P2.7 respectively. Here we have used two DC motors to drive robot in which one motor is connected at output pin of motor driver 3 and 6 and another motor is connected at 11 and 14. A 9 volt Battery is also used to power the motor driver for driving motors. A DTMF decoder is added with this circuit to fulfil our aim to control the robot with cell phone, and this decoder is plugged into a mobile phone using an aux wire for receiving command or DTMF Tone. DTMF decoder pins D0-D3 are connected with 8051’s pin number P0.0, P0.1, P0.2, P0.3 through NOT gate IC namely 7404. So 8051 will get inverted input from DTMF decoder like if we will press button ‘5’ from mobile keypad the output of DTMF decoder will be 0010 but 8051 will get 1101. Two 9 Volt batteries are used to power the circuit in which one is used for power the motors, connected at motor driver IC pin number 8, and other battery is connected to power the remaining circuit.

First we make a call by using remote phone to receiver phone and then attend the call by manually or automatic answer mode. Now here is how this robot is controlled by cell phone:

When we presses ‘2’ by remote phone, robot start to moving forward and moving continues forward until next command comes. 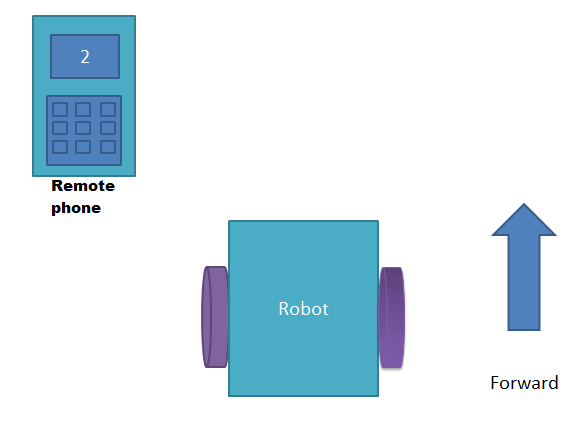 When we presses ‘8’ by remote phone, robot change his state and start moving in backward direction until other command comes. 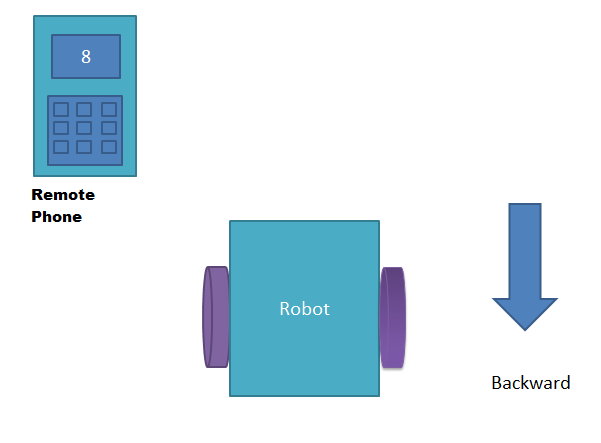 When we press ‘4’, Robot get turn left till next command exicuted. 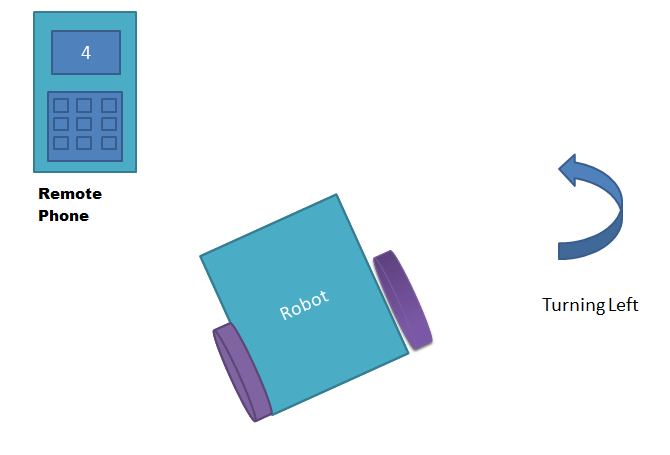 When we press ‘6’, robot turned to right. 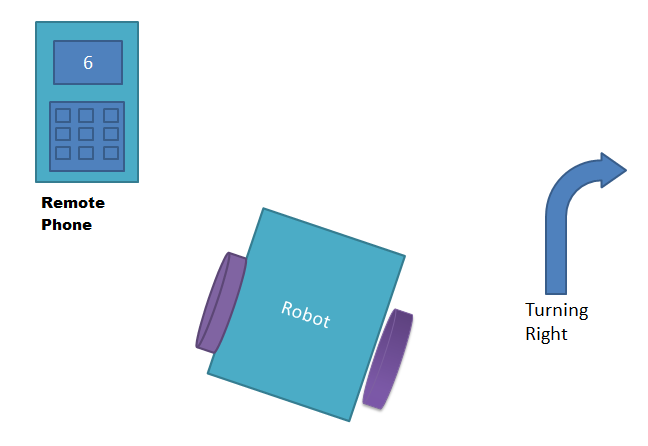 And for stopping robot we pass‘5’. 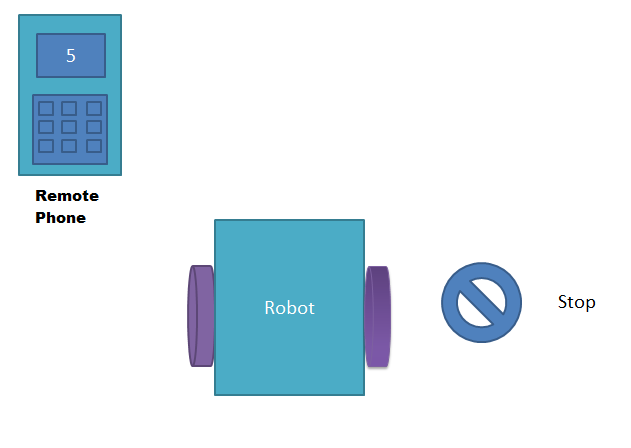 Here is the PCB layout for cell phone controlled robot using 8051 microcontroller. Here you can find a tutorial to design a PCB at home with easy steps: How to make a PCB at home 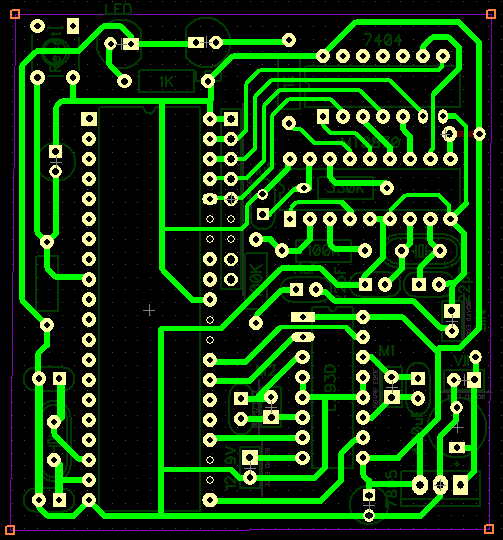 plz.. can you send me this code in assembly language on my email id

Please send me this code in assembly language on my email.
Thanks

i wanted to know if the code is right or not. It is not working. Can you help, we have to submit it tomorrow.

Is that assembly language

Is that assembly language code or c language.??

This code is written in c language,

can u also send the coding to

can u also send the coding to me and every step to do it please..im lacking of ways to do my semestral project..tskk

what will be the maxim range of Bluetooth device?

How did you execute hex file

How did you execute hex file into this controller..?? I cant see any port to connect to computer as there is in dev board.

i want how to connect from Beginning to end with connection

Did u complete ur project ..

Did u complete ur project ...please help us if u have done it....we should submit it after 2 days...plz

can you send me .brd file or .sch file plzzzzzzzzzz

I want to know how to connect