Optocoupler: Its Types and Various Application in DC/AC Circuits 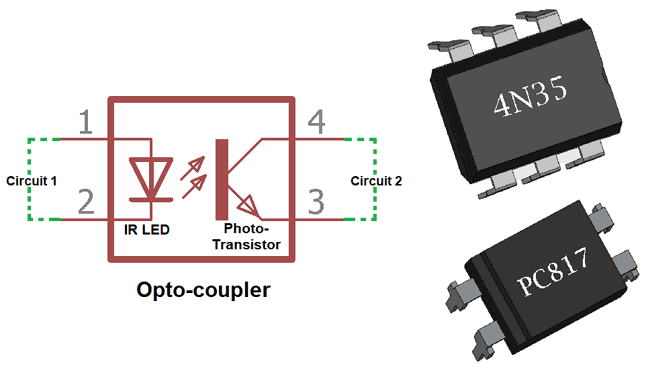 Often in circuits, especially low voltage or highly noise sensitive circuits, Optocoupler is used to isolate circuitry to prevent electrical collision chances or to exclude unwanted noises. In present commercial market, we can buy Opto-coupler with 10 kV to 20 kV input to output withstand voltage capacity, with a specification of 25 kV / uS voltage transients. 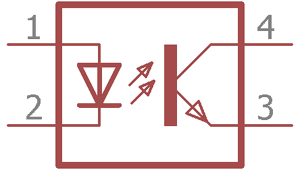 In the upper image the internal construction is shown inside a Photo-transistor Optocoupler. The Transistor type can be anything whether PNP or NPN.

Photo-Transistor can be further of two types depending on the output pin availability. On the second image on the left, there is additional pin out which is internally connected with transistor’s base. This pin 6 is used to control the sensitivity of the photo-transistor. Often the pin is used to connect with ground or negative using a high value resistor. In this configuration, false triggering due to noise or electrical transients can be controlled effectively. 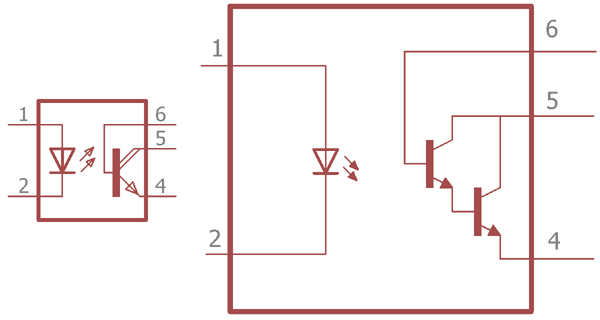 In the upper image there are two types of symbol, internal construction of Photo-Darlington based opto-coupler is shown.

This type of opto-coupler also used in DC circuit related area for the isolation. The 6th pin which is internally connected to the base of the transistor, used to control the sensitivity of the transistor as discussed previously in photo-transistor description. 4N32, 4N33, H21B1, H21B2, H21B3 are few photo-Darlington based opto-coupler example. 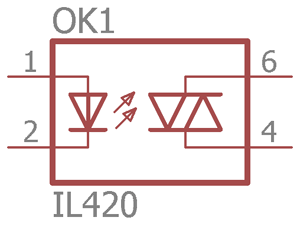 In the upper image the internal construction or the TRIAC based opto-coupler is shown. 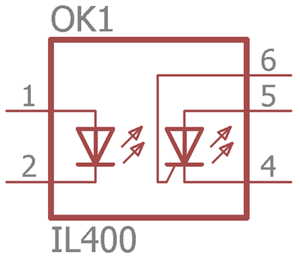 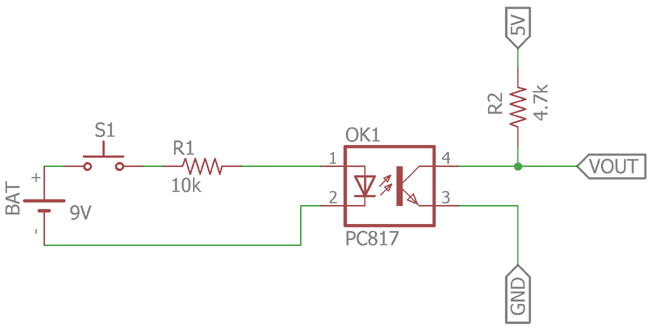 In the upper circuit a Photo-Transistor based optocoupler circuit is used. It will act like a typical Transistor switch. In the schematic a low cost photo-transistor based opto-coupler PC817 is used. The infra-red led will be controlled by the S1 switch. When the switch will be on, the 9V battery source will provide current to the LED via the current limiting resistor 10k.The intensity is controlled by the R1 resistor. If we change the value and make the resistance lower, the intensity of the led will be high making the transistor gain high.

On the other side the transistor is a photo-transistor controlled by the internal infra-red led, when the led emit infra-red light the photo transistor will contact and the VOUT will be 0 turning off the load connected across it. It is needed to remember that as per the datasheet the collector current of the transistor is 50mA. The R2 provide the VOUT 5v. The R2 is a pull-up resistor.

In this configuration the photo-transistor based opto-coupler can be used with the microcontroller for detecting pulses or interrupt.

Here another circuit is shown to detect the AC voltage. The infra-red led is controlled using two 100k resistor. The two 100k resistor used instead of one 200k resistor is for extra safety for short-circuit related condition. The LED is connected across wall outlet Line (L) & Neutral line (N). When the S1 is pressed the led start to emit infra-red light. The photo transistor makes a response and converts the VOUT from 5V to 0V.

In this configuration the opto-coupler can be connected across low voltage circuit such as microcontroller unit where the AC voltage detection is required. The output will produce square High to Low pulse.

This type of configuration is used to control electrical appliances using low voltage circuitry. The IL420 is used in the upper schematic which is a photo-TRIAC based Opto-coupler.

Other than this type of circuitry an opto-coupler can be used in SMPS to sending secondary side short-circuit or over current condition information to the primary side.

If you want to see Optocoupler IC in real action, check below circuits:

Satisfy of understanding how Optocoupler works.