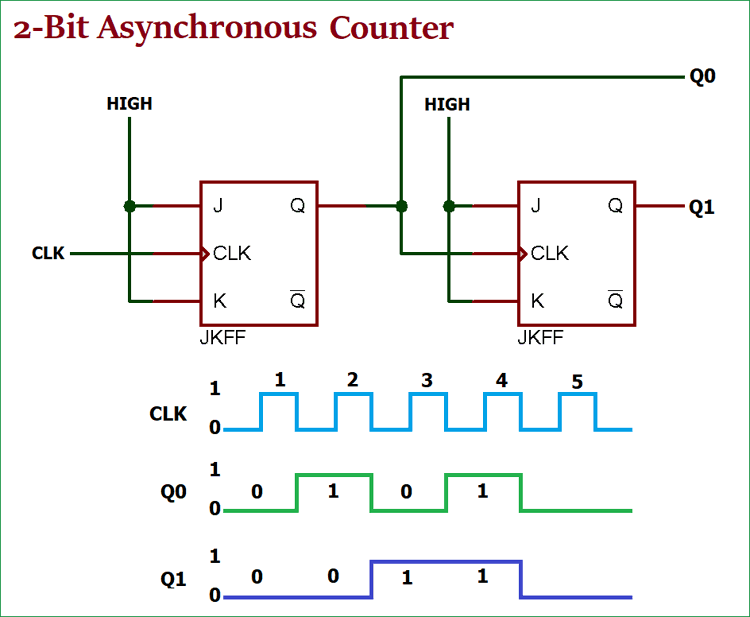 What is a Counter?

As there is a maximum output number for Asynchronous counters like MOD-16 with a resolution of 4-bit, there are also possibilities to use a basic Asynchronous counter in a configuration that the counting state will be less than their maximum output number. Modulo or MOD counters are one of those types of counters. The configuration made in such a way that the counter will reset itself to zero at a pre-configured value and has truncated sequences.

So, if a counter with the specific number of resolutions (n-bit Resolution) count up to  is called as full sequence counter and on the other hand, if it is count less than the maximum number, is called as a truncated counter.

To get the advantage of the asynchronous inputs in the flipflop, Asynchronous Truncated counter can be used with combinational logic.

Modulo 16 asynchronous counter can be modified using additional logic gates and can be used in a way that the output will give a decade (divided by 10) counter output, which is useful in counting standard decimal numbers or in arithmetic circuits. This type of counters called as Decade Counters.

Decade Counters requires resetting to zero when the output reaches a decimal value of 10.

Timing Diagram of Asynchronous Decade Counter and its Truth Table 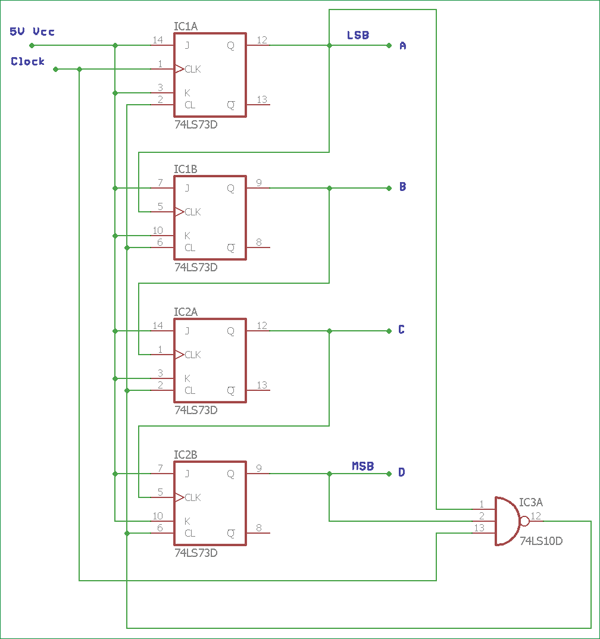 In the above image, a basic Asynchronous counter used as decade counter configuration using 4 JK Flip-Flops and one NAND gate 74LS10D. The Asynchronous counter count upwards on each clock pulse starting from 0000 (BCD = 0) to 1001 (BCD = 9). Each JK flip-flop output provides binary digit, and the binary out is fed into the next subsequent flip-flop as a clock input. In the final output 1001, which is 9 in decimal, the output D which is Most Significant bit and the Output A which is a Least Significant bit, both are in Logic 1. These two outputs are connected across 74LS10D’s input. When the next clock pulse is received, the output of 74LS10D reverts the state from Logic High or 1 to Logic Low or 0.

In such a situation when the 74LS10D change the output, the 74LS73 J-K Flip-flops will get reset as the output of the NAND gate is connected across 74LS73 CLEAR input. When the flip-flops reset, the output from D to A all became 0000 and the output of NAND gate reset back to Logic 1. With such configuration, the upper circuit shown in the image became Modulo-10 or a decade counter.

The below image is showing the timing diagram and the 4 outputs status on the clock signal. The reset pulse is also shown in the diagram. 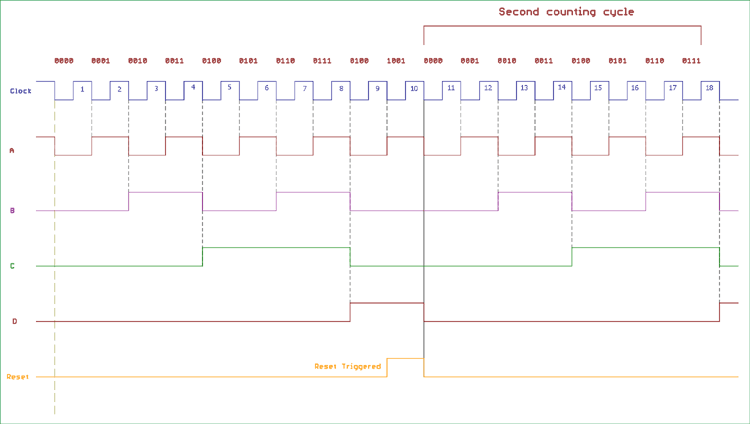 We can modify the counting cycle for the Asynchronous counter using the method which is used in truncating counter output. For other counting cycles, we can change the input connection across NAND gate or add other logic gates configuration.

As we discussed before, that the maximum modulus can be implemented with n numbers of flip-flops is 2n . For this, if we want to design a truncated asynchronous counter, we should find out the lowest power of two, which is either greater or equal to our desired modulus.

We can cascade two or more 4-bit ripple counter and configure each individual as “divided by 16” or “divided by 8” formations to get MOD-128 or more specified counter.

Other ICs like 74LS90 offer programmable ripple counter or divider that can be configured as a divide by 2, divide by 3 or divide by 5 or other combinations as well.

On the other hand, 74LS390 is another flexible choice which can be used for large divide by a number from 2 to 50,100 and other combinations as well.

One of the best uses of the asynchronous counter is to use it as a frequency divider. We can reduce high clock frequency down to a usable, stable value much lower than the actual high-frequency clock. This is very useful in case of digital electronics, timing related applications, digital clocks, interrupt source generators.

Suppose we are using classic NE555 timer IC which is a Monostable/Astable Multivibrator, running at 260 kilohertz and the stability is +/- 2 %. We can easily add a “Divided by 2” 18-bit ripple counter and get 1 Hz stable output which can be used for generating 1-second of delay or 1-second of the pulse which is useful for digital clocks.

This is a simple circuit to produce stable frequency or timing from an unstable source by dividing the frequency using ripple counter. More precise crystal oscillators can produce precise high frequency other than the signal generators.

Advantages and Disadvantages of Asynchronous Counter

Asynchronous counters can be easily built using Type D flip-flops. They can be implemented using “divide by n” counter circuit, which offers much more flexibility on larger counting range related applications, and the truncated counter can produce any modulus number count.

But, despite those features, Asynchronous counter offer some limitations and disadvantages.

While using the Asynchronous counter, an additional re-synchronizing output flip-flops required for resynchronizing the flipflops. Also, For the truncated sequence count, when it is not equal to , extra feedback logic is needed.

When counting a large number of bit, due to the chain system, propagation delay by successive stages became too large which is very difficult to get rid off. In such a situation, Synchronous counters are faster and reliable. There are also counting errors in Asynchronous Counter when high clock frequencies are applied across it.