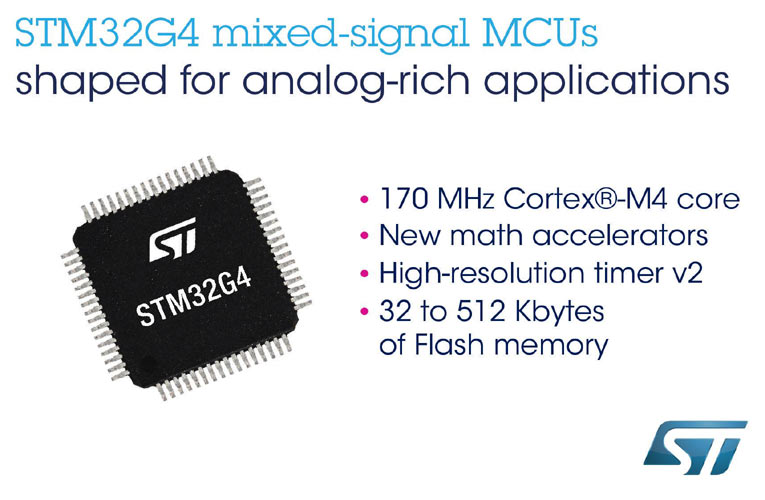 ​As the latest smart electronic products add extra sensor-driven features and adopt higher-efficiency power technologies such as silicon carbide or gallium nitride to save energy, STMicroelectronics has unleashed its next generation of microcontrollers with the performance to manage them.

Further new features include higher-resolution power conversion timers with various built-in functions that offload the CPU and ease developers’ lives. There are also higher-performing analog peripherals and converters, ultra-speed connections for lightning-fast response to external events, and support for the latest USB-C interface with Power Delivery that allows fast charging or conveniently powering devices up to 100W.

“Cutting-edge consumer and industrial products can now deliver more for less, leveraging the innovations we have engineered into the STM32G4 series,” said Ricardo De Sa Earp, General Manager of STMicroelectronics’ Microcontroller Division. “Building on the unprecedented concept of the STM32F3 series, which integrates rich, enhanced peripherals and interfaces with the industry-standard Arm® core, our latest microcontrollers now extend the application reach and help simplify design at the same time as reducing power consumption and boosting performance.”

MCU Architecture
The STM32G4 series builds on existing innovations created by ST to boost performance and efficiency, such as the ART Accelerator™ and CCM-SRAM Routine Booster. These, respectively, enhance dynamic and static memory-cache performance for superior whole-application and real-time performance on an efficient power budget.

ST’s new hardware mathematical accelerators up the ante once again, introducing a Filter-Math Accelerator (FMAC) and dedicated CORDIC engine. These new peripherals deliver faster results for rotational and vector trigonometry used in motor control, as well as general logarithmic, hyperbolic, and exponential functions, IIR/FIR filtering for signal conditioning or the 3p/3z controller in digital power supplies, and vector functions such as convolution and correlation. The STM32G4 series is built on a high-speed 170MHz implementation of the Arm Cortex®-M4 core, with floating-point unit and DSP extensions, benchmarked at 213DMIPS and 550 CoreMark.

There are also power-saving innovations throughout, from the advanced process technology and architectural features to advanced peripheral sleep/wakeup management. Further important new features include:

More than 100 of the 152 devices ST has planned for this series are already available, from Access Line devices in 32-pin packages to Performance Line and High-Resolution Line MCUs with up to 107 fast input/output pins. Prices start from $1.68 (10,000-unit price) for the STM32G431K6U6 with 32Kbyte Flash memory in the 32-pin QFN32 package.