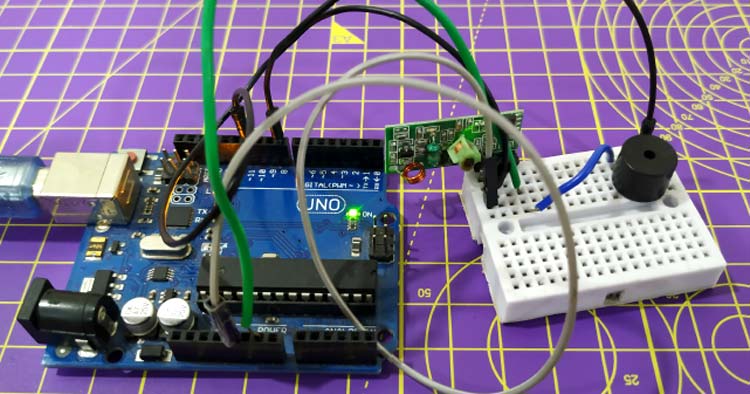 In this project, we are going to build a Wireless Doorbell using Arduino. We will have a button which when pressed will wirelessly play a melody of our choice to indicate someone is at the door. For wireless connectivity, we will use the 433 MHz RF module.  In general, the RF module must always be accompanied by a decoder and encoder module, but in place of the decoder and encoder module, we can also use a microcontroller such as Arduino which we are using in this tutorial. If you want to build a simple wired Doorbell you can check this Doorbell using 555 IC tutorials to build one.

Learn more about the RF transmitter and receiver by following the link.

A transmitter consists of a SAW resonator, which is tuned to 433MHz frequency, a switching circuit, and a few passive components. 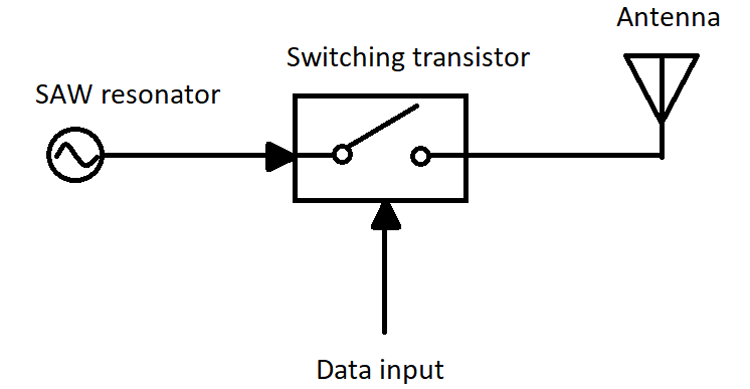 An RF receiver is a simple circuit that consists of an RF tuned circuit, an amplifier circuit, and a phase lock loop circuit.

A phase lock loop circuit (PLL) is a circuit that is used in types of equipment in which we want a highly stable frequency from a low-frequency reference signal. A PLL is a negative feedback system that consists of a voltage-controlled oscillator and a phase comparator connected in such a way that the oscillator frequency always matches the input signal as shown below. 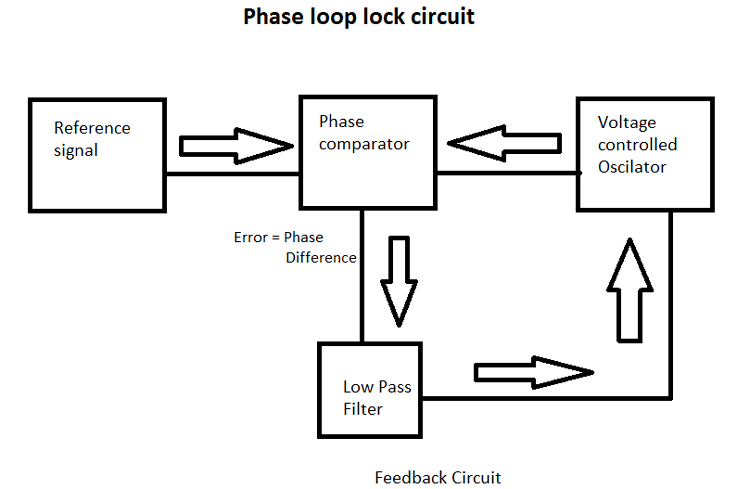 With all these components, the receiver receives the signal from the antenna which is  then tuned by RF tuned circuit and this weak signal is amplified using OP-Amp, and this amplified signal is further used as input to PLL, which makes the decoder to lock onto the incoming digital bits which gives an output which is less in noise.

Modulation is a process of converting data into electrical signals, and these modulated signals are used for transmission. We modulate the signals so that we can separate the necessary signal from other signals. Without modulation, all the signals having the same frequencies will get mixed, which will lead to error. There are many types of modulation the popular ones are Analog Modulation, Digital Modulation, Pulse Modulation, and Spread Spectrum.

In Amplitude Shift key modulation, the sinusoidal carrier will keep on generating continuous high-frequency carrier, and the signal which is to be modulated will be in the binary sequence, and these signals make the input to the switching circuit to be either high or low.

Our wireless doorbell project will require a transmitter and receiver circuit each with its own Arduino board. The Circuit diagram for Doorbell Transmitter is shown below 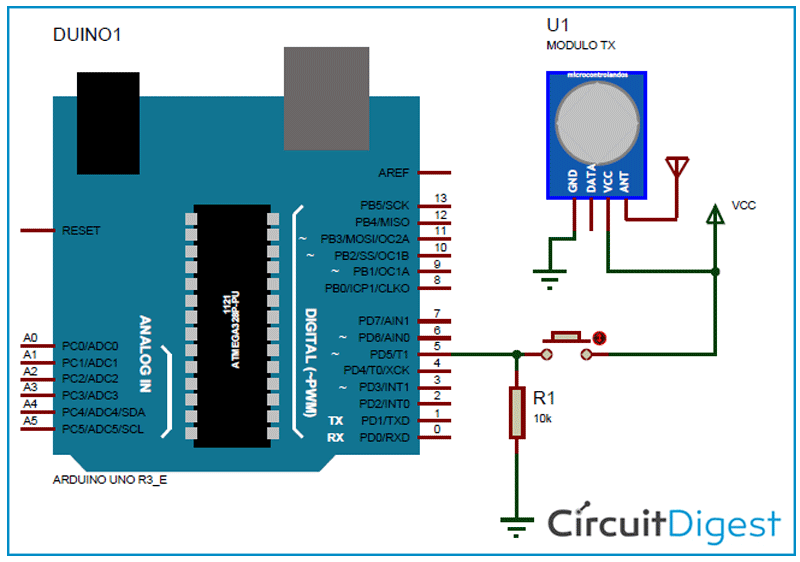 In here I used a breadboard for connecting the modules, and a push-button is used as a doorbell switch.

Similarly, on the receiver side, we need to use another Arduino board with the RF receiver module. Then the Arduino Doorbell Receiver circuit also has a buzzer is to play some melody when the button is pressed. 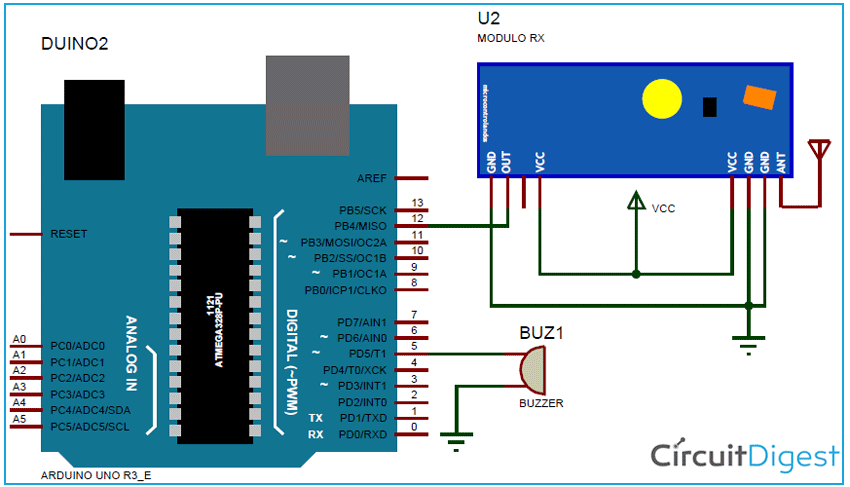 The receiver module consists of 4 pins in which one pin is grounded, and another one pin is for giving VCC supply, and the remaining two pins are used for data transfer. In the above diagram, a buzzer is connected to the digital 7th pin of the Arduino, and the 12th pin of the Arduino is connected to the receiver module output pin.

The complete code for the Arduino transmitter part is given at the bottom of this page. The explanation of the code is as follows.

These are the header files which are needed to be included to send or receive the data using the RF module. These libraries make the connection between the Arduino and the module simple. Without these, you have to manually write the code for connecting the RF module with the Arduino. An object is created “driver” to access the commands used for sending and receiving the data. You can download the Radio Head Library for Arduino from Github.

Serial.begin() is used to find whether the RF transmitter module is working or not and I have initialized the PIN 5 (digital pin 5) as an Input pin and this acts as a door-bell switch.

This code is used to print the message “init failed” when the RF TX module does not initialize at starting of the program and this run only ones.

The if function checks whether the pin is logic HIGH or LOW, i.e. if the doorbell switch is on the state or in an off state. The pointer msg contains the message which we want to send through a transmitter. One note is that we must know the number of characters we need to send. This will help in writing the receiver code.

The strlen() command checks the length of the message, which is 1 in this case. The driver.send() commands sends the data to the tx module which are converted into waves. The command driver.waitPacketSent() is used to wait until the data is sent.

The Receiver program is also given at the end of this page below the Transmitter code or it can be downloaded from here. You can directly use it with your hardware; the code explanation is as follows.

These are the header files that are created for the code to equate the values of frequency to a particular note and get the note values to get the musical tone. If you want to know more about pitches.h or how to play the melody with Arduino and buzzer you can refer to this Melody using Tone() Function tutorial.

An object is created “driver” to access the commands used for sending and receiving the data.

To print messages in the serial monitor. Then the if condition checks if the initialization is failed or not.

This whole code deals with the notes, pitches, and duration to be taken to the required melody

This code checks whether we received the correct data and if the received signal is correct it plays the song.

The transmitter module, along with the Arduino is connected near the door, and the receiver module, along with Arduino, can be installed in any part of the room. When someone presses the switch, it sends the high pulse to the 5th pin of Arduino, which is connected near the door along with the transmitter module. In our Receiver code, we wrote a command- digitalRead(5), this command makes the Arduino, to keep on reading this pin. When this pin gets HIGH, Arduino transmits data through the transmitter, and these signals are received by the receiver. The Arduino, which is connected to a buzzer, reads these signals, and when the desired data is received, the if function is satisfied, and the code will initiate the function, Play_Pirates() and the music will start to play. 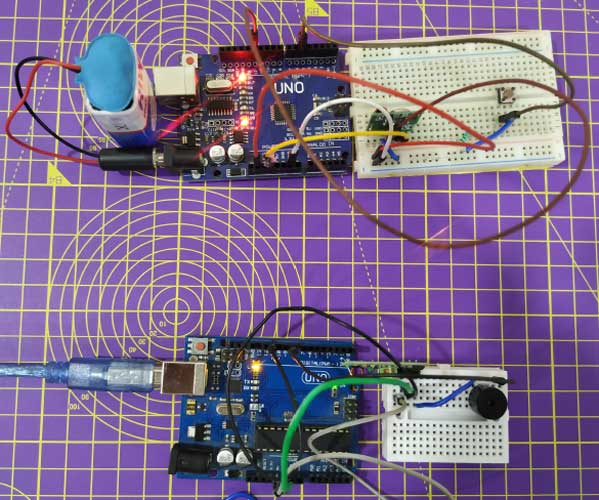 The complete working of Arduino based wireless Doorbell project can be found in the video linked at the bottom of this page. Hope you understood the project and enjoyed learning something useful, if you have any questions please leave them in the comment section. For other technical quires use the forums.

Complete code is given below or it can be downloaded from this link.

By the Transmitter you say: Pin 11 is connected to the data pin of the transmitter module.

Is not market in the schematic. Is it connected or not?

By the Reciever you say: Here, we connect pin 7 of the Arduino to the buzzer positive terminal. But in the schematic is on the pin D5

you say: The out pin of the receiver module is connected to the 12th pin of the Arduino.

Here I have a problem see your picture from 433 MHz RF Module, 4 pins, the first is VCC the last one GND, the two in the middle I dont now.

In jour foto from the Reciever I see the Gray is the VCC and the Green is the GND and i Black go to pin D8. Wer is the Black connected, on the second or the third pin from the module?

In the code from the Reciever you say: noTone(8); //stop music on pin 8. But there is nothing conneted on pin D8

Project works but has some

Project works but has some bugs. Buzzer should be connected to pin 8 and GND. The output from the receiver goes to pin 11.