Digital load scales are another miracle of modern-day engineering and design. Yes, we are talking about the weighing scale we often see in most of the grocery stores and other places, but have you ever wondered how a weight scale work? To answer that question, in this project, we are going to take a look at the load cell and its working. Finally, we will be building a portable Arduino-based load scale with the HX711 Weight Sensor, which can measure weights up to 10kg.

This weighing machine is perfect for local stores, where they pack items in bulk quantity. Like commercial products, our weight scale will have a zero button that zeroes out the scale. Also, It has an option to set weight for measurement, when the measuring weight reaches the set weight, a buzzer beeps fast and stops when the set weight equals the measuring weight. This way, the user can pack it just by hearing the sound and would not have to look at the display. As this is a very simple project, we will be building this very easily using components like Arduino and strain gauge load cell. So, without further delay, let's get right into it.

In a previous article, we have made projects like Raspberry Pi Based Weight Sensor and IoT Smart Container with Email Alert and Web Monitoring using the popular HX711 load cell amplifier module. So, do check that out if that is your requirement.

A load cell is a transducer that transforms force or pressure into electrical output. It has two sides, let's say the right side and left side, and it's made out of aluminum blocks. As you can see in the middle of the material is thinned by putting a big hole. Which is why that is the point that suffers deformation when a load is placed on the mount side. Now imagine that the right-side cell is mounted to the base and the left side is where the load is placed, this configuration deforms the strain gauge load cell because of the giant hole in the middle. 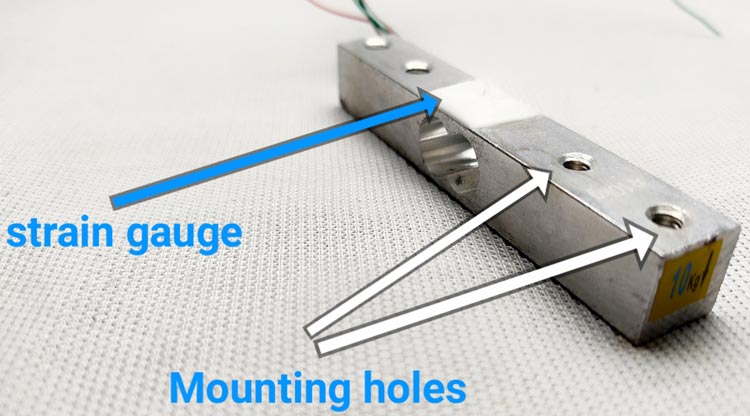 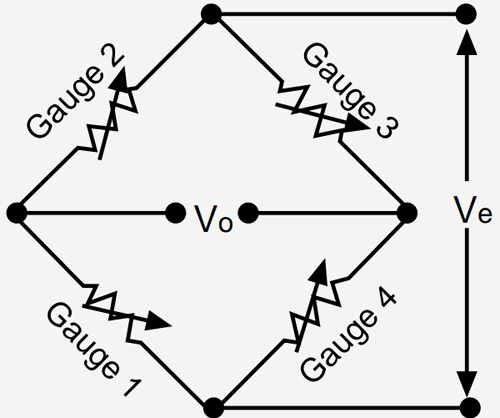 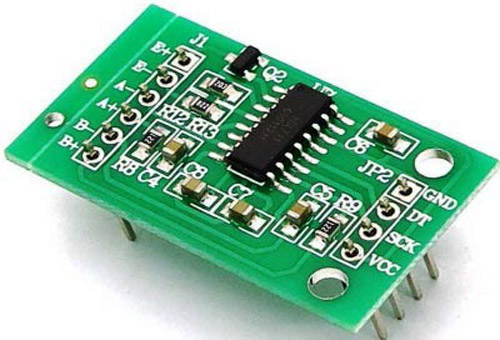 But this voltage change is still very small, so to increase that, we need to use the HX711 module. HX711 is a 24-bit Differential ADC, in this way, we could measure very small voltage changes. it will give values from 0 to 2 exponential 24.

To make this project as simple as possible, we have used very generic components that you can find in any local hobby store. The image below will give you an idea about the components. Furthermore, we have the Bill of Materials (BOM) listed below. 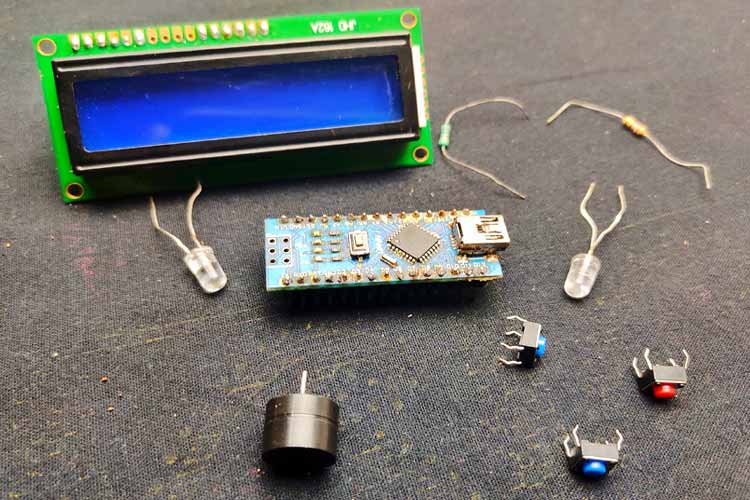 The load cell has four wires which are red, black, green, and white. This color may vary according to the manufacturers, so it's better to refer to the datasheet. Connect red to E+ of HX711 board, connect black to E-, connect white to A+, and connect green to A-, Dout, and clock of the board connect to D4 and D5 respectively. Connect one end of push buttons to D3, D8, D9, and other ends to the ground. We have I2C LCD, so connect SDA to A4 and SCL to A5. Connect the ground of LCD, HX711, and Arduino to the ground, also connect VCCs to the 5Vpin of Arduino. All the modules work on 5V, so we have added an LM7805 voltage regulator. If you don't want it as portable, you can directly power the Arduino using a USB cable.

Making the Circuit on a Dotted Perfboard

We have soldered all the components on a common dotted perfboard. We used female headers to solder the Arduino and ADC with the circuit board, also we have used wires to connect all the pushbuttons and LEDs. After all the soldering process is finished, we have made sure that proper 5V is coming out of the LM7805. Finally, we have put a switch to power on/off the circuit. Once we were all finished, it looked like the image below. 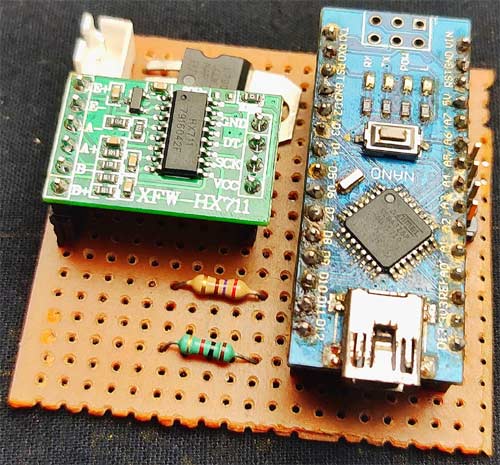 Building an Enclosure for Arduino Based Weighing Machine

As you can see, the load cell has some screw threads, so we could mount it on a base plate. We will be using a PVC board for the base of our scale, for that, we first cut 20*20 cm square and four 20*5 rectangles from the PVC board. Then using hard glue, we glued every piece and made a small enclosure.

Remember, we didn't fix one side, because we need to place the pushbuttons, LEDs, and the LCD on it. Then we used a plastic board for the top of the scale. Before making this setup permanent, we need to make sure that we have sufficient space from the ground to the load cell, so it will be able to bend, so we placed screw and nuts in between the load cell and the base, also we added some plastic spacers in between the load cell and top part. we used a round plastic sheet as the top smart of balance.

Then we placed the LCD, LEDs, and push-buttons to the front panel, and everything connected with long insulated wire. After we finished the wiring process, we glued the front panel to the main base with some inclination, so we can read the values from LCD very easily. finally, we attached the main switch to the side of the balance and that's it. This is how we made the body for our weight scale.

You can design with your ideas but remember to place the load cell-like as in the image. 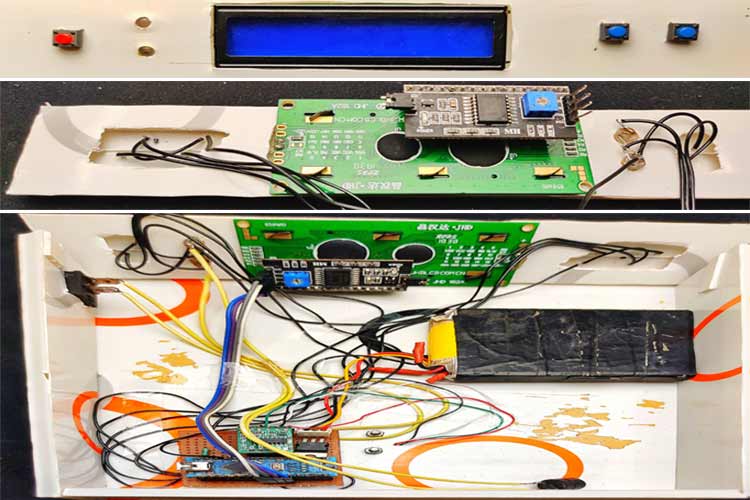 As we are now finished with the build process for our digital scale, we can move onto the programming part. For easy programming, we are going to use the HX711 library, EEPROM Library, and the LiquidCrystal library. You can download the HX711 library from the official GitHub repository, or go to tools > include library > manage library, then search library using keyword HX711, after downloading the library, Install it into Arduino ide.

First, we need to calibrate the load cell and store that value on EEPROM, for that, go to file > examples > HX 711_ADC, then select the calibration code. Before uploading the code, place the balance on a stable plane surface. Then upload the code to Arduino and open the serial monitor. Then change the baud rate to 572600. Now monitor ask to take the weight, for that we need to press t and enter.

In the coding section, first, we added all three libraries. The HX711 library is for taking the load cell values. EEPROM is the inbuilt library of Arduino ide, which is used to store values in EEPROM and the LiquidCrystal library is for the l2C LCD Module.

Then defined integers for different pins and assigned values. HX711_ADC loadcell function is for setting the Dout and clock pin.

In the setup section, first, we started the serial monitor, this is just for debugging only. Then we defined the pin modes, all push buttons are defined as input. With help of the Arduino PULL UP function, we set the pins to a logical high at normally. So, we don't want to use any external resistors for that.

Then started to read the values from loadcell using loadCell.begin() function, after that, we read the EEPROM for the calibrated values, we do that by using the EEPROM.get() function. That is, we already stored the value using calibration sketch in the EEPROM address, we just retake that value.

In the loop section, first, we check if any data from the load cell is available using LoadCell.update(), if available, we read and store that data, for that, we are using LoadCell.getData(). Next, we need to display the stored value in LCD. To do that, we used the LCD.print() function. also, we print the set weight. Set weight is setting with the help of the Pushbutton counter. That explained in the last section.

Now, we need to set the conditions for different indications like setting the delay of the buzzer and the led status. We did that using if conditions, we have a total of three conditions. First, we calculate the difference between set weight and measuring weight, then stored that value in the variable k.

1. If the difference between set weight and measuring weight is greater than or equal to 50gms, the buzzer beeps with a 200-millisecond delay (slowly).

2. If the difference between set weight and measuring weight is lower than 50 and greater than 1 gram, the buzzer beeps with a 50-millisecond delay (faster).

3. When the measuring weight equals or greater than the set value, this will turn on the green led and off the buzzer and red led.

We have two more void functions () for setting the set weight (for counting the button press).

The function increasing the set value by 10gms for each press. This is done by using the digitalRead function of Arduino if the pin is low that means the button is pressed and that will increment the value by 10gms.

checkdown is for decreasing the set value by 10gms for each press.

This marks the end of the programming part. 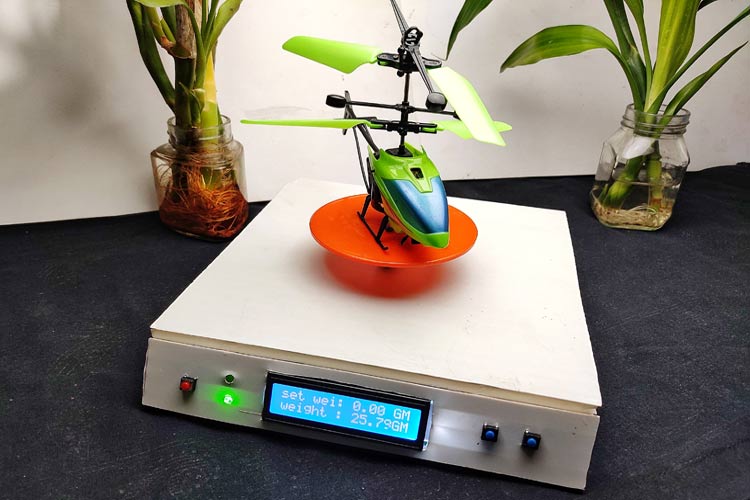 This Arduino based electronic scale is perfect for measuring the weights up to 10kg (we can increase this limit by using a higher rated loadcell). This is 99% accurate to original measurements.

If you have any questions regarding this Arduino based LCD weight balance machine circuit, please post it in the comment section, thank you!