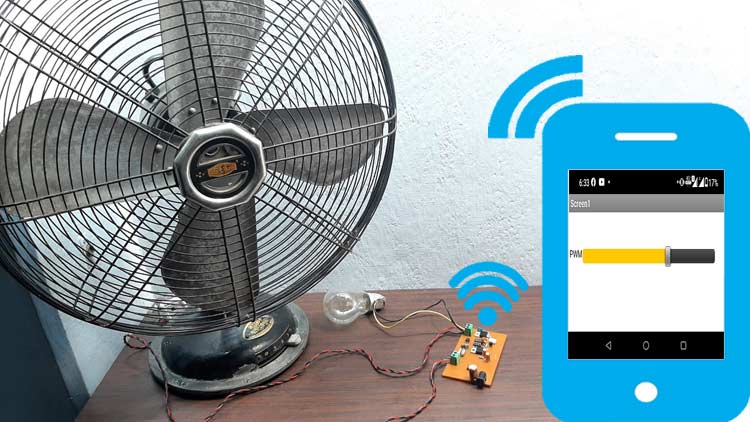 Working of an IoT based Ceiling Fan Regulator

The Fan Regulator circuit is a simple circuit that is able to control the speed of an AC ceiling fan by altering the phase angle of the AC sine wave or in simple terms precise control of the TRIAC. As I have mentioned all the basic workings of the AC fan regulator circuit in the AC Phase Angle Control with 555 Timer and PWM article, we will be concentrating on the actual building of the circuit. And again if you want to know more about the topic, please also check the article on AC Light Dimmer using Arduino and TRIAC Project.

In this case, the android app alters the value in the firebaseDB and the ESP is constantly checking for any changes that are happening to that DB if any change occurs that gets pulled down and the value is converted to a PWM signal

The image below shows the material used to build this circuit, as this is made with very generic components, you should be able to find all of the listed material in your local hobby store.

I have also listed the components in a table below with type and quantity since its a demonstration project, I am using a single channel to do so. But the circuit can be easily scaled up as per requirement.

The schematic for the IoT fan regulator circuit is shown below, this circuit is very simple and uses generic components to achieve phase angle control.

This circuit is made up of very carefully designed components. I will go through each one and explain each block.

This is the first part of our circuit and it's the part where we have changed a lot of things, other parts stay exactly the same, i.e if you have followed the previous article. 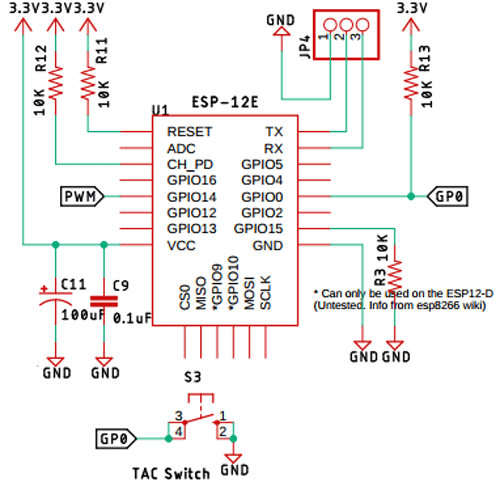 In this section, we have pulled up pins Enable, Reset, and GPIO0, also, we have pulled down GPIO15 and the Ground Pin, which are recommended by the datasheet of the chip. As for programming, we have placed a 3pin header exposing the TX, RX, and the ground pin through which we can program the chip very easily. Also, we have put a tactile switch to put the GPIO0 to ground, this is a necessary step to put the ESP in programming mode. We have selected the GPIO14 pin as output through which the PWM signal is generated.

Note! At the time of programming, we have to press the button and power the device with the DC barrel jack.

First, on our list is the zero-crossing detection circuit made with two 56K, 1W resistors in conjunction with four 1n4007 diodes and a PC817 optocoupler. And this circuit is responsible for providing the zero-crossing signal to the 555 timer IC. Also, we have taped off the phase and the neutral signal to further use it in the TRIAC section. 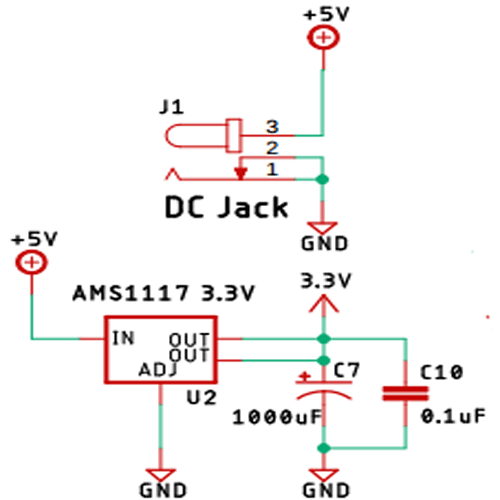 The AMS1117 voltage regulator is used to power the circuit, the circuit is responsible for providing power to the whole circuit. Additionally, we have used two 1000uF capacitors and a 0.1uF capacitor as a decoupling capacitor for the AMS1117-3.3 IC. 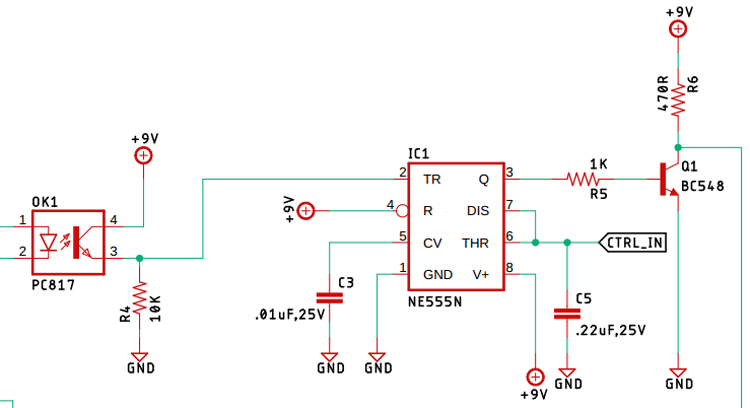 TRIAC and the TRIAC-Driver Circuit:

The TRIAC is acting as the main switch which actually turns on and off thus controls the output of the AC signal. Driving the TRIAC using the MOC3021 Opto-Triac-drive, it doesn't only drive the TRIAC, but it also provides optical isolation,  the 0.01uF 2KV high voltage capacitor, and the 47R resistor forms a snubber circuit, which protects our circuit from high voltage spikes which occur when it's connected to an inductive load, The non-sinusoidal nature of the switched AC signal is responsible for the spikes. Also, it is responsible for power factor issues, but that is a topic for another article.

Lowpass-Filter and P-Channel MOSFET (Acting as the Resistor in the Circuit):

The 82K resistor and the 3.3uF capacitor forms the low pass filter which is responsible for smoothing out the high-frequency PWM signal generated by the Arduino. As previously mentioned, the P-Channel MOSFET acts as the variable resistor, which controls the charging time of the capacitor. Controlling it is the PWM signal which is smoothed out by the low-pass filter.

The PCB for our IoT Ceiling Fan Regulator circuit is designed in a single-sided board. I have used Eagle PCB design software to design my PCB but you can use any design software of your choice. The 2D image of my board design is shown below.

Sufficient ground filling is used to make proper ground connections among all the components. The 3.3V DC input and the 220 Volt AC input is populated at the left-hand side, the output is located on the right-hand side of the PCB. The complete design file for Eagle along with the Gerber can be downloaded from the link below.

For convenience, I made my handmade version of the PCB and it's shown below.

With this, our hardware is ready as per our circuit diagram, now we have to get our android application and Google firebase ready.

Doing so will redirect you to a page that looks like the image above. Type the name of your project and click continue.

Once you do, you need to agree to some terms and conditions by clicking on the checkbox, next, you need to click on the create project button.

If you have done everything correctly, after some time, you will get a message like this. Once finished, your firebase console should look like the image below.

Now we need to collect two things from here. To do that, you need to click on the name of the project that you have just created. For me, it is CelingFanRegulator, once you click on it, you will get a dashboard similar to the image below.

Copy the database secret and keep it someplace for later use.

Next, click on the real-time database and copy the URL. also keep that for later use.

And that's all, there is to the firebase side of things.

A simple Arduino code takes care of the communication between firebase and the ESP-12E module, the circuit and code explanation is given below, First, we define all the necessary libraries required, you can download the following libraries from the given links Arduino JSON library and FirebaseArduino library

We will be using the FirebaseArduino library to establish communication with firebase.

Next, we have defined a string type variable, Resivedata where all the data will be stored and we also defined the PWM_PIN where we will get the PWM output.

Next, in the void setup() section, we do the necessary,

First, we enable the serial by calling the Serial.begin() function. Next, we have set the PWM pin as OUTPUT. We begin the Wi-Fi connection with the help of the WiFi.begin() function and we pass the SSID and Password in the function. We check the connection status in a while loop and once connected, we break the loop and continue on. Next, we print the connected message with the IP address.

Finally, we begin the communication with the firebase with Firebase.begin() function and we pass the FIREBASE_HOST and FIREBASE_AUTH parameters which we have defined earlier. And we set the string with the setString() function, which marks the end of the setup function. In the void loop() section,

We call the getString() function with Variable/Value where the data is stored in the firebase, an example would be like the image below-

Then we print the value just for debugging. Next, we use the map function to map the value, 80 is used because within the range of 0 - 80, we are able to control the gate of the MOSFET accurately, and the RC lowpass filter is somewhat responsible for this value. Within this range, the phase angle control circuit operates accurately, you may call the value as a hardware-software sweet spot. If you are doing this project and face issues, you need to play with the value and determine the results yourself.

With the help of AppInventor, we are going to make an android app that will communicate with the firebase and has the authority to change the data which is stored in the firebase database.

Click on the start a new project icon and give it a name and hit OK, once you do, you will be presented with a screen like the below image. 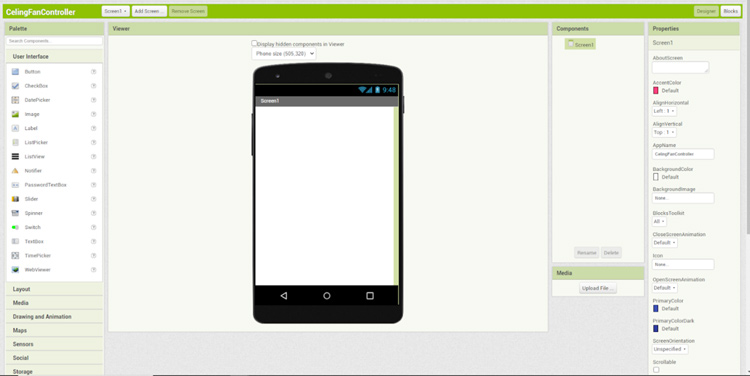 Once there you need to first put two labels, where this is to put the slider a little bit down, next you need to pull in some modules and they are the FirebaseDB module and the web-module.

The firebaseDB module communicates with the firebase, the web module is used to handle the Http request. Which looks like the image below. 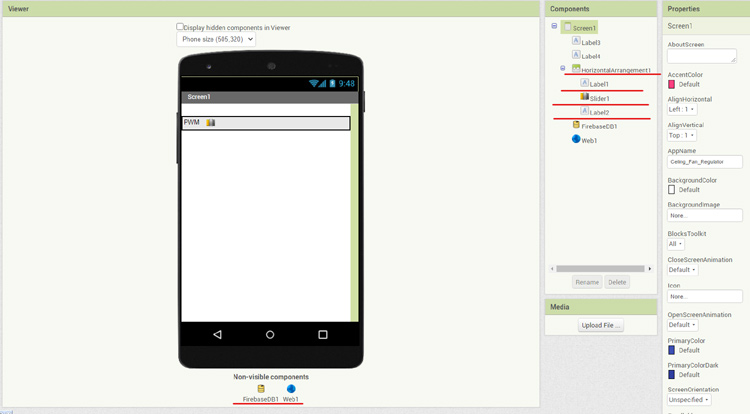 Once that is done, you need to pull in the slider and a label which we named PWM, if you are getting confused at this moment, you can check out some other tutorials regarding making an app with an app inventor. 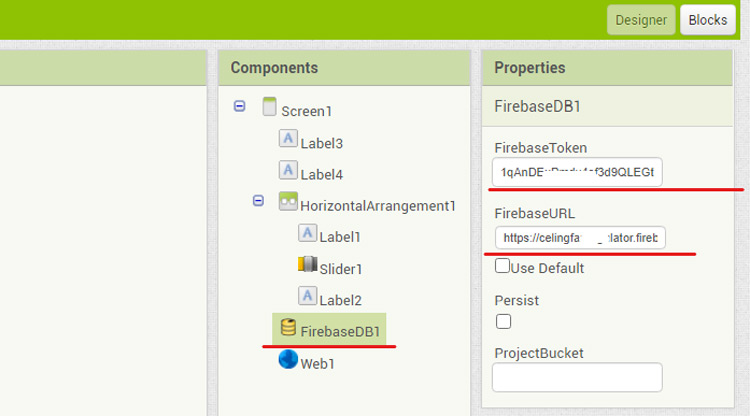 Now, we are done with the design section and we need to set up the block section. To do that, we need to click the block button in the upper right corner beside the designer.

Once click on the slider and you will be presented with a long list of modules, pull out the first module, and hover your mouse over the thumb-position button, you will be greeted with two more modules, pull both of them out. We are going to use those later.

Once done, we pull out an empty textbox by clicking the text block and attach it with the tag, this is the tag which we have set in the Arduino IDE to read and write the data on firebase. Now attach the thumb value variable to the value to store tag. If you have done everything correctly, by moving the slider, you will be able to alter the values in the firebaseDB.

Which marks the end of our app making process. A snapshot of the android application that we just created shown below. 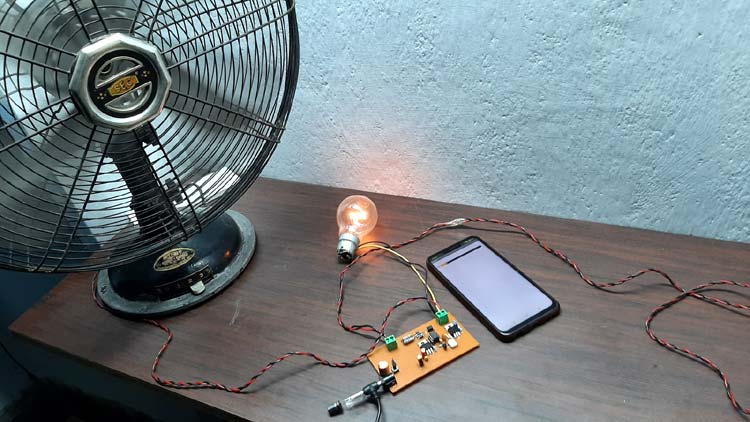 To test the circuit, I have connected an incandescent light bulb parallel to the ceiling fan, and I have powered the circuit with a 5V DC adapter, as you can see in the above picture, the app slider is set to low, that is why the bulb is glowing at low brightness. And the fan is also rotating slowly.

For this demonstration, the circuit is made on a handmade PCB but the circuit can be easily built on a good quality PCB, in my experiments, the size of the PCB is really bit due to the component size, but in a production environment, it can be reduced by using cheap SMD components, I found using a 7555 timer instead of a 555 timer increase the control extensively, furthermore, the stability of the circuit increases as well.

Thank you very much. This

Thank you very much. This article helps me to learn Firebase and MIT app inventor too.