Getting Started with Sony Spresense Devkit 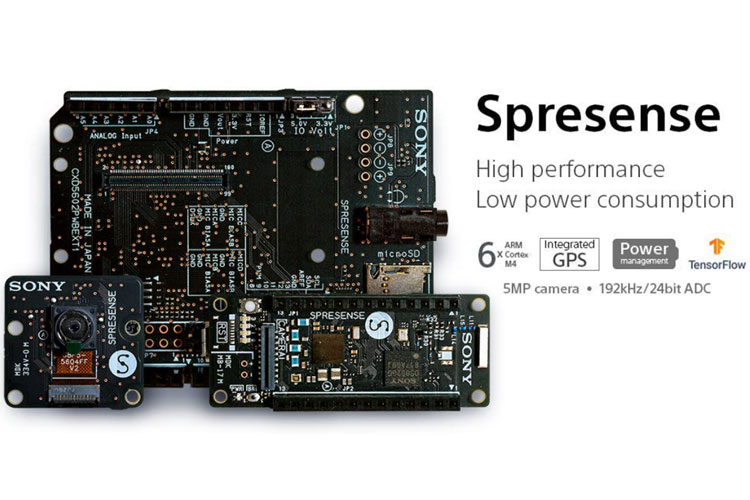 Ever wondered if your everyday Arduino boards were just not enough for your tasks, and a Raspberry Pi (RPi) seemed to be overkill? Have you wished for something that was between the two, having more hardware resources and capabilities than your typical microcontroller, but being low power and efficient enough to last for days, unlike a micro-computer like RPi? Sony has a solution for these problems, and it comes in the form of Sony’s Spresense development kit, which according to me is by far one of the most lucrative, versatile, and easy-to-use development kits there is!

You can check out how to use Spresense Devkit:

What is Spresense Devkit and Ecosystem?

The Spresense devkit is a recent offering from the Sony Group, that is unlike its other products. It to my knowledge, is one of the very few embedded solutions developed by Sony, as a devkit for its CXD5602 microcontroller chip, which contains a whopping 6 (advertised, actually it has an extra M0 and M4 core along with these 6) Arm-Cortex-M4F core count and (would you believe it!) an inbuilt GPS! It also contains the CXD5247 coprocessor to handle audio and power management. These functions themselves make the devkit way more unique than any other microcontroller I can think of. Details of the chips can be found here. The Devkit priced at around 130$ on Adafruit is comprises of 3 components:

It is the Tiny board in an Arduino Nano equivalent form factor on the lower right corner of the image above. A closer view:

If you look closely, the CXD5602 chip is covered by a black shading seal, as Sony claims it might be affected by very strong light. It can go up to 156 MHz, 1.5MB RAM, and 8MB of Flash memory, all of which are huge for a microcontroller. The board is tiny, measuring just 50mm by 20.6mm, and contains an inbuilt GPS. The second chip CXD5247 is a coprocessor of sorts, handling audio and power management functions. It has a number of connectors too, one for the camera board and 2 breakout header strips on the top, and one for the connections with the Extension board. It has an integrated FTDI chip so you can directly upload the code using a micro USB cable. The board has a lot of pins available, even without the extension board –

The board itself works on 1.8V, making it extremely power efficient. There are a lot of features in this teeny-tiny board, but to make full use of its capabilities, you need -

It is a complementary board in Arduino Uno form factor that allows you to utilize the audio and SD card-related features of the main board. The kit comes with 4 standoffs/spacers to attach the main board correctly with the Extension Board: 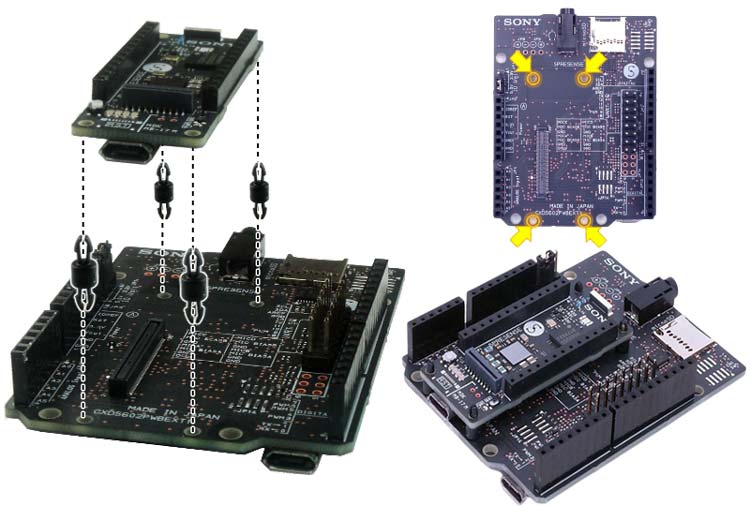 It operates on 3v3 and 5V levels. A complete overview of the multiplexing of its pins is given below: 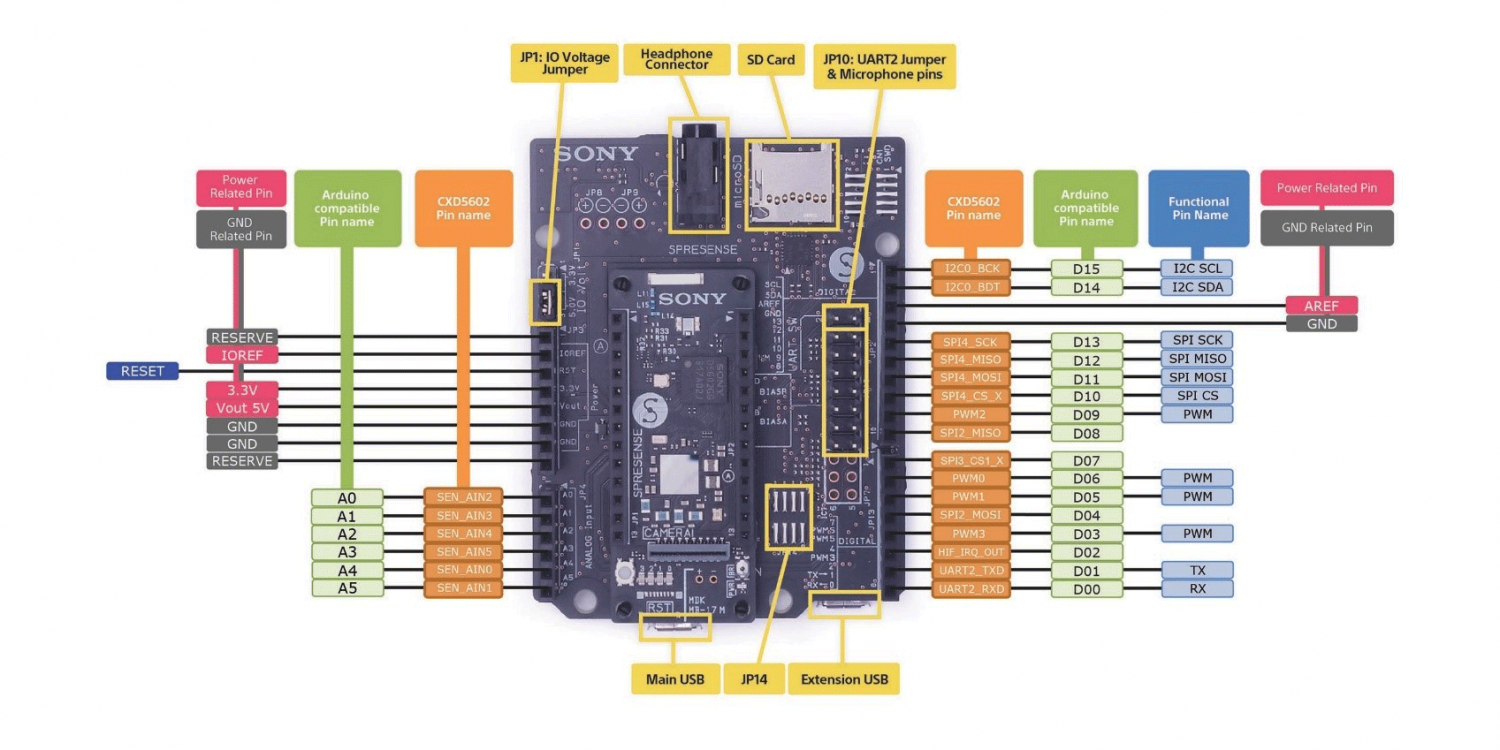 It goes into the connector on the top of the mainboard. 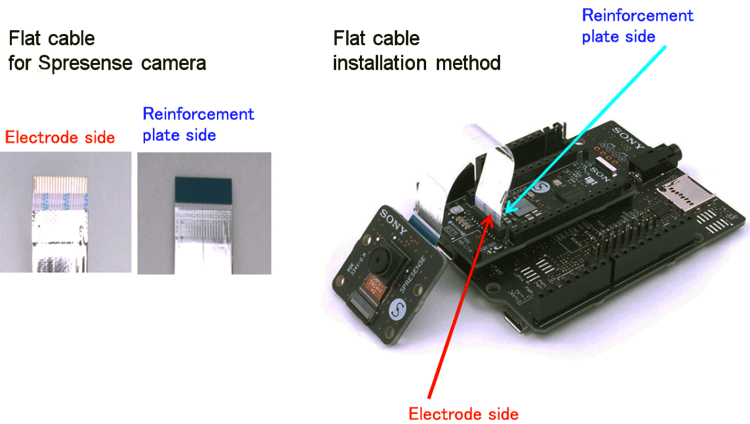 The camera board has a Sony (Obviously!) camera sensor with a 78 deg FOV and 5MP resolution. It can be inserted directly into the connector on the top of the main board as shown. This camera board is extremely useful for computer vision-based projects, especially since this board is officially supported by the Edge Impulse platform.

Detailed specs of all three components can be found here

As of February 2022, a fourth board is officially set to release separately from the devkit. It will enable LTE functionality for the Spresense main board and will contain a nano-SIM holder. It is currently available in EU and US versions as mentioned here

What’s needed to try it out?

You will need at least the mainboard to start using the Spresense SDK on Arduino or other platforms. The official Extension board and add-ons allow other functionalities but you can choose to design your own carrier board with the functionalities you want. For any computer vision-related project, a camera board will also be needed.

As for the software side, Spresense is compatible with:

For TinyML and computer vision models, you can use Edge Impulse or TensorflowLite.

How to start using Spresense?

Well, you can start by buying the kit from Adafruit or some local Indian website (this site seems to have it: https://www.mgsuperlabs.co.in/estore/. Once you have all the parts, you can assemble the parts and go through the official documentation here. Then, you can refer to its software ecosystem here and decide which platform/development approach you wish to pursue.

Arduino-based approach might be the best for beginners, while Circuitpython can be used by intermediate developers. The SDK can be used by seasoned developers who wish to create commercial products using the CXD chips. For Arduino, you can refer to this getting started guide which shows how to install the Spresense library and run examples. I have provided a demo video for the Camera example, to give you a basic idea.

However, there are a lot of limitations as well:

Frankly, it is an excellent developer board to have, especially if you want to switch from Arduino to commercial firmware development. I will soon be back with an edge impulse project on this board to show you guys its image classification capabilities. If you have any questions, please leave them in the comment section below or use our forum to start a discussion on this.