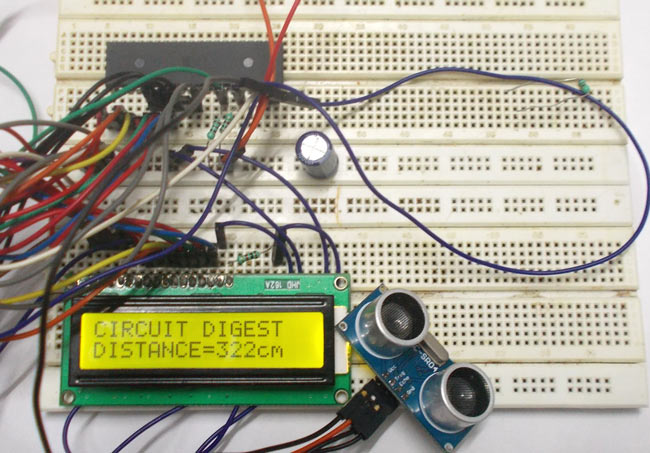 In this tutorial we are going to discuss and design a circuit for measuring distance. This circuit is developed by interfacing ultrasonic sensor“HC-SR04” with AVR microcontroller. This sensor uses a technique called “ECHO” which is something you get when sound reflects back after striking with a surface.

Ultrasonic sensor “HC-SR04” provides an output signal proportional to distance based on the echo. The sensor here generates a sound vibration in ultrasonic range upon giving a trigger, after that it waits for the sound vibration to return. Now based on the parameters, sound speed (220m/s) and time taken for the echo to reach the source, it provides output pulse proportional to distance.

As shown in figure, at first we need to initiate the sensor for measuring distance, that is a HIGH logic signal at trigger pin of sensor for more than 10uS, after that a sound vibration is sent by sensor, after a echo, the sensor provides a signal at the output pin whose width is proportional to distance between source and obstacle.

Here the width of the signal must be taken in multiple of uS(micro second or 10^-6).

Here we are using PORTB to connect to LCD data port (D0-D7). Anyone who does not want to work with FUSE BITS of ATMEGA32A can not use PORTC, as PORTC contains a special type of communication which can only disabled by changing FUSEBITS.

In the circuit, you observe I have only took two control pins, this give the flexibility of better understanding. The contrast bit and READ/WRITE are not often used so they can be shorted to ground. This puts LCD in highest contrast and read mode. We just need to control ENABLE and RS pins to send characters and data accordingly.

PIN1 or VSS to ground

PIN4 or RS (Register Selection) to PD6 of uC

In the circuit you can see we have used 8bit communication (D0-D7) however this is not a compulsory and we can use 4bit communication (D4-D7) but with 4 bit communication program becomes a bit complex. So as shown in the above table we are connecting 10 pins of LCD to controller in which 8 pins are data pins and 2 pins for control.

The ultrasonic sensor is a four pin device, PIN1- VCC or +5V; PIN2-TRIGGER; PIN3- ECHO; PIN4- GROUND. Trigger pin is where we give trigger to tell the sensor to measure the distance. Echo is output pin where we get the distance in the form of width of pulse. The echo pin here is connected to controller as an external interrupt source. So to get the width of the signal output, the echo pin of sensor is connected to INT0 (interrupt 0) or PD2.

Now for getting the distance we have to program the controller for the following:

1. Triggering the sensor by pulling up the trigger pin for atleast 12uS.

2. Once echo goes high we get an external interrupt and we are going to start a counter (enabling a counter) in the ISR (Interrupt Service Routine) which is executed right after an interrupt triggered.

3. Once echo goes low again an interrupt is generated, this time we are going to stop the counter (disabling the counter).

4. So for a pulse high to low at echo pin, we have started a counter and stopped it. This count is updated to memory for getting the distance, as we have the width of echo in count now.

5. We are going to do further calculations in the memory to get the distance in cm

6. The distance is displayed on 16x2 LCD display.

For setting up the above features we are going to set the following registers:

The above three registers are to be set accordingly for the setup to work and we are going to discuss them briefly,

BLUE (INT0): this bit must be set high to enable the external interrupt0, once this pin is set we get to sense the logic changes at the PIND2 pin.

BROWN (ISC00, ISC01): these two bits are adjusted for the appropriate logic change at PD2, which to be considered as interrupt.

RED(CS10): This bit is simply to enable and to disable counter. Although it works along with other bits CS10, CS12. We are not doing any prescaling here, so we need not worry about them.

Some important things to remember here are:

We are using internal clock of ATMEGA32A which is 1MHz. No prescaling here, we are not doing compare match interrupt generate routine ,so no complex register settings.

The count value after counting is stored in 16bit TCNT1 register.

Working of Distance Measurement sensor is explained step by step in the below C program.

If you change the fuse bits

When i - 1, the ISR completes the block for i =1 and then jumps to the block for i = 0 , why is it needed? why isnt it written as an else if block? Your reply would be much appreciated, sir.

This is a trick to set a

Hi,
thank you for the great code, but why don't you use the Input Capturing Pin PD6?

Hello Dilip, You have done excellent job! Simply your article is containing everything: showing the circuit diagram, source code explanation. I built your project in 10 minutes and it was working smoothly, no errors, no mistakes! Thank you very much, keep going with publishing this way! :o) Miroslav (Czech Republic, Europe)

What precision of distance ?

At 1Mhz what precision of measuring distance ?

'DDRA ' and 'GICR' was not declared in this scope, having this problem during compiling the code.

Include all the libraries

Include all the libraries properly specifically interrupt.h.

can i control ultrasonic with codeviosion

Where is the lcd library Sir?

Thank you for the great work

Thank you for the great work on this tutorial. I am however confused by the use of the 1000uF capacitor...I am afraid I do not understand what it is used for from the circuit diagram. Can you please shed some light on this? Thank you in advance.

hi all ,when i compiled this programme GICR undeclared error occurred pls help me
how can i solve this declaration in interrupt lib

what is the work of master slave comunication ...
does it wil work if i simply do not atteche the programer port?

Speed of a sound

Dilip,
Thanks for a kind explanation.
The speed of a sound appears 340 meter per sec I guess?
For better accuracy,
COUNTA = pulse/58; may be rewritten to COUNTA = pulse/59?

In your code you use INT0 pin

In your code you use INT0 pin ,this pin is used for the 8 bit counter TCNT0
Then you use TNTC1 the 16 bit counter to count the pulses
What part of the code connects TCNT1 to the internal oscillator to count?

Since the ATMEGA32A and ATMEGA 32 is pretty much similar, I think the code should be the same.

How does he program vary if I

How does he program vary if I use an ATmega16 ?

Sir i have a project distance measurement using mcu168.. Can i have the complete code without using arduino..Thanks in advance

Works fine and helped a lot to get it done faster. However I'm wondering weather the ISR is correct. I've the impression that the if(i==0) should rather be an else clause, otherwise the statement is always true and executed, or not?

Have a great Sunday
Peter

Is there any possible way for this project to connect with buzzer. I have a project using the distance sensor to control the audio tone.

What code should I implement into this code in order to allow it to control buzzer?