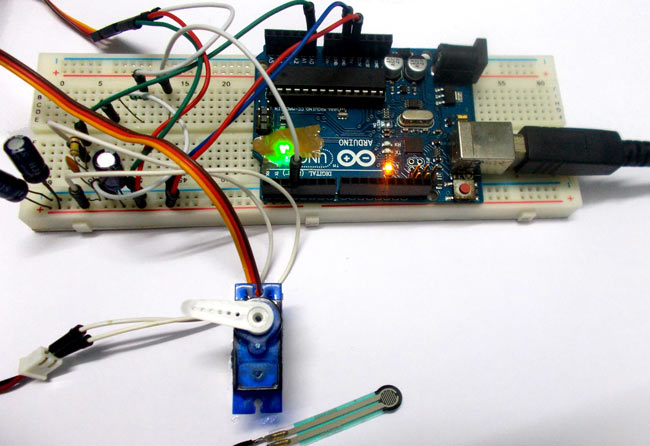 In this tutorial we will develop a circuit using Force sensor, Arduino Uno and a servo motor. It will be a servo control system where the servo shaft position is determined by the weight present on the force sensor. Before going any further let’s talk about about the servo and other components.

A servo motor is a combination of DC motor, position control system, gears. The position of the shaft of the DC motor is adjusted by the control electronics in the servo, based on the duty ratio of the PWM signal the SIGNAL pin. Simply speaking the control electronics adjust shaft position by controlling DC motor. This data regarding position of shaft is sent through the SIGNAL pin. The position data to the control should be sent in the form of PWM signal through the Signal pin of servo motor.

The frequency of PWM (Pulse Width Modulated) signal can vary based on type of servo motor. The important thing here is the DUTY RATIO of the PWM signal. Based on this DUTY RATION the control electronics adjust the shaft.

This ratio is decoded by control system in servo and it adjusts the position based on it.

This PWM in here is generated by using ARDUINO UNO.

So for now we know that, we can control the SERVO MOTOR shaft by varying the duty ratio of PWM signal generated by UNO.

To interface a FORCE sensor with ARDUINO UNO, we are going use 8 bit ADC (Analog to Digital Conversion) feature in arduno uno.

Now it is important to note that the FSR 400 is sensitive along the length, the force or weight should be concentrated on the maze on the middle of eye of sensor, as shown in figure.

If the force is applied at wrong times the device could damage permanently.

Another important thing to know that, the sensor can drive currents of high range. So keep in mind the driving currents while installing. Also the sensor has a limit on force that is 10Newtons. So we can apply only 1Kg of weight. If weights higher than 1Kg applied the sensor might show some deviations. If it’s increased more than 3Kg. the sensor might damage permanently. 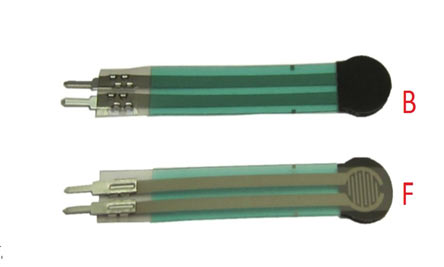 As told earlier this sensor is used to sense the changes in pressure. So when the weight is applied on top of FORCE sensor, the resistance is changed drastically. The resistance of FS400 over weight is shown in below graph: 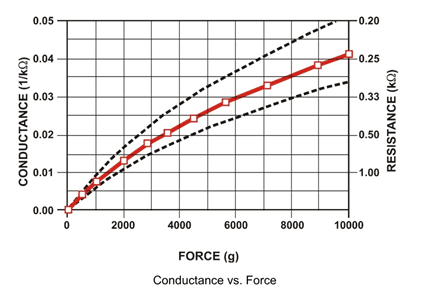 The resistance of a pure conductor is given by:

A= Area of conductor.

So with this for a conductor under pressure or weight the resistance of conductor increases. But this change is small compared to overall resistance.  For a considerable change many conductors are stacked together.

This is what happens inside the Force Sensors shown in above figure. On looking closely one can sees many lines inside the sensor. Each of these lines represents a conductor. Sensitivity of sensor is in conductor numbers.

But in this case the resistance will be decreasing with pressure because the material used here is not a pure conductor. The FSR here are robust polymer thick film (PTF) devices. So these are not pure conductor material devices. These are made up of a material, that exhibit a decrease in resistance with increase in force applied to the surface of the sensor.

This material shows characteristics as shown in graph of FSR.

This change in resistance can do no good unless we can read them. The controller at hand can only read the chances in voltage and nothing less, for this we are going to use voltage divider circuit, with that we can derive the resistance change as voltage change.

The midpoint of branch is taken to measurement. With R2 change, we have change at Vout. So with this we have a voltage which changes with weight.

Now when the force is applied on the FORCE SENSOR, the voltage at divider end changes this pin as connected to ADC channel of UNO, we will get a different digital value from ADC of UNO, whenever force on sensor changes.

This ADC digital value is matched to the duty ratio of PWM signal, so we have the SERVO position control in relation to force applied on sensor.

The circuit diagram for servo motor control by force sensor is shown in below figure.

The voltage across sensor is not completely linear; it will be a noisy one. To filter out the noise a capacitors are placed across each resistor in the divider circuit as shown in figure.

So with weight we have a PWM value which changes its duty ratio depending on digital value. Higher the digital value higher the duty ratio of PWM. So with higher duty ratio PWM signal, the servo shaft should reach the far right or far left as per the figure provided in the introduction.

If the weight is lower, we will have lower PWM duty ratio and as per the figure in introduction the servo should the reach the far right.

With this we have a SERVO position control by WEIGHT or FORCE.

For this to happened we need to establish few instructions in program and we will talk about them in detail below.

Here we are going to use A0 of UNO. We need to know a few things.

First of all the Arduino Uno ADC channels has a default reference value of 5V. This means we can give a maximum input voltage of 5V for ADC conversion at any input channel. Since some sensors provide voltages from 0-2.5V, with a 5V reference we get lesser accuracy, so we have a instruction that enables us to change this reference value.  So for changing the reference value we have (“analogReference();”) For now we leave it as.

As default we get the maximum board ADC resolution which is 10bits, this resolution can be changed by using instruction (“analogReadResolution(bits);”). This resolution change can come in handy for some cases. For now we leave it as.

Now if the above conditions are set to default, the we can read value from ADC of channel ‘0’ by directly calling function “analogRead(pin);”, here “pin” represents pin where we connected analog signal, in this case it would be “A0”. The value from ADC can be taken into an integer as “int SENSORVALUE = analogRead(A0); ”, by this instruction the value after ADC gets stored in the integer “SENSORVALUE”.

The PWM of UNO can achieved at any of pins symbolized as “ ~ ” on the PCB board. There are six PWM channels in UNO. We are going to use PIN3 for our purpose.

Now let’s talk about the servo motor control, the Arduino Uno has a feature which enables us to control the servo position by just giving the degree value.  Say if we want the servo to be at 30, we can directly represent the value in the program. The SERVO header file takes care of all the duty ratio calculations internally. You can learn more about servo motor control with arduino here.

So ADC is approximately six times the SERVO POSITION. So by divided the ADC result by 6 we will get the approximate SERVO hand position. Hence we have a PWM signal whose duty ratio changes linearly with WEIGHT or FORCE. This being given to servo motor, we can control the servo motor by force sensor.

#include <Servo.h> //header for controller servo

servo.attach(3); //telling where signal pin of servo attached(must be a PWM pin)

How do I make the servo motor

How do I make the servo motor rotate at a specific weight say 15kg using a load cell of 20 kg.