The MPU6050 is an IC 3-axis accelerometer and a 3-axis gyroscope combined into one unit. It also houses a temperature sensor and a DCM to perform a complex task. The MPU6050 is commonly used in building Drone and other remote robots like a self-balancing robot. In this project we will build a Digital Protractor using MPU6050 and Arduino. Here a servo motor is used to display the angle on a protractor image. Servo motor shaft is attached with a needle which will rotate on protractor image to indicate the angle which is also displayed on a 16xLCD display. Before going into details let's learn about Gyroscope sensor.

What is an Accelerometer and Gyroscopic sensor?

An accelerometer is used to measure the acceleration. It actually senses both the static and dynamic acceleration. For example, mobile phones use accelerometer sensor to sense that the mobile is on landscape mode or portrait mode. We previously used Accelerometer with Arduino to build many projects like:

A gyroscope is used to measure angular velocity that uses earth’s gravity to determine the orientation of the object in motion. Angular velocity is the rate of change of angular position of a rotating body.

For example, todays mobiles use gyroscopic sensors to play mobile games according to the orientation of the mobile phone. Also, VR headset uses gyroscope sensor to have views in 360 orientation

So while accelerometer can measure linear acceleration, gyroscope can help find the rotational acceleration. When using both the sensors as separate modules it becomes difficult to find orientation, position and velocity. But by combining the two sensors it works as an Inertial Measurement Unit (IMU). So in MPU6050 module, accelerometer and gyroscope are present on a single PCB to find the orientation, position and velocity. 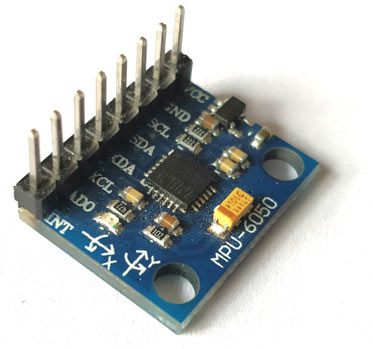 The MPU6050 is a Micro Electro-Mechanical Systems (MEMS) which consists of a 3-axis Accelerometer and 3-axis Gyroscope inside it. It also has temperature sensor.

This module also has a (DMP) Digital Motion Processor inside it which is powerful enough to perform complex calculation and thus free up the work for Microcontroller.

The module also has two auxiliary pins which can be used to interface external IIC modules like a magnetometer. Since the IIC address of the module is configurable, more than one MPU6050 sensor can be interfaced to a Microcontroller using the AD0 pin. 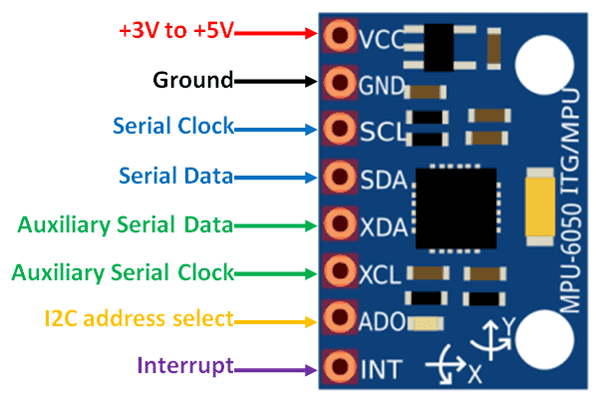 We previously used MPU6050 with Arduino to build Self Balancing Robot and Inclinometer.

Circuit diagram for this DIY Arduino Protractor is given below: 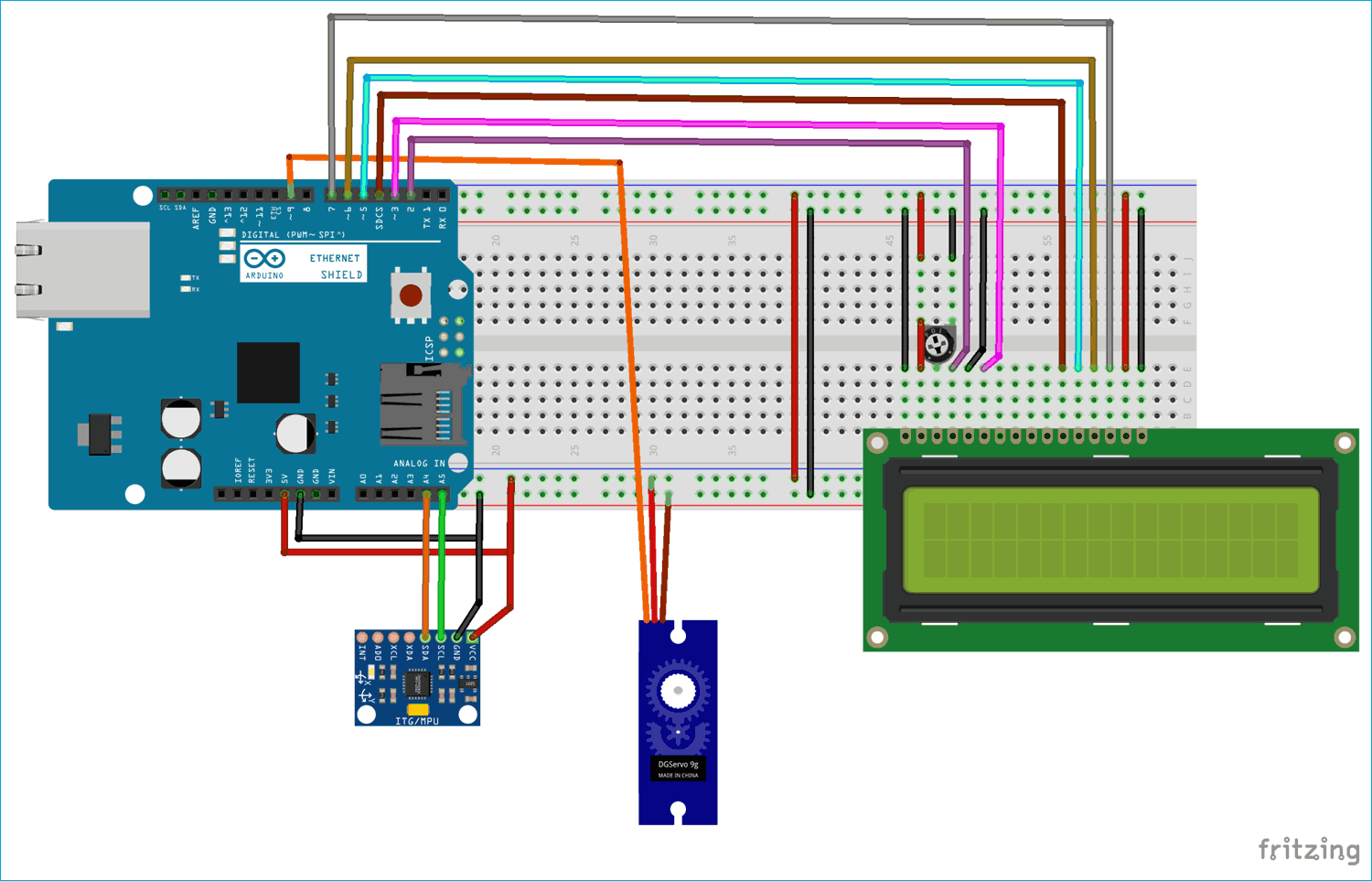 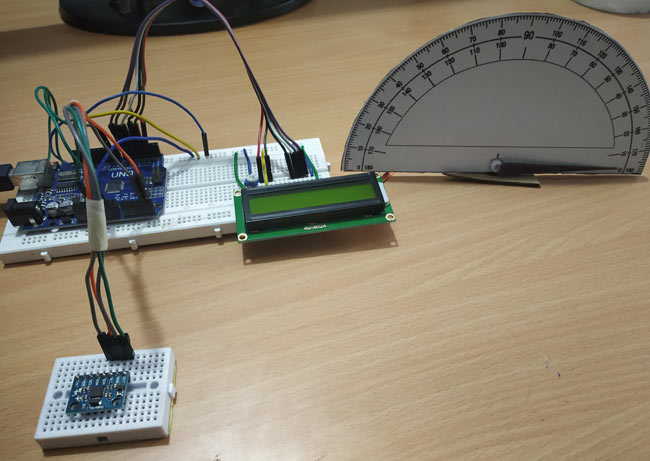 As usual the complete program with a Demonstration video is given at the end of this tutorial.

Here servo motor is connected with Arduino and its shaft is projected on protractor image indicating the angle of the inclined MPU6050. Programming for this tutorial is simple. Let’s see it in detail.

The MPU6050 uses I2C Communication and hence, it must be connected only to the I2C Pins of the Arduino. So, Wire.h library is used to establish communication between Arduino UNO and MPU6050. We previously interfaced MPU6050 with Arduino and displayed the x,y,z coordinate values on 16x2 LCD.

Next the I2C address of the MPU6050 is defined.

In void setup function first I2C communication is started and transmission has begun with MPU6050 with address of 0x68.

Here the PWM pin of Servo motor is connected with Arduino UNO pin 9.

Again, the I2C communication is begun with MPU6050.

Then start with register 0x3B (ACCEL_XOUT_H)

Now the process is restarted by set end transmission as false but the connection is active.

After that now request the data from the 14 registers.

Formula to calculate x value in degree (0 to 360) is given below. Here we convert only x because the servo motor rotation is based on x value movement.

Then write the angle value to rotate the servo on protractor image and Print those values on the 16x2 LCD display. 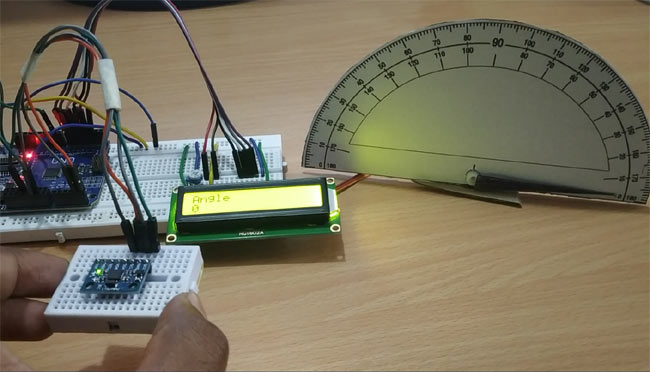 So this is how MPU6050 with Arduino can be used to measure the angle. Complete code and video for this project is given below.