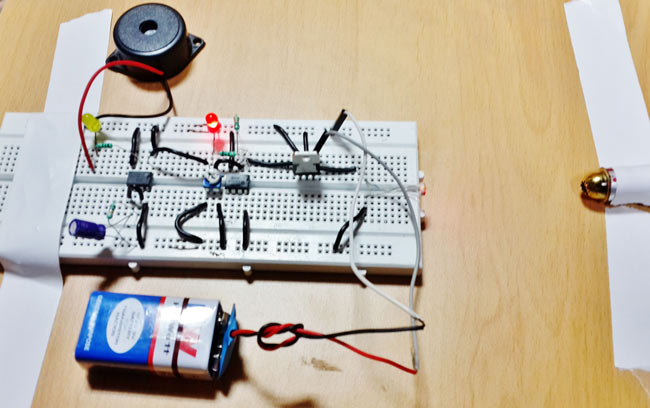 The sensor used here is an

The sensor used here is an LDR, if light falls on it, the resistance of it will decrease hence it can detect light

To what maximum distance could the laser and ldr be set apart?

What influenced the choice of your components.

need an information about the kit

Can I get this laser security alarm kit and where can I get it?

Why we can not use battary

Why we can not use battary without 7805

i tried making this project

i tried making this project but it doesn't work .. the voltage that goes to the buzzer terminals are both negative... how can i fix this sir?

How are you telling that the

How are you telling that the voltage is negative to the buzzer? Check your connection please

How to increase the time of

How to increase the time of buzzer for 1 min

Can you please add HD photo of breadboard circuit.

Can you sent me the pcb layout of this circuit, please....

Hi.Is it possible to replace the buzzer with a relay? Thanks

why when i constuct it into

why when i constuct it into the proteus and when i want to run it, my proteus suddenly shut off?

i contruct this circuit in

i contruct this circuit in proteus, but how to make the buzzer and D2 turn on? how do we interupt the LDR in proteus?