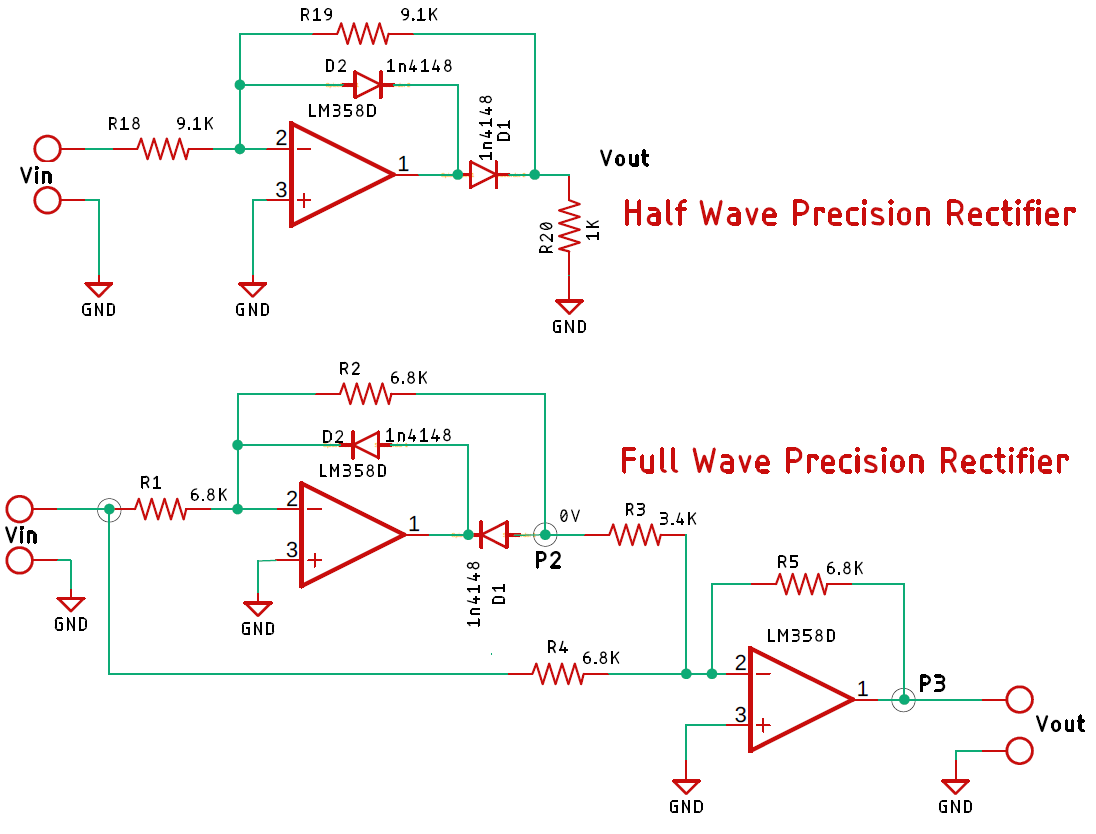 A rectifier is a circuit that converts alternating current (AC) to Direct current (DC). An alternating current always changes its direction over time, but the direct current flows continuously in one direction. In a typical rectifier circuit, we use diodes to rectify AC to DC. But this rectification method can only be used if the input voltage to the circuit is greater than the forward voltage of the diode which is typically 0.7V. We previously explained diode-based half-wave rectifier and full-wave rectifier circuit.

To overcome this issue, the Precision Rectifier Circuit was introduced. The precision rectifier is another rectifier that converts AC to DC, but in a precision rectifier we use an op-amp to compensate for the voltage drop across the diode, that is why we are not losing the 0.6V or 0.7V voltage drop across the diode, also the circuit can be constructed to have some gain at the output of the amplifier as well.

So, in this tutorial, I am going to show you how you can build, test, apply, and debug a precision rectifier circuit using op-amp. Alongside that, I will be discussing some pros and cons of this circuit as well. So, without further ado, let's get started.

What is a Precision Rectifier Circuit?

Before we know about the Precision Rectifier Circuit, let's clarify the basics of the rectifier circuit.

The above figure shows a practical rectifier circuit with its transfer characteristics. In a practical rectifier circuit, the output waveform will be 0.7 volts less than the applied input voltage, and the transfer characteristic will look like the figure shown in the diagram. At this point, the diode will only conduct if the applied input signal is slightly greater than the forward voltage of the diode.

Now the basics out of the way, let's turn our focus back to the precision rectifier circuit.

The above circuit shows a basic, half-wave precision rectifier circuit with an LM358 Op-Amp and a 1n4148 diode. To learn how an op-amp works, you can follow this op-amp circuit.

The above circuit also shows you the input and output waveform of the precision rectifier circuit, which is exactly equal to the input. That's because we are taking the feedback from the output of the diode and the op-amp compensates for any voltage drop across the diode. So, the diode behaves like an ideal diode.

Now in the above image, you can clearly see what happens when a positive and a negative half cycle of the input signal is applied in the input terminal of the Op-Amp. The circuit also shows the transfer characteristics of the circuit.

But in a practical circuit, you will not get the output as shown in the above figure, let me tell you why?

The above image shows you when the diode is off, the negative half cycle is of the signal flows through the resistor on to the output, and that is why we are getting the full-wave rectification like the output, but this is not the actual case.

Let's see what happens when we connect a 1K load. 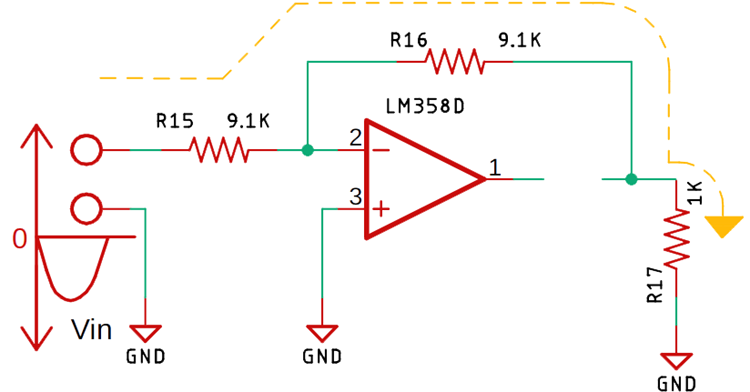 The output looks like this because we have practically formed a voltage divider circuit with two 9.1K and a 1K resistor, that is why the input positive half of the signal just got attenuated.

Again, this above image shows you what happens when I change the load resistor value to 220R from 1K.

This is not the least bit of a problem that this circuit has. 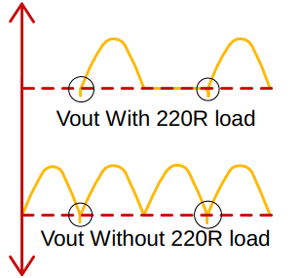 The above image shows you an undershoot condition where the output of the circuit goes below zero volts and rises after a certain spike.

The above image shows you an undershoot condition for both of those above-mentioned circuits, with load and without load. That is because, whenever the input signal goes below zero, the op-amp goes into the negative saturation region and the result is the shown image. 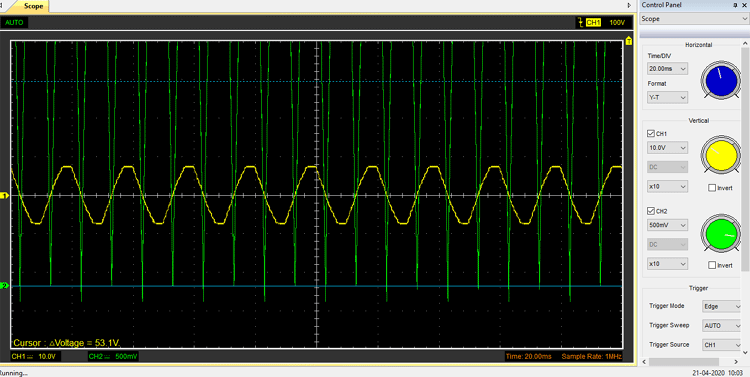 Another reason we can say that, whenever the input voltage swings from positive to negative, it will take some time before the op-amps feedback comes into play and stabilizes the output, and this is why we are getting the spikes below zero volts on the output.

This is happening because I am using a jelly bean LM358 op-amp with a low slew rate. You can get away with this problem, just by putting an op-amp with a higher slew rate. But keep in mind that this will also happen in the higher frequency range of the circuit. 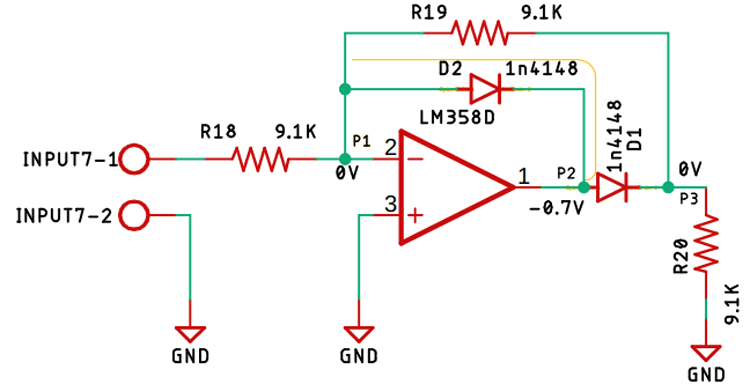 The above figure shows a modified precision rectifier circuit through which we can reduce all the above-mentioned flaws and drawbacks. Let's study the circuit and figure out how it works.

Now in the above circuit, you can see that the diode D2 will conduct if the positive half of the sinusoidal signal is applied as an input. Now the above-shown path (with the yellow line) is completed and the Op-amp is acting as an inverting amplifier, if we look at point P1, the voltage is 0V as a virtual ground is formed at that point, so current cannot flow through the resistor R19, and in the output point P2, the voltage is negative 0.7V as the op-amp is compensating for the diode drop, so there is no way that current can go to point P3. So, that is how we have achieved a 0V output whenever a positive half cycle of the signal is applied to the input of the Op-amp.

Now let us assume that we have applied the negative half of the sinusoidal AC signal to the input of the op-amp. That means the applied input signal is less than 0V. 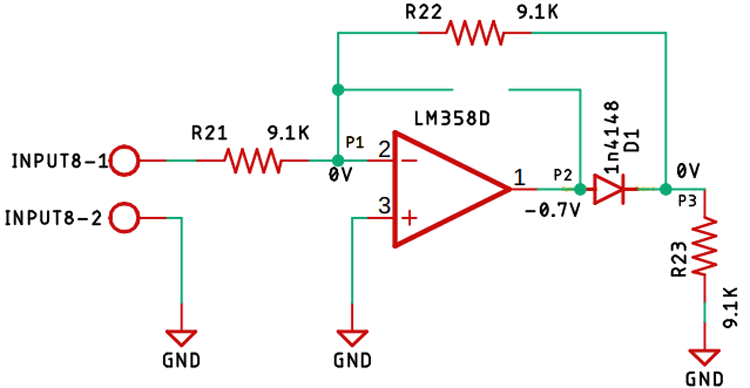 At this point, the Diode D2 is in the reverse-biased condition that means it's an open circuit. The image above exactly tells you that.

As the Diode D2 is in the reverse-biased condition, the current will flow through the resistor R22 forming a virtual ground at point P1. Now when the negative half of the input signal is applied, we will get a positive signal in the output as its an inverting amplifier. And the diode will conduct and we will get the compensated output at point P3.

Now let us observe the output of the circuit in the oscilloscope.

The practical output of the circuit without any load attached is shown in the above image.

Because of that reason, a full-wave rectifier circuit was introduced, to achieve a full-wave precision rectifier, I just need to make a summing amplifier, and that's basically it.

The input from the point P1 is also fed to the summing amplifier with the help of the resistor R4, the resistors R4 and R5 are responsible for setting the gain of the op-amp to 1X.

The same thing happens when the negative peak of the input signal is applied. 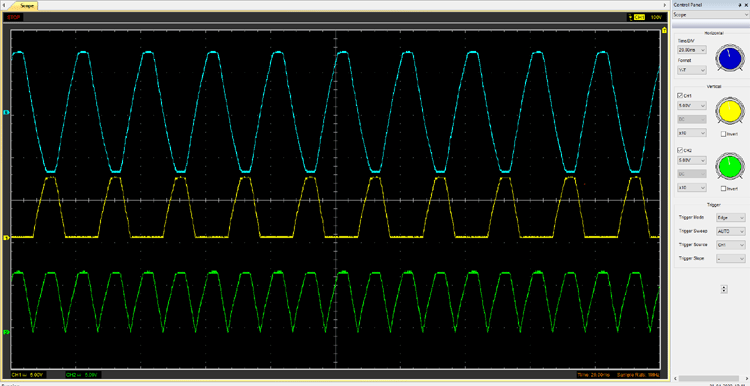 Circuit diagram for half-wave and full-wave precision rectifier using op-amp is given below: 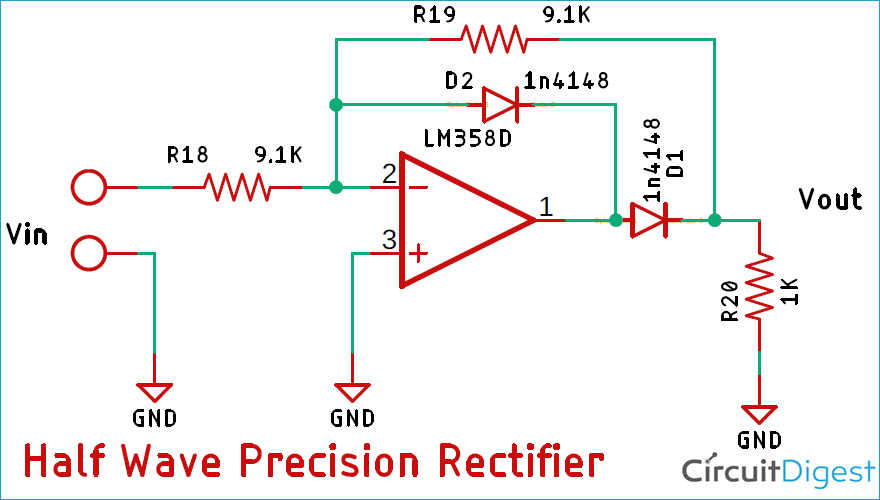 For this demonstration, the circuit is constructed in a solderless breadboard, with the help of the schematic; To reduce parasitic inductance and capacitance, I have connected the components as close as possible.

The circuit can be further modified in order to improve its performance like we can add an additional filter in order to reject high-frequency noises.

This circuit is made just for demonstration purposes only. If you are thinking about using this circuit in a practical application, you have to use a chopper type op-amp and high precision 0.1 ohms resistor to achieve absolute stability.

Well explained, but errors in text

Well explained Debashis, but look at the part where you mention

There are no such resistors! For someone familiar with how op-amps work, this is not difficult to figure out, but your description needs to be consistent with component names used.

Good job, but you need to proof read your articles.

Yes you are right. it's a mistake from my side i will fix this as soon as possible. Thanks.

Hi.....can i use the above circuit to convert 0-24VAC to 0-24VDC from Current Transformer? Thank you.

I don't know why, but this…

I don't know why, but this circuit doesn't work for me. I am trying to convert 600mv AC signal to DC without any voltage drop. But when I try this with full wave precision rectifier, there is a huge drop of voltage in the output. I just only can get an output of 32mv DC for 400mv AC. Please help me in getting rid of this. For the past 2 week i,m stuck in this circuit, i need it for my project.