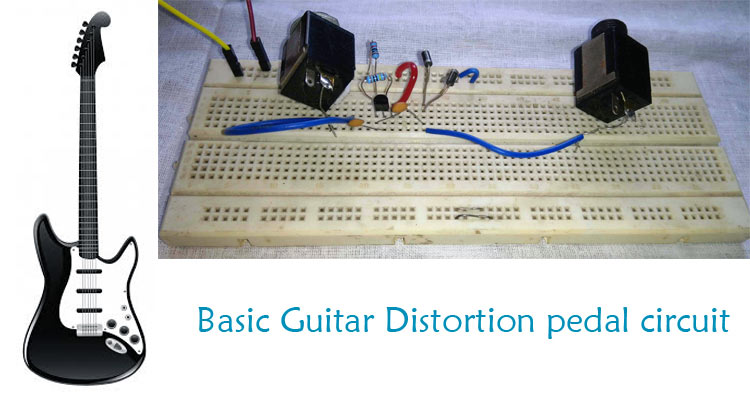 Who does not like the rumbling tone of a distorted electric guitar? It is a key part of many important genres of music, especially in blues and rock music genres and is also frequently used in hard rock, metal or the punk music genre. In this project, we will build a basic distortion pedal for guitars using a simple circuit. You can also check out the Arduino Guitar Tuner Circuit if you are looking for more guitar-related projects.

The distortion pedal produces a distorted sound on the musical notes. Generally, A Distortion pedal circuit is used in between the guitar audio source and the Power Amplifier. A simple block diagram of a guitar with a distortion circuit looks like this below.

Distortion pedals are made using a minimum of the two most important things, namely the preamplifier section and the diode clipping circuit. The Audio preamplifier section adds up the gain to the input signal and the diode clipping section clips or chops out the positive and negative peak of the audio signal. Often, distortion pedals are also called as overdrive or fuzz pedals.

In this article, we are going to build a transistor-based Distortion circuit. The components that are required for constructing the basic distortion pedal circuit are -

In the below image, a basic distortion pedal schematic using a transistor is shown. The transistor acts like a basic preamplifier. The 100K resistor is used as a collector resistor and the two capacitors are used for the audio input and audio output related purposes. The capacitors will block any DC and only pass the AC signal. The capacitor's value can be selected from .1 microfarad to 10 microfarads. 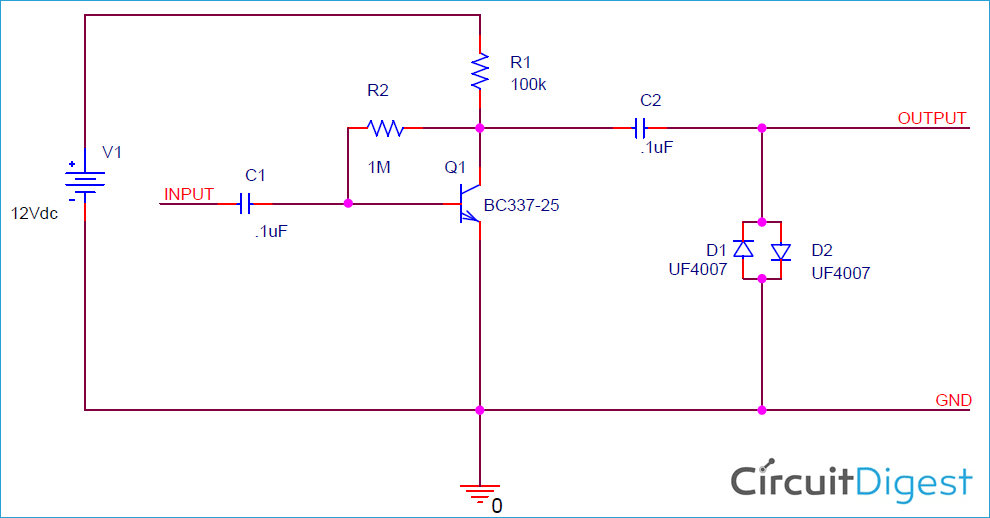 The selection of the transistor is essential for this project. In the above circuit, we used BC337-25 transistors. This transistor provides pretty good gain to the input signal. One can use other transistors as well.

Two diodes D1 and D2 create a diode clipping circuit. This is the place where the distorted sound is created. Let's assume that the input signal is an AC sinusoidal signal that looks like the below image.

How much distortion is needed depends on the diodes configurations. A different forward voltage or even different specifications of diodes in D1 and D2 produces different kinds of distorted sound.

Possible combinations include 1N4148 in D1 and Green LED in D2, or Orange and Green LED in D1 and D2, or Germanium diodes configurations also work. Different manufacturers of distortion pedals use different combinations in a single package and provide a selectable switch for the user. The user can choose which one to use as per the tonality. One can experiment with other diodes configuration and creates interesting distorted sound output.

The circuit that we explained above is constructed on a breadboard and tested with a real guitar. The breadboard set-up once the circuit was completed looks like this below.

To test the circuit, I have used two patch cables, a Power Amplifier, and one guitar. The patch cables are connected to the two connectors (black colour) to get the audio input from the guitar and pass it on to the amplifier. However, the distortion pedal is generally used with electric guitar but since it is unavailable during the testing phase, an acoustic guitar is used here for our testing purposes.

The Power amplifier is a 5 Watt home-based amplifier system that I use for guitar practices. You use any amplifier of your choice, or build your own, we have previously built a lot of Audio Amplifier circuits ranging from small 10W amplifiers to heavy 100W Power amplifier.

A detailed testing video can be found at the bottom of this page. Additional improvements such as volume or gain control can also be added with the above circuit. I hope you enjoyed the tutorial and was able to build your own Guitar Distortion circuit if you have any questions please use our forums or drop them in the comment section below.