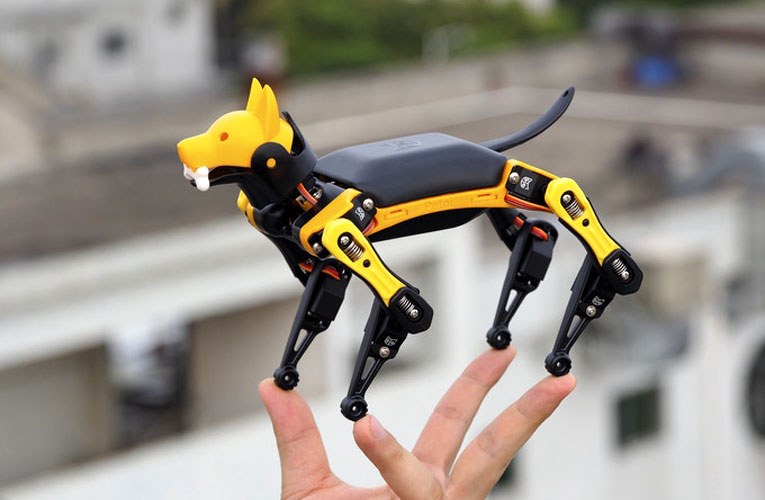 Petoi Bittle is a palm-sized cute programmable, budget-friendly quadruped robot dog with a plastic frame. The tiny robot is easily customizable and comprises of five major components i.e. the body frame, actuator, electronics, battery, and the software to coordinate all the hardware to perform different tasks.

Bittle is an open platform to blend multiple gadgets into one organic system. It moves on its 4 legs and has a frame that is compatible with most 9g servos. It is driven by NyBoard V1, which is a customized Arduino board with rich peripherals. The board can drive at least 12 PWM servos and an IMU (Inertial Measurement Unit) is used for balancing. The robot stores muscle memory and detects body status (orientation and acceleration) that helps it to balance well. Besides, an infrared remote is provided to trigger the basic movements. The board also listens to string commands like walk, sit from the serial port, or more detailed instructions for individual joints to follow. 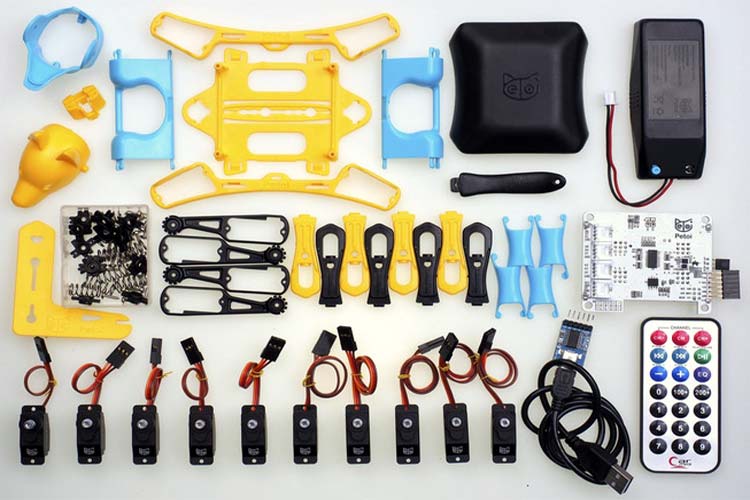 The robot body consists of interlocking, puzzle piece-like injection-molded plastic components, with very less number of screws. It is 20cm x 11cm x 11cm in dimension and weighs less than 280g. However, it can carry up to 450g cargo under its belly. With proper programming and calibration, the robot can run faster than two body lengths per second. Also, it can remember tens of instinctive motion patterns and can perform more fancy tricks with real-time instructions. It is 8.4V compatible, runs at a high speed, and has a controllable range of 270 degrees. The NyBoard V1 it comes endowed with has an Atmega328P with 16MHz CPU, 2K SRAM, and 32K flash. Besides, there is an 8K I2C EEPROM, an IMU, a servo driver for 12 PWM servos, an infrared receiver, a buzzer, and a 2x5 socked to mount on a Raspberry Pi.

There are four Seeed Grove sockets on NyBoard V1 for extensible modules. To make installation easier, the robot’s head is designed as a clip to bite on the modules. Besides, the ‘sensor pack’ perk, including an intelligent camera module, a gesture sensor, a PIR motion sensor, and some other useful sensors will be compiled too.

It comes with an intelligent camera module that integrates multiple vision recognition algorithms running on its ESP32 dual-core processor. It can return recognized human body, objects, and symbols through serial/I2C/WiFi at a rate of 25fps or 50fps. Along with this, a deck of symbol cards can also be included.

The robot has a Bluetooth dongle for wireless connectivity. The Bluetooth dongle is compatible with Windows, macOS, and Android. It can also work on iOS with some auxiliary software to be used for uploading Arduino sketch or communicating with the NyBoard. The WiFi module can host a simple WebUI and communicate with the NyBoard. 2x5 socket on NyBoard V1 for mounting Raspberry Pi is also provided to power the Pi and communicate with it through the serial or I2C network. The Pi gives Bittle the ability to analyze more sensory data, get connected to the Internet, and make decisions by itself.

Due to Bittle's small size, it best fits Pi Zero and Pi 3A+. For larger Pi models, you will need to tilt the Pi and 3D print some supporting structures. It usually survives regular collisions. However, in extreme cases, it gets disintegrate at the designated weak link in the chain, which is easy and cheap to reinstall or replace. 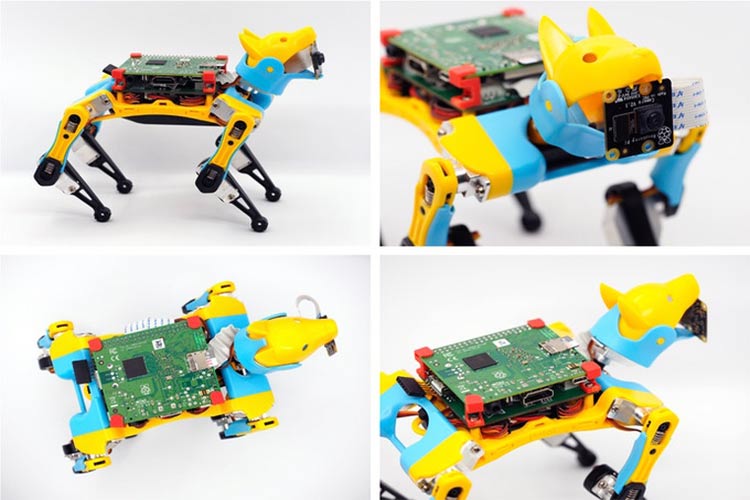 Users can easily program Bittle at different levels in various coding environments, such as C in Arduino IDE and Python in the terminal. A screw hole inside Bittle's head allows easy fixation of additional modules. For actuating the robot, nine P1S servos are used, eight of which are for walking joints, and one is for head panning. Also, there is one spare servo for replacement, as brushed motors are consumable after a certain period of wearing.

Talking about the battery, the robot has a Li-ion battery pack with a built-in charging and protection circuit. It can slide into the track underneath Bittle and tune its center of mass. The battery can power Bittle for at least one hour of continuous walking. It also has an RGB LED to indicate the battery's status. With the slide-in installation mechanism and an anti-reverse plug, it's not too hard to switch batteries.