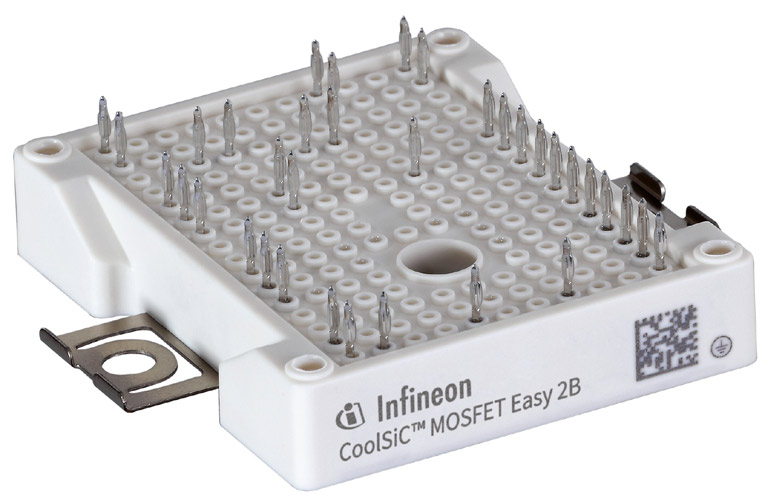 Infineon Technologies has launched hybrid SiC and IGBT power module EasyPACK 2B in the 1200 V family utilizes the ANPC topology. The ANPC topology used in the power module supports an even loss distribution between semiconductor devices compared with traditional 3-level neutral-point-clamped topologies. The power module features increased power density and a switching frequency of up to 48 kHz by optimizing for sweet spot losses of the CoolSiC MOSFET and the TRENCHSTOP IGBT4 chipsets respectively.  This will fulfil the requirements in new generation 1500 V photovoltaic, battery charging and energy storage applications.

The new ANPC topology also supports a system efficiency of more than 99 percent. Implementing the hybrid Easy 2B power module in e.g. the DC/AC stage of a 1500 V solar string inverter allows for coils to be smaller than with devices with a lower switching frequency. This leads it to weigh significantly less than a corresponding inverter with purely silicon components. Also, the losses with silicon carbide are smaller than with silicon. These features leads to smaller inverter housings and costs savings at system level. Also in these kind of designs, the 3-level design reduces the complexity of the inverter design compared to existing 5-level topologies.

The Easy 2B standard package for power modules is characterized by an industry-leading low stray inductance and the integrated body diode of the CoolSiC MOSFET chip ensures a low-loss freewheeling function without the need for another SiC diode chip. Also, the NTC temperature sensor facilitates the monitoring of the device and PressFIT technology reduces assembly time for mounting the device. Overall, the power modules reduce the system complexity, simplify ease of design and implementation and are highly reliable with longer lifetime operation.

The hybrid EasyPACK 2B (F3L11MR12W2M1_B65) can be ordered now and more information can be found from Infineon Website.