How to establish UART communication between ATmega8 and Arduino Uno? 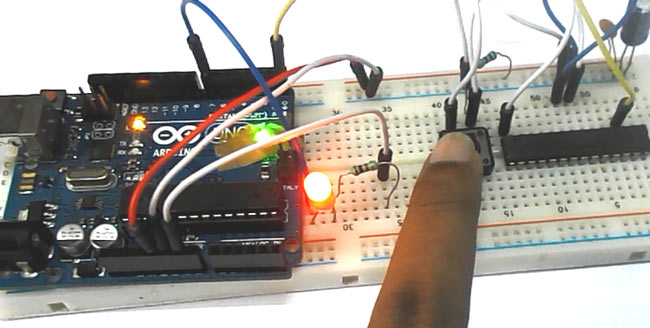 In embedded systems we must have basic knowledge about system communications, so for this we are doing this project. In this project we will discuss basic communication system and we will send some data from transmitter to receiver in serial.

In this project ATMEGA8 acts as a TRANSMITTER and ARDUINO UNO acts as a RECECIVER. In serial communication we will send data BIT BY BIT, until a BYTE of data is transferred completely. The data can be of 10bit size but we will keep to 8BITS for now.

Before we discuss the circuit diagram and programming for transmitter and receiver, we need to understand about the serial communication. The ATMEGA here sends data to the UNO in serial as discussed earlier.

The data communication established is programmed to have:

For establishing UART between Arduino Uno and ATMEGA8 we need to program the setting accurately. For this we need to keep the above mentioned parameters same at both ends. In this one acts as TRANSMITTER and other acts as RECEIVER. We will discuss each side settings below.

Now for the RS232 interface, the following features must be satisfied for the TRANSMITTER side (ATMEGA8):

1. The TXD pin (data receiving feature) of first controller must be enabled for TRANSMITTER.

2. Since the communication is serial we need to know whenever the data bye is received, so that we can stop the program until complete byte is received. This is done by enabling a data receive complete interrupt.

3. DATA is transmitted and received to controller in 8bit mode. So two characters will be sent to the controller at a time.

4. There are no parity bits, one stop bit in the data sent by the module.

The above features are set in the controller registers; we are going to discuss them briefly:

DARK GREY (UDRE): This bit not set during startup but it is used during working to check whether transmitter is ready to transmit or not. See the program on TRASMITTER SIDE for more details.

VOILET (TXEN): This bit is set for enabling transmitter pin on TRASMITTER SIDE.

YELLOW (UCSZ0, UCSZ1, and UCSZ2): These three bits are used for selecting the number of data bits we are receiving or sending in a single go.

Both the SYTEMS do not share any clock. Since both of them use internal clock of their own. So we need to set UMSEL to 0 in both controllers.

GREEN (UPM1, UPM0): These two bits are adjusted based on bit parity we are using in communication.

The data ATMEGA here is programmed to send data with no parity, as the data transmission length is small, we can clearly expect no data loss or error. So we are not setting any parity here. So we set both UPM1, UPM0 to zero or they are left, because all bits are 0 by default.

BLUE (USBS): This bit is used for choosing the number of stop bits we are using during communication.

The communication established her is of asynchronous type, so for getting more accurate data transmission and reception, we need to use two stop bits, Hence we set USBS to ‘1’  in TRANSMITTER side..

The baud rate is set in controller by choosing the appropriate UBRRH:

So by cross reference UBRR value is seen as ‘6’, and so the baud rate is set.

With this we have established settings on TRANSMITTER SIDE; we will talk about RECEIVING SIDE now.

The serial communication enabling in UNO can be done by using a single command.

Now all left if to receive data, one a data is received by the UNO, it will be available for taking. This data is picked up by command “receiveddata = Serial.read();”. By this command serial data is taken to ‘receiveddata’ named integer.

As shown in circuit a button in connected on transmitter side, when this button in pressed an eight bit data is sent by TRANSMITTER (ATMEGA8) and this data is received by RECEIVER (ARDUINO UNO). On receiving this data successfully it toggles the LED connected to it ON and OFF, to show successful data transfer between two controller.

By this UART communication between ATMEGA8 controller and ARDUINO UNO is successfully established.

PROGRAM ON TRANSMITTER SIDE:

//Put the remaining part of the baud number here

//Enable the receiver and transmitter

if (bit_is_clear(PINC,0))//once button is pressed

PROGRAM ON RECEIVER SIDE:

pinMode(0,INPUT);//RXD pin is set for INPUT

pinMode(7,OUTPUT);//PIN1,PIN7 are set for output

if (Serial.available() > 0) //if data received is available

if (receiveddata == 0)//compare the data received

Hi, i was wondering if it's possible to do the opposite,
I have an arduino Uno where i wish to send Analog read to an atmega16 to display it on the screen how can i prepare the atmega to receive the data if more than one digit. and the uart settings.

Ur Tx code is either incomplete or incorrect.
Wat ur code does and wat ur video shows are completely different.

Reverse of this Communication with Atmega32

I need some help in Sending data from an ARDUINO UNO and receiving on ATMEGA32
Could you please help me with that.

I have the same problem as Rashmitha, I like to be able to send from Arduino and receive by Atmega32 and be able to toggle the duty . ie. some time being transmitter and some other time as receiver.

please help in this regard.

Sending from ArduinoUno to atmega1284

I would like to send a char from an arduino Uno to a Atmega1284 using USART. Can you please help?