Wireless communication is the future of technology! Communication established between two modules opens a large scope of applications. Wireless Transceivers modules come in very handy and are useful in such cases. RF transmitter and receiver, such as those used in our project, play a major role when it comes to communicating over long distances with a higher transmission data rate. XY - WA 2.4Ghz transceiver module is another radio frequency module that uses a license-free open ISM band and can transmit power up to 100mW with a high transmission rate of up to 1 Mbps at a transmission range up to 250m. RF modules are being widely used for wireless communication modes, you can also check out our other projects using different RF modules.

We'll begin by discussing the module’s pin description, working, and its connections to a microcontroller. The module's working is also briefly described in this section.

The image below describes the pin configuration of the XY-WA module used in our project. It is a Type A module and has 8 pins. It can be used to mount over custom circuit boards to reduce the size and make a compact device. 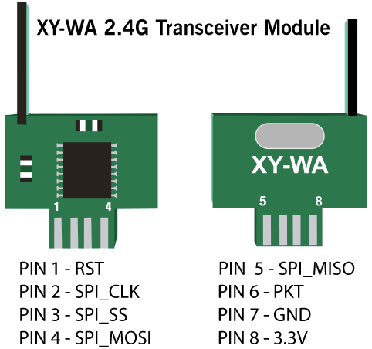 Wiring of the Radio Frequency Module with Arduino or MCU 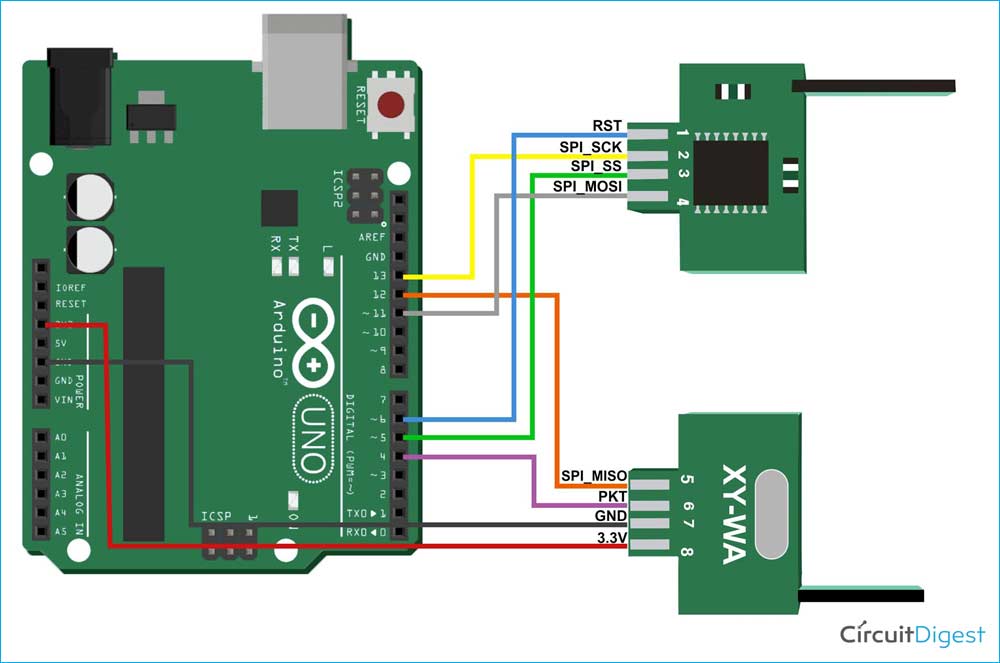 Pin connections are defined below:

Note: The XY-WA module comes in two variants or types i.e. Type A, which is the PCB welding type, and the other is Type B, which is the pin type. Here, we have used the Type A module. You can refer to the same pin connections by making sure the pin numbers in the right order.

To understand more about the pin configuration of the XY-WA module, you can follow the pin description table below.

1. Some specifications about the module:

The table below shows some of the characteristics and the values of the following characteristics. Follow along, these may help to understand the module better.

The table below showcases the following pin number of the module XY-WA along with the description. This may help while making the connections with the Microcontroller.

HOW DOES XY-WA Module Work? 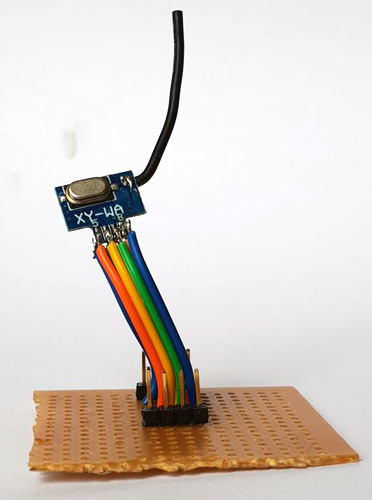 Here, I have soldered some jumper wires to the Zero board and connected male jumpers to it to make it convenient to connect it to the microcontroller.

Every channel on which two modules communicate occupies a bandwidth that is less than 1Mhz. Considering the frequency range of 2.4Ghz to 2.525Ghz, we get 125 possible channels.

You can use this formula to determine the frequency of the selected channel:

As there are 125 possible channels, you can use a value between 0 to 125 and put it in the channel selected value, and determine the frequency of the channel which will be used.

Since we will be dealing with the Radio Frequencies, there are certain pros and cons. Let's have a look at that:

Ways to increase the range of the XY - WA RF module:

Problems that could be faced while dealing with RF module:

When it comes to radio frequencies, RF signals are very susceptible to noise from different sources, one of which is its power input. DC batteries do get away with those, but if it is an AC-DC converter, using it probably will generate noise and affect the RF signals in terms of additive noise and low range.

Tips:  1. You can place a small capacitor across the power input of the module in order to physically isolate the XY-WA module.

2. You can also wind the MOSI and MISO wires around the ground wire of the module to reduce the noise.

Serial Peripheral Interface is primarily used for short-distance communication. It is a synchronous* serial data protocol that is used by multiple microcontrollers, microprocessors to communicate with various peripherals at higher speeds and over short distances. It is a full-duplex and a 4-wire communication.

SPI communication contains a single master and can communicate with multiple slave nodes using SS pins(SS0, SS1, SS2,.....). The figure below explains how one master controls multiple slaves. Whichever slave has to be selected, a logic 0 is sent via the SS pin and that slave communicates with the master. 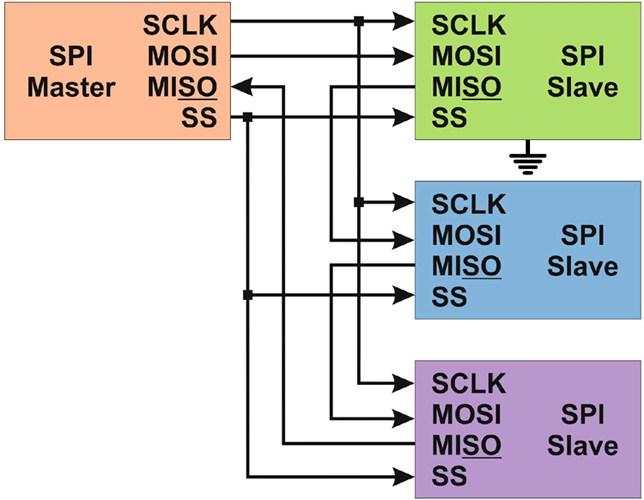 SPI has 4 modes of transmission, mode 0, mode1, mode 2, mode 3 are responsible for pushing the data in or out into the rising edge and falling edge of the clock signal which is called the Clock phase. These modes also tell when the clock is idle when high or low(called clock polarity). The table below shows how the modes combine polarity and phases together.

The major four common pins/ports in all SPI devices are defined below:

In order to begin with the project, we would require some libraries.

The following code can be used for both the modules since they are transceivers, hence anyone can either act as a transmitter and another as a receiver and vice versa.

Below, I have hooked both the Radio Frequency modules to the Arduino and then connected them to the laptop. The code was then uploaded to both the modules and the serial monitor was observed. As per the print commands described in the code, we observe that the packets are now being sent and received by the RF modules.

I hope you all enjoyed this project, and if you have any questions related to the project, please feel free to upload them to our Forum and we will get back to you as soon as possible. Thanks!

For further clarification, you can also follow the video below: