How Does a Rotary Encoder Module Work and how to Interface it with Arduino? 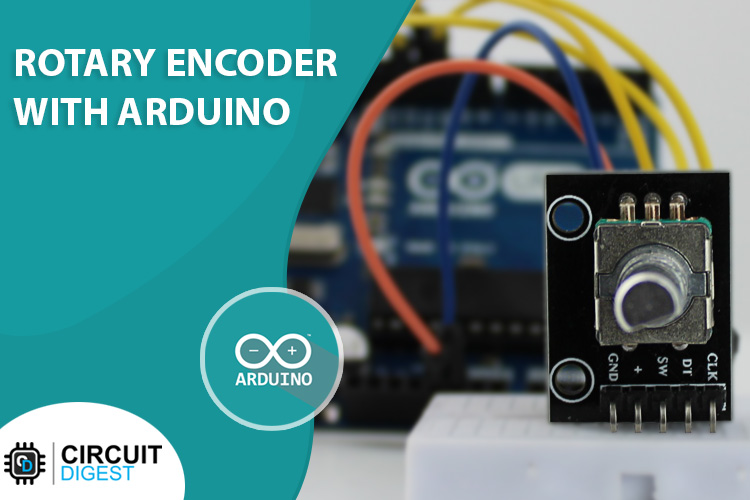 A rotary encoder is a type of electromechanical position sensor that can be used to identify the angular position of the rotary shaft. This type of sensor or module generates an electrical signal based on the movement and direction of the rotary shaft. This encoder is constructed with mechanical parts thus sensors are very robust, and can be used in many applications like robots, computer mice, CNC machines, and printers. There are two types of rotary encoder: one is an absolute encoder and another is an incremental encoder. For this article, we are going to use the incremental one and will let you know all the details about it. So without further ado let's get right into it.

VCC is the power supply pin of the Rotary Encoder Module that can be connected to 5V or 3.3V of the supply.

DT This pin is the same as the CLK output, but it lags the CLK pin by 90 degrees.

CLK is the main pin of the encoder module. Each time the knob is rotated the clock output goes from High to Low.

This device features an auto and manual mode function; users can enable auto speed control mode by inputting the desired temperature range(Min and Max Value) and clicking on the Enable Auto Mode button. If the slider is moved while the auto mode is enabled, the device automatically reverts back to manual speed control mode.

How Does a Rotary Encoder Module Work?

If we tear down the rotary encoder, we will see that there is a disk with lots of holes cut into it. The encoder plate is connected to common ground and either two contacts are shown below.

When the shaft of the encoder is turned, the Output A and Output B terminals come in contact with the common plate in a particular order that depends on the direction of rotation. If the encoder wheel is rotating in a clockwise direction, output A will get connected first and after that, output B will get connected to the common plate. If the encoder is rotating in the counter counter-clockwise direction the opposite will happen, but at the end of the day, the signal generated by output A and output B will always be 90* out of phase with each other.

This is a cheap and easy-to-use module that can be used in many different applications. This sensor, depending on the direction of the rotation, generates a digital signal on its DATA and clock pin. If the data pin is leading the CLK pin by 90 degrees that means the encoder is rotating in the clockwise direction and the same is true for the opposite direction.

If you take a close look at the Rotary Encoder Module there is not much on the PCB itself, on the topside, we have the rotary encodes and header pins for connection and on the bottom side we only have pullup resistors. And that makes the whole of our rotary encoder module. As the rotary encoder is a mechanical device this can work with both 3.3V and 5V operating voltage.

Q. Where is the rotary encoder used?

Rotary encoders are used to control the speed of the conveyor belt as well as the direction of the movement. They are required in warehouse distribution systems, baggage handling systems, and case-packing systems.

Q. What are the three types of encoders?

An encoder detects the rotation of objects as a physical change amount by the sensor element, and finally transmits rotation/angle information to the outside as an electrical signal. An encoder is classified into four types: mechanical, optical, magnetic, and electromagnetic induction.

Q. What is the output of Rotary?

A rotary encoder, also called a shaft encoder, is an electro-mechanical device that converts the angular position or motion of a shaft or axle to an analog or digital output signals. There are two main types of rotary encoder: absolute and incremental.

Q. Is the rotary encoder better than the potentiometer?

The key advantage to using a rotary encoder over a potentiometer is that it can turn in the same direction indefinitely. In contrast, a potentiometer will typically turn one revolution, with the best resolution ones turning a maximum of ten times.

Q. What is an encoder jitter?

Encoder signal jitter is an inconsistency in encoder pulse shape in relation to another channel, often appearing as a backward and forward movement in the pulse. In the case of true signal jitter, the effect should show up on just one channel versus on all channels.

The module is made with very generic and readily available components, and all you need is three resistors and the encoder itself to build it yourself. The Schematic Diagram of the Rotary Encoder Module is shown below. 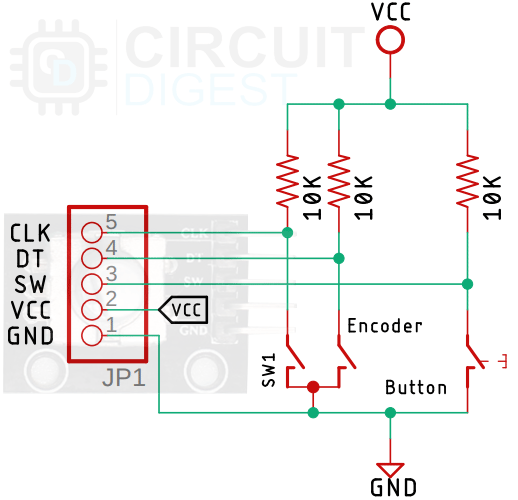 As you can see in the above image, there is not much in the rotary encoder module, all you need is three 10K pull-up resistors to build the module yourself. If you are building a PCB from the module this schematic can come in handy. 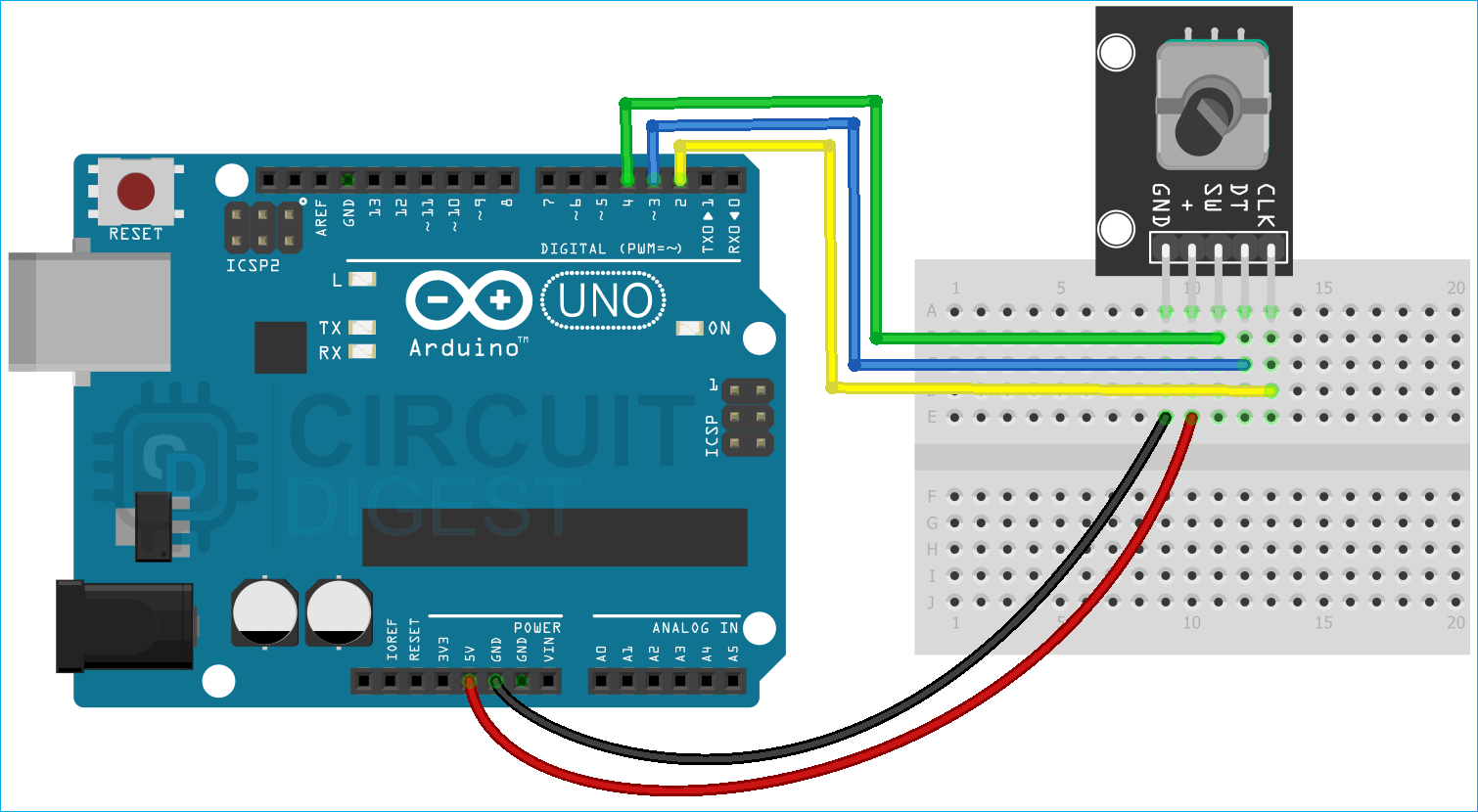 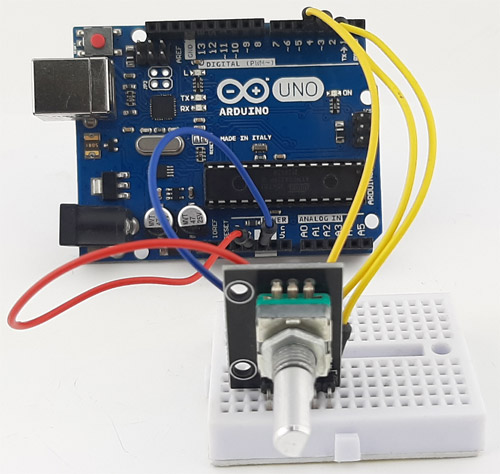 We start our code by including all the required libraries and we also define the Arduino pins for the clock, data, and button pins.

Next, we have defined all the required variables for holding the button state and counter state for the rotary encoder.

Next, we have our setup function. In the setup function, we set the three pins that we have defined earlier as input and we also initialize the serial monitor window for debugging.

Next, we read the current state of the CLK pin of the encoder and store it in the initState variable. This is important and without this step, the encoder counter will not work.

Finally, in the setup function, we have declared the interrupt and we configured it as CHANGE so that we could catch any interrupts that are from the encoder.

Next, we have our button_press() function, this function will be automatically called when an interrupt has occurred. Inside this function, we read the SW pin and check if the pin is low or not. If it's low then we wait for a certain amount of time to check if the button is actually pressed or if it's random noise. This way we can reduce the debouncing error from the button. If the button is pressed, we print Button pressed! Message on the serial monitor window.

This marks the end of the code portion of our code section and we can move on to the next section for this basic interfacing project with Arduino.

Rotary Encoder Module not Working? Here is what you should do! 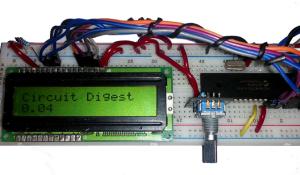 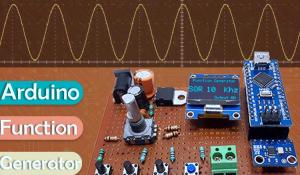 Build your own Function Generator with Arduino 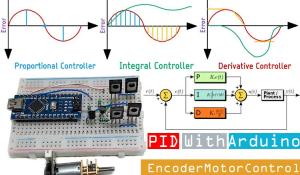 // Read the initial state of CLK

//If we detect LOW signal, button is pressed

// Read the current state of CLK

// If last and current state of CLK are different, then we can be sure that the pulse occurred

// Encoder is rotating counterclockwise so we decrement the counter

// Encoder is rotating clockwise so we increment the counter

// print the value in the serial monitor window