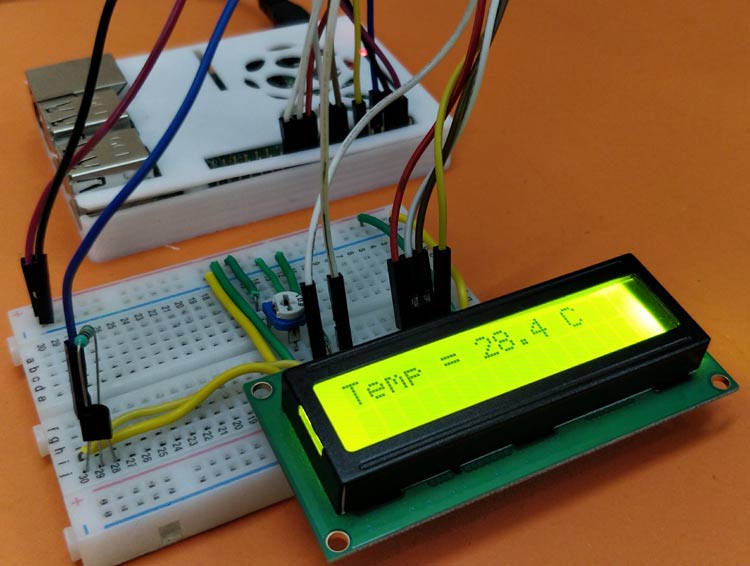 Raspberry Pi is known for its computational power and its vast application in the field of IoT, Home Automation etc. However for any electronic system to interact with the real world and get information about it, the system has to use sensors. There are many types of sensors used for this process and the required sensor is selected based on the parameter to be measured and its application. In this tutorial we learn to interface a temperature sensor DS18B20 with the Raspberry Pi.­

The DS18B20 is widely used temperature sensor, mainly at places where harsh operating environments are involved like chemical industries, mine plants etc. This article will tell about the sensor and how it outstands other temperature sensor and finally interface it with Raspberry Pi and view the temperature value on the 16x2 LCD. 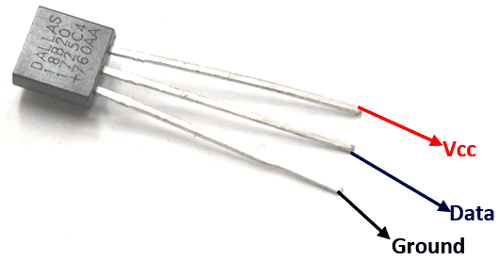 This sensor is also available as a waterproof version in which the sensor is covered by a cylindrical metal tube. In this tutorial we will be using the normal transistor type sensor that is shown above. The DS18B20 is a 1-wire programmable temperature sensor meaning it requires only the data pin to send the information to the microcontroller or microprocessor boards like the Raspberry Pi. Each sensor has a unique address of 64-bit for it so it is also possible to have multiple sensors connected to the same MCU/MPU since each sensor can be addressed individually on the same data bus. The specification of the sensor is show below.

Now that we know enough of the sensor, let us stat interfacing it with Raspberry Pi.

It is assumed that your Raspberry Pi is already flashed with an operating system and is able to connect to the internet. If not, follow the Getting started with Raspberry Pi tutorial before proceeding. Here we are using Rasbian Jessie installed Raspberry Pi 3.

It is also assumed that you have access to your pi either through terminal windows or through other application through which you can write and execute python programs and use the terminal window.

As we told earlier in this tutorial we will interface the DS18B20 sensor with Pi and display the value of temperature on a 16*2 LCD screen. So the sensor and the LCD should be connected with Raspberry Pi as show below. 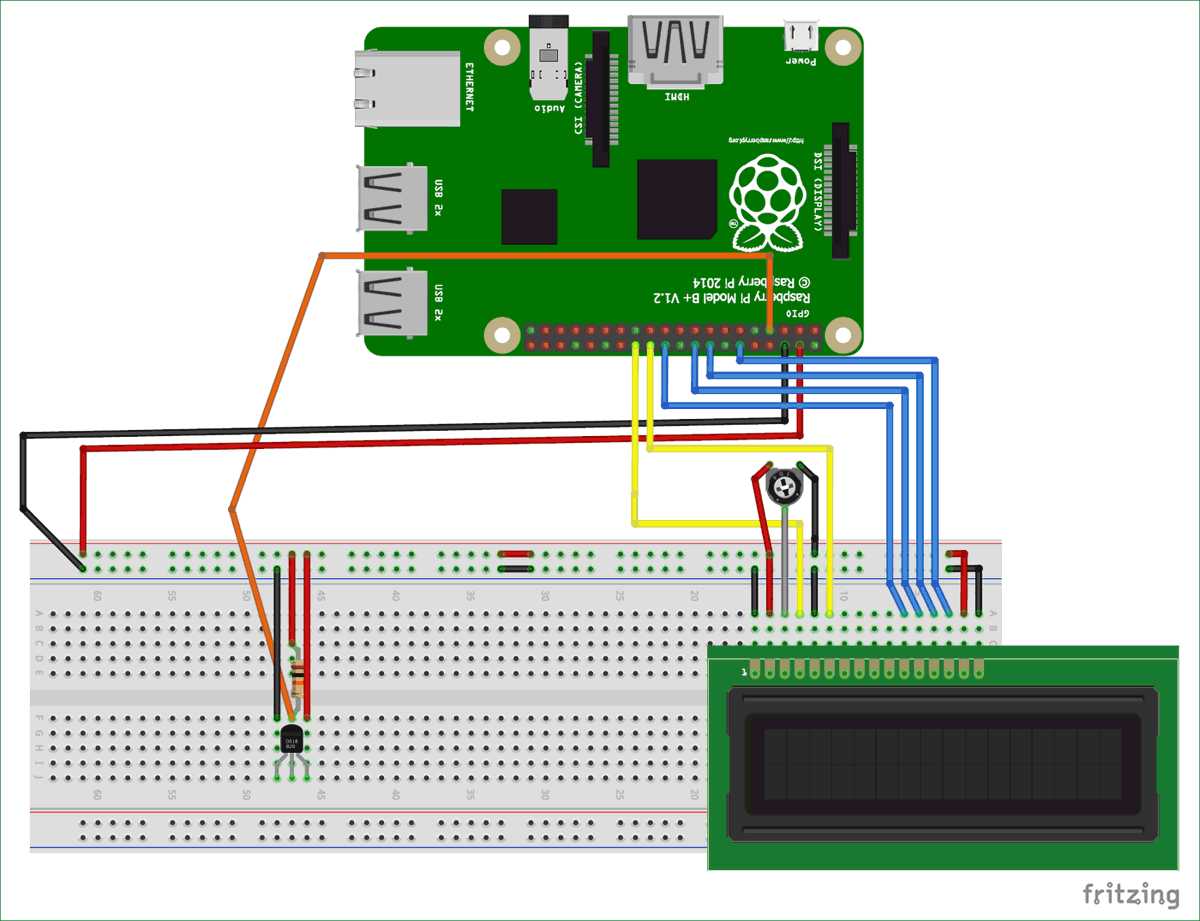 Follow the circuit diagram and make the connection accordingly. Both the LCD and the DS18B20 sensor works with the help of +5V which is provided by the 5V pin on the Raspberry pi. The LCD is made to work in 4-bit mode with Raspberry pi, the GPIO pins 18,23,24 and 25 is used for the data line and the GPIO pins 7 and 8 is used for the control lines. A potentiometer is also used to control the contrast level of the LCD. The DS18B20’s data line is connected to GPIO pin 4. Also note that a 10K resistor must be used pull the data like high as show in the circuit diagram.

You can either follow the circuit diagram above and make the connections or use the pin table to follow up with the GPIO pin numbers.

I have built the circuit on a breadboard using the single strand wires and male to female wires to make the connections. As you can see the sensor requires only one wire to interface and hence occupies less space and pins. My hardware looks like this below when all the connections are made. Now it time to power up the pi and start programming. 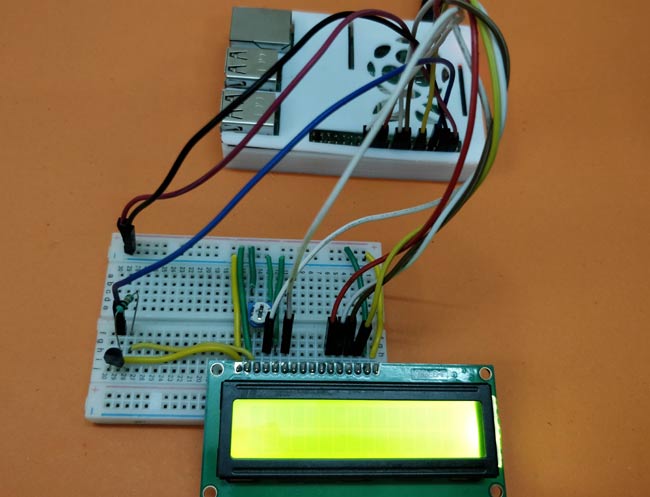 The value of the temperature will be displayed on a 16*2 LCD display. Adafruit provides us a library to easily operate this LCD in 4-bit mode, so let us add it to our Raspberry Pi by opening the terminal window Pi and following the below steps.

Step 2: The following line links to the GitHub page where the library is present just execute the line to clone the project file on Pi home directory

Step 3: Use the below command to change directory line, to get into the project file that we just downloaded. The command line is given below

That is it the library should have been installed successfully. Now similarly let’s proceed with installing the DHT library which is also from Adafruit.

Since the DS18B20 sensor communicates through One-Wire method, we have to enable the one wire communication on Pi by following the below steps.

Step 1:- Open the Commands prompt and use the below command to open the config file

Step 2:- Inside the config file add the line “dtoverlay=w1-gpio” (encircled in below image) and save the file as shown below 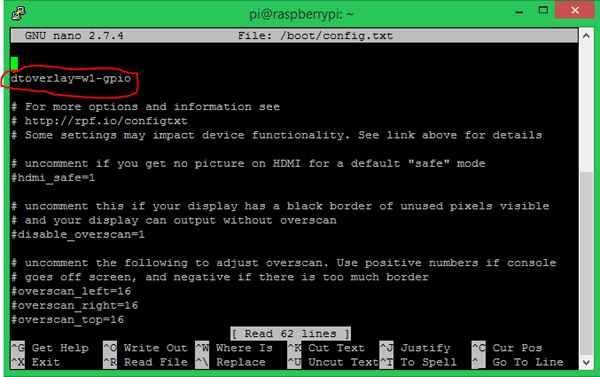 Step 3:- Use Ctrl+X to exit the file and save it by pressing “Y” and then Enter key. Finally restart the Pi by using the command

Step 4:- Once rebooted, open the terminal again and enter the following commands.

Step 5:- At the end of step 4 when you enter ls, your pi will display a unique number this number will be different for each user, based on the sensor, but will always start with 28-. In my case the number is 28-03172337caff.

Step 6:- Now we can check if the sensor is working by entering the following commands

Now we have our Pi ready to be programmed for LCD and to use One-wire protocol. So we can write our final program to read the value of temperature from the DS18B20 sensor and display it on the LCD screen. The complete python program to do the same is given at the end of this page. However below I have split the code into small meaningful snippets to explain them.

As always we begin the program, by importing the header files required by the program. Here we import time to deal with delay function, the LCD header to use LCD with Pi. The os header is used to handling files in the OS.

Next we have to mention the LCD pins which are connected to Raspberry Pi Pins. Use the GPIO pin chart provided above to know the pin numbers of the respective GPIO pins. Once we have declared, to which pins of PI the LCD is connected to, we can specify the number of rows and columns and finally initialize it by using the below lines of code.

After initializing the LCD we print a sample text message on the LCD. The character ‘\n’ is used to mention new line. After displaying the intro we introduce a delay of 2 seconds for the user to read the intro message.

Now, if you could recollect the step 4 of enabling one wire interface with Pi. We have to repeat the same line of code, so we use the os.system function to execute the same lines. Then we specify the file location from where the value of temperature has to be read. The device_folder variable points to the folder that starts with ‘28-‘ since we do not know the exact name of the folder we use the * symbol to open whatever that starts with 28. Finally inside that folder we use another variable called device_file which actually points to the file which has the value of temperature inside it.

Then we use function named get_temp inside which we define the procedure of reading the temperature from the file that we just linked in the above step. As we checked with the terminal earlier the file will have the value of temperature inside it but it will in the following format

The variable lines is used to read the lines inside the file. Then these lines are compared searched for the letter “t=” and the value after that letter is saved in the variable temp_string. Finally to get the value of temperature we use the variable temp_c in which we divide the string value by 1000. In the end return the temp_c variable as a result of the function.

Inside the infinite while loop, we only have to call the above defined function to get the value of temperature and display it in the LCD screen. We also clear the LCD for every 1 sec to display the updated value.

As always the complete python code is given at the end of the page, use the code and compile it on your Raspberry Pi. Make the connection as shown in the circuit diagram and before executing the program make sure you have followed the above steps to install LCD header files and enable one-wire communication on pi. Once that is done just execute the program, if everything is working as expected you should be able to notice the intro text. If not adjust the contrast potentiometer until you see something. The final result will look something like this below. 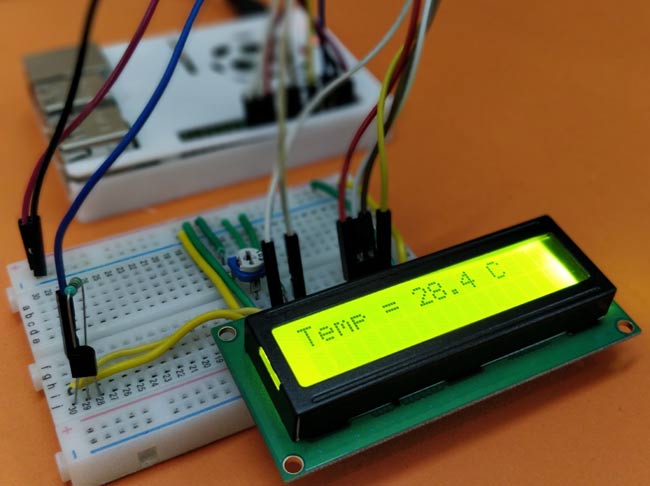 Hope you understood the project and had no problem building it. If otherwise state your problem in the comment section or use the forum for more technical help. This is just an interfacing project, but once this is done you can think ahead by working on a Raspberry Pi weather station, temperature E-mail notifier and much more.

The complete working of the project is also show in the video below where you can see the value of temperature being updated in real time.