The field of Robotics, Artificial Intelligence and Machine Learning is evolving rapidly that it is sure to change the lifestyle of mankind in near future. Robots are thought to understand and interact with the real world through sensors and machine learning processing. Image recognition is one of the popular way in which the robots are thought to understand objects by looking at the real world through a camera just like we do. In this project, let use the power of Raspberry Pi to build a Robot that could track ball and follow it just like the robots that plays football.

OpenCV is a very famous and open source tool that is used for Image processing, but in this tutorial to keep things simple we are using the Processing IDE. Since processing for ARM has also released the GPIO library for processing we will not have to shift between python and processing anymore to work with Raspberry Pi. Sounds cool right? So let us get started.

Note: It is mandatory to have a display connected to Pi through wires during programming because only then the camera’s video can be viewed

Setting up Processing on Raspberry Pi:

As told earlier we will be using the processing environment to Program our Raspberry Pi and not the default way of using python. So, follow the steps below:

Step 1:- Connect your Raspberry Pi to your monitor, keyboard and mouse and turn it on.

Step 2:- Make sure you Pi is connected to an active internet connection because we are about to download few things.

Step 4:- Once downloaded, extract the files in your ZIP folder in you preferred directory. I just extracted it on my desktop.

Step 5:- Now, open the extracted folder and click on the file named processing. It should open a window as shown below. 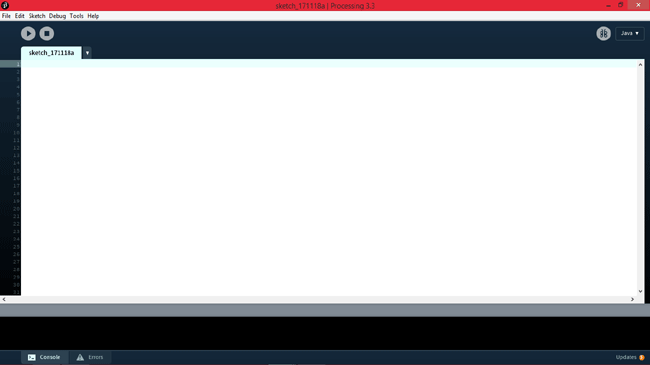 Step 6:- This is the environment where we will be typing our codes. For people who are familiar with Arduino, don’t be shocked YES the IDE does look similar to Arduino and so does the program.

Step 7:- We need two libraries for our ball following program to work, to install then just click on Sketch -> Import Library -> Add Library. The following dialog box will open. 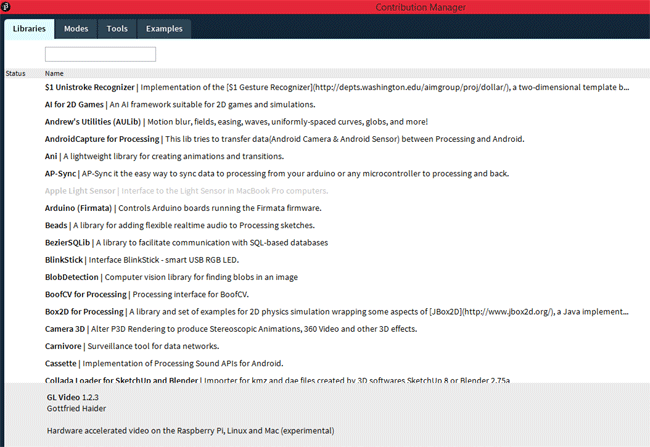 Step 8:- Use the top left text box to search for Raspberry Pi and hit enter, you search result should look something like this. 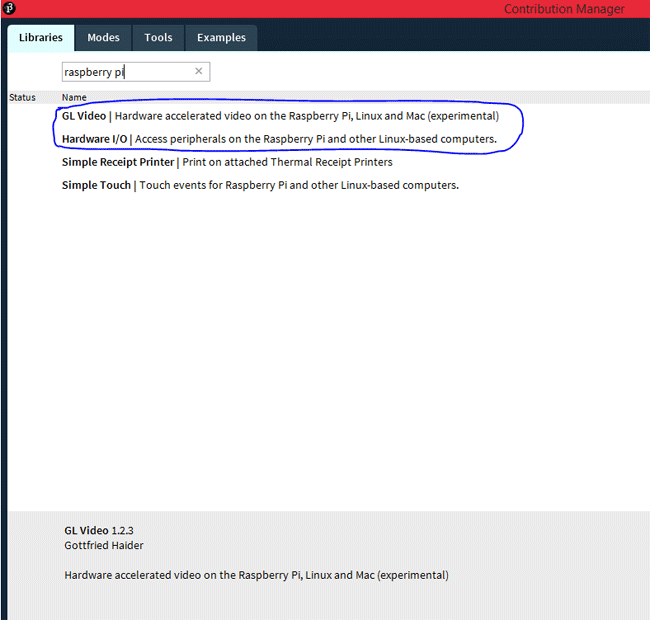 Step 9:-Search for the libraries named “GL Video” and “Hardware I/O” and click on install to install them. Make sure you install both the libraries.

Step 10:- Based on your internet the installation will take few minutes. Once done we are ready with for processing software.

The circuit Diagram of this Raspberry Pi Ball Tracking Project is shown below. 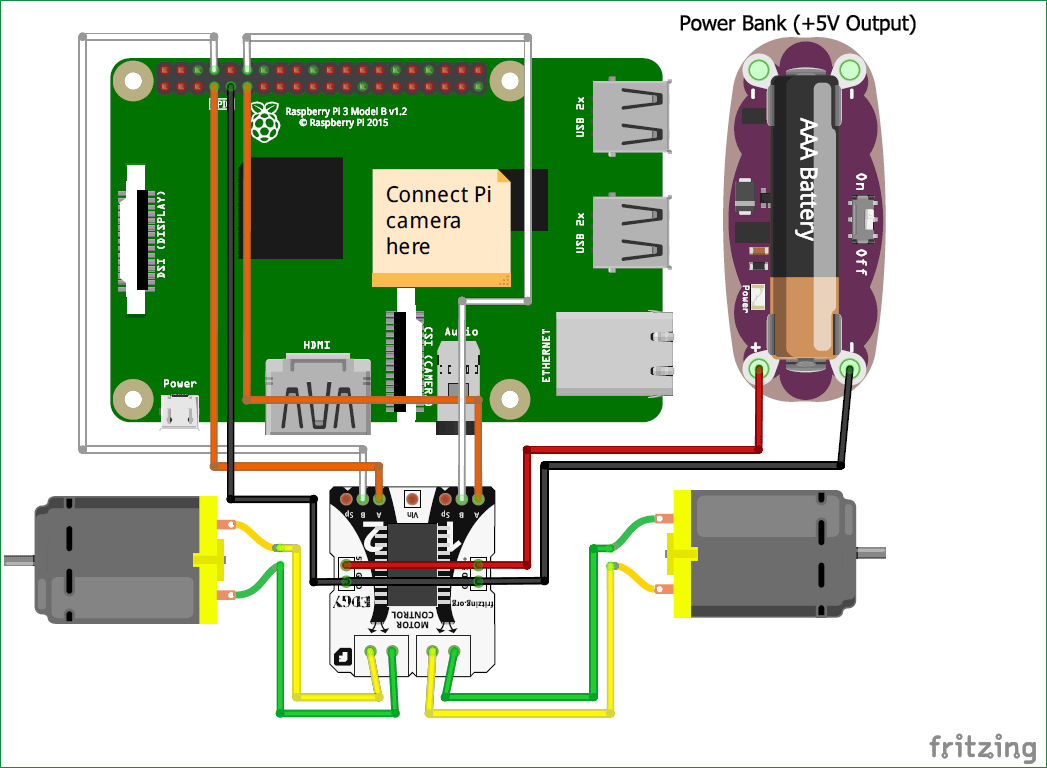 As you can see the circuit involves a PI camera, Motor Driver module and a pair of motors connected to the Raspberry pi. The complete circuit is powered by a Mobile Power bank (represented by AAA battery in the circuit above).

Since the pins details are not mentioned on the Raspberry Pi, we need to verify the pins using the below picture

To drive the Motors, we need four pins (A,B,A,B). This four pins are connected from GPIO14,4,17 and 18 respectively. The orange and white wire together forms the connection for one motor. So we have two such pairs for two motors.

That is it we are done with our Hardware connection, let’s go back to our processing environment and start programming to teach our robot how to track a ball. 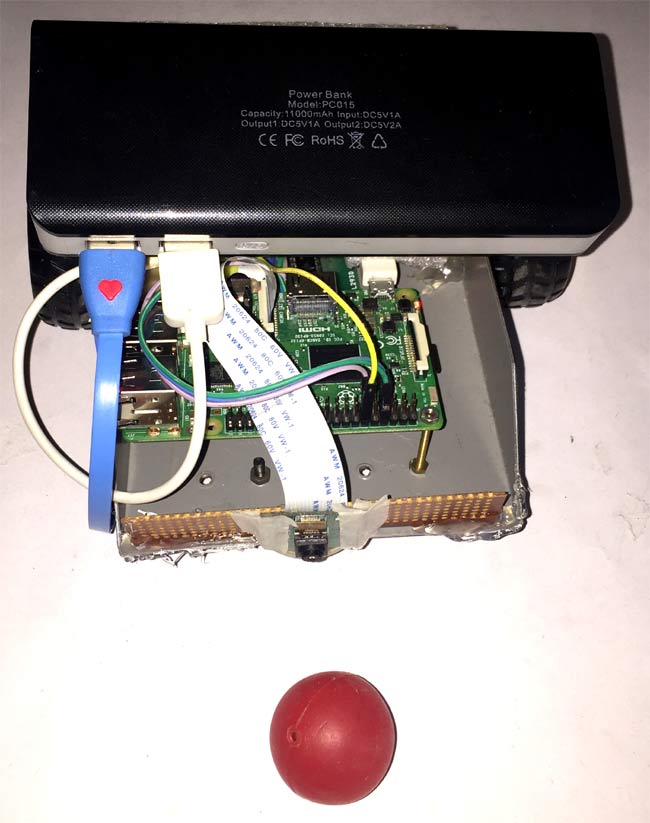 The complete Processing program of this project is given at the end of this page, which you directly use. Further just below, I have explained the working of the code so that you can use it for other similar projects.

The program concept is very simple. Although the intention of the project is to track a ball, we are actually not going to do it. We are just going to identify the ball using its colour. As we all know videos are nothing but continuous frames of pictures. So we take each picture and split it into pixels. Then we compare each pixel colour with the colour of the ball; if a match is found then we can say that we have found the ball. With this information we can also identify the position of the ball (pixel colour) on the screen. If the position is far left we move the robot to right, if the position is far right we move the robot to left so that the pixel position always stays at the centre of the screen. You can watch Computer Vision video of Daniel shiffman to get a clear picture.

Inside the setup function we initialize the output pins to control the motor and also get the video from the pi camera and size it in a window of size 320 * 240.

The void draw is like the infinite loop the code inside this loop will be execute as long as the program is terminated. If a camera source is available we read the video coming out of it

Then we begin to split the video frame into pixels. Each pixel has a value of red, green and blue. These values are stored in the variable r1, g1 and b1

We also draw an ellipse around the found colour to indicate that the colour has been found. The value of the position is also printed on the console, this will help a lot while debugging.

Similarly we can check the position of X and Y to control the motors in the required direction. As always you can refer the bottom of the page for the complete program.

Once you are ready with the hardware and program it’s time to have some fun. Before we test our bot on ground, we should make sure everything is working fine. Connect your Pi to monitor and launch the processing code. You should see the video feed on a small window. Now, bring the ball inside the frame and click on the ball to teach the robot that it should track this particular colour. Now move the ball around the screen and you should notice the wheels rotating. 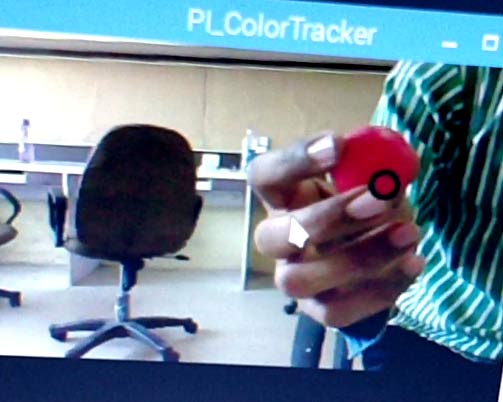 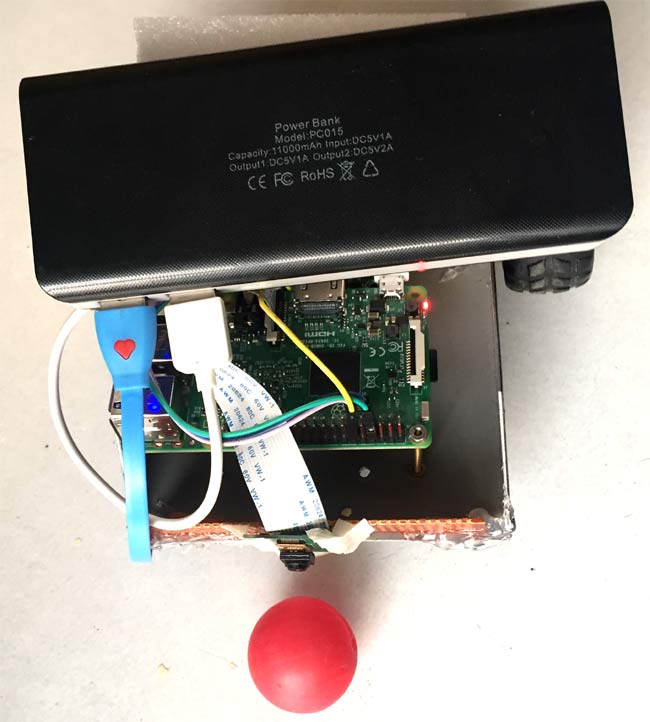 If everything is working as expected, release the bot on the ground and started playing with it. Make sure the room is evenly illuminated for best results. The complete working of the project is shown in the video below. Hope you understood the project and enjoyed building something similar. If you have any problems feel free to post them on the comment section below or help.

/*
Processing Raspberry Pi program for Ball following Robot
Project by: B.Aswnith Raj
Dated on: 18-11-2017
More detials on: www.circuitdigest.com
#This project would not have been possible without the help of Daniel Shiffman and Gottfried Haider
*/