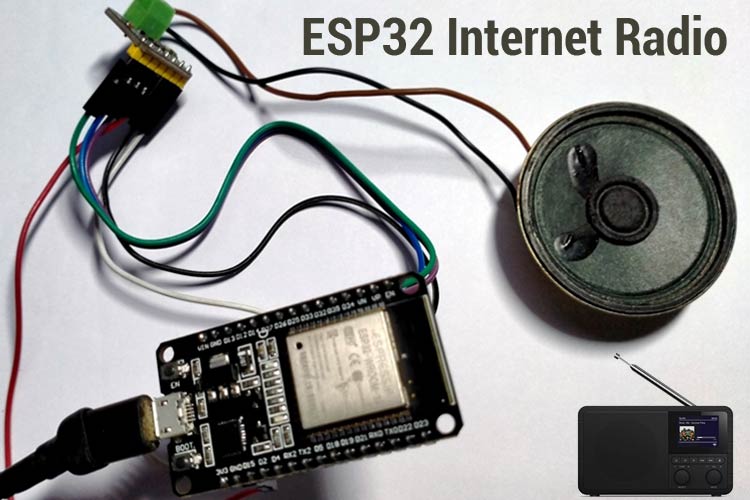 Analog Radios are getting extinct in this digital world since everything, from movies to songs is being directly streamed from the Internet today. Let’s see how an Internet radio can be made by leveraging some simple digital electronics, coding, and with an active Internet connection. Now, those who are following us regularly might already know that we have built a Raspberry Pi based Internet Radio previously, but in this tutorial, we will further simplify it by just using an ESP32.

Internet Radio, also known as streaming, web, IP, or online radio is generally used to telecast messages, music, discussions, etc. in the form of audio. In other words, it is a digital audio service transmitted via the Internet. However, broadcasting on the Internet or web is usually referred to as webcasting as no transmission happens broadly through wireless means.

The Internet radio can be created as a stand-alone device that is running through the internet, or as software running through a computer that is connected with the internet. Here, we will make a stand-alone device that will be connected to the Wi-Fi, access the internet, and finally play the audio. To build our ESP32 web radio, we have chosen the ESP32 development board (obviously) and the MAX98357A I2S Amplifier. If you are looking to build a simple FM Radio that can work offline, then you should check the linked article.

You will need the following components to build our Internet radio using ESP32. Most of the parts should be available easily.

As most of us already know, ESP32 is a very low-cost, low-power system on chip microcontrollers that has integrated Wi-Fi and dual-mode Bluetooth. We have previously built many ESP32 projects, you can check them out if interested. However, we are not going to use the Bluetooth functionality of ESP32 here, but still, we have selected ESP32 for the three reasons listed below.

Now, why is I2S important?

The Integrated Inter-IC Sound Bus (I2S) is a serial bus interface standard that is used for connecting digital audio devices. It is made by Philips Semiconductor. This interface is most commonly used by audio ADC and DAC components.

Since for running a radio we need to use a Speaker and need to produce analog output, we need some sort of Digital-to-Analog converter. Here comes the interesting part of the project. The MAX98357A module. It offers a Digital Class D amplifier that uses the Digital Audio Interface or I2S to communicate with microcontroller units.

The benefit of MAX98357A I2S module is listed below:

The MAX98357A I2S module that we have used in this project is shown below. 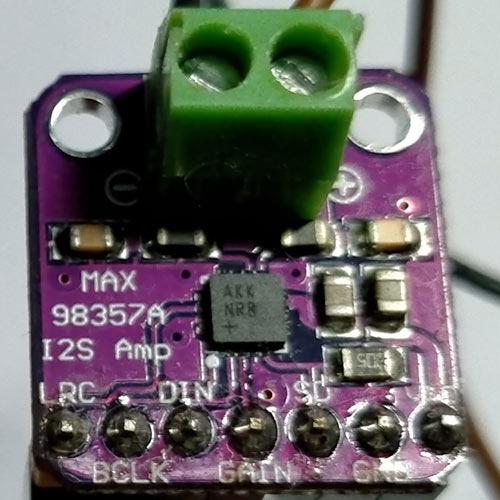 The schematic is simple. MAX98357 connection is given in the below table.

Since the Gain pin is connected with the GND, the gain is 12dB.

Well, this project uses the ESP32-audioI2S library that is available on GitHub. Before we get into the code, make sure you download the library from the below link and add it to Arduino IDE.

The full code is provided at the bottom of this page, you can directly copy and use the code, but if you want its explanation, then read further.

First, the libraries required for the project are included, as shown below.

Then, the pinouts of the MAX98357A are specified. If you are using the exact same module shown above you can leave it as shown below.

Put your Wi-Fi SSID and Password, this allows the ESP32 to connect to the internet.

In the setup, the WiFi password and SSID are being set, and the WiFi is started. After the Wi-Fi is connected, the Audio Pinouts are selected, the volume is also set to the maximum.

After all of this, the audio is played continuously in the void loop using the below code.

The circuit is connected properly as per the schematic and connected with the Wi-Fi. As soon as the set-up is powered it connects to the internet and starts streaming the audio from the URL mentioned in the program. 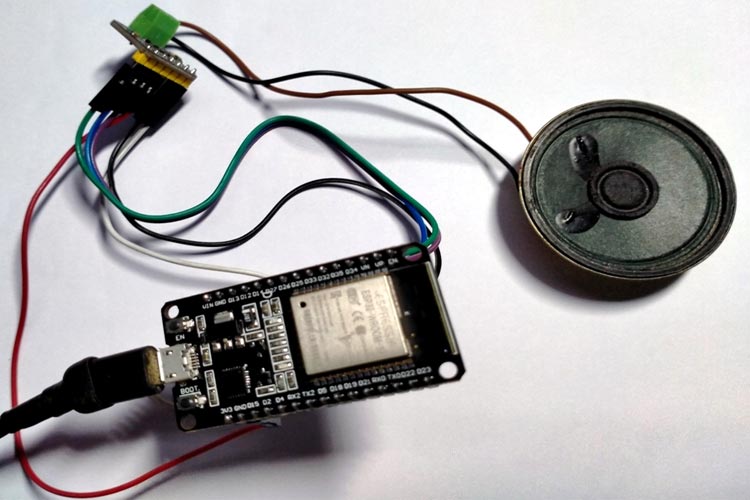 I also found that the audio is quite clear and very usable without any additional amplifiers in between. You can check out the video below that demonstrates the complete project to test the audio quality yourself.

Hope you enjoyed this ESP32 Radio project and would build one on your own. Again, this is a very simple set-up and you can improvise it with a display and some control knob to switching between multiple radio stations and even control the volume just like a traditional radio. If you have any questions or ideas, feel free to drop them in the comment section below.

Really useful project, i needed something simple to understand how it worked, and now i understand completely, all others i have looked at were a bit complicated, now i feel i can make my Internet Radio/Blutooth/USB/Memory card Player: Thanks :)

This need to be expanded

This need to be expanded perhaps with a waY to change stations display which sttion is playing and adjust volume. Do you have any pointers?

When verifying the sketch in

When verifying the sketch in the Arduino IDE, it stops at line 7 with this message: exit status 1 'Audio' does not name a type. I am confused.

Hi AL, have you installed the

Hi AL, have you installed the Audio.h library in your Arduino IDE?

Hi Ashish . Thank you for the

Hi Ashish . Thank you for the lovely project. I am an amateur , but I built this Radio and it works just fine. Need your help to increase the stations and also for station selection