HC-05 Bluetooth Modules are the go-to Bluetooth modules for any Arduino project! It’s easy to hook up and code in the Arduino IDE. In most projects, we usually connect to HC05 to an Arduino and use it to wirelessly communicate with another smart device like a mobile phone. This is fairly simple and we have built many interesting projects with it like Bluetooth Controlled Robot, Bluetooth Voice Control, Bluetooth Home Automation, etc. However, have you ever needed to connect two HC-05s together? It’s not as straightforward connecting an HC05 to a smartphone, there are some additional steps involved. This tutorial will guide you through this process. Let’s jump right in! 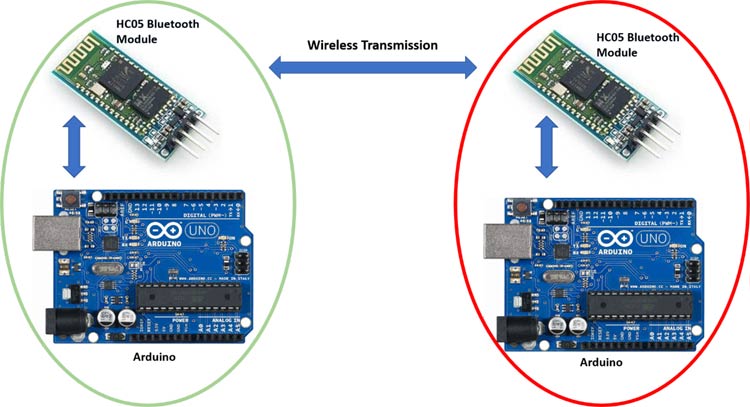 This is the basic circuit diagram. Wire up 2 of these circuits, one for master and one for the slave. For the connections, all we are doing here is connecting the HC05 to the Arduino. The Receiver (Rx) pin of the HC05 operates at the 0V to 3.3V range and the Arduino operates at the 0V to 5V range. So, we will use resistors (R1 and R2) to create a voltage divider to reduce the 5V output of the Arduino to 3.3V, so as to not damage the HC05 module. 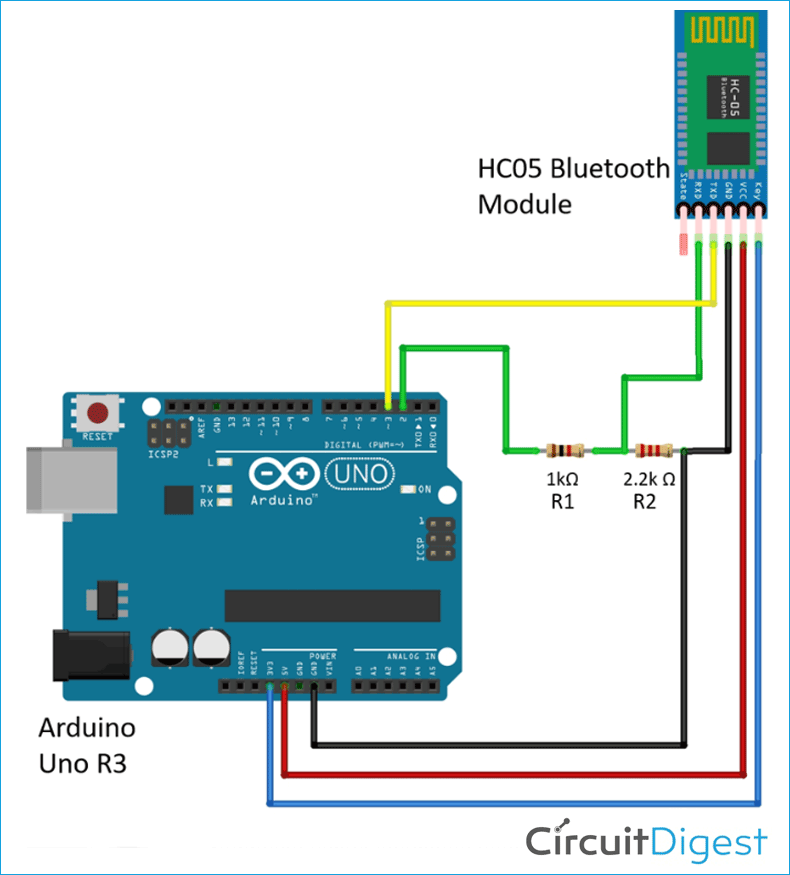 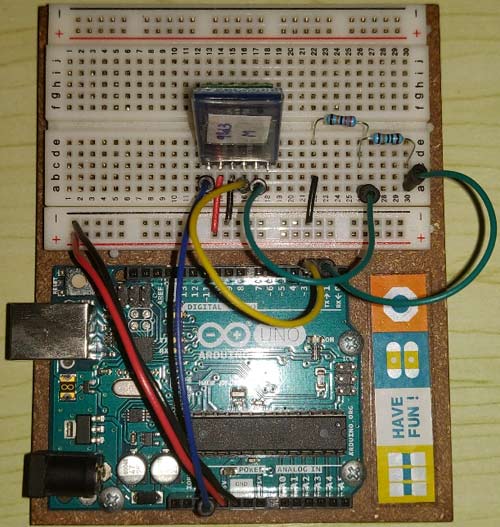 I’m using 1kΩ for R1 and 2.2KΩ for R2 but you can use any resistor value as long as the R2 is approximately double the value of R1 (R2 ≈ 2R1). Similarly, repeat the circuit for both master and slave, the Arduino Master Bluetooth Circuit and Arduino Slave Bluetooth Circuit are shown below.

Initial Configuration of the HC05 modules

This is the additional step required to connect two HC05 modules together. We need to change some settings inside the HC05 Bluetooth Module, to do this, we have to go into the HC05 module’s AT Command Mode and send commands to it through the Arduino IDE’s serial monitor. To do this, we need to write an Arduino code to send commands through the serial monitor to the HC05.

The code to configure the HC05 module can be found at the bottom of this page, the explanation of the code is as follows

Add the SoftwareSerial library to this code.

Give the Bluetooth connection some name (here I am using configBt), then tell the SoftwareSerial library which pin is Tx and which pin is Rx. The syntax is bluetoothName(Rx, Tx);

Now, enter the following commands in the table below to configure the master HC05 module:

Next connect your computer to your other HC05, the slave:

Firstly, power both the master and slave HC05 modules. After the power on and a few seconds have passed look at the red light on the HC05 modules.

Once your red lights are blinking at a low frequency (slow blinking!), you can be sure that both your HC05s are connected with each other, but we haven’t tested if data can be sent back and forth between the master and slave. After all, that’s the main purpose here.

Upload the below code to one of the Arduinos, this is the code to test transmitter (Tx), again the complete code for both transmitter and receiver can be found at the bottom of this page.

Following the previous code, we add the SoftwareSerial library to this code and define the transmit (Tx) and Receive (Rx) pin numbers. Then we name the Bluetooth connection and pass the Tx and Rx pin numbers to the library.

In the setup function, we are setting the baud rate for the Arduino serial monitor and the Bluetooth again. Do you see the difference here compared to the previous code? We are using a baud rate of 9600 baud. This is the default pre-set communication baud rate of the HC05 Bluetooth module when communicating with other Bluetooth devices. So, note that 38400 baud is for configuring the HC05 with AT commands and 9600 baud is the default baud rate of the HC05 module. Lastly, just like before we configure the Tx pin as output and Rx pin as an input.

Inside the forever loop, all we are doing is transmitting a random value of “123” through the HC05.

Upload this code to the other Arduino, this is the code to test receive (Rx):

Exactly the same as the previous codes, we configure the SoftwareSerial library.

The code in the setup function is exactly the same as the code to test transmit (Tx).

In the forever loop, we just need to receive what we are sending from the transmitting Arduino. If the receive buffer has received some data from the HC05, then display whatever is received in the serial monitor.

After you have uploaded the respective codes to each Arduino, open the Serial monitor to the receiving Arduino. Make sure you choose the baud rate as 9600 and the line ending as Newline in the serial monitor. If everything is working fine, you should be seeing 123. 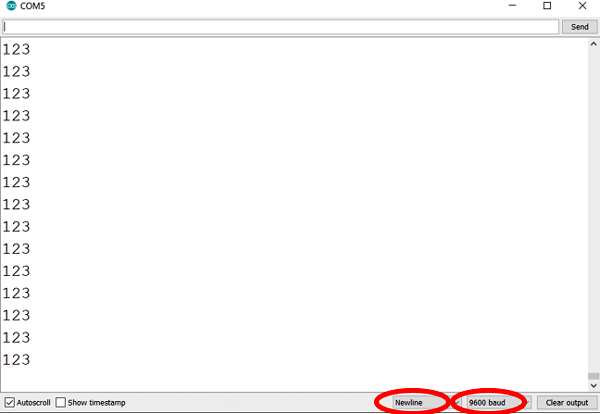 If all goes well, swap the HC05 modules to make sure communication can happen in both directions and WE ARE DONE!