RFID (Radio Frequency Identification) is an inexpensive and accessible technology. It can be used in many applications such as access control, security, asset tracking, people tracking, etc. You have seen the RFID Door Lock system in Hotels, offices, and many other places where you just have to place the card near RFID reader for a second and the door will be opened. We used an RFID reader and tag in many RFID based projects.

A solenoid lock works on the electronic-mechanical locking mechanism. This type of lock has a slug with a slanted cut and a good mounting bracket. When the power is applied, DC creates a magnetic field that moves the slug inside and keeps the door in the unlocked position. The slug will retain its position until the power is removed. When the power is disconnected the slug moves outside and locks the door. It doesn’t use any power in a locked state. To drive the solenoid lock you would need a power source that can give 12V @ 500mA. 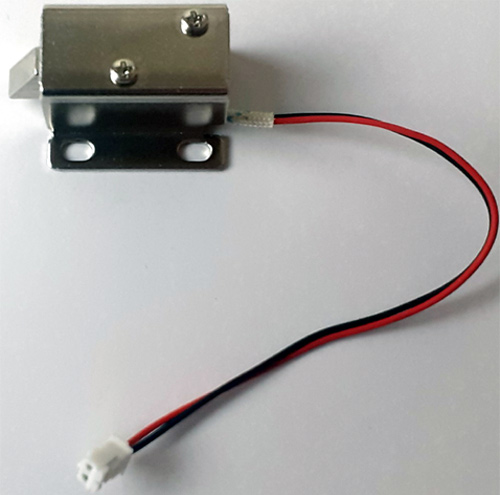 Circuit Diagram for Solenoid Door Lock using Arduino is given below.

After soldering all the components on the perf board according to the circuit diagram, it looks like the below image:

Complete code for this Arduino solenoid lock is given at the end of the document. Here we are explaining this code step by step for better understanding.

Start the code by including all the required libraries. Here it only requires two libraries, one for SPI communication between Arduino and RFID, and second for the RFID module. Both the libraries can be downloaded from the links given below:

Then define the Lock pin and Buzzer pin as an output, and Hall Effect sensor pin as input and initiate the SPI communication.

Inside the void loop, read the hall sensor values, and when it becomes low, close the door.

Once you are ready with the code and hardware, you can start testing the Solenoid Door Lock project. Here we have soldered all the components on the perf board so that it can be mounted on the door easily.

So to test it, mount the perf board on the door frame and magnet on the door so that it can detect the door movement. The below picture shows how the magnet and Hall sensors are fixed on the door. 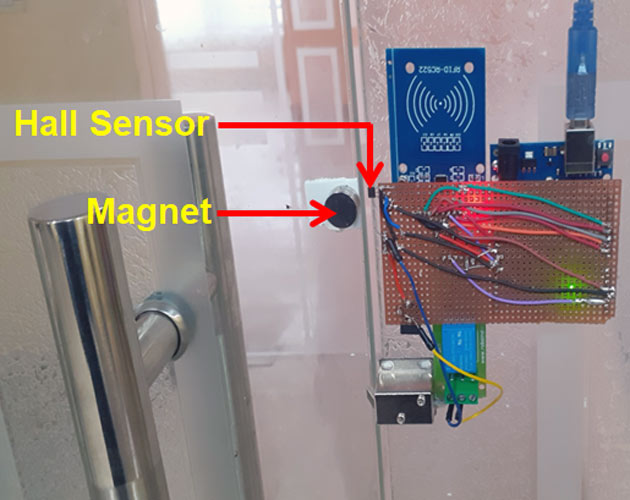 Instead of using the Hall Effect sensor, you can introduce a delay to keep the door open for a defined time.

Complete code and working video are given below. Also, check other types of door lock using different technologies.