Node.js with Arduino: Controlling Brightness of LED through Web Interface 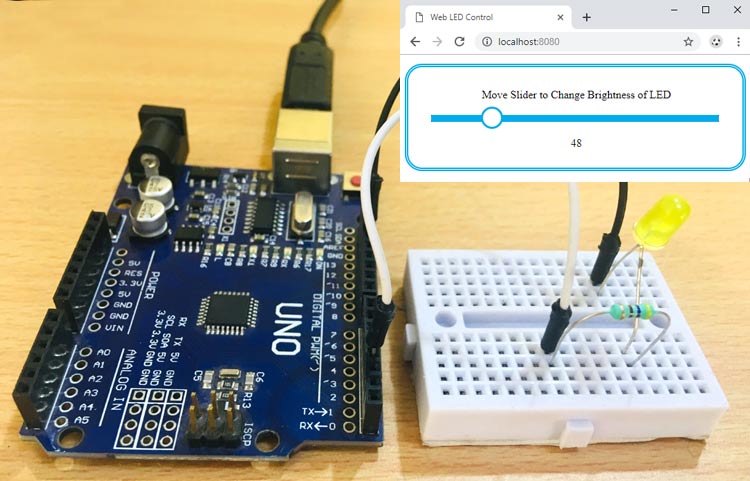 We have seen numerous examples of Blinking an LED using different Microcontrollers and different programming languages. Today, we will use a very popular JavaScript framework  Node.js to control the LED connected to Arduino Uno. We will also use Node.js to control the brightness of LED from a webpage using Arduino. By few tweaks and using ESP8266, this can be converted into an IoT project where the LED can be controlled from anywhere.

We have done an informative tutorial previously on Getting started with Node.js and Raspberry Pi to control an LED. In this tutorial, we will follow the similar approach i.e. the LED will be controlled using two methods such as:

Circuit diagram is very basic, we just need to connect an LED with Arduino. 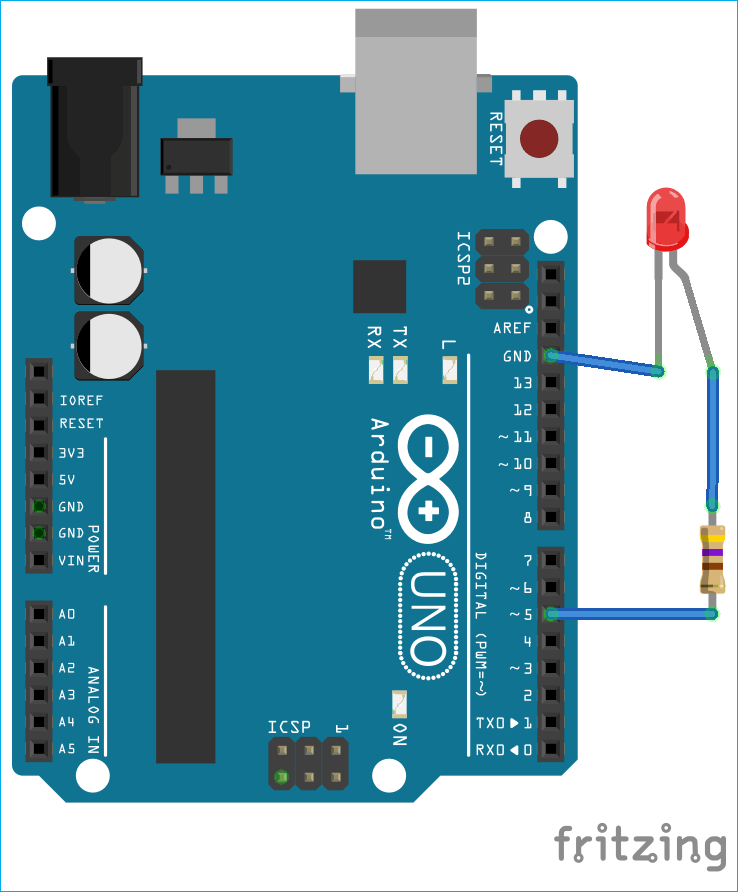 Before starting the coding and development, the Node.js has to be downloaded and set up. For downloading the Node.js environment just follow simple steps.

Step 2:- Run the .exe and follow the given instructions in the installer. 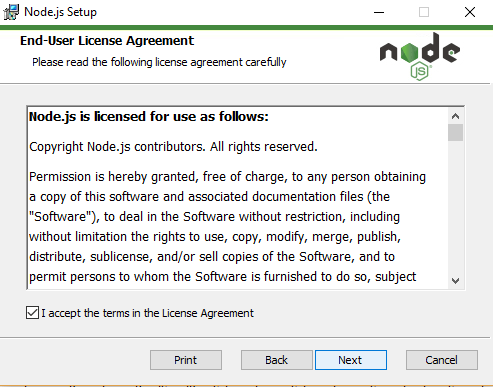 Step 3:- Restart your computer as it is recommended in the Node.js Document and also to use all the features of Node.js

Step 4:- To check if the node has been installed, open Command Prompt and type Node –v

Step 5:- The Node.js version will be displayed indicating the Node.js is installed. 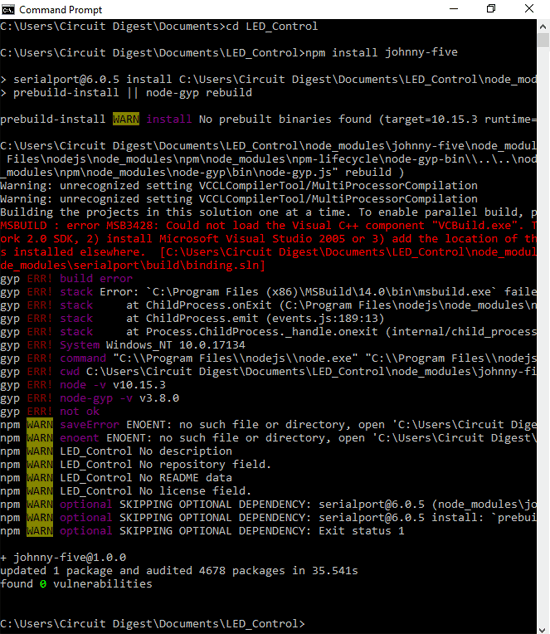 Step 4:- This will install all dependencies of Johnny-Five.

Step 5:- Run the below commands one by one to install these three libraries. 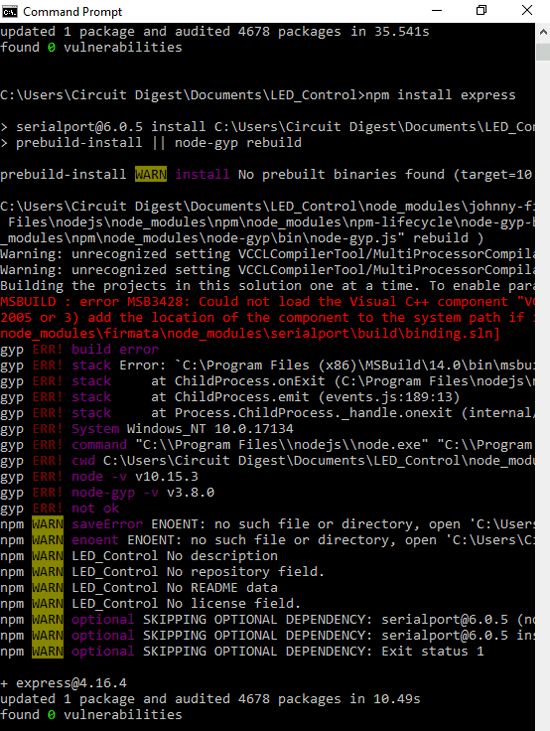 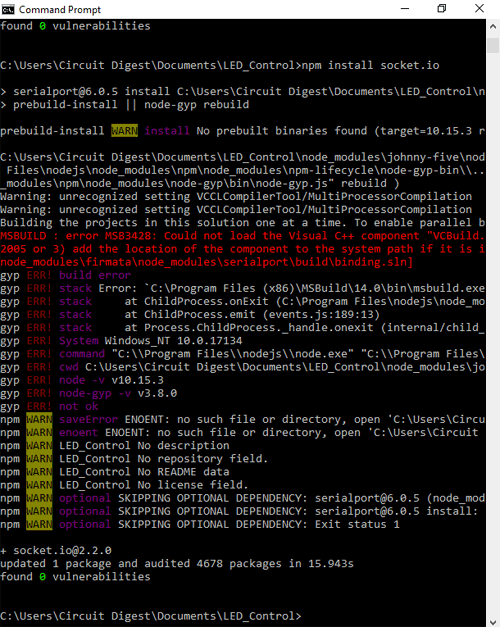 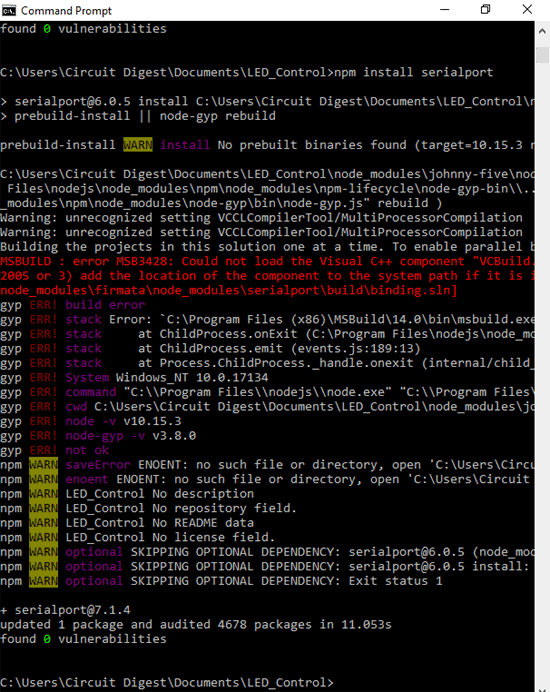 As told earlier the project is divided in two parts:

Blinking LED with Arduino and Node.js

To blink LED, the Arduino has to be Set up to communicate with Computer.

In order to make Arduino UNO accept command from Laptop to Control LED, the Firmata firmware has to be loaded in to the Arduino UNO. To load the Firmata Firmware, just follow these simple steps:

This will load the Firmata Sketch onto Arduino UNO and now the Arduino UNO is ready to accept any command from computer.

To write a Node.js program open any text editor (Notepad, Notepad++, etc.) and paste the ‘blink_led’ code attached at the end of this tutorial and save it with an extension of ‘.js’ i.e. (blink_led.js) in the “LED_Control” folder created before. We will discuss important steps in blink_led.js code file.

Initially define the Pin of microcontroller where led is connected. In this example, the LED is connected to Pin 5 of Arduino UNO. The ‘var’ in Node.js represents variable declaration.

The johnny-five module needs to be included and the board needs to be selected. The modules in Node.js are libraries. The function ‘require()’ will access the module.

The console.log statement is similar to print statement and it will print message. And the LED pin is set to output mode and the defined delay is given to blink led.

Similar to Blinking an LED with Node.js, this section will also have some parts i.e. Setting up Arduino UNO, Setting up Web Interface and Writing a Node.js program.

Setting up Arduino UNO to control Brightness of LED:

The serial port always looks for incoming byte and the byte is written to Pin 5 which is a PWM Pin.

That’s it. This will set the Arduino to latch the byte to PWM pin and will change the brightness of LED.

To control the brightness of led using web interface, one small piece of HTML code is written to have an interface in the Browser. To have interface follow simple steps below: 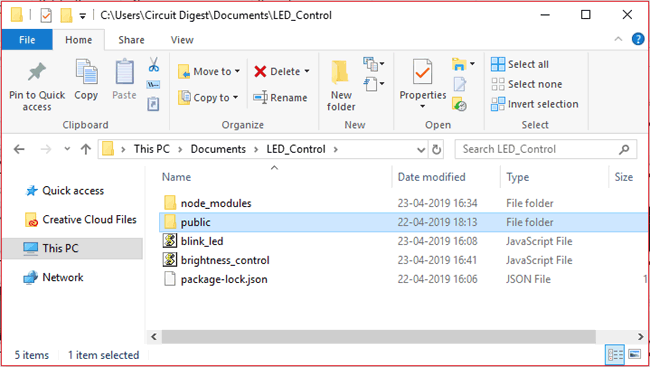 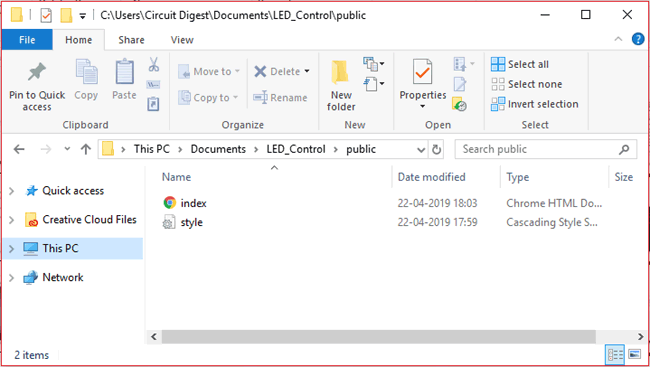 This will create a slider on webpage to control the brightness of LED using Node.js and Arduino. 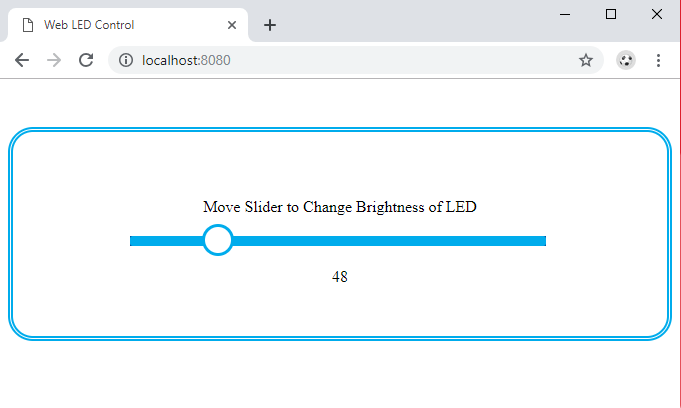 Controlling an LED from webpage is interesting to learn and it can done with other microcontroller by creating a webserver and host the webpage on webserver. Check all the webserver related projects here.

Next step would be writing the “brightness_control.js” sketch using Node.js and executing the code. The execution of the code will be bit similar to the Blinking an LED with Node.js.

To write a Node.js program open any text editor (Notepad, Notepad++, etc.) and paste the ‘brightness_control” code attached at the end of this tutorial and save it with an extension of ‘.js’ i.e. (brightness_control.js) in the “LED_Control” folder created before. You can also download the code from here.

Similar to Blink Led Node.js program, this section will also use modules (library). Include the ‘express’, ‘http’ and ‘serial port’ module.

Now set the COM port and baudrate. Note that in windows, it will always be COM with extension of number (COM6, COM4, COM24 etc.), so set below as required after ‘/’. Also set buadrate.

Start to listen the server at port 8080.

Set the brightness at 0 initially. Then latch the brightness data to IO with sockets module, which is a websocket module. The data will receive by Web Interface using socket protocol.

Now emit the LED brightness value got from socket to LED pin.

Now to run the program by following the steps below:

The complete code and working video of both section is attached below. Also if you have any doubt or suggestion then you can reach us through forum or comment below. All the code files can also be downloaded from here.

Part 2 -a- Arduino code for controlling Brightness of LED:

Part 2 -b - Node.js Code for Controlling Brightness of LED: