Ashish Bajaj, Co-Founder of COCO on how his platform could improve Data Privacy in IoT Devices through Cloudless P2P Networking Platform 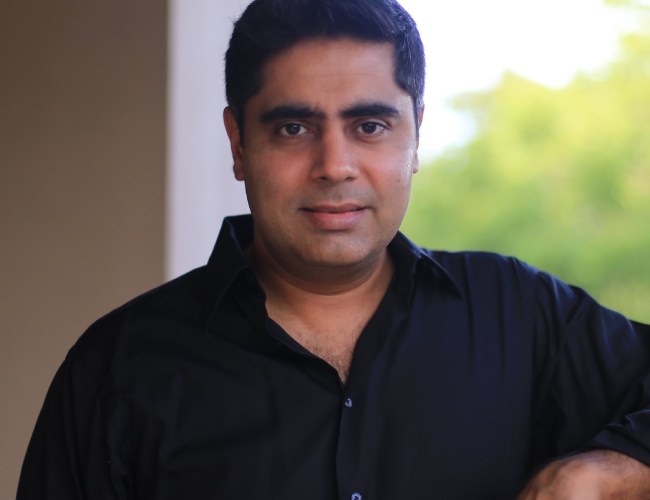 According to research predictions, 41.6 billion IoT devices will be generating around 79.4 zettabytes of data in the year 2025 and with the proliferation of IoT and Smart Homes; this is only set to increase. These growing numbers might result in a myriad of unsecured connected gadgets without any middleware to organize and secure them.

With a quest to provide connected experience with data privacy, Ashish Bajaj, one of the co-founders of Elear Solutions came up with the idea of creating COCO, which is a secure P2P middleware that separates the data plane from the business logic. It connects apps and devices into a mesh overlay network with a common language of communication to allow for apps and devices to interoperate easily.

Ashish has a strong technical background with a Master's Degree in Electrical and Computer Engineering from Georgia Tech that was focussed on DSP (Digital Signal Processing) and Embedded Systems. Being an Employee of Qualcomm India, Ashish has 15 + years of learning and problem-solving experience in areas like Video and Camera DSP Firmware, Low Power Chipset SoC Architectures, 2G/3G/4G Wireless Networking Power Optimizations, and Machine Learning Software Frameworks. Take a look at what he has to say about the company and their product!

Q. Elear Solutions has come up with COCO - a Cloudless P2P Platform for decentralized IoT Communication. What is the problem with existing Cloud-based Technology?

COCO enables decentralized communication – it’s like blockchain, except that it’s not. It instead uses a custom in-house developed P2P networking protocol that we call CP (Cluster Protocol). CP as a protocol is very different from the traditional Cloud-based HTTP Request <-> Response model, or MQTT Publish <-> Subscribe model. Instead, it provides a Real-Time Streaming interface and allows for building a cluster of apps, devices, and services to be able to intercommunicate with each other without a central server to broker the information.

For IoT devices, over the last 5 years, the cloud has become an integral component of the working system. While the cloud undoubtedly simplifies the development and analytics process greatly, it has various drawbacks like latency (due to distance), cost (due to ingesting bandwidth) and most importantly data privacy (due to centralized architecture). With the rollout of 5G, we are at a point of inflexion and over the next 3-5 years, I expect the rate of IoT deployments around the world is going to grow at a staggering rate. Use case right from Connected/Self-Driving Cars to AI and Vision Algorithms required to make our homes and cities safer are going to become commonplace.

So let’s take the connected car, for example, it is expected to generate 3 TB/day/car. Sending all this data over the cloud is extremely expensive. Further, the internet has no QoS guarantees, so we cannot rely on the cloud for deciding on if the light is green OR changing lanes, etc. Such use cases will need to be done right on the device OR on the edge of the network.

COCO was created to solve these Edge-to-Edge communication problems in a future imaginary world that is just around the corner. We have stabilized our software and ideas by implementing this in holistic Smart Home solution that we will be introducing in India very shortly. 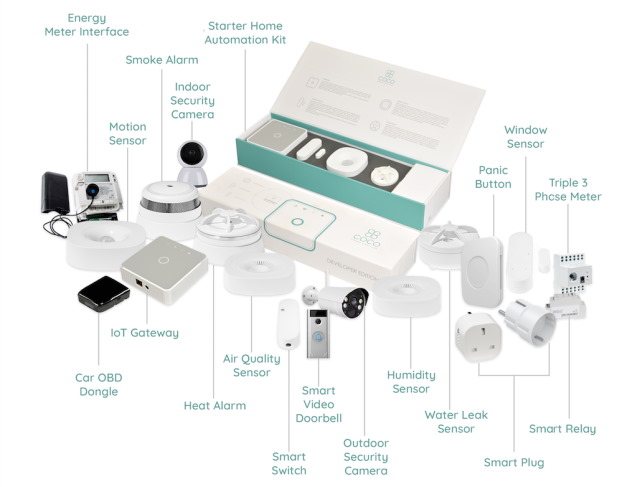 Q. Could security have become a major threat to the IoT Ecosystem? What would be your comments on the security features of today’s IoT products?

Look, security is a very hard thing to get right. Authentication/Authorization/Encryption are age-old problems. Some of them have been around since the time of the world war. And the field continues to improve year-over-year. The major problem in IoT is that we are using a wide array of devices, right from tiny microcontrollers to large compute capable machines. Some tiny microcontrollers don’t have a compute capability to run the latest security algorithms that are known to defend against many exploits.

But beyond this, in my opinion, there is a technology barrier. An OEM company that was traditionally delivering an electro-mechanical system like a washing machine or coffee maker now has to ramp up and create a fully connected system that includes firmware, software, and cloud. Many of them lack technical expertise in security.

Our view is that such companies should connect with IoT Platform vendors like us, and leverage our COCO platform that has built-in support for security as well as user data privacy.

Q. You call COCO, an Internet of Everything (IoE) platform. Why so?

We don’t like the term Internet of Things (IoT) in our company. That is primarily because there is not much consumer value of just connecting something into the internet. The value is derived by users when things are networked together in a uniform, interoperable and private system. Additionally, it’s not just things, but it’s also people and other software services that all co-exist on the internet. COCO can be used to create Apps, Services and Devices in an interoperable network that we call the COCONet. 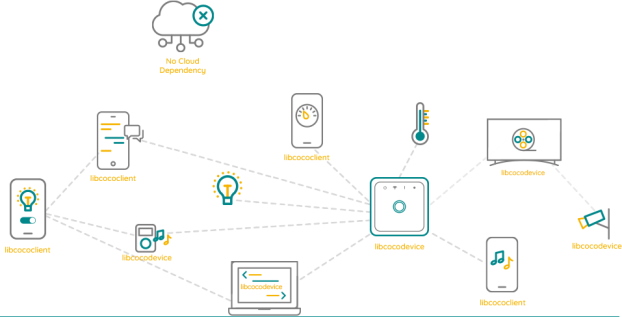 Imagine your Smartwatch as the key to your car, your car infotainment system connected to your in-home entertainment system so that you can move the content you were watching from the home to the car, and all of this working with distributed AI services that are constantly learning and helping improve traffic safety.

There is a future world coming where ‘Everything’ gets connected via the Internet – we hope, COCO as a platform has a really important and positive role to play in that Internet of Everything world.

Q. Why would hobbyists, developers, and device makers be interested in COCO? How will it be useful for them?

For building a community around COCO, we are launching our COCO Smart Home Solutions. We provide SDK’s for both device development as well as app development. Both these apps and devices will inherently work with the COCO Smart Home with minimal efforts.

Additionally, we have our App Store called COCO Grove that is under product development. Once launched, this will allow our development community to create Value Added Services that can be subscribed to by COCO users. We expect the hobbyist community to enjoy this, as it enables Serverless development of AI services, Storage service, Bridge/Cloud-to-Cloud services, that can be released and bespoke installed by COCO users for enhancing their Smart Home experiences.

We are currently in the early stage discussions within the company for developing a partner program. We will be looking to onboard System Integrators and Independent Software Vendors with our partner program to help create a community that enhances COCO to become the interoperable and private Smart Home Ecosystem.

Q. It's exciting to notice that COCO will support Arduino and Raspberry Pi, what other IoT Development Platforms & Frameworks can it support?

COCO SDKs are hardware agnostic POSIX compliant libraries, with a slew of support services to launch all of your IoT projects in the shortest amount of time. We have cross-compiled COCO to various many platforms like Linux, OSx, Android, iOS, Raspbian, etc. Additionally, we offer language bindings in C, Java, and Swift. We are looking to add support for NodeJS and Python very soon as well.

Q. Which communication protocols can COCO support? Why is LoRaWAN not on the list?

COCO itself is the decentralized communication middleware and platform. For specifically our home automation kit, we have identified a few radio technologies that are important for that market segment. We don’t believe LoRaWAN has a large role to play in the connected home space.

But having said that, there is a very high possibility that LoRaWAN is the right technology for the Smart Building Management Systems, and in those cases, there will be bridges required between Smart Homes and Smart Buildings to exchange telemetry M2M data and synchronize their learning and decision-making processes.

Q. How big is COCO’s community currently? Where do you see your products being used?

Currently, COCO is pre-launch. Our services will go live very shortly. We are looking forward to building a deep technical community around COCO to help us evolve our offering. Immediately on the launch, we expect our products to be sold directly to the consumer.

Q. How do you see the market for IoT in India? What hurdles are we facing in adapting the technology?

IoT in India is still in its early stages. We expect to see the Smart Home market becoming front and center between the year 2020-2023, and triple in its total market size. Having said that, there are two challenges in the India market:

We are currently forging some early-stage partnerships at the moment to address some of these issues out so that we can break some adoption barriers. Many of our ideas are experimental so I would like not to reveal them yet.

Q. How has COCO simplified App-to-App, App-to-Device, and Device-to-Device communication?

COCO solves a lot of the infrastructure and scaffolding problems that are common to any connected development. So when a developer uses COCO, he can focus his time and attention on solving his core problem and creating value for his users.

So let me explain this in a bit more detail:

#1 COCO is available in many languages and platforms, so the developer can choose a technology stack and programming language he is already comfortable in rather than learning something new.

#2 COCO provides the ability to create networks that include User Account Management, so he doesn’t need to waste time designing and maintaining a Authentication/Authorization User Management System.

#3 In the App-to-Device and Device-to-Device cases, COCO provides standardized communications, and so there is absolutely zero design time spent in writing backend code.

#4 Additionally because COCO is P2P and Serverless, in the App-to-App communication case the backend can be distributed across the network directly in the frontend code. So the developer doesn’t need to deal with backend development and the typical issues with hosting, scaling and dev-ops.

#5 Finally, from a user experience standpoint, because we are building a Realtime Streaming API, we have immense focus on Optimizing for latency, streaming (if required), connectivity transitions, support for offline mode functioning, etc.

This gives the developer a simple connectivity framework that is powerful for many use cases in that are around the corner in our IoE world.

Q. Tell us about your COCO Developer Edition kit? How to get one and get started?

The COCO Developer Edition is the most fun way to get started with COCO. If you can write code in C/Java/Swift, all you do is install the Client SDK, and write 5 lines of code to start changing the colors of a Zigbee light bulb. If you like to use Z-wave instead, you don’t need to change a line of code, your app works automatically with both radio standards! We abstract out everything. It’s a lot of fun to write software applications that integrate real-world actions and data with other computer and human-generated data.

Currently, the COCO Developer Edition is not available for sale or pre-booking. All I can say is that we are close to making some announcements about our launch dates and are eager to see it in our users’ hands. Here, is an early sneak peek at the kit that we bringing to bear: 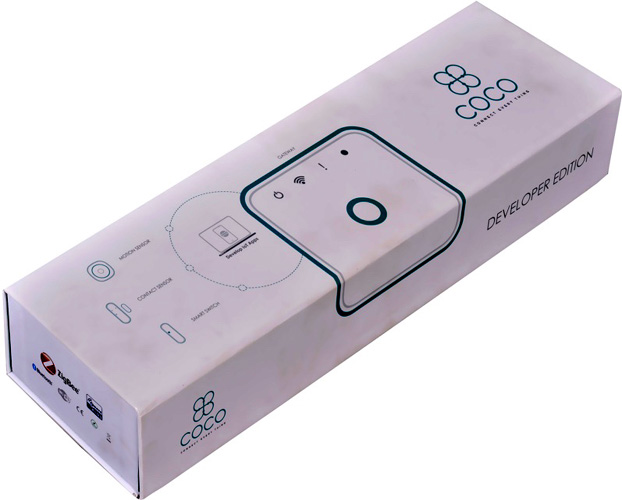 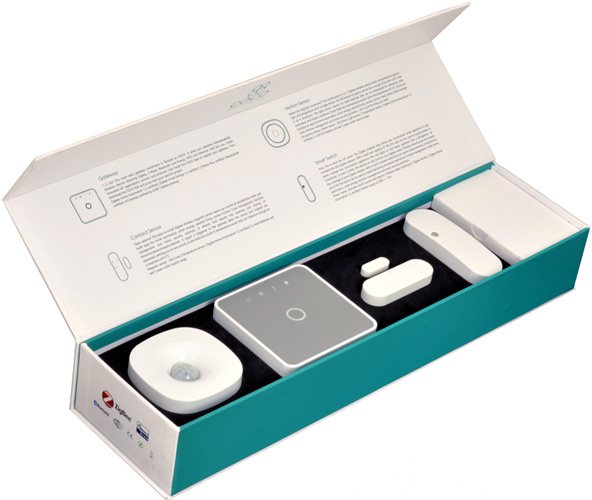 Q. What are your futures plans regarding Elear? Are there more products that we can expect?

We are excited to be introducing a whole lot of new products this year. We will be adding nine more Zigbee devices, an indoor camera, an outdoor camera, a doorbell, and my favorite a 4G Enabled OBD-II dongle that connects into my car and interoperates with my COCO Smart Home.

Another product category that I am very excited about is the COCO Grove that I mentioned earlier. This will empower both Developers and Users to exchange immense value on top of the COCO Platform.