Square wave to Sine wave converter circuit is an important analog circuit that converts square waveforms to sine waveforms. It has a broad spectrum of applications in many different areas of electronics, such as in mathematical operations, acoustics, audio application, inverters, power source, function generator, etc.

In this project, we will discuss how a square wave to sine wave converter circuit works and how it can be built using simple passive electronics. You can also check out other waveform generator circuits listed below.

A varying signal wave such as a square wave has a frequency, depending on this frequency, the output of the circuits gets changed. Due to this behavior of the circuit, the RC filter is called an RC integrator circuit. An RC integrator circuit changes the signal output depending on the frequency and could change the square wave to a triangular wave or triangular wave to a sine wave.

In this tutorial, we are using these RC integrator circuits (RC filter networks) to convert square wave to sine wave. The complete converter circuit diagram is given below, and as you can see, it has only very few passive components.

The circuit consists of three stages of RC filter circuits. Each stage has its own conversion significance, let's understand the working of each stage and how it contributes to converting square wave to sine wave by looking at the waveform simulation

To know how the square wave to sine wave converter works, one needs to understand what is happening in each RC filter stage.

And discharge voltage can be determined by–

Now, if a 10ms of a constant square wave is provided across this RC filter, the output waveform will be like this due to the charging and discharging of the capacitor in the RC time constant of 10ms.

The wave is the parabolic-shaped exponential waveform.

Now the output of the first RC network stage is the input of the second RC network stage. This RC network takes the parabolic-shaped exponential waveform and makes it a triangular waveform. By using the same RC constant charging and discharging scenario, the second stage RC filters provide a straight ascending slope when the capacitor gets charged and a straight descending slope when the capacitor gets discharged.

The output of this stage is ramp output, a proper triangular wave.

Where F is the frequency, R is the resistance value in Ohms, C is the capacitance in Farad.

Below schematic is a three-stage RC integrator circuit that is described previously. However, the circuit uses 4.7nF capacitors and 1 kilo-ohms resistors. This creates an acceptable Frequency range in the 33 kHz range.

The schematic is made in a breadboard and a function generator along with an oscilloscope is used to check the output wave. If you do not have a Function generator to generate the square wave, you can either build your own square wave generator or even an Arduino Waveform Generator which you can use for all waveform related projects. The circuit is very simple and hence it is easily built on the breadboard as you can see below. 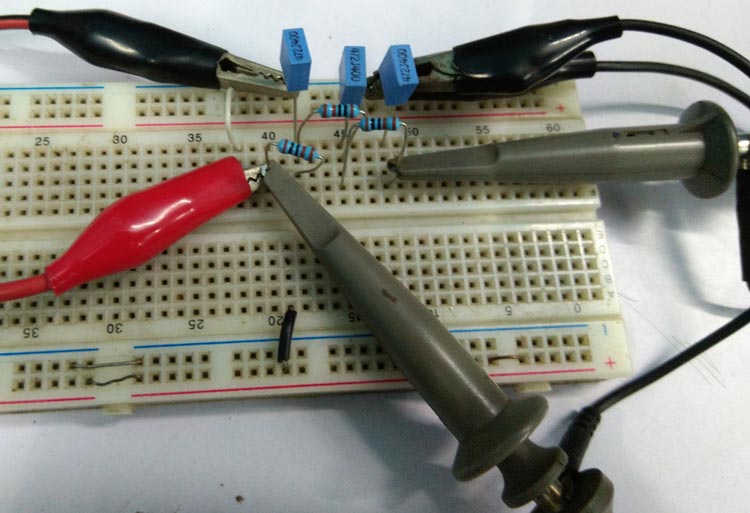 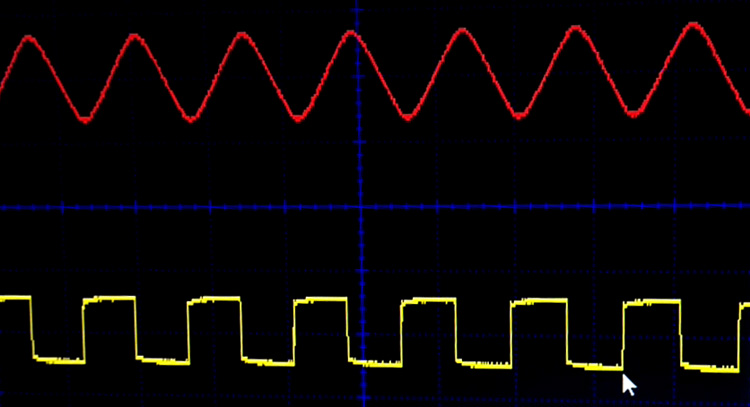 The circuit worked as expected for an input frequency ranging from 20kHz to 40kHz, you can refer the video below for more details on how the circuit works. Hope you enjoyed the tutorial and learned something useful. If you have any questions, leave them in the comment section below. Or you can also use our forums to post other technical questions.

How should the R and C…

How should the R and C values ideally relate to the load resistance?