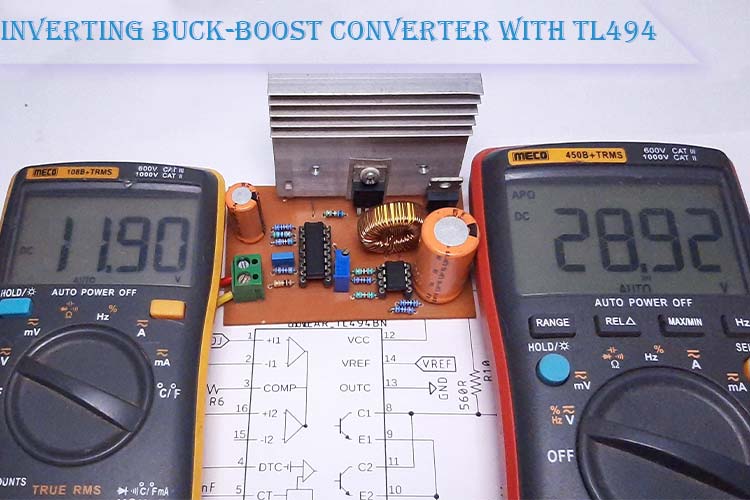 In this article, we are going to understand, design, calculate and test a basic High power Inverting Buck-Boost Converter Circuit based on the popular TL494 IC, and finally, there will be a detailed video showing the working of this circuit. So, without further ado let’s get right into it.

How does an Inverting Buck-Boost Converter work? 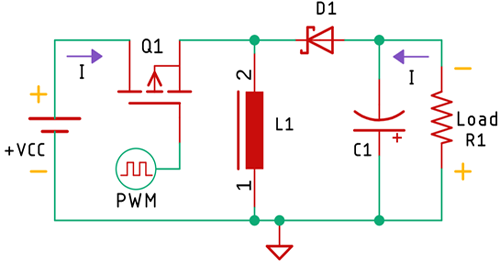 As you can see in the above image, the output of the inverting covert is exactly opposite to that of the input. Instead of VCC, we get Ground, and instead of Ground, we get VCC , so how does the voltage get inverted? To answer this question, we need to know the working principle of this circuit.

As you can see in the above diagram, the circuit consists of an inductor, a diode, a MOSFET as a switch, and a capacitor. We are operating this circuit with a switching signal. As the used MOSFET is a P-channel MOSFET, it’s on when the pulse is low, and it’s off when the pulse is high. Now when the MOSFET is on, the inductor charges and builds up its energy; while that is happening, the diode prevents the capacitor from charging. 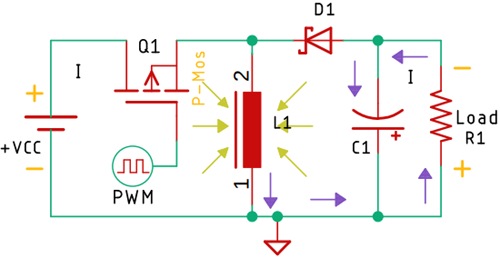 Now, when the MOSFET gets turned off, the energy of the coil is transferred into the capacitor, and from the capacitor, it flows to the load but because the diode is connected in the reverse direction, the polarity of the voltage is now opposing to the input that is why it’s known as the inverting buck-boost converter.

Components required for building the TL494 Based Buck-Boost Converter are listed below. The components used in this project are very generic and you can find most of them in your local hobby store. 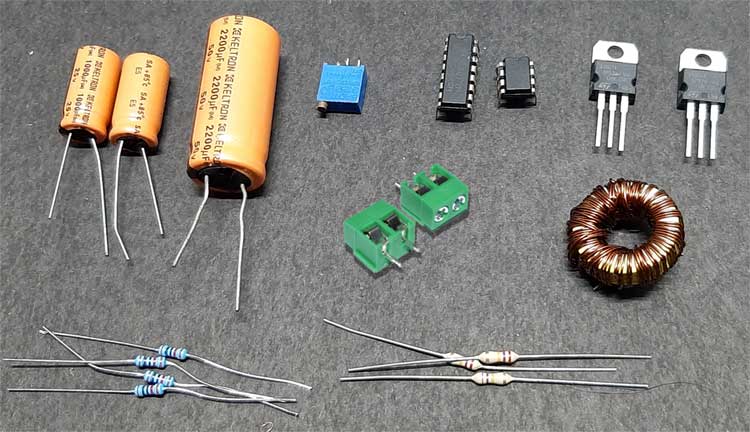 The complete circuit diagram for TL494 Based Inverting Buck-Boost Converter is shown below.

The working principle of this circuit is very simple. The circuit is divided into three parts, the first one being the TL494 PWM controller. We are using the TL494 PWM controller to drive the MOSFET. This IC is configured to switch at 100KHz switching frequency which is suitable for this type of application. If you want to know more about the TL494 IC and its configuration, do check out our previous project on TL494 Based Buck Converter where we have discussed about TL494 IC in detail. Up next, we have the circuit which is responsible for the buck-boost operation.

Finally, the resistors, R19 and R20 form a voltage divider that feeds back the voltage to pin 1 of the TL494 IC that regulates the PWM pulse depending upon the load condition. 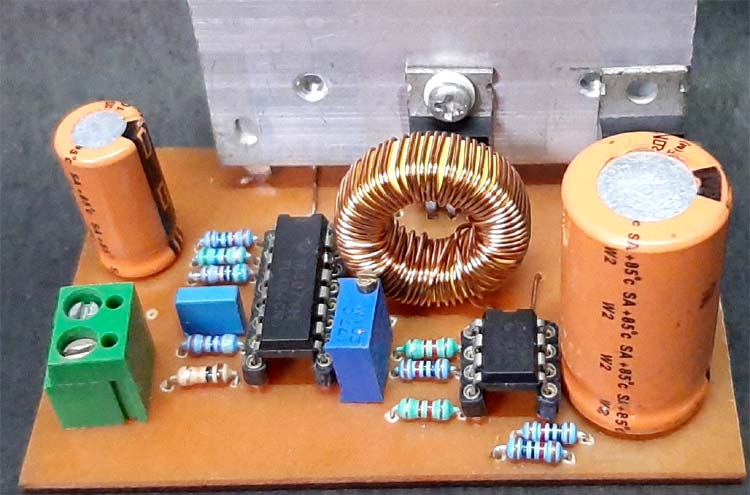 PCB Design for the TL494 Based Buck-Boost Converter Circuit

The PCB for our Buck-Boost Converter circuit is designed on a single-sided board. I have used Eagle to design my PCB but you can use any PCB design software of your choice, the 2D image generated by the Eagle is shown below.

For convenience, I made my handmade version of the PCB and it's shown below. I made some mistakes while making this PCB, so I had to use some copper wires as jumpers to fix that.

My board looked like this after the process was complete. 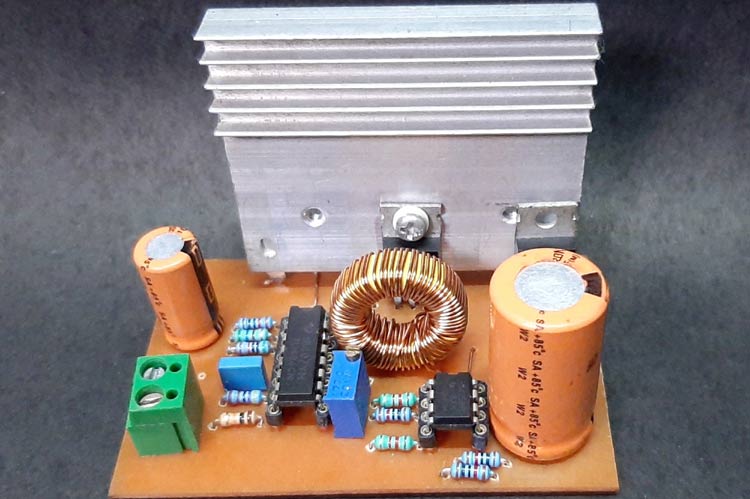 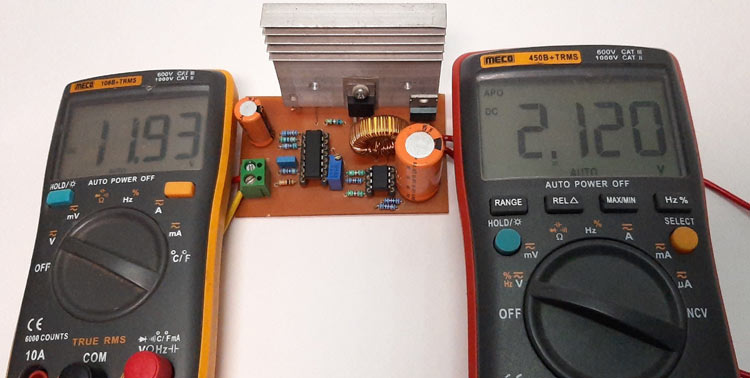 The image above shows that this circuit can reach a minimum voltage of 2.12V at minimum load condition. 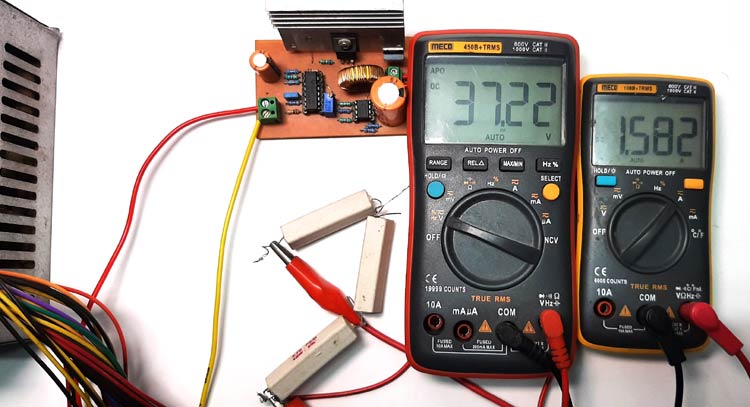 The above image shows you the test circuit that is used to determine the efficiency of the power supply. As you can see, the output voltage is 37.22V and the output current is 1.582Amps. I have used three resistors in series as load and the total output power was 58.8 watts. 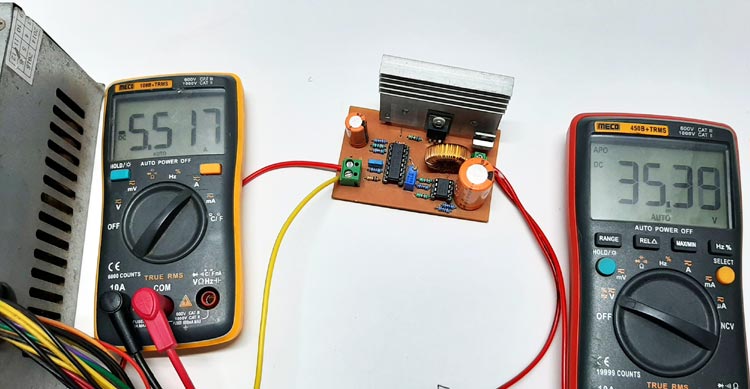 This TL494 buck-boost converter circuit is for demonstration purposes only hence no protection circuit is added in the output section of the circuit.

Can you modified feedback

Can you modified feedback circuit with tl431 (maybe with also optocoupler). Or just use voltage divider from output to tl494 op amp input?
Cz I'm not familiar with op amp voltage feedback.

Here we have used

Here we have used differential amplifier for amplification purpose. we are implify input using LM358

Hi, Is there any estimation

Hi, Is there any estimation of maximum continuous current it can withstand ?

If You want to calculate

If You want to calculate output current value then you can use P (power) = V (voltage) * I (current) formula at input and output side. If we are amplifying volatge with K times then current will reduced K times too.