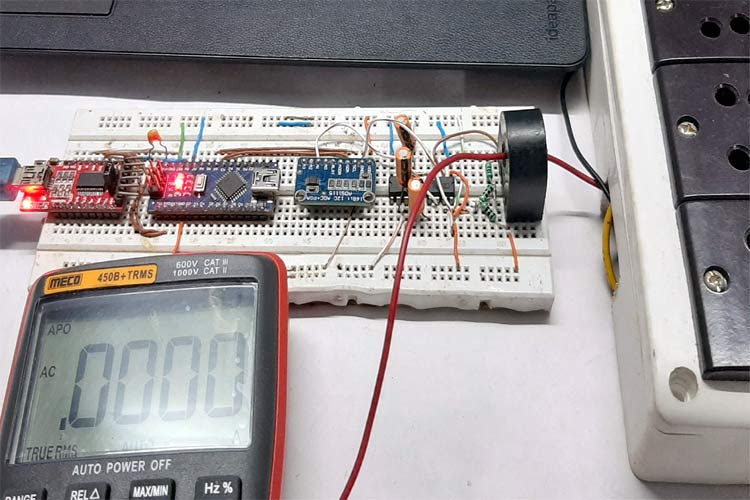 Generally, a current transformer is always in a short circuit condition with the assistance of a burden resistor, also, the current flowing on the secondary winding only depends on the primary current flowing through the conductor. 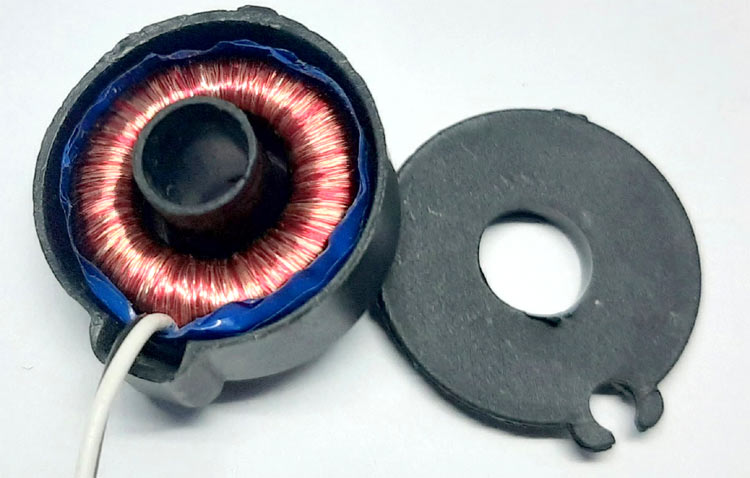 To give you a better understanding, I have torn down one of my current transformers which you can see in the above image.

It can be seen in the image that a very thin wire is wounded around a toroidal core material, and a set of wires are coming out of the transformer. The prime winding is only a single wire which is connected in series with the load and carries the bulk current flowing through the load. 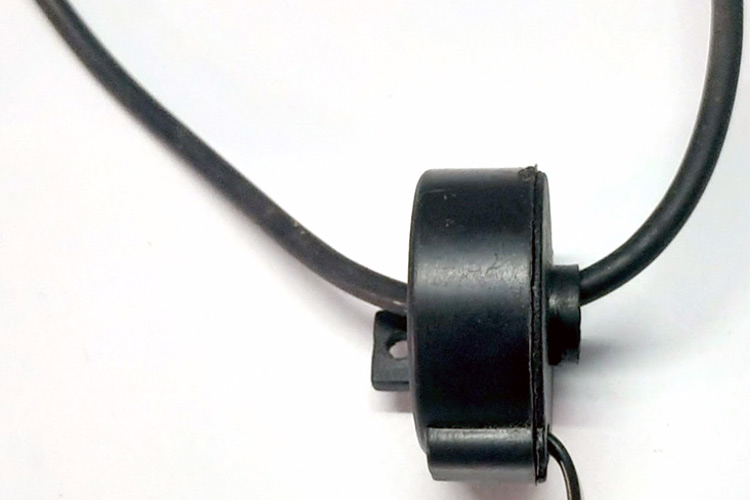 By placing a wire inside the window of the current transformer, we can form a single loop and the turns ratio becomes 1:N.

Like any other transformer, a current transformer must satisfy the amp-turn ratio equation which is shown below.

Is = Current in Secondary Winding

To find the secondary current, rearrange the equation to

Note! Please note that the current ratio is not the same as the turns ratio.

Now all the basic theory out of the way, we can turn our focus back to calculating the turns ratio of the current transformer in hand.

For an ideal CT, the primary and secondary current vector is zero. But in an actual Current Transformer, there will always be a difference because the primary has to supply the excitation current to the core and there will be a small phase difference.

How to Reduce Error in a Current Transformer?

It's always necessary to reduce errors in a system to achieve better performance. So, by below steps, one can achieve that

Back Calculating the Turns Ratio of a Current Transformer​ 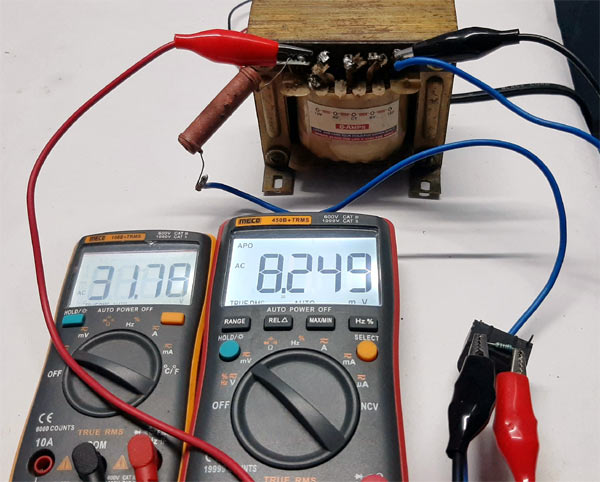 The test setup has been shown in the above image which I have used to figure out the turns ratio.

As I have mentioned before, the Current Transformer (CT) I own does not have any specification or part number just because I salvaged them from a broken household electric meter. So, at this point, we need to know the turns ratio to set the value of the Burden Resistor properly, otherwise, all sorts of issues will be introduced in the system, which I will talk more about later in the article.

With the help of the ohm's law, the turns ratio can be easily figured out but before that, I need to measure the big 10W, 1K resistor which is acting as a load in the circuit, and I also need to get an arbitrary burden resistor to figure out the turns ratio. 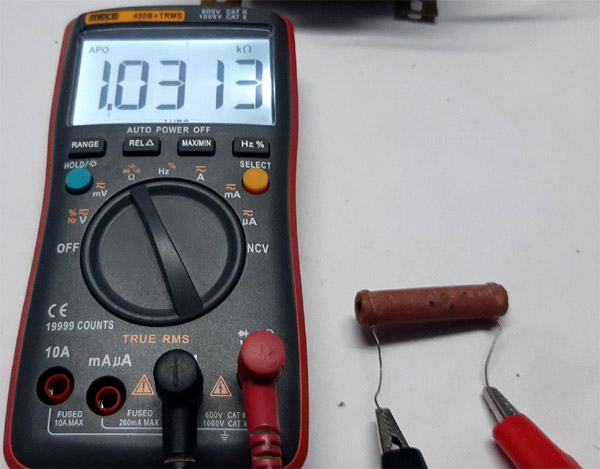 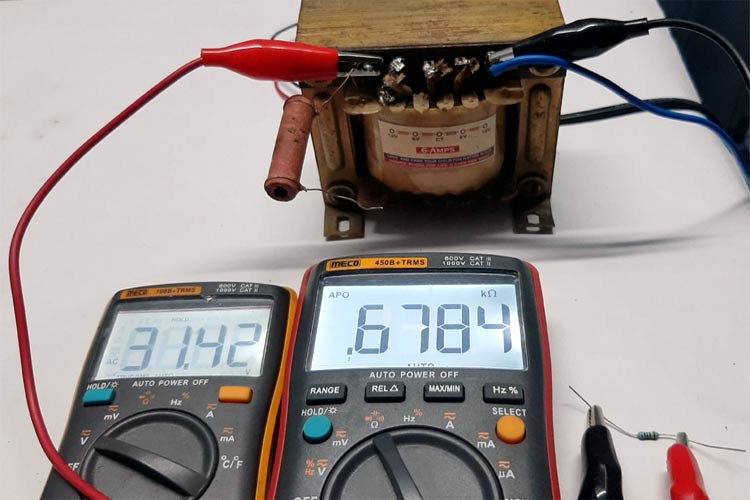 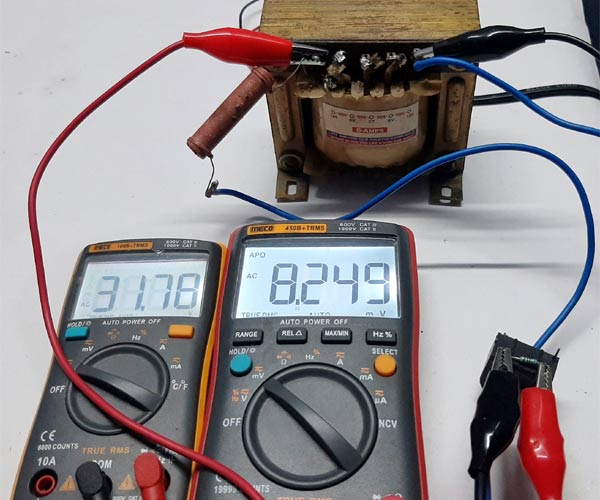 Summary of all the component values during the time of testing

The current flowing through the load resistor is

Let's find out the output current

Now, to calculate the turns ratio, we need to divide the primary current with the secondary current.

So the Current Transformer consists of 2500 turns (round off value)

Note! Please note the errors are mostly due to my ever-changing input voltage and multimeter tolerance.

The CT used here is a current output type. So to measure current, it needs to be converted into a voltage type. This article, in the openenergymonitor website, gives a great idea about how we can do that so I am going to follow the article

CT TURNS = No. of secondary turns, which we have previously calculated.

Max Primary Current = maximum primary current, which will be flown through the CT.

Note! Every CT has a Maximum current rating exceeding that rating will lead to core saturation and ultimately linearity errors which will lead to measurement error

Note! The maximum current rating of the household energy meter is 30A, so I am going for that value.

120.6Ω is not a common value, that is why I am going to use three resistors in series to get 120Ω resistor-value. After connecting the resistors to the CT, I did some tests to calculate the maximum output voltage from the CT.

Now, with the calculations done, I have set ADC gain to 1x gain which is +/- 4.096V, which gives us 0.125mV full-scale resolution. With that, we will be able to calculate the minimum current that can be measured with this setup. Which turned out to be 3mA because the ADC resolution was set to 0.125mV.

Write all the component without table

This is how the circuit will look on the breadboard.

In a previous tutorial, I have shown you how to accurately measure True RMS voltage with the help of AD736 IC and how to configure a switched capacitor voltage converter circuit that generates a negative voltage from an input positive voltage, in this tutorial, we are using both the ICs from these tutorials.

Here Arduino is used to displaying the measured values to the serial monitor window. But with a little modification in the code, one can very easily display the values on 16x2 LCD. Learn the interfacing of 16x2 LCD with Arduino here.

Complete code for the current transformer can be found at the end of this section. Here important parts of the program are explained.

We start by including all the required libraries files. The Wire library is used to communicate between the Arduino and the ADS1115 module and the Adafruit_ADS1015 library helps us to read data and write instructions to the module.

Next, define the MULTIPLICATION_FACTOR which is used to calculate the current value from the ADC value.

The 16-bit ADC spits outs 16-bit long integers so the int16_t variable is used. Three other variables are used, one to store the RAW value for the ADC, one to display the actual voltage in the ADC pin and finally one to display this voltage value to current value.

Begin the setup section of the code by enabling the serial output with 9600 baud. Then print the gain of the ADC which is set; this is because voltage more than the defined value can certainly damage the device.

Now set the ADC gain with the ads.setGain(GAIN_ONE); the method which sets the 1-bit resolution to  0.125mV

After that, the ADC begin method is called which sets everything up in the hardware module and stats conversion.

Complete Arduino code is given below: 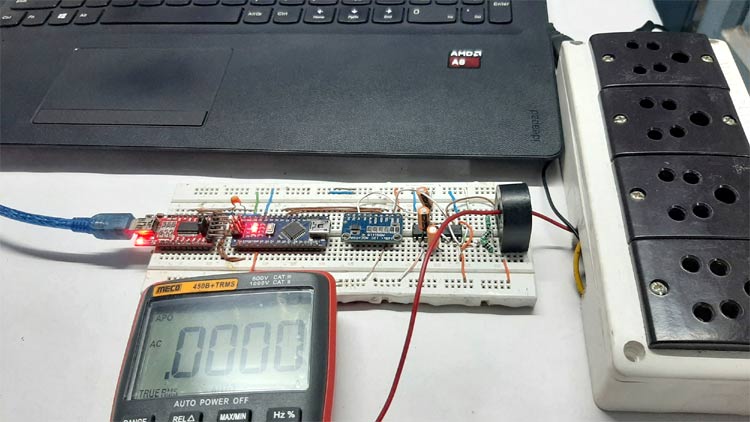 Tools used to test the circuit

To test the circuit the above setup was used. The current is flowing from the CT to the multimeter, then it is going back to the main's power line.

The few mA errors you saw in the video (given below) are just because I have made the circuit in a breadboard, so there were many ground issues.

Firstly, thanks for a great article.

I believe you have a mistake in your formula for TR. You have this:

The right side of the formula is inverted. It should be

Correcting this will then match your (correct) converted formula

Hi! I have two questions:

Hi! I have two questions:

1.) How did you calculate the multiplication factor?

2.) Could I use the ADC of the microcontroller? It has only a 10bit ADC, and it is OK for me. Of course, I have to use an external reference voltage source.