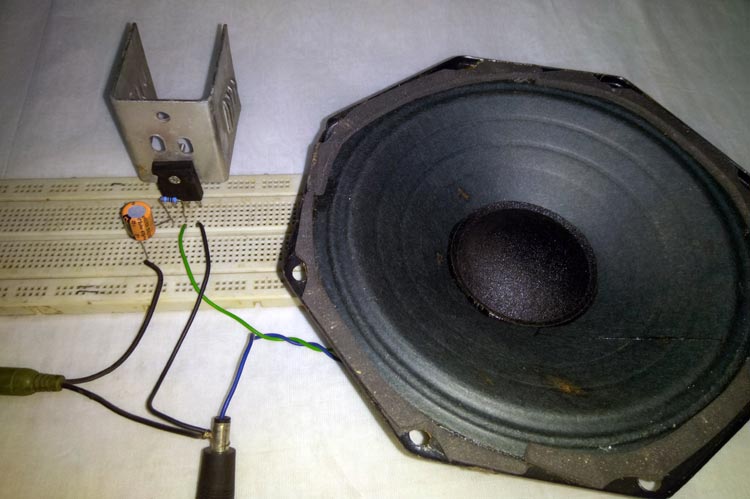 Loudspeakers are heavy loads, and they normally require high current to be driven which is provided by an external circuit. This is because sometimes the produced sound output, let's say from a microphone or the pickup coils of the guitar, do not produce high current high amplitude output, therefore, it is not suitable to drive a loudspeaker. This is why we have something called Audio Amplifiers. There are many classes of Amplifiers and we have previously built a lot of Audio Amplifier circuits ranging from small 10W amplifiers to heavy 100W Power amplifier. We as well know that there are several types of amplifiers in electronics, some common names that you might have come across are Buffer Amplifier, Pre-Amplifier, and Power Amplifier.

In this project, we will drive a speaker using a simple and low-cost power amplifier, for the power amplification circuit we will use the TIP35C power transistor.

For this Audio Power Amplifier project, the following components are required -

The circuit diagram for TIP35C Audio Power Amplifier is shown below. 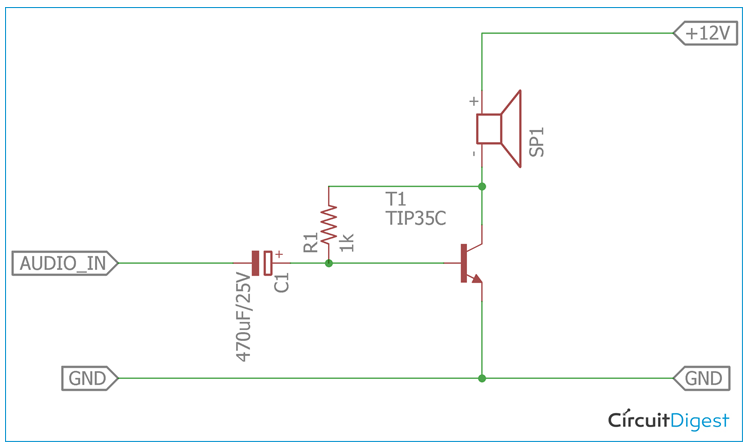 As a Class A amplifier requires to drive a high amount of load current the transistor rating must be adequate to compensate with the high collector current. The load, i.e the Loudspeaker is connected across the collector. Therefore, the transistor must have a high collector current. This is successfully delivered by the TIP35C as it is a 100V power transistor along with a 25A of collector current. However, the major disadvantage of the above circuit is the overall efficiency of the power amplifier. Since the circuit is a basic construction of class A amplifier, almost a large amount of current is lost as heat dissipation across the power transistor TIP35C. It is mandatory to connect a large heatsink to accommodate heat dissipation. The conversion efficiency of the circuit is low.

The resistor R1 is used as a base resistor which is providing sufficient base current to drive the transistor in saturation point. The 470uF capacitor C1 is an essential component of the circuit. This is because the capacitor is serving two purposes. First of all, the capacitor is isolating the base with the input supply source so that the base voltage or current could not affect the audio source, and the other purpose is to act as a DC blocking capacitor from the input source. Capacitor blocks DC and only passes AC. This is effectively served by the 470uF capacitor and it allows only AC frequency to pass.

Power supply positive is connected in series with the loudspeaker. The Transistor is sourcing the speaker with GND. Therefore, small changes in the base could manipulate the load, i.e loudspeaker.

The circuit is constructed in a breadboard. My breadboard set-up looks something like this below. As you can see the circuit requires very less external components and hence easy to construct 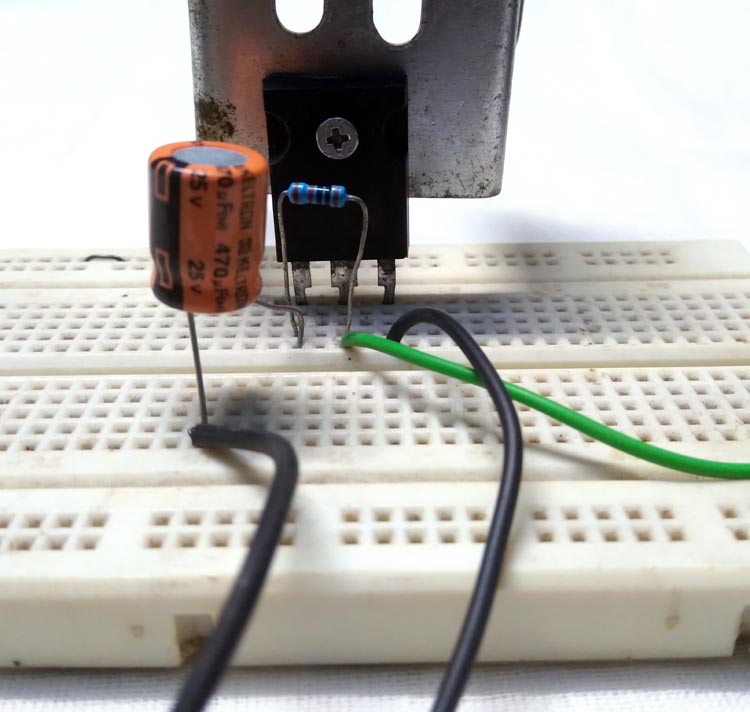 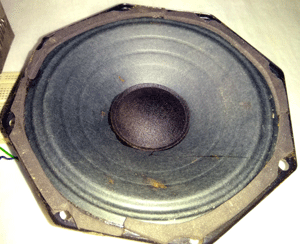 Selecting the right Speaker is important for any power amplifier. A poor performance speaker can ruin a well-constructed amplifier. So, for anyone who is constructing an audio-related application board where the speaker is the main road, be sure that you have a well functioning speaker. For the testing of this power amplifier circuit, the above speaker is used. This speaker is more than 60 years old and it is harvested from an old tube amplifier. However, this speaker is reconstructed by me almost three years ago. It is a 4 Ohms speaker that can provide almost 9 Watt of power output and the diameter of this speaker is 6 inches in diameter.

The next thing is the audio input. The audio input is given by a mobile phone. Since a mobile phone already has an inbuilt preamplifier, it can be considered that the testing is done with a basic preamplifier before the power amplifier during the testing phase. The circuit worked pretty well and the output performance is quite well. The full testing video can be found at the bottom of this page.

It is a basic type of Class A power amplifier circuit with 12V input and using a minimum component, only three. However, it is not as good as the traditional Power Amplifier available in the market. Further improvement can be done and the overall performance can be increased.

Further Improvements of the circuit

The circuit can be further improved by adding a complementary PNP power transistor and configuring the circuit as a push-pull power amplifier. In such a case, additional filter or transistor-based pre-amplifiers can be used to compensate with the amplitude voltage needed for the circuit. In addition, an equalizer circuit can also be added for proper BASS, MID and TREBLE performance.