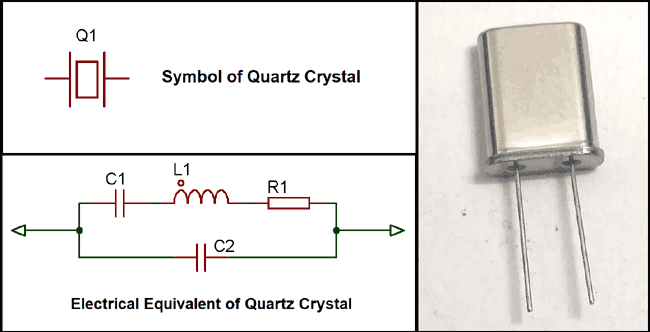 In our previous RC Phase Shift Oscillator and Wein Bridge Oscillator tutorials, we get fair idea about what is an Oscillator. An oscillator is a mechanical or electronic construction which produces oscillation depending on few variables. A proper good oscillator produces stable frequency.

In case of RC (Resistor-Capacitor) or RLC (Resistor-Inductor-Capacitor) Oscillators, they are not good choice where stable and accurate oscillations are needed. The temperature changes affect the load and power supply line which in turn affects the stability of the Oscillator circuit. The stability can be improved to a certain level in case of RC and RLC circuit, but still the improvement is not sufficient in specific cases.

In such situation, the Quartz Crystal is used. Quartz is mineral composed of silicon and Oxygen atoms.  It reacts when a voltage source applied to quartz crystal. It produces a characteristic, identified as Piezo-electric effect. When voltage source is applied across it, it will change shape and produce mechanical forces, and the mechanical forces revert back, and produce electrical charge.

As it convert energy electrical to mechanical and mechanical to electrical it is referred as Transducers. These changes produce very stable vibration, and as a Piezo-electric effect produces the stable oscillations.

Quartz Crystal and its Equivalent Circuit

This is the symbol of Crystal Oscillator. The quartz crystal is made from thin piece of quartz wafer tightly fitted and controlled between two parallel metalized surfaces. The metalized surfaces are made for electrical connections, and the quartz physical size and density also the thickness is tightly controlled as the changes in shape and size directly effect in the oscillation frequency.  Once it is shaped and controlled, the frequency produced is fixed, the fundamental frequency cannot be changed into other frequencies. This specific frequency for the specific crystal is called characteristic frequency.

In the upper image, left circuit represents the equivalent circuit of Quartz Crystal, shown in the right side. As we can see, 4 passive components are used, two capacitor C1 and C2 and one Inductor L1, Resistor R1. C1, L1, R1 is connected in series and the C2 connected in parallel.

If we apply reactance formula across two capacitors, then, for the series capacitor C1, the capacitive reactance will be:-

F = Frequency and C1 = value of the series capacitance.

F = Frequency and C2 = value of the parallel capacitance.

In case of calculating the series impedance and parallel impedance the formulas will be:-

If we see the relationship graph in between Output impedance vs Frequency we will see the changes in impedance. 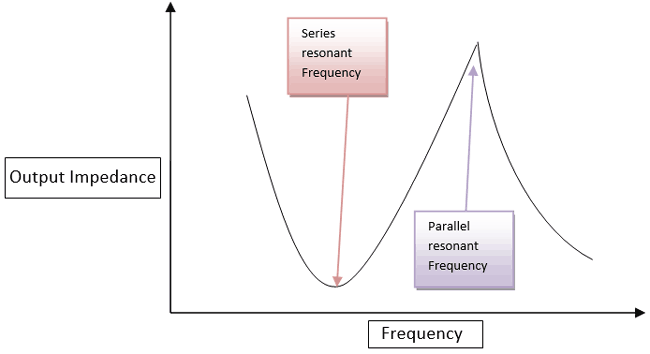 So, at this series resonant frequency point, the following things will happen:-

After reaching the parallel frequency point the impedance slope reaches maximum in value.  The parallel capacitor C2 and the Series Inductor create a LC tank circuit and thus the output impedance became high.

This is how the crystal behaves as inductor or like a capacitor in series and parallel resonance. Crystal can operate in this both resonance frequencies but not at the same time. It is need to be tune at any specific one to operate.

The series Reactance of the circuit can be measured using this formula:-

Where, R is the value of resistance

Xl1 is the series inductance of the circuit

Xc1 is the series capacitance of the circuit.

Parallel capacitive reactance of the circuit will be:-

The parallel reactance of the circuit will be :-

If we see the graph it will look like this:-

As we can see in the upper graph that the series reactance at the point of series resonance is inversely proportional to C1, at the point from fs to fp the crystal act as inductive because at this point, two parallel capacitance become negligible.

On the other hand, the crystal will be at capacitive form when the frequency is outside of the fs and fp points.

Where, XL is inductor Reactance and R is the Resistance.

Series resonant frequency of the crystal is –

The Q factor of this crystal will be- 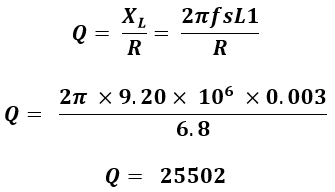 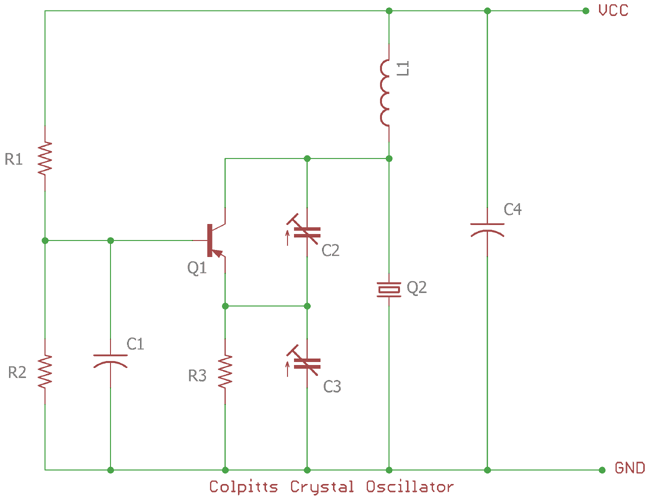 The output amplification is low in this configuration for avoiding excess power dissipation in the crystal.

Another configuration used in quartz crystal oscillator, where the Transistor is changed to a JFET for the amplification where the JFET  is in very high input impedances when the crystal is connected in Drain to Gate using a capacitor. 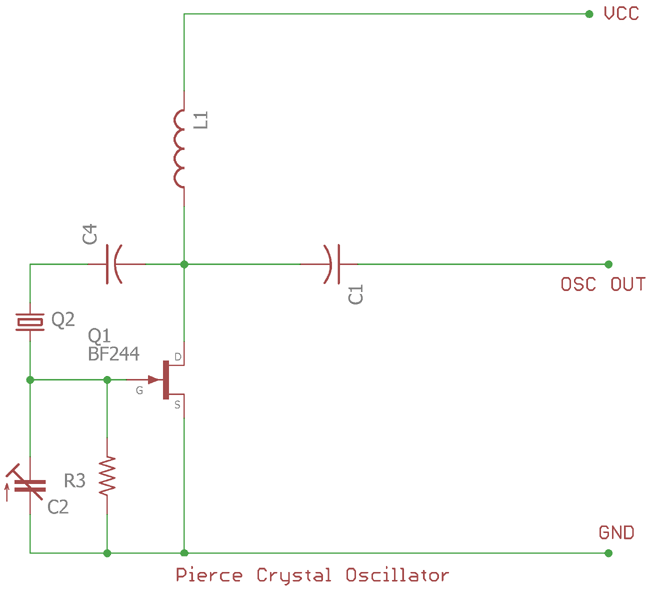 A basic oscillator which use parallel-resonant crystal configuration can be made using CMOS inverter. The CMOS inverter can be used for achieving required amplitude. It consists inverting Schmitt trigger like 4049, 40106 or Transistor-Transistor logic (TTL) chip 74HC19 etc. 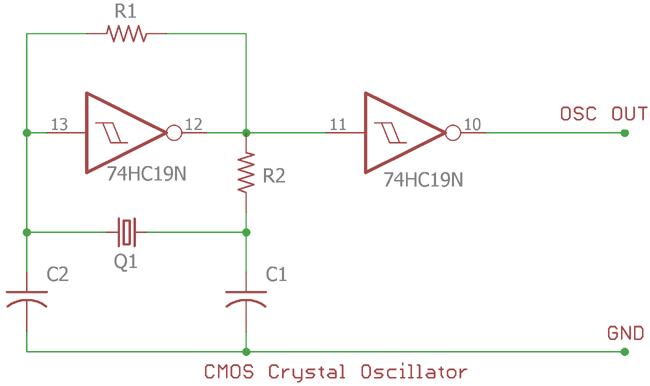 In the upper image 74HC19N used which acting as a Schmitt trigger in inverting configuration. The crystal will provide necessary oscillation in series resonance frequency. R1 is the feedback resistor for the CMOS and provide high Q factor with high gain capabilities. The second 74HC19N is booster to provide sufficient output for the load.

This CMOS crystal oscillator provides square wave output. The maximum output frequency is fixed by the switching characteristic of the CMOS inverter. The output frequency can be changed using the Capacitors value and the Resistor value. C1 and C2 needs to be the same in values.

As various use of quartz crystal oscillator includes Digital watches, Timers etc, it is also a suitable choice for providing stable oscillation clock across microprocessor and CPUs.

Microprocessor and CPU needs stable clock input for operation. Quartz crystal is widely used for these purposes. Quartz crystal provides high accuracy and stability compared to other RC or LC or RLC oscillators.

To achieve this frequency a series crystal used with two same value capacitors network is used across the oscillator input of the respective MCU or CPU. 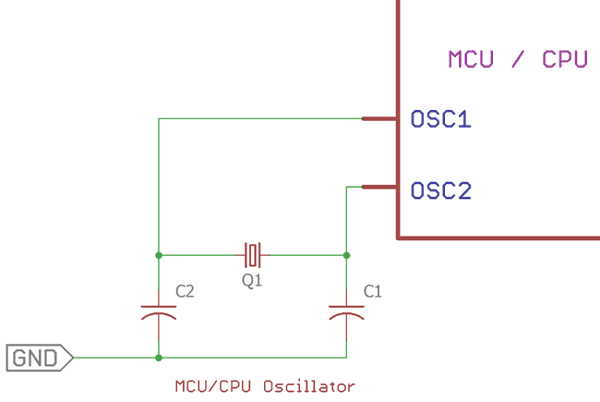 In this image, we can see that a Crystal with two capacitor forms a network and connected across Microcontroller unit or Central processing unit via OSC1 and OSC2 input pin. Generally all microcontroller or processor consist this two pin. In some cases there are two types of OSC pins available. One is for primary oscillator for generating the clock and other for the secondary oscillator which is used for other secondary works where secondary clock frequency is needed. The capacitor value range from 10pF to 42 pF, anything in between but 15pF, 22pF, 33pF is used widely.

I purchased a couple 45mhz clock oscillators over the internet to build a noisey circuit and they have 3 leads to solder to the PCP what lead is what?

Thanks for the explanation,

Thanks for the explanation, really useful

Thank you for the excellent article. Please note that"74HC19N" is not a valid integrated circuit type number. You probabaly meant "74HC14N."