Is spacing an important factor to consider while mounting an Auxiliary Contactor? 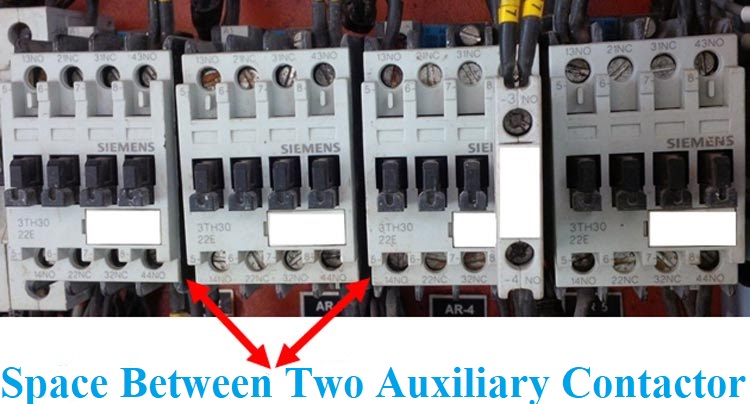 Hello again  Friends, I have been sharing many case studies related to Electrical Maintenance, hope you are enjoying them and they are useful during your plant operations. My motto behind sharing my experience is that the problem faced in one plant should not be repeated to other Plant. That being said. Let’s get into today’s case studies.

Many of you should have seen the position of Auxiliary contactor inside your panel as shown in the below picture. All the below contactors are closely packed without any space between them, but is it the right way of putting it together? Sometimes even the Panel manufacturer might say that nothing is wrong, but as a maintenance engineer, what I have noticed is it will be a problem in the long run. What to know why? Let me explain

Obviously, it is not necessary that all the contactors are ON at the same time and it will never be. But yes 2-3 adjacent contactors can be ON simultaneously. But, can more than two closely spaced auxiliary contactors create a problem just because there is no space between them? Turns out it can and this is how the incident happened in May 2015.

Above auxiliary contactors were placed in one HT Panel which was used to start a Mill (Motor) in a process industry. After 3 years of commissioning of plant one HT panel got tripped. And what we found was that the coil of Auxiliary contactor was burnt and hence it was not picking up and the feedback signal was not going to control room, ultimately tripping the Motor, we replaced it with spare Auxiliary contractor, that’s what we normally do as a maintenance engineer so that the downtime decreases. We tried to find out what could have happened but didn’t get it during the first time, all we understood was that the Auxiliary contactor has heated and failed.

Now, the same problem occurred 2 times again within 4-5 months in other Panel of HT motor and again plant got tripped, reason same as above coil failed and Auxiliary contactor found heated, but this time we have to find the root causes. After checking all the things from loose connections to an earthing fault we didn’t find anything wrong in the wiring. Then we decided to check the temperature of all of such motor, transformer and feeder panels with a Thermal Gun. Yes, there we found some differences. The temperature on the Auxiliary contactor was higher compared to other parts of the control cabinet in the HT panel. And on further analysis, we found that the temperature of 4-5 contactors was on the higher side. We were getting closer, our HOD advised to create some space between all the auxiliary contactors in one HT Motor panel and compare the temperature with those with no space in between.

After two days we found the root cause, the temperature difference on Auxiliary contactors between the two panels was around 5-6 degrees. Actually, the minor heat which was generated when contactor was ON, was not able to dissipate heat properly because there was no space between Auxiliary  contractors, and due to this heat generated by the contactors were accumulated there only due to no space for dissipation and in the long run contactor coil was burning or contactor failing. We rearranged the contactors in the panel as shown in the below picture and the problem did not seem to come back. There could be many reasons for temperature difference in panels.

We checked the same with Other HT panels too and yes temperature on contactors in Panel with some spaces between Auxiliary contactors was on the lower side compared to those with no space between Auxiliary Contactor. The same was implemented across the plant, as per the space available. Also, every plant has its own space problems in HT panels, but what we as a maintenance engineer found out that keeping a small space between Auxiliary contactor is good in the long run. You too can try measuring the heat of the auxiliary contractors on your HT panel with and without space and let us know what you observed. I will be eager to know the results.

Avinash Singh is an Electrical Engineer with over 11 years of rich experience in Electrical Maintenance, Installation, Testing, and Commissioning of all major Electrical equipments. He is specialized in bringing down Energy Cost of a Plant by reducing electricity bills and increasing energy efficiency. He also reduces plant breakdown cost by implementing proper maintenance activities during routine and shutdown. Through these Case Studies he shares his experience and challenges faced in his work routine with the readers of Circuit Digest.