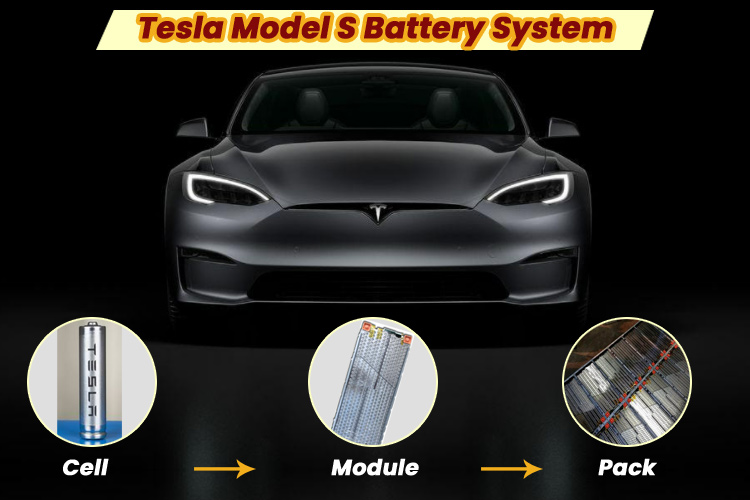 In the field of battery technology, Tesla is one of the renowned automakers and the 2013 Tesla Model S was named the ultimate car of the year by Motor Trend, touting it as the ‘best car of the year’ in its entire publication’s history. Tesla’s Model S is known for its longer range, faster acceleration, and dazzling speed, and the credit goes to the power electronics and the batteries systems.

So, in this article, we will be discussing the Battery system of the Tesla Model-S. We will majorly focus on the battery pack and briefly go through other topics such as Mechanical or thermal specifications. We will be digging deeper into the Electrical features and characteristics, the cell module, efficiency, protection features.

What is an Electric Vehicle’s Battery System?

A battery system in an EV is the main energy storage system and the main constituents of it are cells. The design of an EV battery system requires knowledge and specialization of electrical, mechanical, and thermal engineering apart from material science and other domains. The flow diagram of an EV’s battery system is shown below: 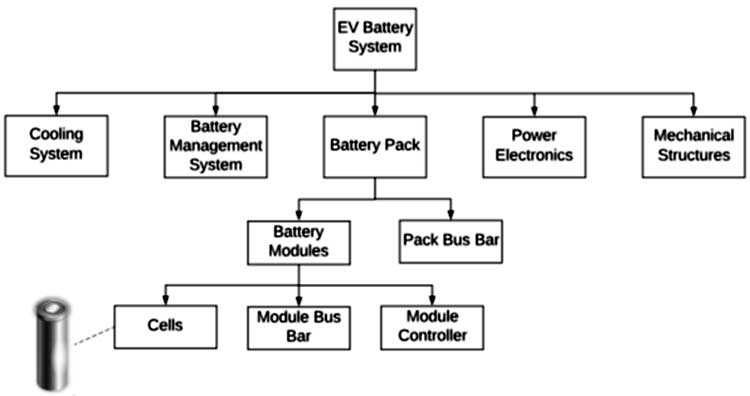 Tesla makes a highly modular battery pack with high efficiency, reliability, and safety features. As explained above, the battery pack is made up of up to 16 modules connected together in a series. The voltage of a Tesla’s battery pack is around 400 Volts and it is the single most heavy component, and all the different versions of the same cars might have a different battery pack, thus changing the weight and capacity of energy storage.

For Eg. the Model S P85’s battery pack has a capacity of 90 kWh and weighs over 530 kgs. It contains 16 modules, which are 7104, 18650 cells. The battery pack has a central bus bar that connects each battery module with a contactor that feeds both the front and rear electric motors. Since each module is 5.5 kWh and we have 16 of those in a 90KWh Tesla battery. Thus making it an 84kWh module.

Battery packs are made up of multiple cells arranged together to form a battery pack. Cells do come in different sizes and shapes and have different internal chemistry. To learn more about Li-ion cells, read our previous articles on the Comparision of EV batteries.

Tesla’s battery pack is made up of multiple battery modules and each module is made up of a combination of Li-Ion cells connected in the arrangement of series and parallel connections to make the module. The below image shows the division of the Battery Pack. 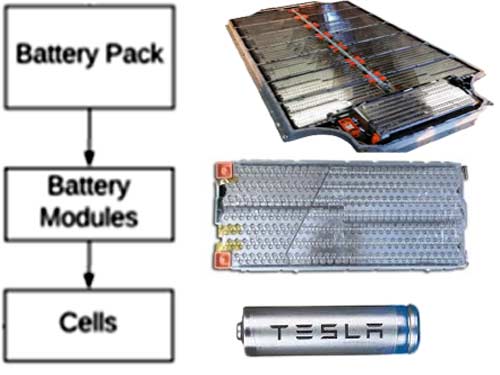 Tesla uses 18650 Li-ion cells manufactured by Panasonic for their Model S and Model X variants of cars. The image below shows a single 18650 cell used in Model-S. 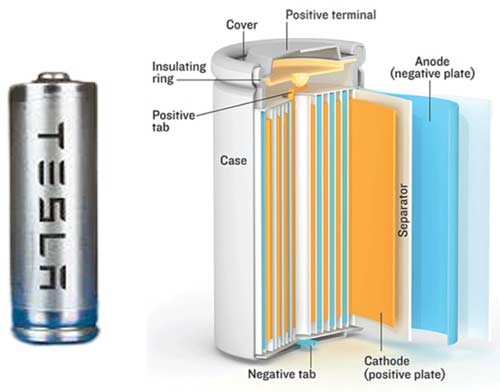 Types of cells used in different Tesla cars are given in the table below:

To learn more about the effect of the size of the cell and its specification, we have previously compared 18650 and 32650 cell.

The cell used in Tesla Model S has been developed by Panasonic by taking input from Tesla, specifically for EV applications. The characteristics of Tesla Model-S cells are given in the table below:

Each module has a 6S 74P configuration, i.e. 6 cells are connected in series and each of these series has 74 cells connected in parallel. Each of Tesla’s modules is rated for 500A of continuous current with 750Amps of peak current. There’s a liquid cooling integrated in order to maintain the temperature of the battery pack. The below image shows a single module of a Tesla Battery Pack. 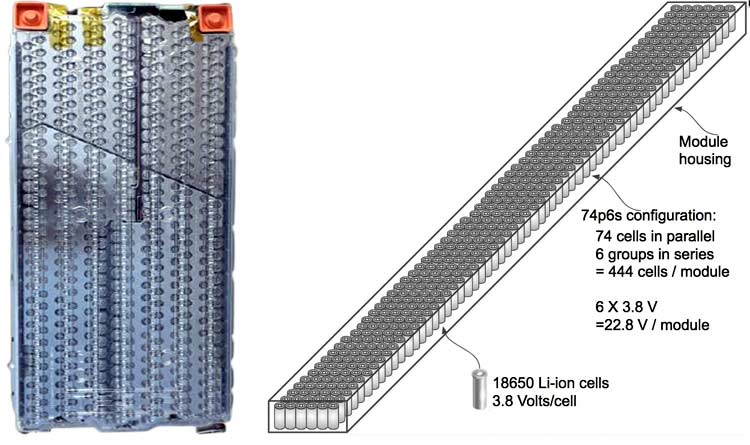 The left image shows the Tesla’s Model S battery module, while the right image shows how the battery is connected in a 6S 74P configuration. The pack has a configuration of 6S 74P and which makes the total number of cells as 444 cells. The total capacity of the battery module is 232 Ah and 5.3 kWh, to see how the series and parallel connection of the cell impacts its capacity and voltage check our previous article, designing a 12V battery pack. Tesla uses a wire bonding technique to connect each cell with the battery pack. The wire also acts as a safety fuse improving the safety of the overall system in case of a cell failure. The red circle in the below image shows how cells are connected using wire bonding. 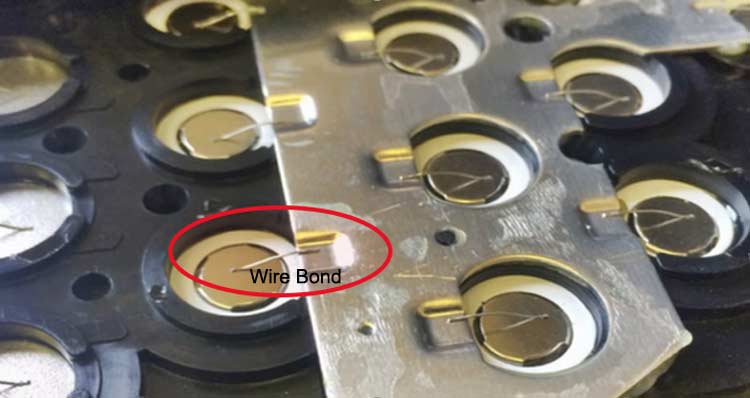 The specification of the battery module is given in the table below: 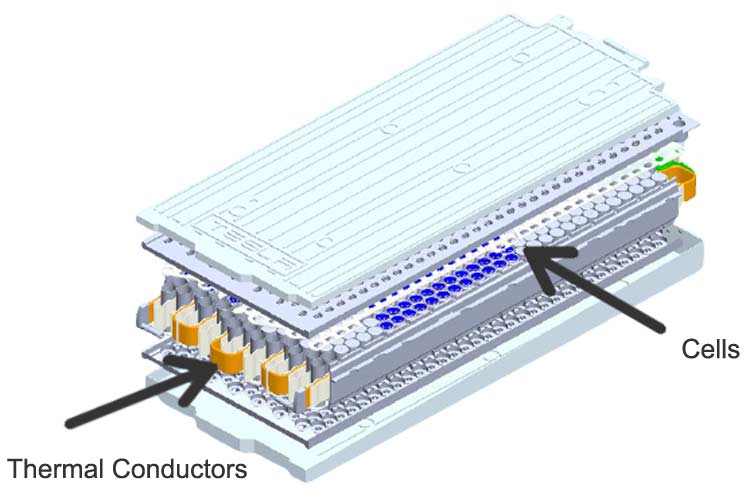 Li-ion cells are prone to heating under load and run the risk of a thermal runaway at high temperatures. The thermal runaway can increase the risk of fire hazards in a cell and subsequently initiate a chain reaction, thus, making the Li-ion battery pack and the EV unsafe to drive. The Thermal Management System is a very prominent safety feature that ensures that the temperature of the battery pack remains under a certain threshold by removing the heat from inside the battery pack. The below image shows the heat exchanger pipe which carries the cooling liquid inside the module. The below and a few other images in this article are taken from a channel named EV Tech Explained. 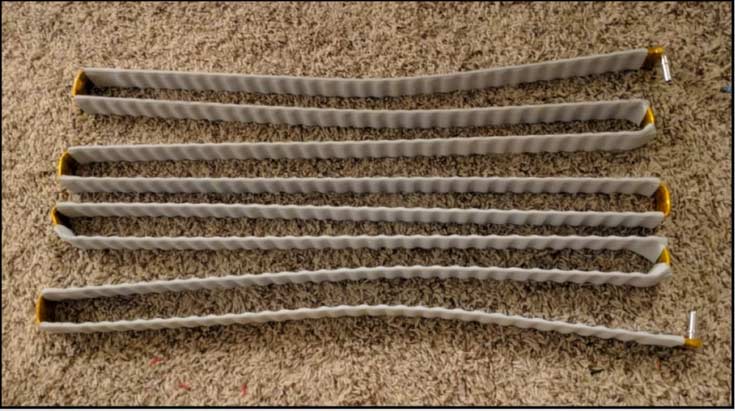 The cooling pipe is covered in thermally conductive and electrically insulative material which moderates the temperature inside the module while also isolating the cells from each other. At the bends, an orange insulating tape is used, this material is called Kapton tape and is used to improve the insulation. The coolant used in a Tesla’s battery pack is a solution of Water and glycol. The image below shows how the temperature of the solution increases as it flows through the battery pack.

The image in the bottom published by AVL shows the temperature at different areas in a battery module after a high completion of a high-intensity test. The blue lines depict the coolant inlet while the red line depicts the coolant output. The maximum and minimum temperature of the cell in each module is also shown below. The test was initiated with an initial temperature of 20°C, and a 250 Amp charge and discharge cycles were performed. 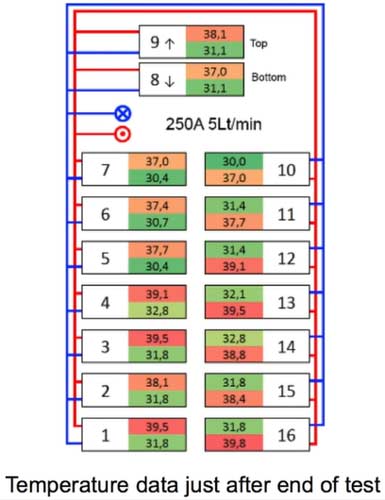 From the above image, it is clear that a low-temperature deviation was found between different modules. Maintaining a similar temperature is also important as it affects the internal resistance of cells and thus affecting the overall characteristics of the battery pack. The pipes containing the water-glycol solution has a patented wavy design, that increases the surface area as well as the packaging efficiency of the pack. The below image is taken from the patent document of the coolant pipe’s wavy design by Tesla.

The battery pack of Tesla model S also acts as a structural member and is placed at the underbelly of the car. It works as a foundation to the vehicle and provides rigidity and strength to the car and due to the positioning of such large weight in the lower part of the vehicle brings down the Center of Gravity of the car lower, thus increasing the balance and stability of the vehicle. The below image taken from the EV Tech Explained shows the structure of the empty battery pack.

A total of 16 batteries can fit inside the base. Each niche accommodates a single battery module. The longitudinal members strengthen the chassis and provide resistance against longitudinal impact and side bending while the strength for the side is provided with the thick side members as they also provide protection against side impact. The internal members are used for making a grid for module placement but they also increase the strength and physical stiffness of the base while also isolating modules from each other in case of fires. The below image shows the placement of all 16 modules. On the right, the graphical illustration shows how the modules are connected with each other.

Battery Management Systems (BMS) is the most important component in a battery pack essential for the battery pack’s safety. The BMS is based around a Texas Instruments IC capable of monitoring overcharge, over-discharge, SOC, SOD, temperature, etc of a battery pack. We have previously covered the importance of BMS. The picture of the Tesla Model-S BMS is shown below.

The BMS used by Tesla in Model-S is based around Texas Instrument’s bq76PL536A-Q1 3-to-6 Series -Cell Lithium-Ion Battery Monitor and Secondary Protection. The BMS is integrated into every module and monitors the battery life, temperature, and charge-discharge cycle of cells. It is a stackable Battery Monitoring System and uses a High-Speed Serial Peripheral Interface (SPI) for Data Communications. The image below shows a simplified system connection of the BMS. 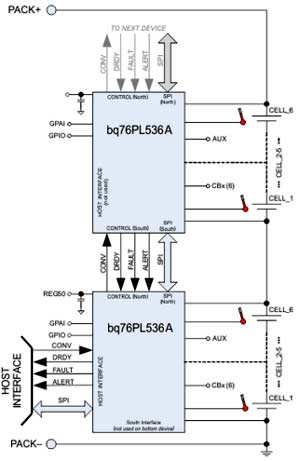 The BMS can communicate with each other using SPI communication. All the module’s BMS act as a slave BMS and communicate with a master BMS via an isolation barrier, the master BMS communicates with the ECU and charger and controls the main contactors. The BMS is placed on a side of every battery module. The cell voltage measurement is performed using wires welded to the connecting plates of the parallel connections. Not much data is available about the BMS module used in Tesla Model S, hence few calculated assumptions are taken about the BMS technology. 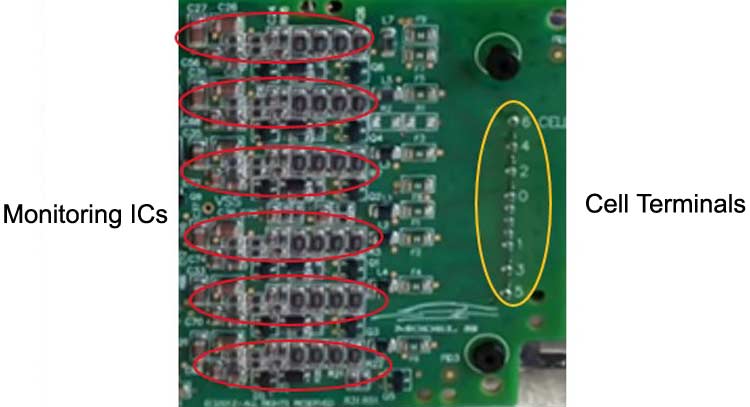 The red encircled area in the above picture of BMS shows that the BMS contains 6 monitoring ICs for each series connection in the module. The yellow encircled area shows the terminals where the connection from the 6 cells will be connected. The IC by TI used in the BMS can be daisy-chained in order to need only one communication connection to the system. And probably the master BMS used is developed by BOSCH, the whole system utilizes CAN bus communication to communicate with the vehicle’s central computer. If you have any extra information kindly feel free to post it so that we can update it.

The Tesla Model-S indeed has a great battery pack, the efforts, and engineering dedicated during the designing and development of the battery pack are simply mind-boggling. Everything from the choice of the cell, to the design of modules and battery pack, is given due attention. The idea of using the battery pack as a structural material was a technical nightmare, but the great mechanical design made it quite safe and brought down the center of gravity of the whole vehicle close to the ground, thus increasing the stability and maneuverability of the vehicle. The cells used in the battery pack are one of the best available in the market, hence is the demand for the second life use of Tesla’s battery modules and cells. The information disclosed by Tesla and details available over the internet made it difficult to verify the information. So, if have any more details or happen to find any misinformation in this article, please feel free to comment below so that we can make this article more useful.