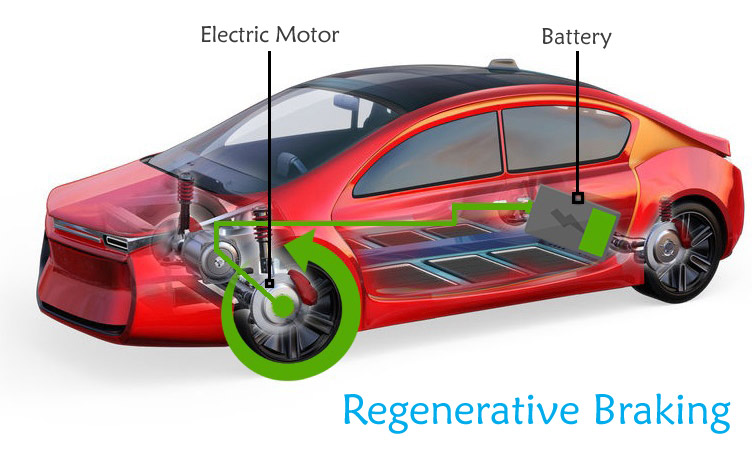 Braking is one of the important aspects of a vehicle. The mechanical braking system which we use in our vehicles has a big drawback of wasting the kinetic energy of the vehicle as heat. This brings down the overall efficiency of the vehicle by affecting the fuel economy. In the urban drive cycle, we tend to start and stop the vehicle more often when compared to highway drive cycle. As we apply the brake often in an urban drive cycle, the energy loss is more. Engineers came up with the regenerative braking system to recover the kinetic energy dissipated as heat during braking in the traditional braking method. Going by the laws of physics, we cannot recover all of the kinetic energy that is lost but still significant amount of kinetic energy can be converted and stored in battery or Supercapacitor. The energy recovered helps in improving the fuel economy in conventional vehicles and helps in extending the range in electric vehicles. It is to note that the process of regenerative braking has losses while recovering the kinetic energy. Before going any further you can also check other interesting article on EVs:

The concept of regenerative braking can be implemented in conventional vehicles using Fly wheels. Flywheels are disks with high inertia which rotate at a very high speed. They act as a mechanical energy storage device by taking up (storing) the kinetic energy of the vehicle during braking. The energy recovered during braking process can be used to assist the vehicle during starting or up-hill movement.

In electric vehicles, we can incorporate the regenerative braking in a much more efficient way electronically. This will reduce the need for heavy flywheels, which adds extra weight to the total weight of the vehicle. Electric vehicles have an inherent problem of range anxiety among users. Though the average speed of the vehicle in the urban drive cycle is around 25-40 kmph, the frequent acceleration and braking drain the battery soon. We know that motors can act as a generator under certain conditions. By using this feature, one can prevent the kinetic energy of the vehicle from getting wasted. When we apply the brake in electric vehicles, the motor controller (based the brake pedal sensor output) reduces the performance or stops the motor. During this operation, the motor controller is designed to recover the kinetic energy and store it in the battery or the capacitor banks. Regenerative braking helps in extending the range of the electric vehicle by 8-25%. Apart from saving energy and enhancing the range, it also helps in effective control of the braking operation.

In the mechanical braking system, a reverse torque is exerted on the wheel when we press the brake pedal. Similarly, in the regenerative braking mode, the speed of the vehicle is reduced by initiating a negative torque (opposing to the motion) in the motor with the help of the motor controller. Sometimes people get confused when they visualize the concept that motor acts as a generator when it rotates in reverse direction under regenerative braking mode. In this article, one can understand how to recover the kinetic energy via regenerative braking method in electric vehicles.

How a Motor acts as Generator

First, we will focus on understanding how a motor can act as a generator. We all have used the Permanent Magnet DC motor in robotics applications like line follower. When the wheel of the robot connected to the motor is rotated freely (externally by hand), sometimes the motor driver IC gets damaged. This happens because the motor acts as a generator, and the back EMF generated (reverse voltage of greater magnitude) is applied across the driver IC, which damages it. When we rotate the armature in these motors, it cuts the flux from the permanent magnets. As a result of this, EMF is induced to oppose the change in flux. Therefore, we can measure a voltage at the terminals of the motor. It is because the back EMF is a function of rotor speed (rpm). When the rpm is more and if the back emf generated is more than the supply voltage, then the motor acts as a generator. Let us now see how this principle works in electric vehicles to avoid energy loss due to braking.

When the motor accelerates the vehicle, the kinetic energy associated with it increases as a square of the velocity. During coasting, the vehicle comes to rest when the kinetic energy becomes zero. When we apply the brakes in an electric vehicle, the motor controller operates in such a way to bring the motor to rest or to reduce its speed. This involves in reversing the direction of the motor torque to that of the direction of rotation. During this process, the rotor of the motor connected to the drive axle generates an EMF in the motor (analogous to a prime mover/turbine driving the rotor of the generator). When the EMF generated is more than the voltage of the capacitor bank, the power flows from the motor to the bank. Thus the energy recovered is stored in the battery or the capacitor bank. 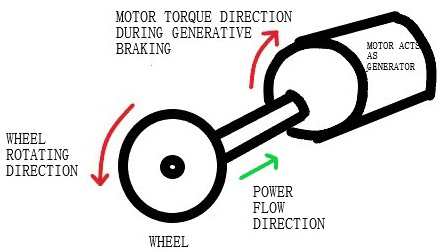 Let us assume that the motor is rotating at 5900 rpm and the supply frequency be 200 Hz when we apply brake we have to reduce the rpm or bring it down to zero. The controller acts according to the input from the brake pedal sensor and carries out that operation. During this process, the controller will set the supply frequency less than the 200 Hz like 80 Hz. Therefore the synchronous speed of the motor becomes 2400 rpm. From the motor controller perspective, the speed of the motor is more than its synchronous speed. As we are reducing the speed during braking operation, the motor now acts as a generator until the rpm decreases to 2400. During this period, we can extract power from the motor and store it in the battery or capacitor bank. It is to note that the battery continues to supply power to the three phase induction motors during the regenerative braking process. It is because the induction motors do not have a magnetic flux source when the supply is OFF. Therefore the motor when acts as a generator draw reactive power from the supply to establish the flux linkage and supplies active power back to it. For different motors, the principle of recovering the kinetic energy during regenerative braking is different. Permanent magnet motors can act as a generator without any power supply because it has magnets in the rotor to produce magnetic flux. Similarly few motors have residual magnetism in it which eliminates the external excitation required to create magnetic flux.

In most of the electric vehicles, the electric motor is connected only to the single drive axle (mostly to the rear-wheel drive axle). In this case, we need to employ a mechanical braking system (hydraulic braking) for the front wheels. This means that the controller has to maintain coordination between both the mechanical and electronic braking system while applying the brakes.

Is Regenerative Braking worth to be implemented in all Electric Vehicles?

There is no doubt in energy recapturing potential in the concept of the regenerative braking method, but it has some limitations too. As pointed before, the rate at which the batteries can charge is slow when compared to the rate at which it can discharge. This limits the amount of recovered energy that the batteries can store during sudden braking (fast deceleration). It not advisable to use regenerative braking under fully charged conditions. It is because overcharging can damage the batteries, but the electronic circuit prevents from overcharging of it. In this case, the capacitor bank can store the energy and help in extending the range. If it is not there, then the mechanical brakes are applied to stop the vehicle.

We know that the kinetic energy is given by 0.5*m*v2. The amount of energy that we can retrieve depends on the mass of the vehicle and also the speed at which it is travelling. The total mass is more in heavy vehicles like electric cars, electric buses, and trucks. In the urban drive cycle, these heavy vehicles would gain large momentum after acceleration despite cruising at low speed. So during braking, the kinetic energy available is more when compared to an electric scooter travelling at the same speed. Therefore, the effectiveness of the regenerative braking is more in electric cars, buses, and other heavy vehicles. Though few electric scooters have the feature of regenerative braking, the impact of it on the system (the amount of energy retrieved, or the range extended) is not as effective as in electric cars.

The Need for Capacitor Banks or Ultra Capacitors

During braking, we need to stop or reduce the speed of the vehicle instantaneously. Therefore the braking operation at that instant is there for a short time. Batteries have a limit on the charging time we cannot dump more energy at a time because it will degrade the batteries. Apart from this, frequent charging and discharging of the battery also brings down the life of the battery. To avoid these, we add a capacitor bank or ultra-capacitors to the system. Ultra capacitors or Super Capacitors can discharge and charge for many cycles without any performance degradation, which helps in increasing the life of the battery. Ultra capacitor has fast response, which helps in capturing the energy peaks/surge effectively during the regenerative braking operation. The reason for choosing an ultra capacitor is that it can store 20 times more energy than electrolytic capacitors. This system houses a DC to DC converter. During acceleration, the boost operation allows the capacitor to discharge up to a threshold value. During deceleration (i.e. braking) the buck operation allows the capacitor to charge. The ultra capacitors have a good transient response, which is useful during starting of the vehicle. By storing the recovered energy apart from the battery, it can help in extending the range of the vehicle and can also support sudden acceleration with the help of the boost circuit.