Can India Meet the Target of Installing EV Charging Stations by 2027? 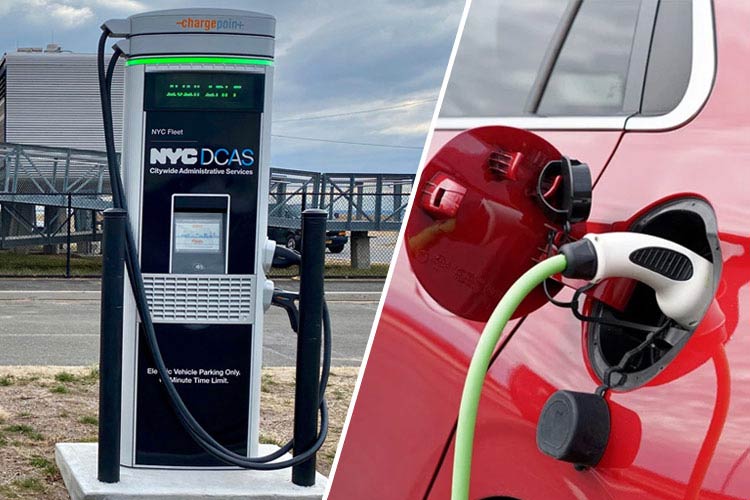 Globally, India is now one of the top ten markets for automobiles and there is huge potential for buying cars with the escalating middle-class citizens. In Spite of huge potentials, the market is a bit stagnant because in the last two years, petrol prices have augmented by 50 percent approx in thirteen different steps. Now, here is the requirement for alternative technologies in cars like electric vehicles in India. When compared to the traditional combustion engine vehicles, the investment was only around 1.5 times, but now the cost of the environment is of more importance than the price of a vehicle. In order to boost electric vehicles in the country, the government and carmakers have unleashed several initiatives and incentives to reduce the cost of the vehicle, but the major concern is the lack of awareness of technology among consumers and most importantly, the challenges of installing sufficient charging stations. Unlike petrol and diesel stations, charging stations for electric vehicles are very marginal. For instance, two wheelers are now having detachable batteries, but what about four-wheelers? According to automobile experts, the number of electric vehicle launches is more than that of charging stations and there is no proper planning and schemes regarding setting up charging infrastructure.

Electric vehicles’ commercial triumph requires a proper enhancement of a charging infrastructure, which is seamless, easily accessible, and fairly low-priced. The point to be noted is that lots of new technologies are now available and many more are on the waiting list, but there is no availability of a proper concord or an agreement on what basis an effective infrastructure will look like in the coming twenty-five years. According to the world electric vehicle association, with time, technologies improve, but in terms of electric vehicles, there were much fewer uncertainties before 2019, when BEV batteries were much smaller in size, and the charging cost was fairly moderate. A 24kWh Nissan Leaf could recharge half of the battery overnight by plugging it into an ordinary “Level 1” 1.4 kW residential outlet in the evening and by unplugging it the the next day and it requires no additional capital outlay, and the electricity would cost approximately $60 per month, assuming the vehicle was charged every day. With an expenditure of $1,500-$2,200, a heavy user can install a “Level 2” 220-volt (6.6 kW) system, which is just six and half hours to completely recharge their leaf.

The Indian and Global Scenario

The largest sales in EVs in India for the past four years were mostly dominated by the three wheeler segment, which is e-rickshaws, the most economical option for connectivity and the second highest sales are from the low speed two wheeler segment. With the escalation of FAME incentives in the segment, the high-speed two wheelers are now throwing tough competition to ICE two-wheelers. Since last year, the four-wheeler started showing a positive growth curve in sales with Tata Nexon EV.s 1000 units were sold back in August 2021.

Now, when it comes to the charging infrastructure, India mostly has Plug-in charging stations and battery swapping. The former caters to the requirements of all electric vehicles, while the later caters to two wheeler and three-wheeler segments. As of 30th June 2020, the country has now 927 public charging stations, as per Central Electricity Authority, which is very insufficient when compared to volumes of vehicles launched. Under FAME scheme II, five states such as Madhya Pradesh, Gujarat, Maharashtra, Tamil Nadu, and Andhra Pradesh have been given 48 percent of overall charging stations. To boost the growth of the segment, the Ministry of Power back in 2019 has proclaimed to set up public and permitted private charging stations at offices and residential complexes, and the task to set up the stations is now spearheaded by the public sector undertakings in the country.

Now, globally at a CAGR of 46.6 percent, the market volume of international electric vehicle charging stations is speculated to grow from 2,115 thousand units in 2020 to 30,758 thousand units by 2027, according to MarketsandMarkets. The escalating investment schemes by various governments throughout the world to perk-up charging infrastructures would provide immense advantages for OEMs to swell their geographical presence and revenues.

According to experts at Counterpoint, Kanagawa Prefecture in Japan is the most dominated electric vehicle region with 2,183 EVs, while Los Angeles is the second most important city in terms of this segment. In Europe, Rotterdam is one of the most successfully sold electric car cities with approximately 11,00 electric vehicles on the road. This city in the Netherlands is also considered to be the fulcrum of electric vehicles with 532 per EVs for every 1,00,000 registered vehicles. Now, when it comes to the most installed charging stations countries, European Union countries are leading the race in terms of building the entire EV ecosystem. 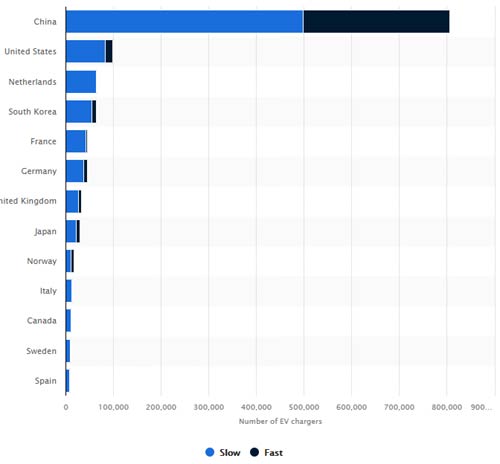 The Major Challenges of Installing Charging Stations in India

Although India is one of the fastest-growing automobile markets in the world, it accounts only 0.5 percent in the international market of electric cars. As the annual sales of the segment are speculated to hit 63 Lakh units towards the end of 2027, the country requires approximately 4 lakhs charging stations that can power 20 lakhs EVs together. By the end of 2030, experts at MarketWatch claim that 29 lakh charging stations are extremely required and out of this, 21 lakh would be of low capacity.

The point is why is it so difficult to meet the target of installing the charging stations? First of all, for public charging places, the basic choice is AC001 and DC001 chargers, but most of the 4W, 3W, and 2W cars do not use them. Then, the grid development is devoid of any support that can cater to the problem of escalated load. There are additional challenges with discom infrastructure, voltage fluctuation, no sign of net metering, and heavy power outages. Because of the limited usages of charges, there is a problem in ample cashflow and investments. The power analysts on the other hand highlighted that the augmented use of EVs will further increase the demand for electricity to 100TWh. Another important challenge is insufficient land and the high cost of renewable energy means charging the cars on already overstretched coal-based electricity.

Jeetender Sharma, managing director at Okinawa Scooters refuted the statement above and told CircuitDigest, a vast volume of charging stations will serve two important purposes like it will fetch the importance and awareness of EVs among people, which will be also beneficial for the large electric cars. India’s geography is very large and hence it will take several years to install multiple charging stations, both high-speed and low-speed. More than charging stations we will have to look for detachable batteries even for large four-wheelers or like mobile chargers that can be charged anywhere. Once the customers are educated about these issues they will not worry about charging. More investments and technological advancements must be looked for in this segment.

Another major problem is the usage of traditional 120 volts plus that is mostly used for household appliances. It charges extremely slowly, which is about 20-40 hours, whereas the 240-volt level two chargers offer charge for 20-25 miles in an hour. The vehicles must be charged at all electrical outlets so that it can run smoothly. The problem is parking garages are most devoid of any charging stations and the installations are extremely expensive.

The development of charging infrastructures requires swiftness that can boost people’s confidence to go for electric cars for personal use. To meet the same, the government and PSUs have already commenced their ventures to meet the charging station target by the end of 2027.