Internet connectivity has become necessary nowadays as almost every electronic device needs an active internet connection to work properly. Although most of the devices have Wi-Fi connectivity options, but many devices and network routers still used Ethernet ports and cables to connect with the wired internet line. We previously learned about how data can be transferred over power lines in Power Line Communication article, today we will learn the How power can be transferred over data lines that are PoE (Power over Ethernet).

What is PoE (Power over Ethernet)?

As the name suggests, providing electric power through Ethernet cables is called PoE.

We all know that Ethernet cables are used for data transfer and network connectivity but do you know that most of the time we do not use all the connecting lines present in the Ethernet cable. For example, consider the Ethernet cable shown in the figure below, it has 8 lines but among them, only four lines are commonly used for data exchange (Orange, Orange-white, Green &Green-white) while remaining four lines remain idle. So the data exchange is possible even after we strip these idle lines at both ends, which is why in low-end Ethernet cable there are only four lines instead of eight lines. So the idle four lines can be used for power transfer. This simple setup of using idle lines to deliver power to the load is called Power over Ethernet.

Now let us look at the simple circuit for better understanding the PoE. In this circuit, four wires are stripped away (Blue, Blue-White, Brown & Brown-White namely) from the jack on each end of the cable. As said earlier this pair of brown and green wire is not used in low-speed Ethernet applications so stripping them of the jack will not cause any interruption to the communications. So one end should be connected to the power supply and other to the load, so to set an example we are using a battery as a power source and camera as a load. With source & load in the closed-loop, the circuit below is completed and the camera will show response. Since using this simple setup we delivered the power to a simple appliance through Ethernet cable we can say PoE is achieved.

How Power over Ethernet works and why it is used

The main reason to use PoE over the conventional power supply system is to reduce the cost of providing power supply to each peripheral that connects to the network. For example, if you have 10 spy cameras distributed across the entire building, in that case, it needs 10 power supply units to provide power to them and that is not the main problem. The main problem is wiring 220 power lines near each peripheral which is not practical, so using PoE is the best option for connecting all peripherals to the central system.

Now striping Ethernet cable, for connecting each peripheral to the central system, is itself a tedious task, so for that PoE injector and PoE splitter are used.

As shown in the figure, by using PoE Injector and PoE Splitter we can skip all the hassle of identifying the colors, wire stripping, soldering and dressing the loose ends. Now let us look at the function of these devices and how they can be used. 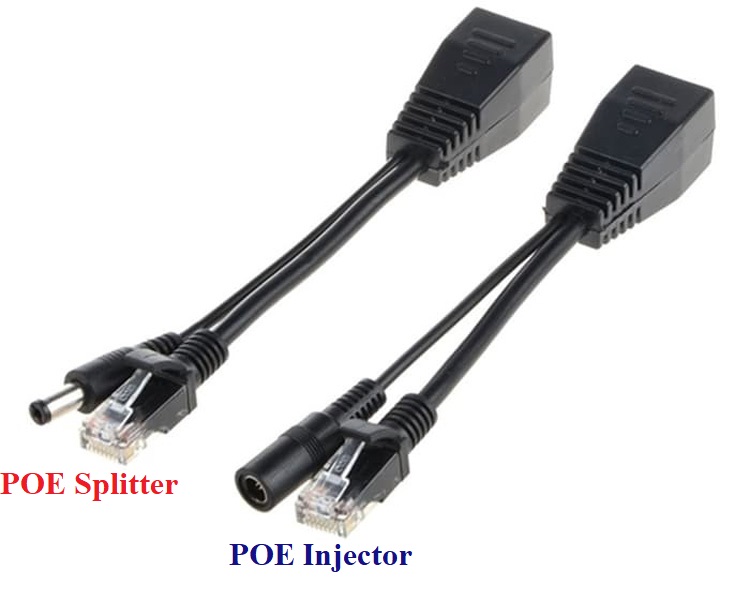 On Input we have: Normal Ethernet connection + DC power supply

On output, we have: PoE Ethernet (Which can be used for connecting PoE devices)

So the PoE injector function is providing PoE Ethernet by taking in normal Ethernet connection and DC power supply.

This device has one input port and two output ports. The input is for connecting PoE Ethernet cable while the output ports provide normal Ethernet & DC power.

On Input we have: PoE Ethernet

On output we have: Normal Ethernet connection + DC power supply

So the function of PoE splitter is quite the opposite of PoE Injector which is to split the PoE Ethernet connection into normal Ethernet and usable DC power supply.

A PoE Extender is used when there is a network span over large distances such as shopping malls, hotels, restaurants, office buildings, businesses, academic campuses, and sporting venues. In those places normal 100meters Ethernet connections can’t be of used and this is when PoE Extender comes to play. This device can be used to extend Ethernet network devices beyond the basic 100m distance limit making it a viable option for many cases.

These days’ peripheral devices support PoE Ethernet so we can skip the splitter and directly connect the cable to the device as shown in the figure. 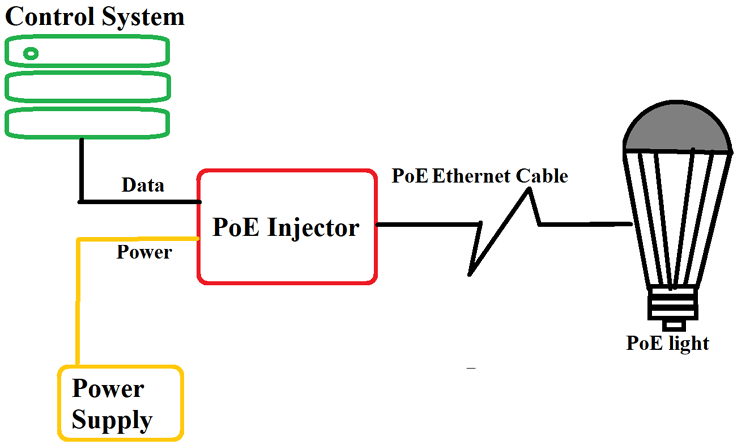 PoE hub functioning is similar to PoE injector except it takes in many Ethernet connections while providing that many PoE Ethernet outputs. The hub is best used if you have many PoE devices on one end and normal Ethernet connectivity providing a server on the other. The working of the hub can be easily understood from the below block diagram. 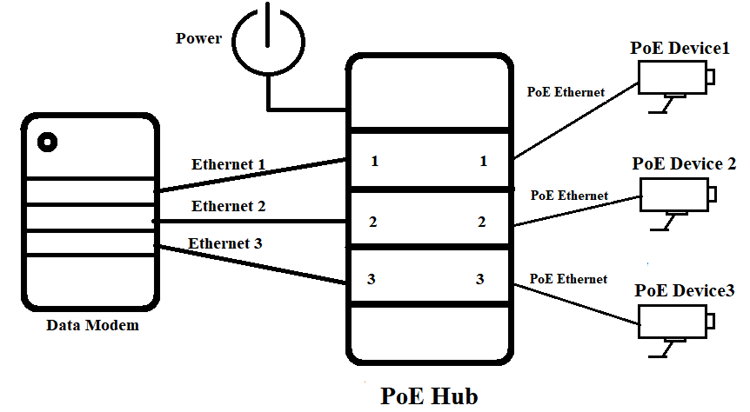 Till now we assumed there are free lines available in the Ethernet cable which can be used for PoE without much difficulty.

Now you might ask, what about the cases in which all the lines in Ethernet cables are used? Well, this case is not a rare one as high-speed internet and data transfer systems do use all the data lines. Even in those cases, PoE is still achievable but it becomes complex when compared to the previous configuration.

In the case of a high-speed transmission system, both data & power are sent through the same lines but special devices are used for that. This special unit is PoE switch which adds to cost unlike before where we can simply strip the unused lines at both ends and use it for our convenience.

A PoE switch is a network switch with the ability to provide power over Ethernet from each interface while still being able to forward frames. Simply put, it works like a port for connecting multiple PoE devices to a single PC.

In the block diagram, you can see how multiple PoE devices are connected to the PoE switch with Ethernet cables and the PC communicates with these devices through the PoE switch. A PoE switch requires one Uplink to an existing network to further expand and increase ports. 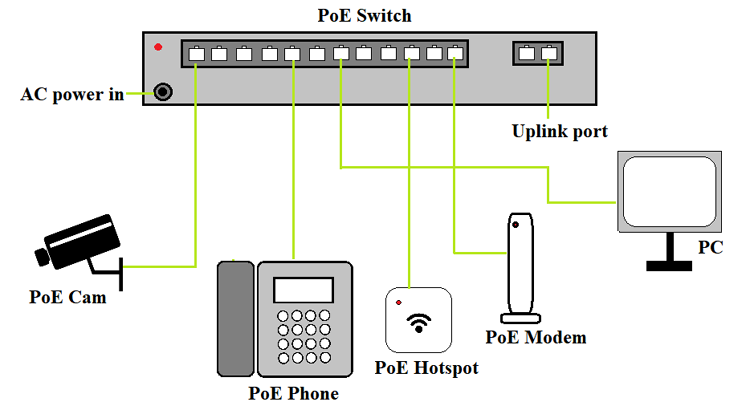 You can look into this table and choose the appropriate PoE Switch, Injector or Router for your PoE devices.

Although everything looks green here but that is not the case. There are many drawbacks for PoE and a couple of them are discussed below.