This tutorial is about Passive Low Pass Filter, a widely used term in Electronics. You will hear or use this ‘technical’ term almost every time in your studies or in your professional career. Let’s explore what is special about this technical term.

“Passive”- In dictionary it means allowing or accepting what happens or what other’s do, without active response.

“Low Pass Filter”- that means passing what is low, that is also means blocking what is high. It is act as same as the traditional water filter which we have in our home/office which block impurities and only pass the clean water.

There are many things associated with a Low pass filter. As it was described before that it will filter out unwanted things (signal) of a sinusoidal signal (AC).

Low pass filters are made using resistor and capacitor combination (RC) for filtering out up to 100Khz but for the rest 100khz-300khz Resistor, Capacitor and Inductor is used (RLC).

Here is the circuit in this image: 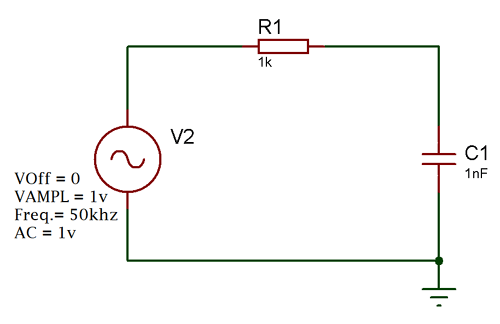 This is a RC filter. Generally an input signal is applied to this series combination of resistor and non-polarized capacitor. It is a first order filter as there is only one reactive component in the circuitry that is capacitor. The filtered output will be available across capacitor.

What actually is happen inside the circuitry is quite interesting.

In higher frequencies exact opposite thing will happen. Resistor’s resistive value gets higher and due to that with the effect of capacitor’s reactance the voltage across capacitor became smaller.

Here is the curve how it’s look alike at the output of the capacitor:-

fc is the cutoff frequency of the filter. The signal line from 0dB/118Hz to 100 KHz it is flat almost.

The formula of Calculating gain is

If we put those values we will see the result of gain till the cut-off frequency is almost 1.  1 unit of gain or 1x gain is called as unity gain.

After the cut-off signal the response of the circuit gradually decrease to 0(Zero) and this decrement happens at a rate of -20dB/Decade. If we calculate the decrease per octave it will be -6dB. In technical terminology it is called “roll-off”.

At low frequencies capacitor’s high reactance stops the flowing of current through the capacitor.

If we apply high frequencies above the cut-off limit, the capacitor reactance decrease proportionally when signal frequency increase, resulting lower reactance the output will be 0 as the effect of short-circuit condition across capacitor.

This is the low pass filter. By selecting proper resistor and proper capacitor we could stop frequency, limit signal without affecting the signal as there is no active response.

In the above image there is a word Bandwidth. It’s signifying to which the unity gain will applied and signal will be blocked. So if it is a 150 Khz low pass filter then the bandwidth will be 150Khz. After that bandwidth frequency the signal will attenuate and stop from passing through the circuitry.

Also there is -3dB, it’s an important thing, at the cut-off frequency we will get -3dB gain where the signal attenuated to 70.7% and the capacitive reactance and resistance is equal R= Xc.

What is the formula of Cut-off Frequency?

So, R is resistance and C is capacitance. If we put the value we will know the cutoff frequency.

Let’s see the first image the circuitry where 1 resistor and one capacitor are used to form a low pass filter or RC circuit.

When DC signal applied across the circuit it’s resistance of the circuit which creates drop when current is flowing, but in case of an AC signal it’s impedance, which measured in Ohms too.

First resistive opposition is capacitive reactance, the formula is:-

The output of the formula will be in Ohms, as Ohms is the unit of capacitive reactance, because it is an opposition means Resistance.

The Second opposition is the resistor itself. Value of resistor is also a resistance.

So, combining this two opposition we will get the total resistance, which is impedance in RC (AC signal input) circuit.

The output voltage of this divider is as follows=

R1 + R2 are the total resistance of the circuit and this is the same as impedance.

So, combining this total equation we will get

By, solving the above formula we get the final one:-

As we already know what actually happening inside the circuit and How to find out the value. Let’s choose practical values.

Let’s pick up most common value in resistor and capacitor, 4.7k and 47nF. We selected the value as it is widely available and it is easier to calculate. Let’s see what will be the cut-off frequency and Output voltage.

Cut off Frequency will be:-

By solving this equation the cut-off frequency is 720Hz.

Let’s where it is true or not… 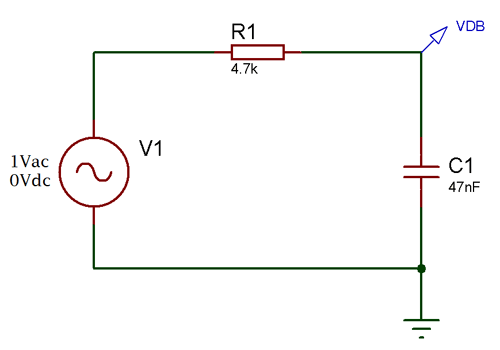 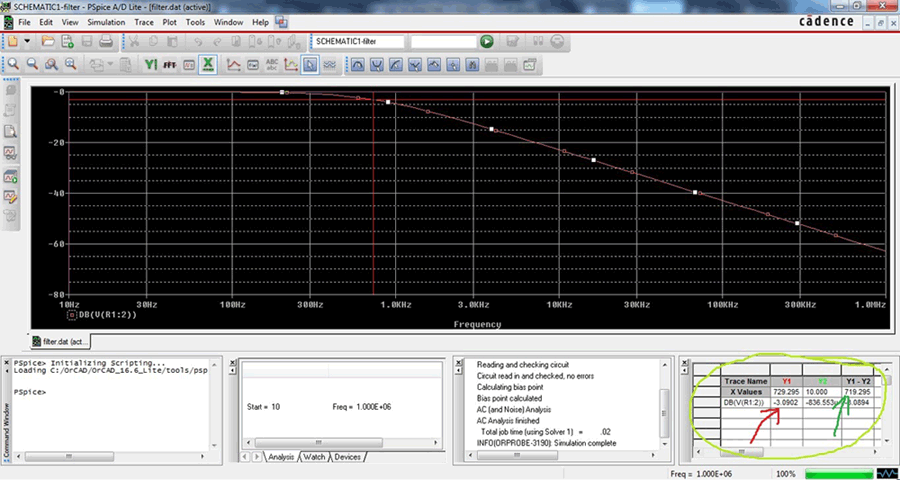 As you can see the Frequency response (Also called as Bode Plot) we set the cursor at -3dB (Red Arrow) and get 720Hz(Green Arrow) corner or Bandwidth Frequency.

If we apply 500Hz signal then the capacitive reactance will be

out of phase at -3dB or Cut-Off frequency.

When the input voltage changes the charge time of the capacitor and due to that scenario output voltage lags behind that of the input signal or sinusoidal.

The relationship as follows:-
Input frequency increase = out of phase margin increase. This entire two are proportional to each other.

The formula of Phase shift is

Let’s see the phase shift of the circuit

This is the phase shift curve. We set the cursor at -45

(Red Arrow) and get the result of the cut-off frequency 720Hz (Green Arrow).

Sometimes we need to know the cut-off frequency when we have the time constant value in such case altering the formula we can easily get that:-

Due to this Time constant RC filter produce saw tooth wave, triangular wave if we change the input signal from sine wave to square wave. This is called as Integrator circuit.

When a two first order low pass RC stage circuit cascaded together it is called as second order filter as there are two RC stage networks.

Here is the circuit:- 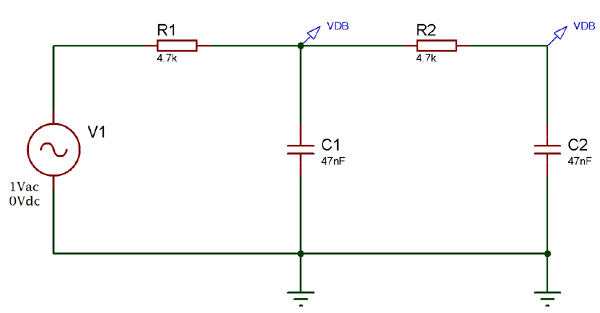 Here is the response curve:-

The cursor showing -3dB cut-off point in Green signal which is across the first order (R1 C1), the slope at this was seen previously -20dB/ Decade and the red one at the final output which has a slope of -40dB/Decade.

This will calculate the gain of the second-order low pass circuit.

In practical the roll-off slope increase as per adding filter stage, the -3dB point and the pass band frequency changes from its actual calculated value above by a determined amount.

This determined amount is calculated by the following equation:-

It’s not so good to cascade two passive filters as dynamic impedance of each filter order effects other network in same circuitry.