An Overview of Dual Converters 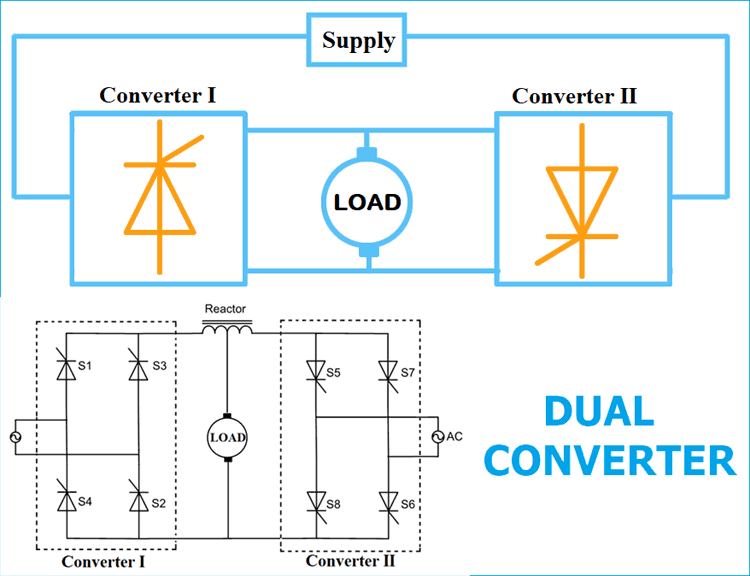 In the previous tutorial we have seen how a Dual Power Supply Circuit is designed, now we learn about Dual Converters, which can convert AC to DC and DC to AC at the same time. As the name suggests Dual Converter has two converters, one converter works a rectifier (Converts AC to DC) and other converter works as an inverter (converts DC into AC). Both converters are connected back to back with a common load as shown in above picture. To learn more about Rectifier and Inverter, follow the links.

Why we use the dual converter? If only one converter can supply the load, then why we use two converters? These questions may arise and you will get the answer in this article.

Generally, dual converters are used for the reversible DC drives or variable speed DC drives. It is used for high-power applications.

Second quadrant: voltage is positive and current is negative.

Fourth quadrant: voltage is negative and current is positive. 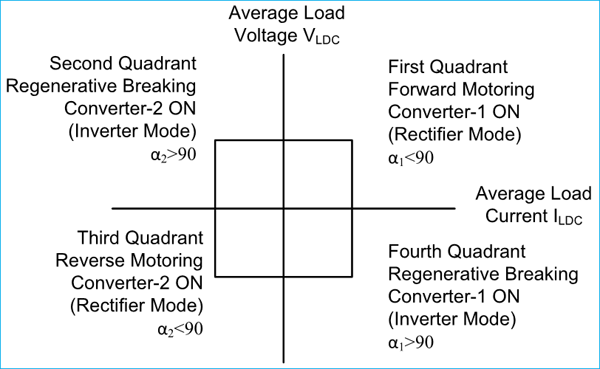 When power flow is from load to source, the motor behaves like a generator and this makes regenerative breaking possible. 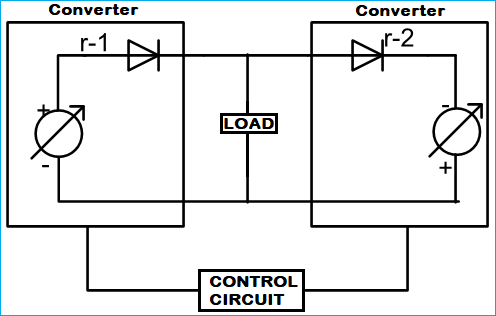 In the above circuit diagram, the converter is assumed as a controllable DC voltage source and it is connected in series with the diode. The firing angle of the converters is regulated by a control circuit. So, the DC voltages of both converters are equal in magnitude and opposite in polarity. This makes possible to drive current in reverse direction through the load.

Where α1 and α2 is the firing angle of converter-1 and converter-2 respectively. 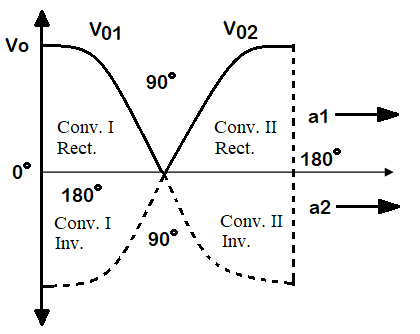 Practically we cannot assume both converters as an ideal converter. If the firing angle of converters are set in such a way that ⍺1 + ⍺2= 180⁰. In this condition, the average output voltage of both converters are same in mmagnitude but opposite in polarity. But due to ripple voltage, we cannot exactly get the same voltage. So, there are instantaneous voltage difference at the DC terminals of the two converters which produce enormous circulating current between the converters and that will flow through the load.

The pulses to the converter-2 are applied after a delay time. The delay time is around 10 to 20 msec. Why we apply delay time between the change of operation? It ensures reliable operation of thyristors. If converter-2 trigger before the converter-1 has completely turned off, a large amount of circulating current will flow between converters.

C) Converter selection by both control voltage and load current

The advantage of this scheme is that we can get smooth operation of the converter at the time of inversion. Time response of the scheme is very fast. The normal delay period is 10 to 20 msec in the case of circulating current free operation is eliminated.

According to the type of load, single-phase and three-phase dual converters are used. 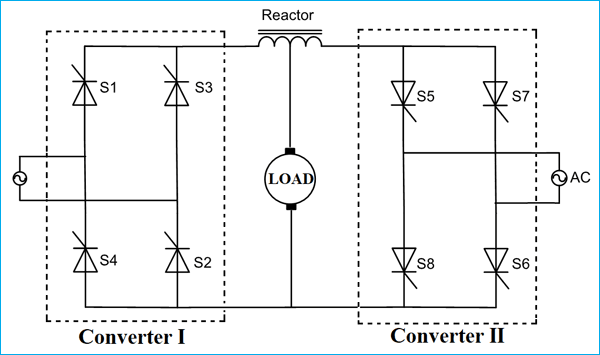 The firing angle of converter-2 is 180 - α1 = α2 and α2 is greater than 90˚. So, converter-2 act as an inverter. In this operation, the load current remains in the same direction. The polarity of the output voltage is negative. Therefore, the converter works in the fourth quadrant. This operation is known as regenerative braking.

For reverse rotation of DC motor, converter-2 act as rectifier and converter-1 act as an inverter. The firing angle of converter-2 α2 is less than 90˚. The alternative voltage source supplies the load. In this operation, the load current is negative and the output average voltage is also negative. Therefore, the converter-2 works in the third quadrant. This operation is known as the reverse motoring.

The waveform of the single-phase dual converter is as shown in the below figure. 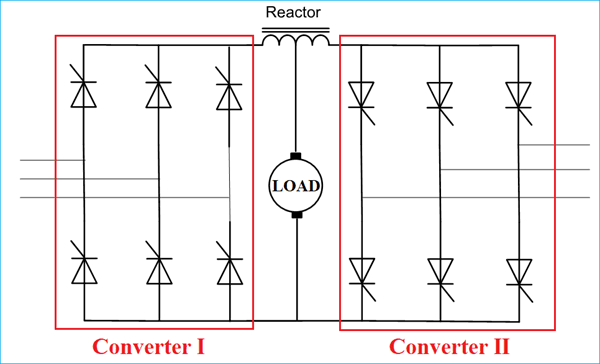 So this is how Dual Converters are designed and as already told they are generally used to build reversible DC drives or variable speed DC drives in high-power applications.