The future is a connected world and IoT is predicted to connect billions of devices in a decade and transform into an industry worth trillions of dollars. To achieve these numbers, the technology should become highly scalable — connecting a huge number of devices over large distances with low cost and less maintenance. But how to make it scalable? LoRaWAN® is here!

Carry a heavy backpack, you run minutes and meters. Carry only the essentials in a pouch, you run for hours and kilometres. Similarly, LoRaWAN technology helps IoT devices communicate to devices that are tens of miles apart and last over 5-10 years on battery — carrying only the required data. Breaking the limitations of traditional networking technologies — LoRaWAN breathes life into large-scale IoT applications. Through LoRaWAN + IoT combination, we can build smart cities and can even extend connectivity to an entire nation!

LoRaWAN is unlicensed and open standard — in contrast to cellular networks — and has no monopoly. India is getting ready to embrace the smart transformation with a big vision from both Governments and businesses along with policies being announced. But to translate them into action that brings change, India needs a powerful LoRaWAN and IoT Ecosystem .

The Things Conference India is all about building a bigger, better and stronger IoT and LoRaWAN ecosystem in India. Happening on Oct 18th and 19th at HICC Hyderabad, this Asia’s largest conference on LoRaWAN brings together CEOs, CTOs, governments, industry leaders, startups and tech-enthusiasts to share the knowledge and explore future possibilities in IoT with LoRaWAN.

The global IoT & LoRaWAN industry’s leading companies like Microchip, MultiTech, The Things Industries, RAK Wireless and many are supporting this conference. Stalwarts of the global and Indian IoT ecosystem will speak at the conference regarding various aspects of future technology LoRaWAN.

With expert talks and open & exclusive workshops from industry leaders around the world, the conference is a knowledge powerhouse for smart technologies. Whether to explore LoRaWAN’s applications or to deep dive into the technology — the conference caters to all from beginners to experts to industrialists.

The conference also hosts a government pavilion and a startup pavilion to discuss solutions and explore business opportunities for building a smart India. The Things Conference India 2019 will be a springboard for anyone to fast-track into future technology and grab the plentiful opportunities it presents. Students, developers, startups, governments, corporate, businesses, there’s so much for everyone. Reserve your seat at https://www.thethingsconference.in/ 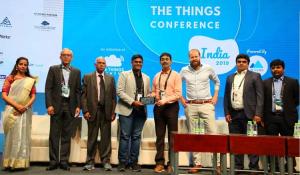