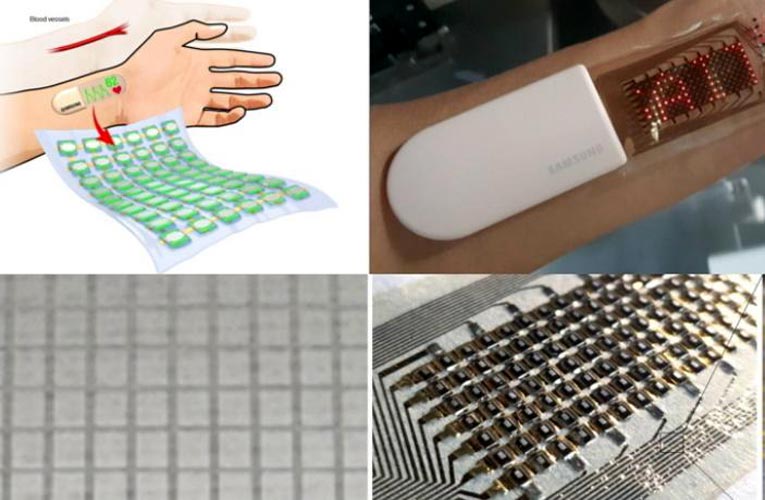 A team of researchers from Samsung Advanced Institute of Technology (SAIT), Samsung’s R&D hub has developed an OLED skin display with a built-in heartbeat sensor that can be stretched by up to 30%. When tested by attaching it to the inner wrist near the radial artery, it was observed that it picked a heartbeat signal that was 2.4 times stronger than what would be picked up by a fixed silicon sensor.

The stretchable OLED skin display and a photoplethysmography (PPG) sensor integrated into a single device can measure and display the user’s heart rate in real-time, thus creating the ‘stretchable electronic skin’ form factor. The team modified the composition and structure of elastomer, which is a polymer compound with superb elasticity and resilience.

As put in by the principal researcher, Youngjun Yun, this stretchable technology will enable users to measure their biometric data for a longer period and there is no need to remove the solution when the user goes for sleep or exercise as the patch feels like part of the user skin. Additionally, users can check their biometric data right away on the screen without having to transfer it to an external device. Furthermore, he added that this breakthrough technology can also be expanded to use in wearable healthcare products for adults, children and infants, and patients with certain diseases.

The stretchable sensor was made in a way that makes continuous heartbeat measurements possible with a high degree of sensitivity compared to existing fixed wearable sensors. The solution does this by facilitating close adhesion to the skin, which minimizes performance inconsistencies that can be caused by movement.

The research done by the SAIT team is still in the early stages, but the team aims to realize and commercialize stretchable devices by increasing system resolution, stretchability, and measurement accuracy for making mass production possible. Additionally, the team plans to incorporate stretchable sensors and high-resolution freeform displays to enable users to monitor things like peripheral oxygen saturation, electromyogram readings, and blood pressure.