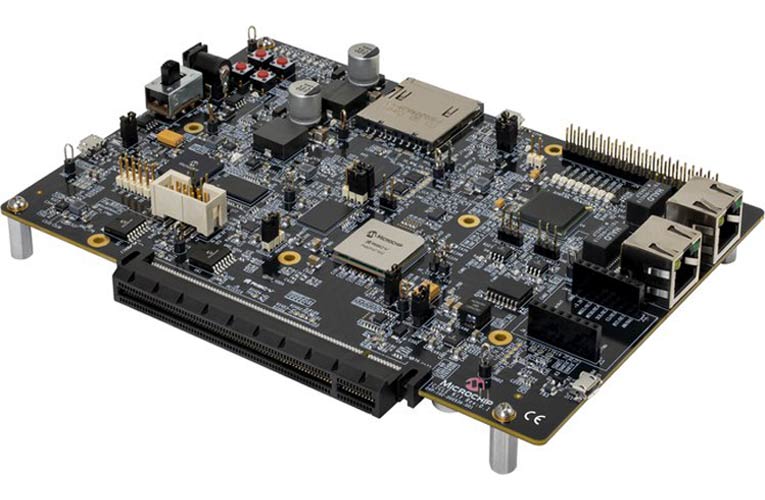 The Icicle Kit is based on Microchip’s PolarFire SoC (MPFS250T-FCVG484EES), which is a system-on-chip that combines the state-of-the-art PolarFire FPGA with a five-core RISC-V microprocessor subsystem by SiFive. FPGA resources including a non-volatile fabric with 254l logic elements, 784-unit math block, and four 12.7Gb/s serializer/deserializer (SERDES) ports make it ideal for developing cutting-edge applications. There's 2GB of LPDDR4 onboard, 1Gb of SPI flash storage, and an 8GB eMMC.

As stated by the company, the Icicle Kit and its robust Mi-V ecosystem of tools enable users to develop cutting-edge applications in embedded machine learning, wired networking, industrial automation, or simply exploring RISC-V and FPGAs.

Fully supported in Microchip's Mi-V ecosystem, the board offers an official toolchain made up of various projects including Yocto Linux, BuildRoot, and FreeBSD on the operating system side, FreeRTOS and Zephyr for real-time operating system (RTOS) users, GCC and IAR compilers, and development tools like Renode and Libero. The PolarFire SoC Icicle Kit however requires a Libero Silver license which is free of charge and valid for one year.

The mass production of the boards has already begun and the boards will be shipped to customers in mid-September 2020. Each board wears a price tag of $489 and the end-users who buy the board through the Crowd Supply are charged $499 ($10 is charged extra for US domestic shipping costs).