How Top OEMs Escalated Investment in Semiconductors by 25.2%; Explains Gartner

In 2021, Apple’s spending has escalated by 26 percent that helped it to grab the 11.7 percent market

The global technology and consulting research firm Gartner has now stated that the chip spending has been augmented by 25.2 percent by the top ten original equipment manufacturers (OEMs), which also resulted in 42.1 percent of the total market share in 2021. This escalation has been witnessed even though chipset production was slumped in spite of the COVID-19 outbreak. Semiconductor chips like the microcontroller units, general-purpose logic integrated circuits (ICs), and a vast range of other application-specific semiconductor's average selling prices (ASPs) have been uplifted by around 15 per cent or more than that in 2021. 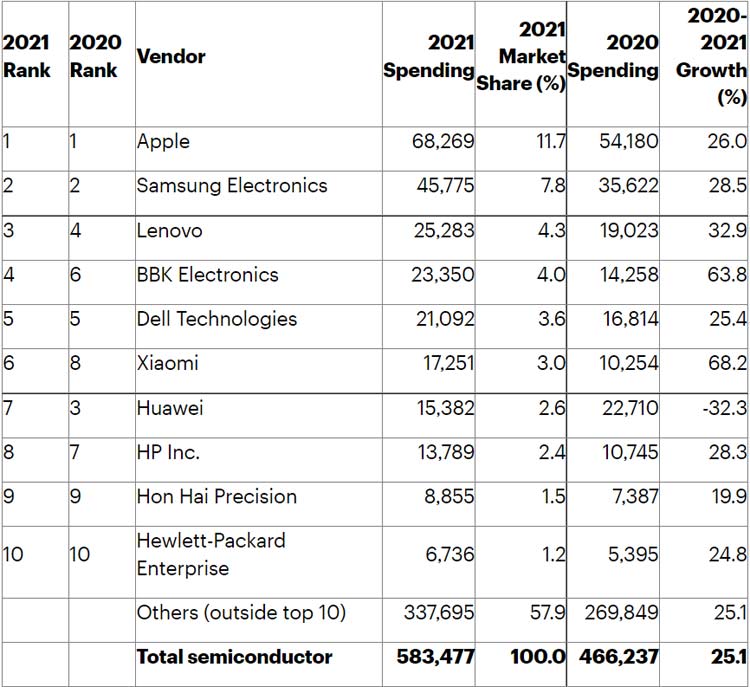 Since 2011, the Cupertino tech giant Apple and South Korean tycoon Samsung have topped the OEMs ranking, while at the same time, these firms' rankings are exchanging all through the years. In the end of 2021, Chinese giant Huawei struggled financially to purchase chipset and hence, its ranking dropped from third to seventh.

Masatsune Yamaji, research director at Gartner, told the media, "Semiconductor vendors shipped more chips in 2021, but the OEMs’ demand was far stronger than the vendors’ production capacity. The semiconductor shortage prevented OEMs from increasing production not just of vehicles but also various electronic equipment types, including smartphones and video game consoles. However, the chip shortage significantly increased selling prices, which meant OEMs spent much more on semiconductor procurement in 2021 than in prior years."

This year Apple’s spending has escalated by 26 percent that helped it to grab the 11.7 percent market. In 2021 itself, the company escalated its investment on on-memory chips by 20.2 percent and on memory by 36.8 percent. The point to be noted is that as the tech giant has now started focusing more on manufacturing in-house processors, its sales and demand for computing microprocessing units (MPUs) has decreased significantly. Rivals such as Xiaomi and BBK electronics, successfully augmented their investment in semiconductors, mostly due to the market share loss by Huawei in the smartphone segment.

In 2021, Samsung Electronics, which grabbed the second spot in market share with 7.8 percent, has successfully increased its investment by 28.5 percent. The report further added, “The increase of memory spending was the result of not just a rise of memory price, but also Samsung’s growth in its target electronic equipment markets, especially the smartphone and solid-state drive (SSD) markets,