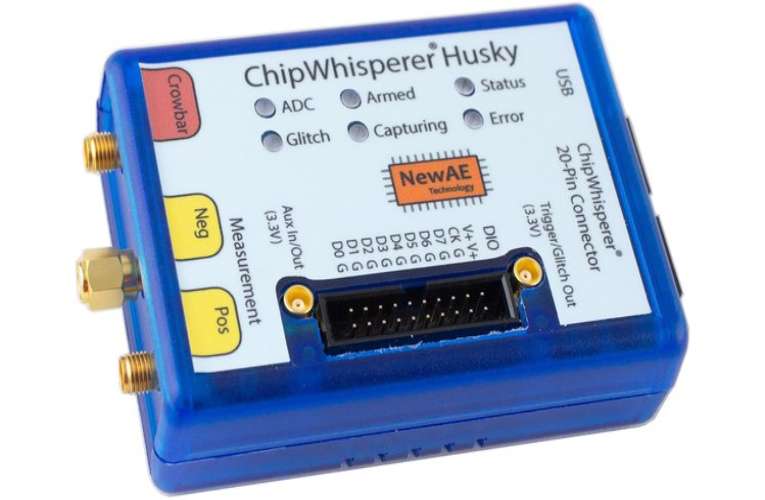 NewAE Technology, a Canadian security research firm is set to launch ChipWhisperer-Husky, a new compact device specially designed for experimenting with side-channel power analysis and fault injection. It will soon be available on the Crowd Supply and compared to its previous models, it will come with new features such as additional I/O expansion pins, high-speed logic analyzers (to visualize glitches), and even real-time data streaming for attacking asymmetric algorithms.

Side Channel Power Analysis is a non-invasive attack on portable embedded devices, where the attacker leaves no trace of the attack. It is done to extract the cryptographic keys and other confidential information from the device by monitoring the power consumption. It can be a Simple Power Analysis involving just visualization of current graphs to more complex attacks like a High-order Differential Power Analysis. Fault injection is also a technique to disrupt functioning by injecting fault in a system causing the target to behave abnormally to aid the attacker. It is used to extract cryptographic keys or disturb the operations.

This module offers the best of both worlds, in terms of architecture and features it is based on ChipWhisperer lite but also contains features only available in the more expensive Chipwhisperer Pro series. In terms of capability, it falls somewhere in between the two series while boasting a newer Artix A35 7-Series chip. Compared to the existing chips present in the predecessors having FPGA-6, this new chip has almost 2X logic, 2.5X block RAM, 5.7X more DSP slices. 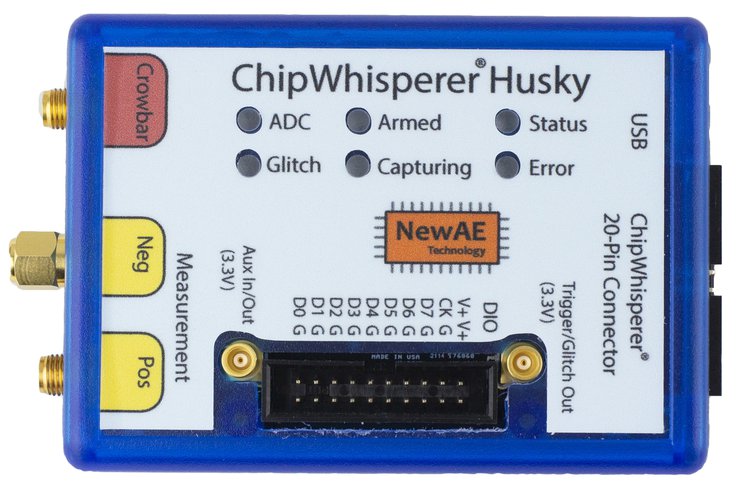 Previously, on Twitter, the CTO and creator of NewAE Technology said that it will be available at around $500, which makes it much more affordable than the pro series which retails at around $3800 making it very lucrative package overall. On contacting him for the release plan, he said “We were planning on launching this shortly (early September), but depending on how stock level predictions are looking, this might yet change. Right now we have stock for a small run, but with the Crowd Supply campaign, it would be preferable to deliver as many as possible, early (end of 2021 was the original goal).”

Unlike the previous models, the ChipWhisperer Husky has a hardware design that is not completely open. On asking Dr. Colin, the reasons behind keeping the hardware designs closed, his response was “For the CW-Husky, we decided to leave everything open that one needs to fiddle with the design - the FPGA sources, the firmware for the microcontroller, and schematic. These can even be ported to other hardware (similar to the goal of the CW-Lite), which is I think the most important part of open source".

He further added: “In working with the community, we realized that hardware being accessible also means you can actually get it - we've seen over the years many open-source designs that weren't available for purchase, and it tends to limit the accessibility since it means someone newer to hardware isn't able to build it themselves. With CW-Husky, we're trying to extend our lessons learned, by making it "widely available", which in practice means it needs to have some commercial aspects (like keeping manufacturing portions closed-source).”

If you want to dive deeper into the field of embedded security, and get hands-on knowledge about side-channel power analysis and fault injection, then this upcoming product, soon to be released on Crowd supply, can be a perfect tool for you.