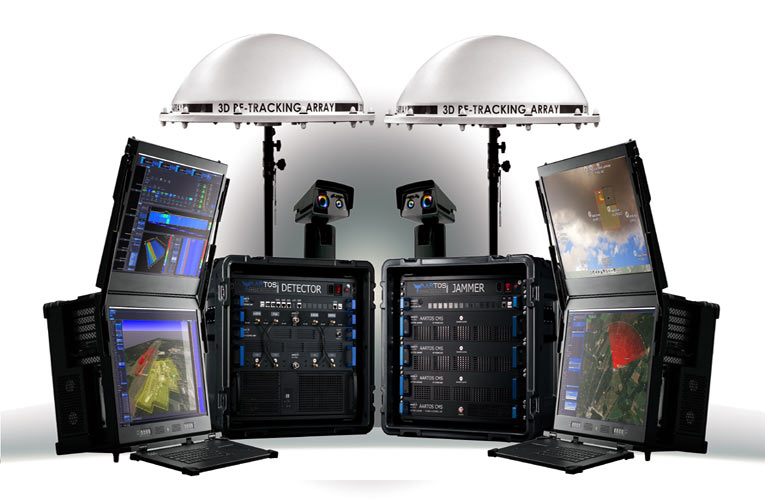 Saelig has introduced the Aaronia AARTOS Drone Detection System that can sense airborne drone activity with a virtually unlimited detection range. With the ability to monitor the entire frequency spectrum (100MHz-20GHz) hundreds of times per second with 360° dome coverage for airborne activity the AARTOS DDS is fully customizable based on the application and situation.

The DDS system may take between 10μs to 500ms to detect a drone, the time depends on the configuration and the number of IsoLOG 3D DF antenna arrays. It can detect the drone immediately after the operator establishes a radio link and the process of pairing, radio link, take-off, and climb usually takes between 30 seconds and five minutes depending on the drone model. This allows the DDS system to provide an early warning, even before the drone takes off, it can also detect the location and movement of the drone operator even if the drone and the operator are operating at different frequencies or bands. With two systems, it is possible to accurately estimate the distance of the drone, and an AARTOS DDS system with two or more antennas can also estimate the drone's altitude.

The AARTOS DDS can be configured as a portable or mobile system, or a fixed station with an unlimited number of sensors to form a network covering large areas, and there are no inherent limitations in terms of altitude and elevation. All systems can be linked to a single monitoring center with remote-control for each setup.

The latest V6 generation device can detect a DJI Phantom 4 FCC drone even if it is more than 50km away, the specific range depends on drone type and topography. By using the AI techniques, the DDS system can differentiate drones from other airborne object and it does not emit any radiation that could interface with other infrastructure.

Since the commercial and custom drones can connect at any frequencies, the AARTOS DDS system is designed with an all-band monitoring receiver and ultra-wide-band tracking antenna to sense the complete frequency. When mounted on a vehicle, the AARTOS DDS resembles a common TV or a satellite antenna.