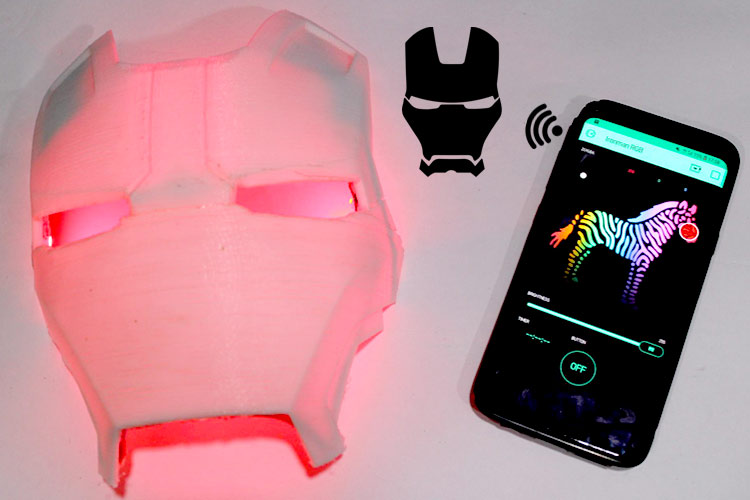 Avengers Assemble! Who does not like the Marvel Cinematic Universe? So, today we have a great project for you people that is a Wi-Fi-controlled Ironman mask. These days evolution and adaptation of 3D printed tools have seen a great increment for a plethora of purposes. We brought the use of a cool 3D printed design to make it into an Ironman mask that can be controlled over the Internet. The project includes basic components and can perform multiple functions such as a color switch, simple ON/OFF, timer control, and a brightness equalizer for the LEDs using the Blynk application.

As we all know how popular 3D printed techniques are these days, just getting those techniques into. Although 3D printers can be used to design some really helpful stuff, we can also use them in order to improve the aesthetics and make some nifty products. Using basic circuits and implementing the circuits over Perfboards to make Ironman lights glow. The project that we build today could be used as a collectible showcase item for your home or workplace. So get ready and let's begin! 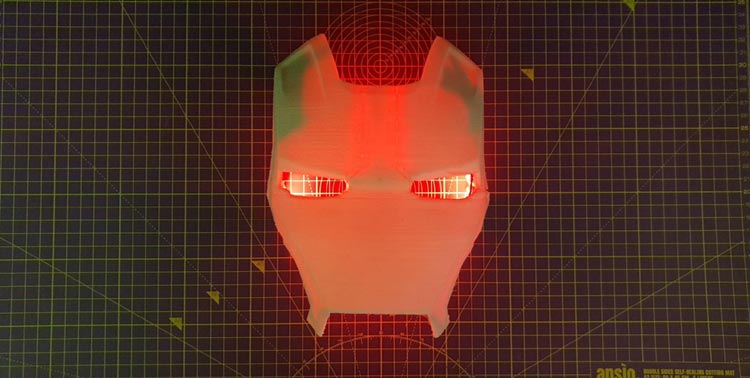 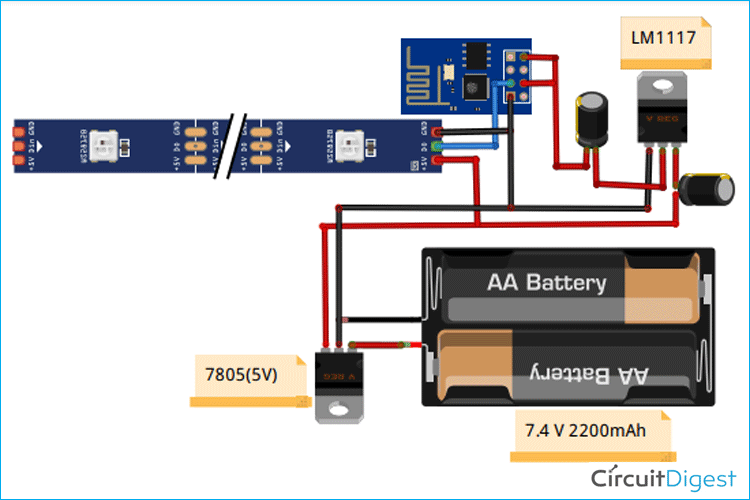 Here, you can see my complete setup of the Ironman mask. The wiring has been done along the borders of the mask in order to prevent any shadow from the components or wires. You can place the components in a similar fashion if you wish to. 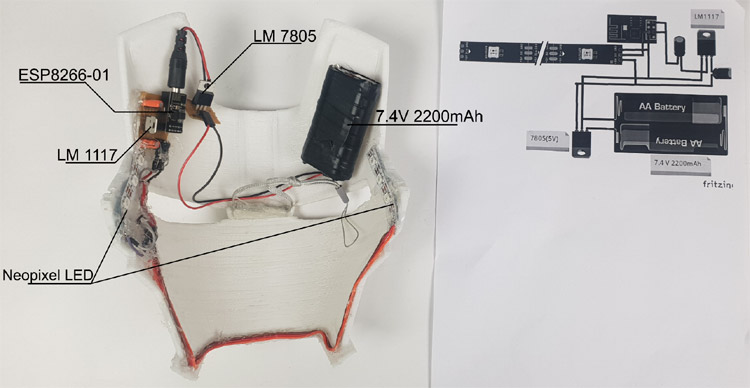 Blynk is an IoT-based platform focused on making IoT simpler for developers like us. Blynk allows us to build graphical interfaces by which we can control or visualize our data just by dragging and dropping different widgets available in the application itself. Using different Blynk libraries you can connect over 400 hardware models to their cloud (the hardware includes; Raspberry Pi, Arduinos, Node MCU, etc.) Blynk app is available both on Android as well as iOS. Any hardware can be connected to the Blynk cloud over the internet with the connectivity available on the hardware such as ESP, Ethernet, Wi-Fi, etc. The images below showcase the setting up of the Blynk app over an Android smartphone.

You can also make your own local server for Blynk over Raspberry Pi. You can follow this project link if you are interested. 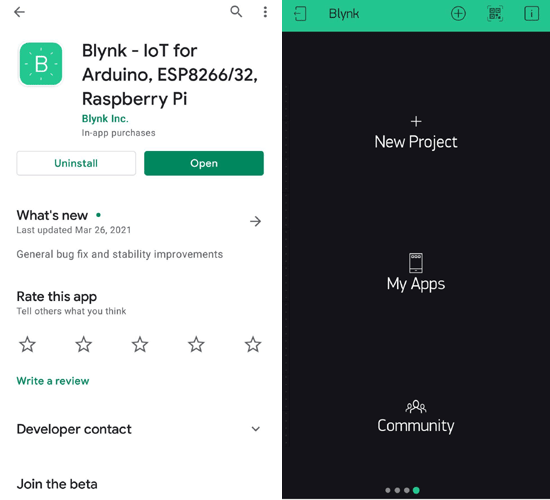 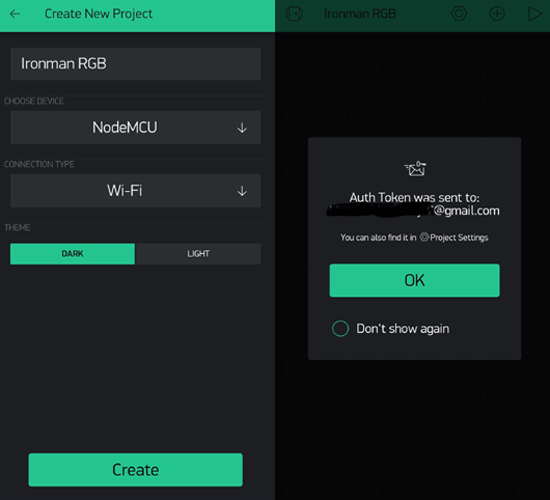 Open the project in Blynk, click on the “+” sign where it will show many widgets. In our case, we need an RGB Color Picker which is listed as “zeRGBa”, a button, a slider, and a timer that will be used for different operations of the LED strip. 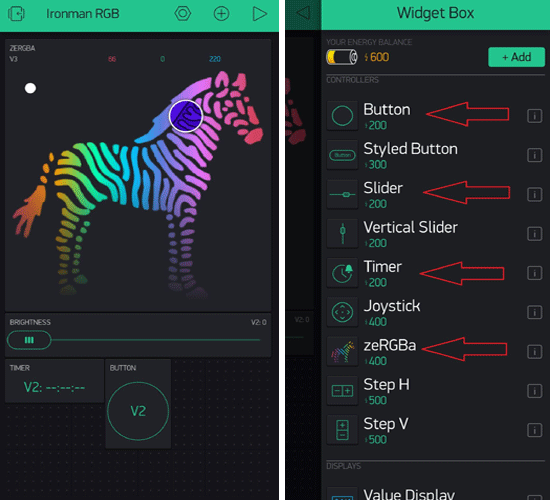 Setting up the Widgets:

Setting up instructions for the Blynk Widgets:

You can follow along with the images attached below and set up the widget settings for your own GUI using the blynk application. The settings for the buttons, zeRGBa, Timer, and slider are given below, where virtual pins (V2, V3) along with the range are defined below. 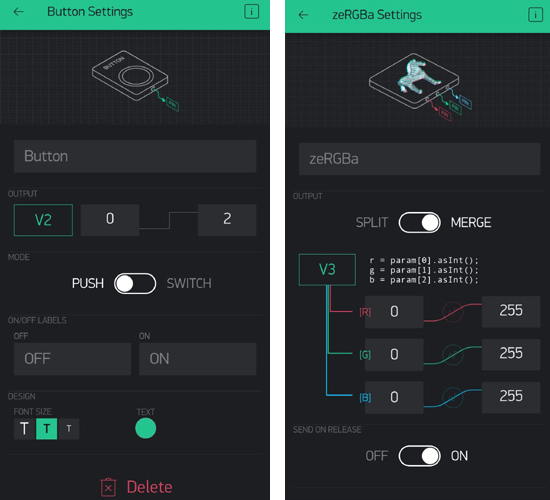 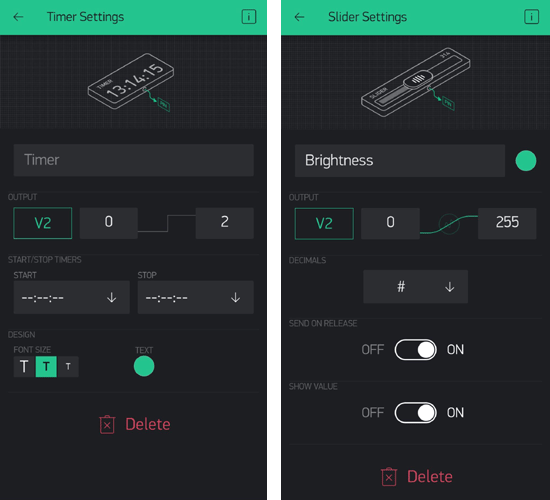 Once you have these settings done in your blynk app, you can press the “play arrow” key on the top right of the screen and use your widgets. You can simply add other widgets available in the blynk library by pressing the “+” sign and further defining the virtual pins and the range to them.

→ How to get the authentication code?

Once you click on ‘CREATE’, you will get the authentication code for the Blynk project on the email Id you have registered with.

To learn more about the Blynk app, follow this link.

Libraries to be installed before running the code:

FastLED.h library: The FastLED library is for efficiently controlling multiple LED chipsets including Nexopixel, Dotstar, WS2801 by Sparkfun, and more. This library also includes multiple functions of performing 8-bit calculations to manipulate the RGB values and also low-level classes for abstracting out access to SPI hardware and pins and still keeping it very fast.

BlynkSimpleEsp8266.h is a library that needs to run the blynk application over wireless network devices and helps it to communicate with the ESP module

Once the libraries are installed, we can begin coding by including all the necessary libraries and defining the input and output pins.

After including all the libraries and defining the pins and the ports, it is now time to enter the Blynk and Wi-Fi credentials like auth token and the Wi-Fi name and password for the Wi-Fi to which ESP-01 should connect with. The blynk authentication code (char auth[ ]) can be obtained from the email ID you’ve registered with.

Inside the loop() function, Blynk.run() is there to check for the incoming commands from Blynk Graphical user interface (GUI). The incoming string is then saved into a variable and using the ‘if’ condition, the operations are executed accordingly.

Working with the Setup

Once we have placed all the components and uploaded the code to the ESP board, we can now plug in the power supply. Once the setup is on, it should get connected to the mobile or the device with the Blynk application whose wireless network credentials are mentioned in the code. Once you have set up the whole application with the widgets including ON/OFF switch, RGB Spectrum, Brightness equalizer, and the timer. You are now ready to use the functions and customize your Ironman mask wirelessly using IoT.

I tested the project, and it worked very well for me. I was able to control the brightness of the Neopixel LEDs, change the colors of the LED, I was able to switch the LEDs ON and OFF, and even set a timer to turn on and off the LED strip inside the Ironman mask faceplate. This custom mask is a very helpful and aesthetic showpiece for the room or workplace. I will hang it on the wall and amaze people with how it works wirelessly. Hope you guys enjoyed this project and learned something new. If you have any questions regarding this project, please put them in the comment box below or post your queries to our forum.

You can also check out another similar project of controlling a WS2812B RGB LED Matrix using Arduino and blink at Circuit digest.

A huge shout out to the designer of this Ironman mask design, if you wish to check it out and make your own 3D printed version, kindly check the Thingiverse link and download the STL files and print your own Ironman faceplate.

You can watch the whole video of the project for a better understanding.