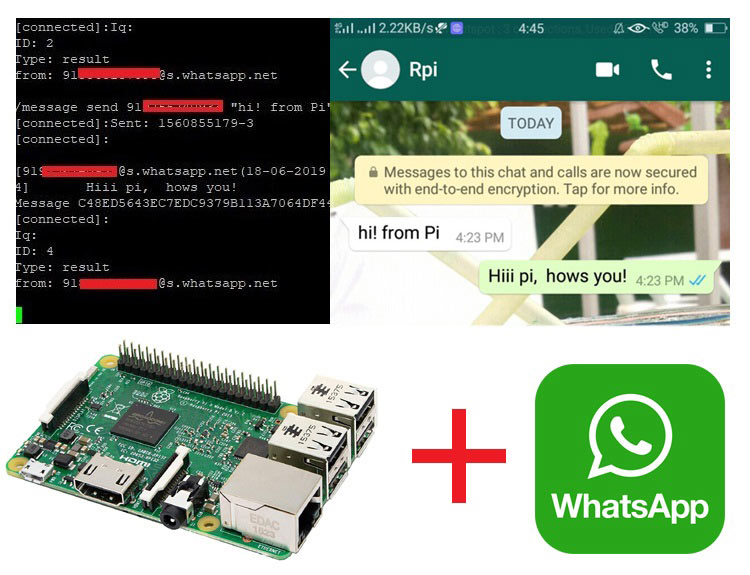 WhatsApp is one of the most popular and widely used messaging app but its only available for Smartphones and don’t work on computers. But there is a way to install it on palm sized computer Raspberry Pi and it works quite well using command line interface.

There is a Python library to access all capabilities of an official WhatsApp on Raspberry pi - Yowsup. It enables you to use your WhatsApp account to exchange messages without the original app with your contacts. This library allows the user to create a full-fledged custom WhatsApp client on Raspberry Pi.

For activating the WhatsApp on pi, you will need a new Phone no. as it won’t work with currently running WhatsApp no. So unfortunately for configuring Yowsup we still need a phone and a SIM card, but after the first step you can leave it alone.

So, let’s get started.

1. First thing that we have to do is update and upgrade our Pi. It is good practice to update the Pi before installing any new library or package so that you can be sure to have most recent library. Run the below command to perform the update.

Hit ‘y’ wherever ask for yes/no and wait for completion.

Now, install cryptography packages (required for encrypting the data used in WhatsApp) which is already installed in our Raspberry Pi but the version is not compatible as required by Yowsup library.

3. Download the Yowsup library from GitHub using below command

5. Now, we are ready to setup the WhatsApp account. First check whether the library is installed correctly or not. For this, run the given command

If you are getting the below output then library is installed correctly.

After installing WhatsApp on Raspberry Pi, its time to activate and configure the WhatsApp on pi.

1. Save the country code “cc” and phone number in a file so that Yowsup client can fetch this information for authorization. Open nano editor using sudo nano config and save the info using ctrl+x as shown below.

91 is the cc for India if you are outside of India use your cc and replace phone with your phone number. Make sure the phone number entered is not used by another WhatsApp account and the SIM card should be in phone because you will receive registration code in next step.

After running the above command you will receive the six digit code through an SMS. 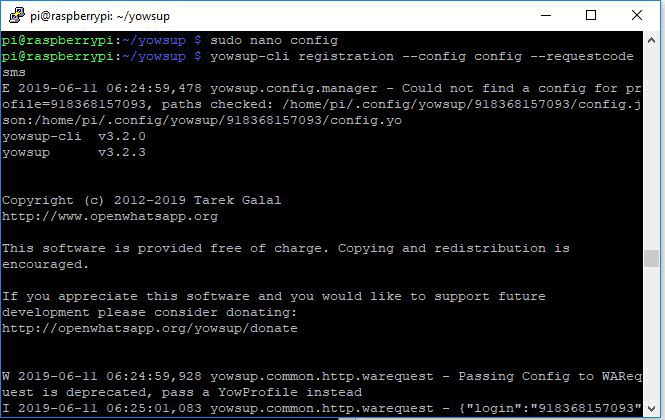 3. Use that code to register the phone number using the command

Replace xxx-xxx with the code you received on your phone.

After a second or two, you'll receive a response from WhatsApp on the Pi terminal as shown below 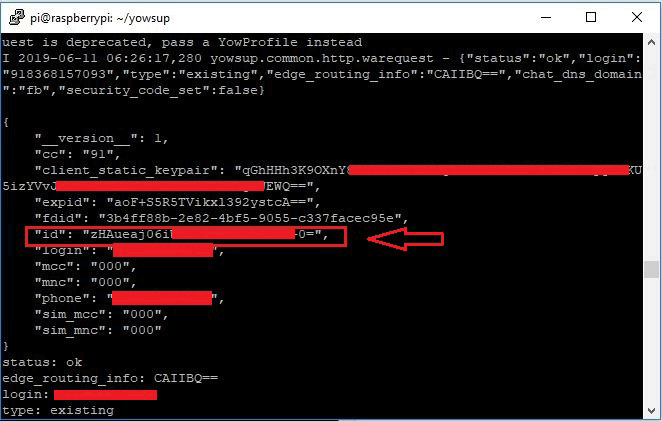 The response contains the password for your WhatsApp. The ID, shown by the arrow in above image, is your password without double quotes. Save this password in the same config file.

So, open the config file using nano editor and paste the id as

Now, config file will look like this. Save this file. 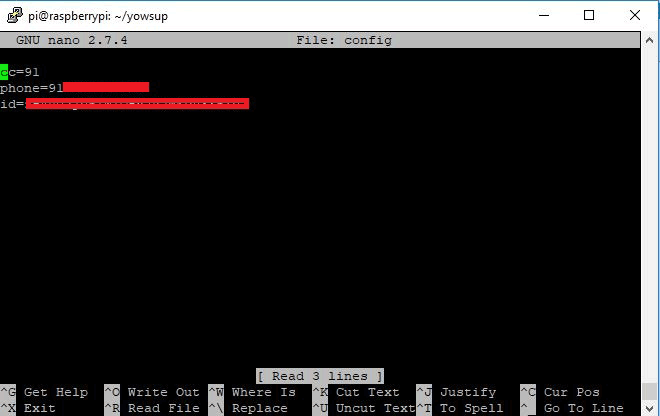 Running the WhatsApp on Raspberry Pi

1. Now, we are all set to launch WhatsApp on Raspberry Pi. Run the below command to start the WhatsApp.

You will see following response from WhatsApp. We have to login now. Enter “/L” and hit enter. For exploring more commands you can type /help. 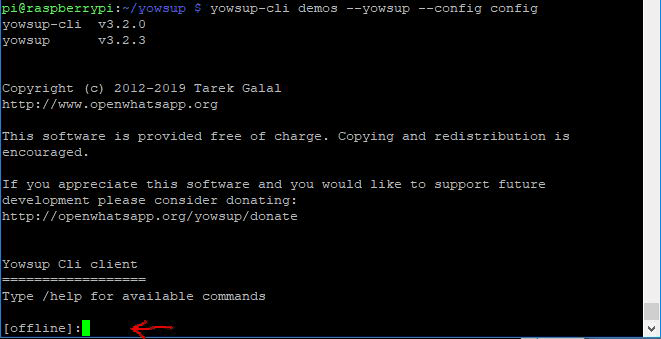 If you are failed to login, restart your Raspberry Pi.

2. After login you are all set to send and receive messages.

For sending message to other WhatsApp number type the following command.

Replace ********** with the receiver WhatsApp number. Sent and received messages will be shown on the same terminal as shown below. 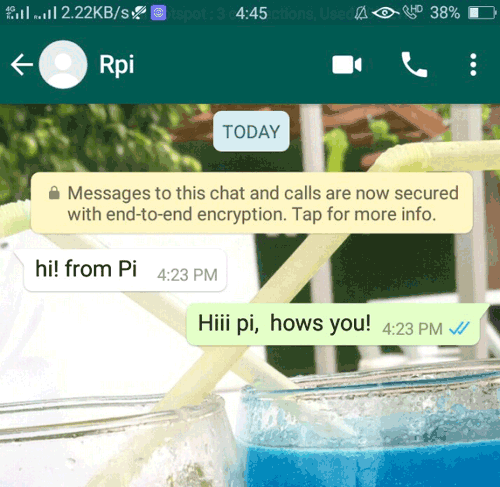 So this is how the Raspberry Pi can be converted into a WhatsApp client to send and receive messages from another WhatsApp number. We can also implement the Home Automation using WhatsApp messages but the Yowsup library is not working properly for that purpose and the improvement is going on to use this functionality .

"how to install whatsapp on

"how to install whatsapp on raspberry pi" procedure

returns message in terminal on instruction as follows   ===>

This software is provided free of charge. Copying and redistribution is
encouraged.

If you appreciate this software and you would like to support future
development please consider donating:
http://openwhatsapp.org/yowsup/donate

all with same error.

Any idee if syntax instruction has been changed recently ?

Is your procedure recent.

I have a problem ( bad param)

I have a problem ( bad param)

when I put my parameter could anyone help me

I can´t setup my raspberry 4 (raspbian) with whatsApp, each time i try the message "old version" is raised.

I made every step showed in this article and all was ok until the last.
Don´t know how to fix the error or how to follow with installation.
Anybody have an idea how to continue,
I apreciate any indication in this matter, many thanks

i have the same error @Héctor

i have the same error @Héctor Guajardo T.

i am facing same issues: b

i am facing same issues: b'old_version

Hi, i have followed every…

i have followed every step but i am getting following error when i am trying t0 run  pi@raspberrypi:~/yowsup $ yowsup-cli

I have checked that all dependencies are installed. Does anybody has a clue ?